The payment model that charges no fees or interest - unless you miss an instalment.

It’s the week before payday and you’re a bit short on funds. Not enough to justify a loan, but enough to need funds to make it through the next week. Or the sneakers you have been waiting six months for are on sale for the next five days only. While most financial advisers would tell you to try to survive without borrowing funds, sometimes you may need an extra R1,000 for groceries in that last week before payday. Taking on credit and paying interest on it is probably the worst way to address your shortfall.

However, in the past two years options have increased with a new “buy now, pay later” (BNPL) model. The idea is that you would literally buy now and only pay later, but it is not structured as a credit product, and you do not pay any interest. However, if you do miss any payments, you will have to pay a penalty. Paul Behrmann, founder and chief executive of Payflex, says the key difference is that this is not a traditional lending product with fees and interest charges.

“Typically, payments are structured over a six-week period. So, with Payflex, you would pay the first 25% today, the second 25% in week two, the third 25% in week four and the final 25% in week six. You can’t stretch the repayments to six months or a year. This matches with global models, which tend to stick to a six-week repayment period. The idea is that ‘buy now, pay later’ products are designed to meet a short-term need and to be repaid over the short term,” he says. If you miss a payment, you do have to pay a penalty. Payflex has capped the late-payment fee at a flat R195, whereas PayJustNow has capped it at 25% of the total purchase price.

According to the market research report South Africa Buy Now Pay Later Business and Investment Opportunities (2019 – 2028), the adoption of BNPL increased by almost 31% in SA during 2020.

While it is still a relatively new concept in South Africa, the BNPL model has been used in other countries for some time. Peter Thompson from the Financial Rights Legal Centre in Australia cautions that these products are typically unregulated and there is no affordability assessment. Since they are not credit products, they do not fall under the National Credit Act, but you may be covered by the Consumer Protection Act.

Digital banking disruptor TymeBank offers a BNPL solution called MoreTyme, which allows you to purchase items from participating merchants by paying 50% of the cost on the day of the purchase and the balance of the purchase is payable over the next two months, interest-free. Participating merchants include Pick n Pay, Pick n Pay Clothing, Geen & Richards and Supa Quick. The bank also recently entered into a partnership with The Foschini Group (TFG), which includes Foschini, Jet, @home, Exact, Markham, Duesouth, Sterns, Totalsports and Sportscene.

MoreTyme will be available in Jet stores across the country from November and will be rolled out to other stores in the TFG stable over the course of next year.

Other fintech start-ups offering a BNPL payment method include PayJustNow and ZeroPay.

Behrmann says the target market for these products would typically be the person who already has access to credit via a credit card and/or an overdraft, but to avoid paying interest charges on a single purchase, they would rather spread out their payments over the short term. It differs from a lay-by arrangement in that you get the product immediately, before paying the outstanding payments. With a lay-by arrangement, you would only receive the goods once you make the final payment. For example, you could select the item you want on an online site such as Superbalist, and then click on the Payflex pay later option when you get to the payments screen. A purchase of R1,595 on Tuesday, 2 November was structured as follows with Payflex: a payment of R398.75 immediately, followed by payments of R398.75 on 16 November, 30 November and 14 December. You have to supply your bank details and your account is debited by Payflex on those dates. You then enter your identity number and a one-time pin that is sent to your cellphone, then wait for the approval. Within seconds, your screen switches to one asking for your bank account details and you receive a notification from your bank asking you to approve the purchase. The amount you approve, however, is not the full purchase amount but the immediate payment of R398.75.

Behrmann says BNPL payment in SA is expected to grow by 66.9% annually to reach $294.1-million (about R4.4-billion) by the end of this year. “Online merchants are also experiencing higher average order values, larger purchases and significant revenue growth when they use BNPL. For this reason, BNPL is expected to support the growth of the e-commerce sector as more retailers start offering this method of paying,” he says. DM168 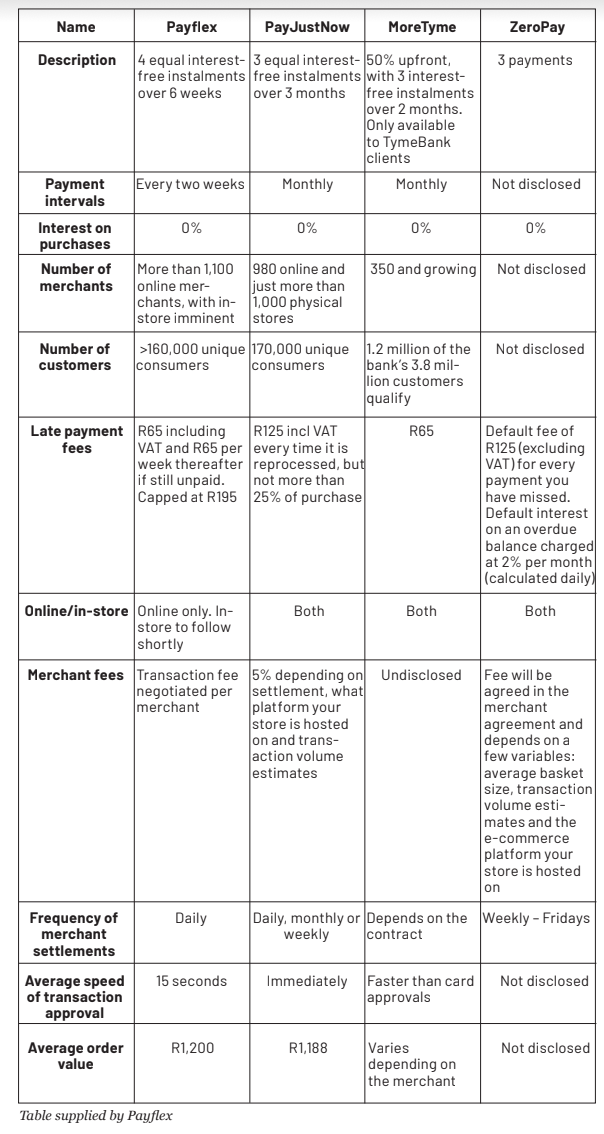