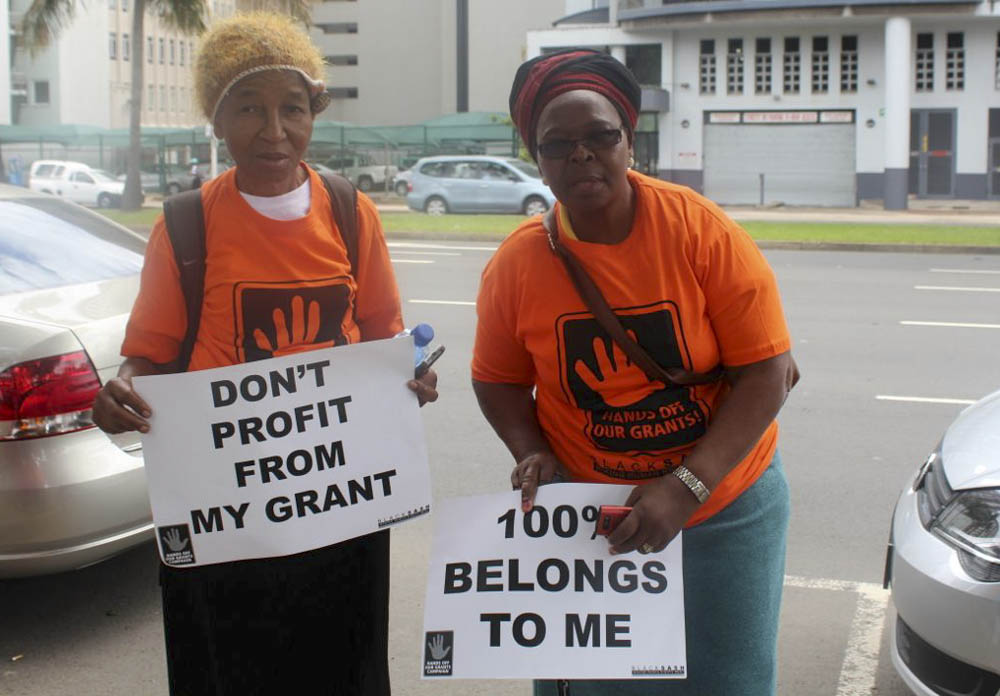 Black Sash has accused Moneyline of using social grants as collateral for loans.

The application against Moneyline Financial Services (Pty) for extending credit recklessly to consumers, who are mostly social grant recipients, has been scrapped. This means Moneyline may continue to provide loans and other services.

The National Credit Regulator (NCR) applied to the National Consumer Tribunal to have Moneyline’s registration as a money lender revoked. But in an unexplained turn of events last month, the NCR said that it had taken a decision to withdraw its application. The NCR did not respond to further questions about the reasons for its decision.

Moneyline made headlines about seven years ago when beneficiaries began noticing unexplained deductions, like airtime and life insurance policies, from their social grants. In most cases, the deductions occurred before they were able to access the funds themselves.

Moneyline is a Net1 subsidiary company. Another Net1 company, Cash Paymaster Services (CPS), was contracted by the South African Social Security Agency (Sassa) to pay social grants between 2012 and 2018. Net1 and its subsidiary companies were at the centre of social grant payment controversies and allegations of reckless lending.

A research report released in 2020 by human rights organisation Black Sash and the London School of Economics and Political Science found that systems set up by Net1 through CPS — while CPS was administering Sassa grants — created an environment in which lenders made low-risk loans to social grant recipients while charging them high-risk interest rates. (Moneyline has said that it doesn’t charge interest, only administrative fees.)

This environment enabled lenders to use grants as collateral for debt.

Investigations into Moneyline’s lending practices by the NCR found that Moneyline’s inclusion of child and foster child grants in its affordability assessments for customers contravenes the National Credit Act.

As part of its application to cancel Moneyline’s registration, the NCR referred Moneyline to the Tribunal in 2014 for reckless lending to recipients of child grants.

The Tribunal then ruled that the complaint was valid and that there were “good reasons” to investigate Moneyline. The ruling by the three Tribunal members was not unanimous.

Initially, Moneyline lodged an appeal application to the Tribunal’s 2016 ruling. The appeal, which the NCR opposed, was first heard on 4 December 2018 at the Pretoria high court. On 30 August 2019, the court ordered that the Tribunal be included as a respondent and the appeal hearing was postponed to 27 October 2021.

But when GroundUp contacted Lesiba Mashapa, NCR company secretary, for details about the hearing, he said that Moneyline had withdrawn its appeal and the NCR has also withdrawn its application to remove the company from the credit provider’s list. “The matter has been settled and the litigation between the NCR and Moneyline has therefore ended,” he said.

According to Tribunal registrar, Lucky Rabotapi, applicants like the NCR in this matter may withdraw their applications without providing a reason to the Tribunal. When parties reach a settlement outside Tribunal proceedings, the Tribunal only checks to ensure that the settlement is compliant with the law, he said. “There was no mention of a settlement to the Tribunal,” he said.

Meanwhile, Black Sash National Advocacy Manager Hoodah Abrahams-Fayker, said the organisation was disappointed that Moneyline had not been held accountable “for its predatory financial practices in the past, targeting social grant beneficiaries”.

She said they would continue to watch Moneyline.

Tiaan Jonker, director at Smit Sewgoolam Incorporated who are Moneyline’s attorneys said, “Moneyline is committed to providing lending solutions in full compliance with the National Credit Act in its chosen market of the underbanked and underserved consumers and merchants in South Africa.”

We first contacted the NCR on 27 October. The NCR promised to respond but had not done so by the time of publication. DM