Blocktober activists take the fight against GBV to the mountain top 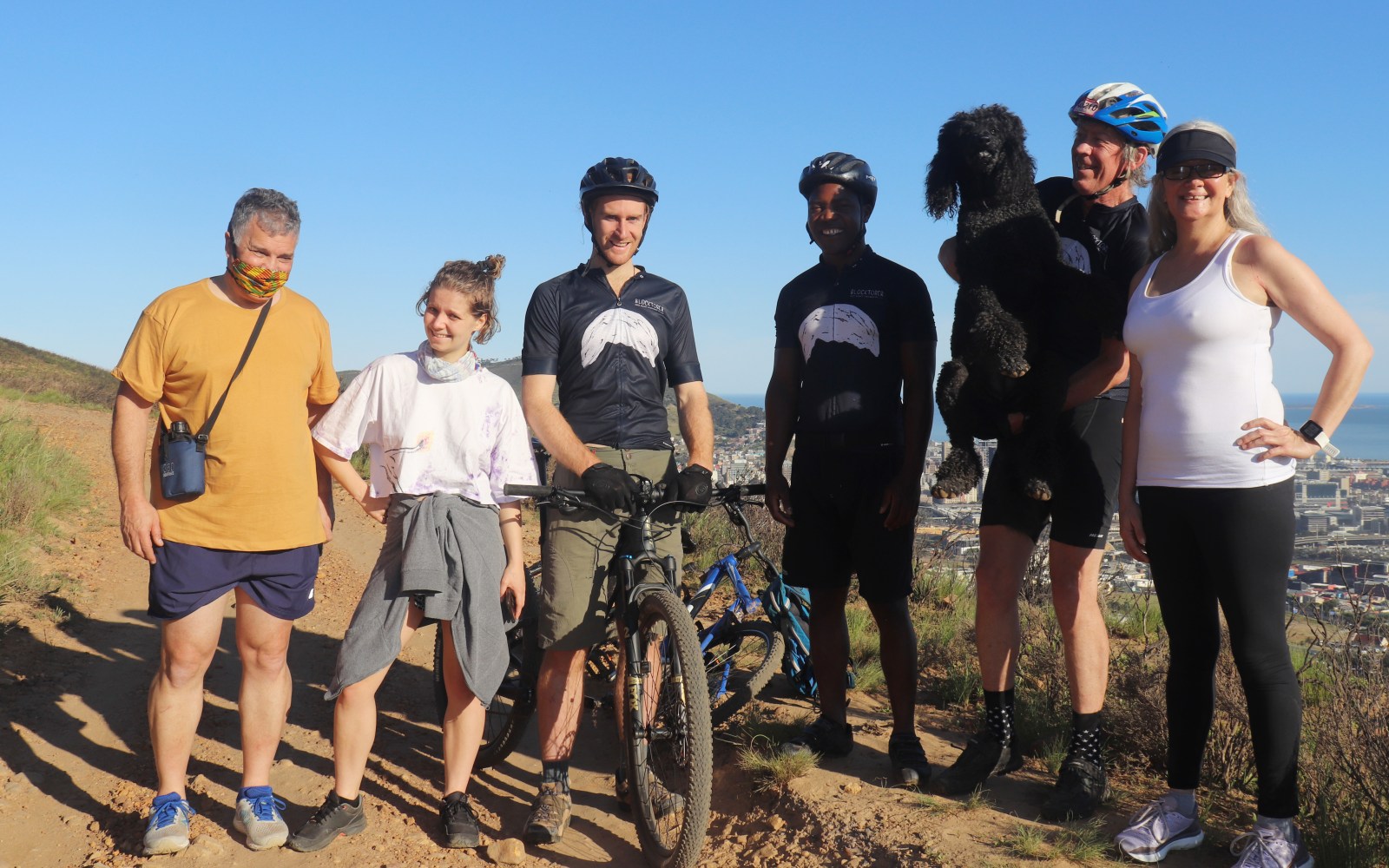 In South Africa, gender-based violence is reported to be five times higher than the global average. So, every day in October, a group of people in Cape Town has been raising awareness as part of the Blocktober walk/run/ride initiative.

On a warm Wednesday morning, I joined the Blocktober walk/run/ride to the King’s Blockhouse along the slopes of Devil’s Peak. The initiative was started to raise awareness of gender-based violence (GBV) in the country, and any funds raised this year will go to the Saartjie Baartman Centre for Women and Children.

As we walked up the slopes of Devil’s Peak, David Schmidt, one of the Blocktober organisers, shared with me how and why he joined the initiative. He had joined to support his friend, Jean du Plessis, who started Blocktober, but also because he wanted to play his part in raising awareness about GBV.

Schmidt then started contemplating what more could be done by men about GBV. “As a father with a daughter, having her ask me ‘What are you doing about this?’ left me feeling disempowered,” Schmidt told me.

“It’s such a big issue; where do you start?” Schmidt asked me. The only response I could think of, in between panting, was that it starts with initiatives like these. It starts with a group, whether small or big, making a concerted effort to bring men to the table when it comes to discussing GBV.

While I tried to keep up with the group I was with, I also reflected on how a physical journey like this often can’t be done alone, especially in a country as unsafe as South Africa.

The first person to cycle to the King’s Blockhouse to raise awareness about GBV was Jean du Plessis, a year ago.

At the time, Du Plessis had made that decision in solidarity with someone he knew who had been sexually assaulted, he told me via email.

In January, he did his 100th ride. “I did these rides to raise awareness and as an act of humble, personal solidarity with someone close to me who had been sexually assaulted,” said Du Plessis.

In South Africa, GBV is reported to be five times higher than the global average. In August 2018, there were nationwide protests against GBV organised by the #TotalShutdown movement. A year later, protests broke out after Uyinene Mrwetyana, a University of Cape Town student, was murdered at a post office in Cape Town.

“My intention is to continue, health permitting, to ride up to the Blockhouse every day, for as long as it takes for this person’s sexual assault case against a former friend to be finalised. The terrible truth is we have no idea when this will be.”

Walking up the mountain with me was Schmidt, his daughter, Sophie Joans, and Bernadine Bachar, the director of the Saartjie Baartman Centre for Women and Children in Manenberg.

The journey, which is sometimes steep, is meant to remind us of the ups and downs survivors have to go through in trying to obtain justice. Some days, the journey is done alone, sometimes with others beside you. Some days are good days and sometimes you need to have the mental fortitude to keep going, despite how difficult the journey is.

But the initiative is also a way to speak to men about GBV.

“Gender-based violence is a massive issue and there isn’t a simple entry point but when we go on this hike, someone asks, ‘Where are you going?’ and you say, ‘Oh, I’m doing this hike in solidarity with gender-based violence survivors’ and that starts the conversation,” said Schmidt.

Along the way, we met a group of regular riders, who were mostly white men. They greeted one another and there seemed to be a sense of community among these men who had bonded over riding or walking to the Blockhouse every day since the beginning of this month.

Commenting on the journey, Daniel du Plessis, Jean’s son, said: “The whole process was to raise one’s own awareness of what it means to be a victim of gender-based violence. When you’re a victim, you don’t have a choice about what’s happened to you and often it stays with you.

“And for those who aren’t victims, it’s difficult to identify with that. If every day, whether it’s sunny or windy or if you’re tired and you’ve made this commitment to ride up on the mountain, there’s some sort of solidarity with those who wake up with that pain of gender-based violence.”

It wasn’t lost on me that an important initiative like this could be inaccessible to young men in areas known to be extremely violent such as Nyanga, Delft and Kraaifontein, areas which were also reported to be among the GBV hotspots.

After almost an hour of walking, we reached the Blockhouse and found some shade to rest under. There, the conversation was about the challenges Bachar has in running the Saartjie Baartman Centre, keeping the women safe and how much funding is available for GBV.

The Saartjie Baartman Centre provides a 24-hour crisis response programme, a residential shelter programme and transitional housing for abused women and their children.

Bachar, who is passionate about women’s rights, asked why there weren’t more men’s initiatives to raise awareness of GBV. Langa For Men and Sonke Gender Justice were doing amazing work, but we obviously needed more, said Bachar.

There was also the #JustForMen play that played at The Baxter a few years ago, which did powerful work in terms of starting the conversation on how men are complicit in making the world unsafe for women, I added.

Bachar and Joans, who had seen the play, agreed. “But there needs to be more,” Bachar emphasised.

“And it seems like a difficult topic for men to discuss among themselves as well,” added Schmidt.

As we walked down, under the blistering sun, Bachar and Schmidt walked ahead of Joans and me, but regularly stopped to make sure we weren’t too far behind. The journey is long and sometimes uncomfortable, but I suppose the most important point is that when you have a community that carries and supports you it makes the process of trying to get justice slightly easier. DM168