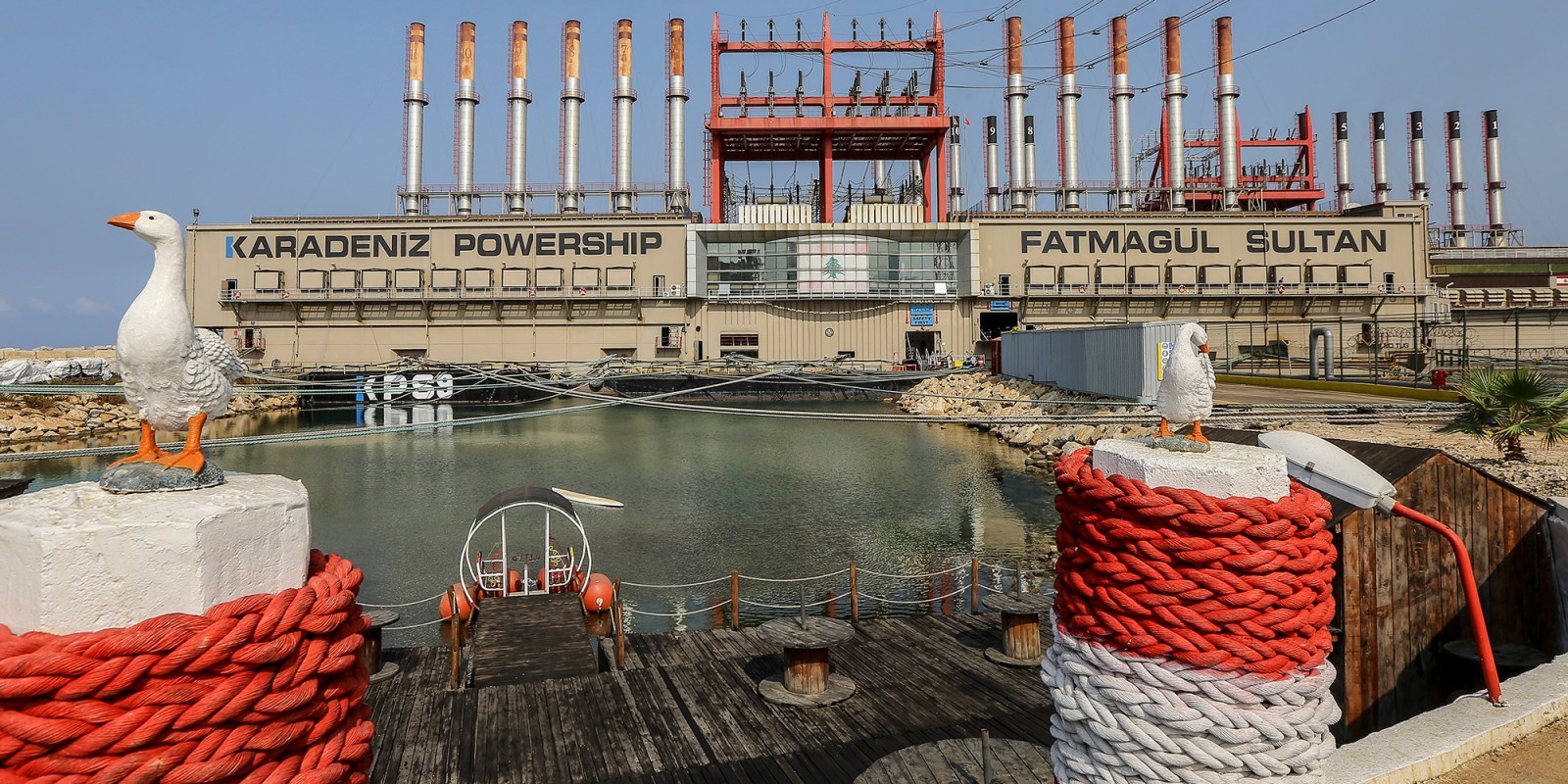 Albeit with chunks of financial calculations deliberately blacked out from public view, the National Electricity Regulator has finally published its official reasons for disregarding strong civil society opposition and pleas for caution in granting a 20-year generation licence to a Turkish powerships company.

More than a month after approving a controversial generation licence to the Istanbul-based Karpowership group, the SA energy regulator, Nersa, has declared itself satisfied that there is “a fair and balanced allocation of risks” between the Turkish power company and the millions of South Africans who will end up paying for the emergency power procurement project for the next two decades — a bill that could reach R218-billion, according to estimates by Council for Scientific and Industrial Research engineer Dr Jarrad Wright.

The Nersa decision document quotes an indicative Karpowership tariff of between R1.30 and R1.48/kWh in 2022, but provides no clarity on the extent to which these initial tariffs could escalate considerably based on fluctuations in the dollar/rand exchange rate, rising prices for fossil fuels or tougher carbon taxes.

Large sections of the Nersa decision document have also been redacted with black ink to conceal financial calculations and other clauses — apparently on the basis that “financial information is confidential”. 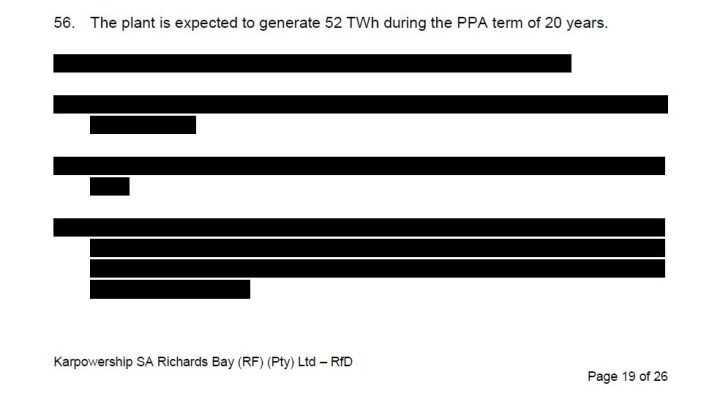 Nersa further brushed aside concerns about the adverse environmental and climate change impacts of the gas-to-electricity plan, Eskom’s apparent reticence in signing off the final Power Purchase Agreement and the recent claims of corruption and political interference in the bidding process made in high court papers.

In written decisions that came to light this week, Nersa also took a swipe at “media reports which may distort the narrative of the [Karpowership] application and misguide the exercise of powers”.

The official custodian and enforcer of the national electricity regulatory framework stated that it would be “irrational for Nersa to consider information from the newspapers and not verified to make a decision” — an apparent reference to reports by the amaBhungane Centre for Investigative Journalism that Karpowership faces criminal charges for allegedly misleading the Department of Forestry, Fisheries and the Environment (DFFE) last year during an attempt to bypass lengthy and costly environmental studies.

A rival bidder for the emergency power contract is also asking the high court to overturn Karpowership’s preferred bidder status, claiming the tender process was “grossly and blatantly flawed, corrupt and procedurally unfair”.

While Nersa appeared to disregard these concerns, it seemed quite content to accept Karpowership’s assurances that the company was “committed to meeting environmental protection and its solution is fully compliant with South African environmental [sic]”.

The regulator has also tabulated its reasons for rejecting objections from at least 13 groups or individuals who opposed or raised concerns over the Turkish power deal, while voicing its agreement with three SA business groups that supported Karpowership.

However, the Centre for Environmental Rights (CER) has disputed Nersa’s argument that its generation licence could be revoked at a later stage if Karpowership failed to secure environmental approval from the DFFE.

The Cape Town-based legal clinic said the law was very clear about the requirements that had to be met before Nersa could issue a generation licence (including compliance with environmental laws).

“Therefore, to issue a Nersa licence without Karpowership having the ability to meet environmental legislation, is premature, if not unlawful.  It’s no answer to state there is no prejudice since licences can be revoked. The ability to revoke the licence has no bearing on whether or not a licence should have been issued in the first place.”

“This information is necessary, and it is in the public interest to be made available, since the public has the right to know the extent to which electricity generation plans will impact them in the long term in terms of rising electricity costs, any lock-in risks, and any financial risks. The same comments apply in respect of the heavily redacted reasons provided by Nersa.”

The CER said it could not comment on the reasons why it took Nersa more than a month to publish its reasons for granting the Karpowership licence.

Nersa has suggested that the DFFE was likely to reach a final decision on Friday on whether to accept or reject Karpowerships’s Environmental Impact Assessment (EIA).

Should Minister Barbara Creecy reject Karpowership’s appeal, it now seems unlikely that the company could meet the latest 27 January deadline for financial closure by trying to rerun the EIA process over the Christmas holiday period.

Outa energy adviser Chris Yelland said on Wednesday that for financial reasons alone, the Turkish power plan made no sense for Eskom and electricity users.

“If they [Karpowership] were delivering into the grid today the price would be very close to R5/kWh based on the current price of liquid natural gas (LNG).”

Yelland said there was a very significant difference in the cost price variation applicable to the three Karpowership projects as compared with any of the other projects in the government’s risk mitigation/emergency procurement project.

“For all the non-Karpowership projects, imported fuel costs (LNG, diesel, etc) form a very low percentage of the tariff rate. The tariff rate is therefore largely indexed only to the South African consumer price index (CPI) over the 20-year contract and is therefore essentially fixed in real terms over this period.

“The Karpowership projects, on the other hand, use fully imported LNG fuel, which makes up an estimated 60% of the tariff rate. Similarly, the powerships themselves are leased from the Turkish Karpowership holding company, with the associated lease costs thus being another fully imported cost component, making up an estimated further 25% of the tariff rate.

And yet, there was still little or no transparency on the details. particularly those portions disclosing the details and make-up of the business case, tariff rates and price adjustment formulae which had been redacted and were not available to the public or affected stakeholders.

Though neither CER, Outa or other parties have announced any formal plan to challenge the Nersa decision in court, Yelland suggested on Wednesday that there may be no need to pursue litigation if Karpowership’s potential funders decide to pull the plug due to the continued delays and uncertainties associated with the project.

Nevertheless, Outa has previously stated that should Nersa fail to apply its mind properly to the Karpowership licence application, South Africans would probably be burdened with expensive and time-consuming litigation.

Nersa’s full reasons can be viewed by searching for electricity decisions at: Regulator Decisions – NERSA. DM/OBP