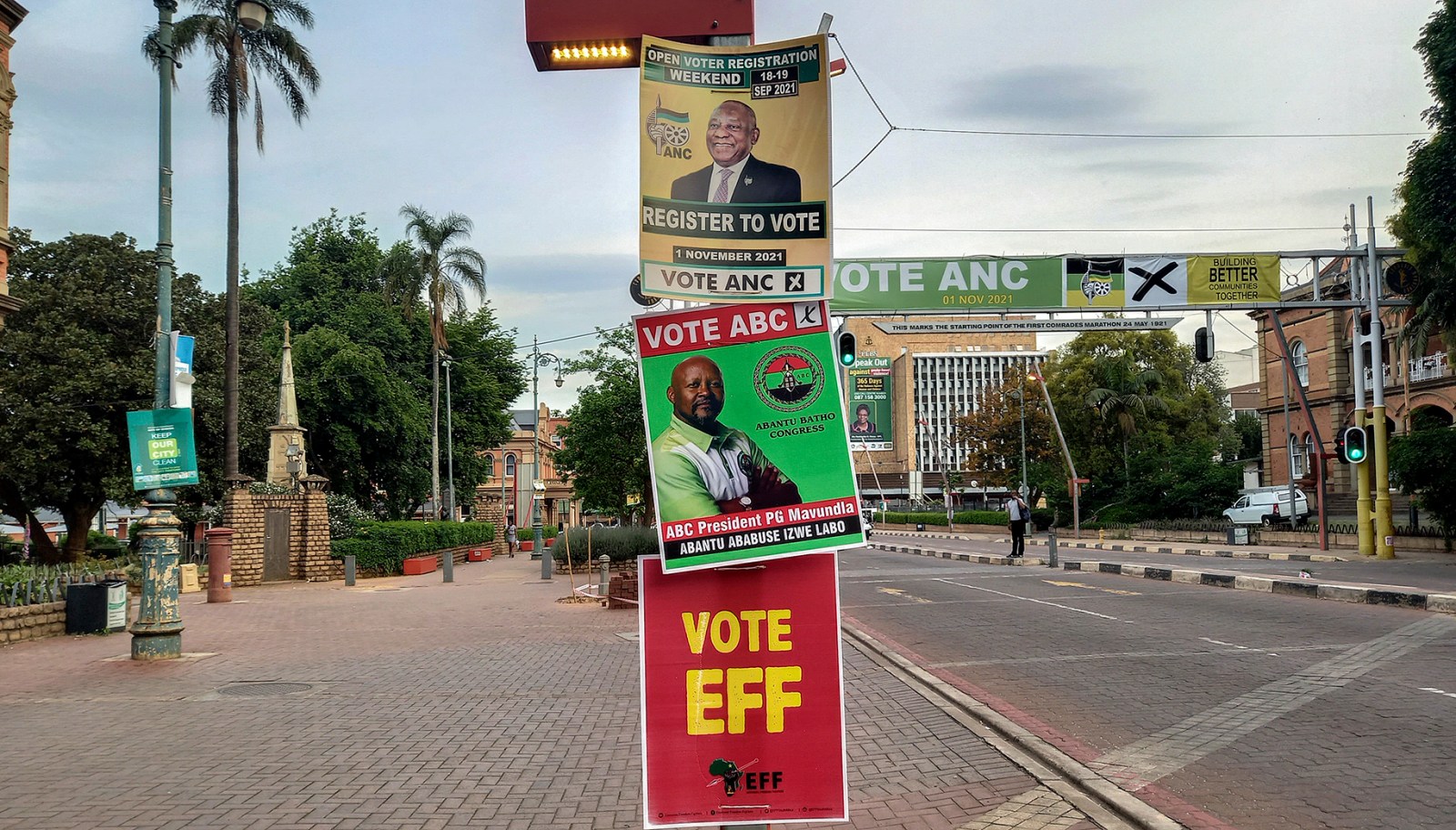 Soon, South Africans will have made their mark on the ballot sheets, the results will have been counted and political posters will droop from streetlamps for months to come. Rebecca Davis takes a look back at the absurd highlights of the 2021 local government elections campaigns.

South African politicians in general are not known for genteel engagement with one another. This election season, like every other one, we have witnessed political acrimony tipping over into actual violence – particularly in KwaZulu-Natal. But when it comes to verbal rather than physical daggers, queen of the pack this year has to be Good leader Patricia de Lille. Responding to her DA rival Geordin Hill-Lewis – who had made the highly politically expedient suggestion that De Lille’s ministry release the Acacia Park parliamentary village for affordable housing – De Lille exclaimed: “He is stupid! He is absolutely stupid!” No doubt many politicians feel this way about their competition, but few voice it quite so bluntly.

It’s routine for allegations of vote-buying to fly back and forth before South African elections, but less common for this practice to happen in full view of journalists. Before the 2019 polls, suspended ANC secretary-general Ace Magashule came under fire for handing a woman in Philippi two crisp R200 notes after seeing that her fridge was empty. This year the ANC stepped it up a notch. After President Cyril Ramaphosa paid a surprise visit to Phuthaditjhaba in the Free State, 75-year-old Lisebo Molefe was gifted a R10,000 Checkers shopping voucher. In unrelated news, Molefe said afterwards that she would be voting ANC.

ANC leader Cyril Ramaphosa has many outstanding qualities, but razor-sharp humour is not among them. On the campaign trail this year, he has been reusing “funny” anecdotes he first showcased before the 2019 elections. Daily Maverick contributor Carien du Plessis describes them accurately as “Dad jokes”. They are too long to transcribe here, but one Ramaphosa favourite involves an Eastern Cape woman who is so proud of her government-sponsored house that she insists Ramaphosa enter her bedroom – prompting great awkwardness for the Prez. Did this actually happen? Perhaps. CR seems set to tell this story, and others of similar hilarity, until the ANC falls below 50%.

The DA just cannot catch a damn break. No sooner had the fallout from one incredibly unwise poster campaign died down, another would crop up – leaving the blue party to play a perpetual game of Poster Whackamole. First there was the hoo-ha over Phoenix posters calling vigilante residents “heroes”. Then there were complaints from within the party that posters stating “DA or ANC: Your choice” effectively amounted to free advertising for the ruling party. And finally, pictures started to do the rounds on social media showing axed DA leader Mmusi Maimane appearing on posters around Cape Town. It emerged that, to save costs, the Cape Muslim Congress had bought 10,000 old DA posters and slapped their stickers on top of them – but when posters flaked off in the rain, back came Mmusi to haunt the DA. There’s probably a metaphor there.

The Economic Freedom Fighters is best known for promising voters the world, but this year it has been pipped to the post by Gayton McKenzie’s Patriotic Alliance. The PA, whose slogan is Ons baiza nie (We’re not messing around), proved the opposite when it announced in October that if elected to power, the party intended to legalise “spinning”: to quote Wikipedia, “a South African motorsport that involves driving cars at speed in circles and performing stunts in and out of the car”. This proposal is all the weirder given that PA cofounder Kenny Kunene was involved in a spinning accident in December 2020 after he fell out of a moving vehicle while hanging too far out of the window. You cannot make this stuff up.

We all make mistakes, which is why pencils come with erasers. But during an election season, few mistakes prove as consequential as that made by Herman Mashaba’s ActionSA – when the party failed to register an abbreviation of its name with the Electoral Commission of South Africa. As a result, ActionSA’s name will not appear on any ballot sheets; only its logo will be printed. To make matters worse, the party’s logo is a highly unmemorable white and green confection that Mashaba himself would probably struggle to draw from memory. On the plus side, at least ActionSA has a ready-made excuse for underperformance in its first polls.

All of a sudden, in the last days of campaigning, posters have gone up around Cape Town featuring thumbs-up icons together with the words “CapeXit” and “Vote FF Plus”. Whatever could it mean? The Freedom Front Plus subsequently clarified things – sort of – by releasing a statement announcing that the party had “formally joined hands” with the movement striving for the secession of the Western Cape. That made things clear as mud, since CapeXit is the main project of a totally separate political entity called the Cape Independence Party, which will also be on the ballot come 1 November. Regardless, the major issue remains: How are you supposed to pronounce “CapeXit”? It just doesn’t work like “Brexit”. In any way.

Imagine if a party’s head of campaigns tweeted an instruction to vote for a rival party? That was the humiliating experience of the ANC’s Fikile Mbalula, who accidentally used the hashtag #VoteEFF when publishing a video of Ramaphosa on the campaign trail. Mbalula scrambled to delete it when he realised the error, but that was not before it had been leapt upon and shared by the eagle-eyed pranksters of the EFF. In a way, this was karmic payback: a few weeks earlier, Mbalula had posted a video of an EFF supporter at a campaign rally mistakenly shouting “Viva ANC!” before correcting herself. Social media is the ultimate leveller when it comes to political pratfalls.

In early October, African Transformation Movement (ATM) strategist Mzwanele Manyi tweeted with palpable excitement that “the one and only” Kuli Roberts would be standing for the ATM as a candidate in Tshwane’s Ward 65. Roberts is a media personality with an interesting past, having penned a Sunday World column in 2011 describing coloured women as having “no front teeth”, and loving “to fight in public”. On this occasion, Roberts seems to have forgotten that working journalists – she still serves as Sunday World’s lifestyle editor – aren’t really supposed to stand for political office. The tabloid promptly suspended Roberts, and then the ATM dumped her as well. Oh, what could have been!

Most niche appeal to voters

Let’s preface this by saying that environmental issues in general do not get nearly enough airtime from South African political parties, and those politicians for whom climate crisis is a special preoccupation – take a bow, United Democratic Movement leader Bantu Holomisa – deserve praise. This being so, hats off to the Good party on 19 October for taking the time to release a statement complaining that the type of weedkiller being used by the DA-governed City of Cape Town was giving some dogs liver damage. Since Good’s Patricia de Lille and Brett Herron also staged a campaign event where they walked their dogs along the Sea Point Promenade, one suspects the complaint may have been quite personal.

To great fanfare at the beginning of October, and to an audience of what they claimed were “scores of jubilant community members”, municipal officials in ANC-run Komani – formerly Queenstown – cut the ribbon on a R15-million “sports stadium”. Which turned out to be a patchy field with seating for about 20 people. Amid expressions of disbelief, outrage and mirth from the public, local ANC ward councillor Unathi Mlindazwe announced happily that “the facility will keep our children far from drugs”. The problem is that just about the only thing the “stadium” might be good for is providing a convenient gathering place at which to take drugs.

It might seem strange to award this accolade to King Buyelekhaya Dalindyebo of the abaThembu, the permanently stoned monarch who was jailed for a string of offences against his subjects in the 1990s, including kidnapping and assault. Despite having received a special remission of sentence from Ramaphosa, which saw him leave jail (very) early, Dalindyebo has chosen to repay the favour by very publicly throwing his lot in with the EFF – in exchange for a cow and the promise of a R1.5-million Mercedes SUV from EFF leader Julius Malema. You may recall that Dalindyebo – who has referred to the ANC as a “devil’s fart” – previously threw his lot in very publicly with the DA, but all they gave him was a T-shirt, so he’s on a much better wicket now. DM168