What the travels of three seals to South Africa can tea...

Lessons aquatic: What the travels of three seals to South Africa can teach marine researchers 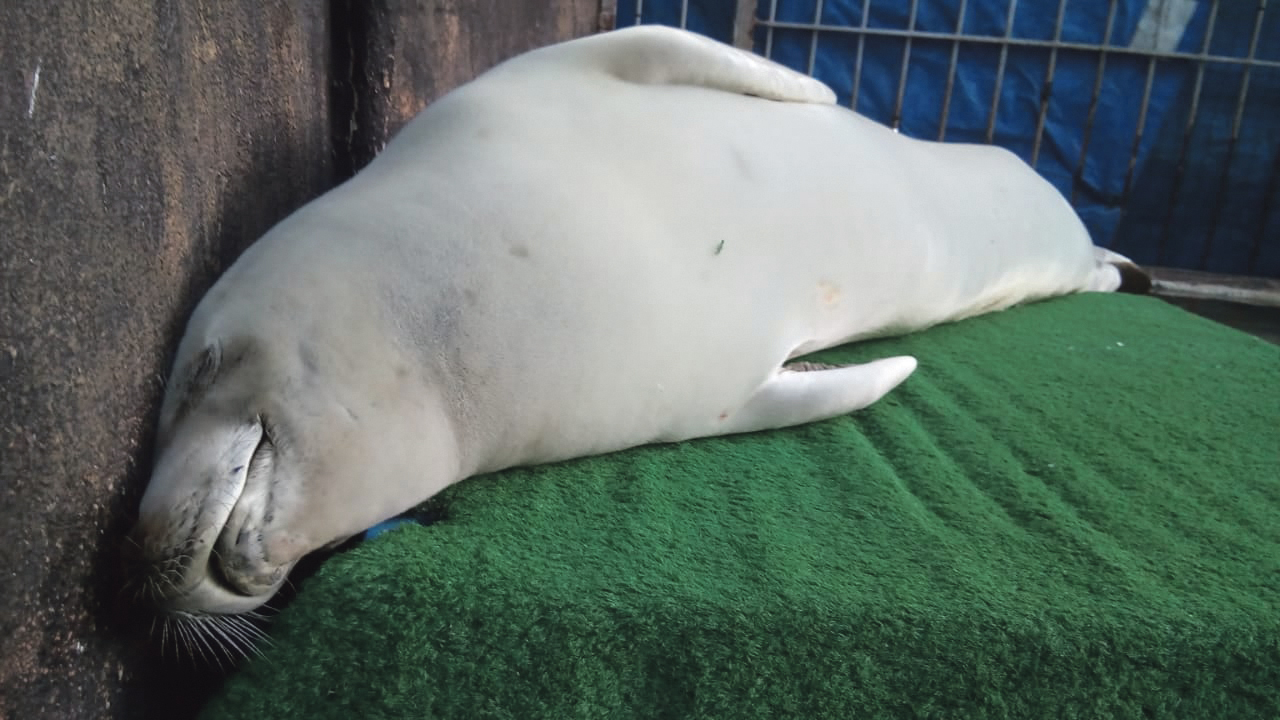 In rare occurrences, three crabeater seals, probably from Antarctica, washed up along SA’s coastline this year. While two may have become shark prey, their visits have been invaluable to marine researchers.

Pearl was extremely skinny when she was discovered along the Wilderness shoreline near the town of Mossel Bay.

She was young, alone, and very far from home.

It was decided that the tourist, likely all the way from Antarctica, would need to gain some weight and be given a tracking device before continuing on her travels.

Pearl became the third crabeater seal (despite what the name suggests, these seals eat krill) to wash up along South Africa’s coast this year.

She was discovered ashore on 7 May.

Pearl’s story does not end well.

After about three months of rehabilitation and being released into the sea, she was again discovered along the coast in early September. She died because of sand ingestion, with the weight of the sand ingested while trying to eat other little things twisting her gut, resulting in fatal colic.

Despite the sad end to the tale, what was gleaned during Pearl’s stay in South Africa, including recordings of the sounds she made, will help research into the species.

Those pearls of wisdom may therefore be beneficial to other crabeaters.

DM168 previously reported that, on 28 January this year, two crabeater seals – probably from Antarctica – also inexplicably ended up at different spots along South Africa’s coast on the same day – one in East London and the second along the KwaZulu-Natal coastline.

The East London crabeater seal was transported to Bayworld in Gqeberha for rehabilitation. The one that washed ashore along the KwaZulu-Natal coast was taken to uShaka Sea World in Durban.

In February 2021, the seals, named Sebastian and Ragnar, became the first to be fitted with satellite trackers and released into the sea from South Africa.

Together, they were released into the Agulhas Current, which was meant to help them in the first stretch of their journey, possibly back towards Antarctica.

Ragnar was tracked for only four days before his satellite signal was lost south of Mossel Bay, while Sebastian swam towards Cape St Francis to the west and was followed for 12 days.

It is unclear what happened to them after that. But, like Pearl, their time in South Africa could contribute to the future care and understanding of the species if more crabeaters wash up along the coast.

Previously, when Sebastian and Ragnar washed ashore, Fannie Shabangu, a marine biologist in the Department of Forestry, Fisheries and the Environment, said the country’s coast was “the extreme end of their distribution range”.

“The strong offshore returning Agulhas Current might have carried them from the Antarctic Circumpolar Current and landed them to Durban and Port Elizabeth where the Agulhas Current starts to ‘hug’ the coast of South Africa,” he said.

Shabangu was more recently involved in analysing the recorded sounds that Pearl made while she was being rehabilitated.

He said it was still unclear why the crabeater seals ended up in South Africa.

Thirty-four had been recorded along the country’s coastline in about 65 years, and oceanographic factors could have played a role in them ending up in South Africa.

“But we really don’t know,” Hofmeyr said. “That’s why it’s important to record every sighting.”

Pearl was discovered on the shore and taken to Bayworld for rehabilitation.

“She was a bigger animal, probably in the same age group [as Sebastian and Ragnar, who were less than a year old].”

When Sebastian and Ragnar were discovered along the coast in January, the plan was to rehabilitate them and get them back to sea as soon as possible.

Part of the reasoning behind this was because the pen Sebastian was kept in had rubbed his underside raw.

The two seals had been slightly underweight when released in February. Given this, when Pearl was being rehabilitated, it was decided to focus on increasing her weight so that, when she was released, she would be heftier.

Hofmeyr explained that Astroturf was placed in her pen to try to prevent her underside from rubbing raw – this helped only to a certain extent. Pearl, a voracious feeder, gained weight over two months, and plans were then made to get her back out to sea.

In a post to Bayworld’s Facebook page, Hofmeyr described what happened: “So on the evening of 22 August, a group of us gathered to prepare Pearl for her journey.

“With us, we had a satellite tag provided by Prof Marthán Bester of the University of Pretoria. This would allow us to track Pearl’s movements over the next few months as she hopefully returned [to] Antarctica.”

Pearl was sedated, and samples were taken from her. She was also weighed and, according to Hofmeyr’s post, “registered a mighty 120kg. A legacy of all that lovely fish.”

Pearl was released on 23 August.

“A big plop, and she was in the ocean,” Hofmeyr said in his post. “A few seconds later, we briefly saw a golden shape beneath the blue as she swam south.”

It was hoped Pearl would continue swimming south, but she instead swam north.

On 26 August, she came ashore west of Jeffreys Bay and later headed back out to sea, then towards the east of the town.

Her tag showed that she was on a beach in the area, where she was subsequently found dead, having ingested too much sand.

Referring to Ragnar and Sebastian, Hofmeyr said that their satellite tags had stopped signalling after a few days, but it was uncertain what had happened to them.

The tags could have detached from the seals or stopped transmitting, although this was unlikely to have happened.

“If they had gone south, it would have been safer for them… The crabeater seals headed north … and ended up back on, or near, the South African coast.”

Hofmeyr suspected Ragnar may have encountered a shark.

“It’s possible he encountered a killer whale. There’s a possibility of drifting debris, or he was caught up in a fishing net or pollution,” he said.

After his release and while still being tracked, Sebastian came ashore a few times in the evenings. Hofmeyr said he too could have encountered a shark or killer whale or possibly came ashore and ended up eating sand that resulted in fatal colic – precisely  what had happened to Pearl.

“Arriving on the South African coast is really not good for a crabeater seal,” he said.

If a crabeater was spotted ashore and left on a beach, it would likely end up dying.

If rehabilitated, getting them directly to Antarctica was not a wise option – crabeaters could pick up and carry diseases caught while travelling via South Africa.

“The long swim south is sort of a quarantine,” Hofmeyr explained.

Going forward, if more crabeater seals washed up, they could be caught, rehabilitated and released like the others were, after consultation with oceanographers, he said.

For example, it could be found that it was better to release a seal if the current was floating more strongly south.

Another option could be to maintain a seal in captivity for environmental education if this was more suitable.

Hofmeyr said that the more stressed an animal was when captured, the more unlikely it was to survive.

Sebastian, for example, was calm when surrounded on a beach and moved into a crate. But when Pearl woke up to a similar situation, she was frightened and more stressed.

Little is known about why they ended up in South Africa. But research into the crabeater seal trio will contribute to decision-making about how future visitors of their species are cared for in the country.

Sightings of stranded whales, seals or dolphins along the South African coast, especially in the southern and eastern Cape, should be reported to Bayworld’s stranding hotline on 071 724 2122. DM168

Lessons aquatic: What the travels of three seals to South Africa can teach marine researchers