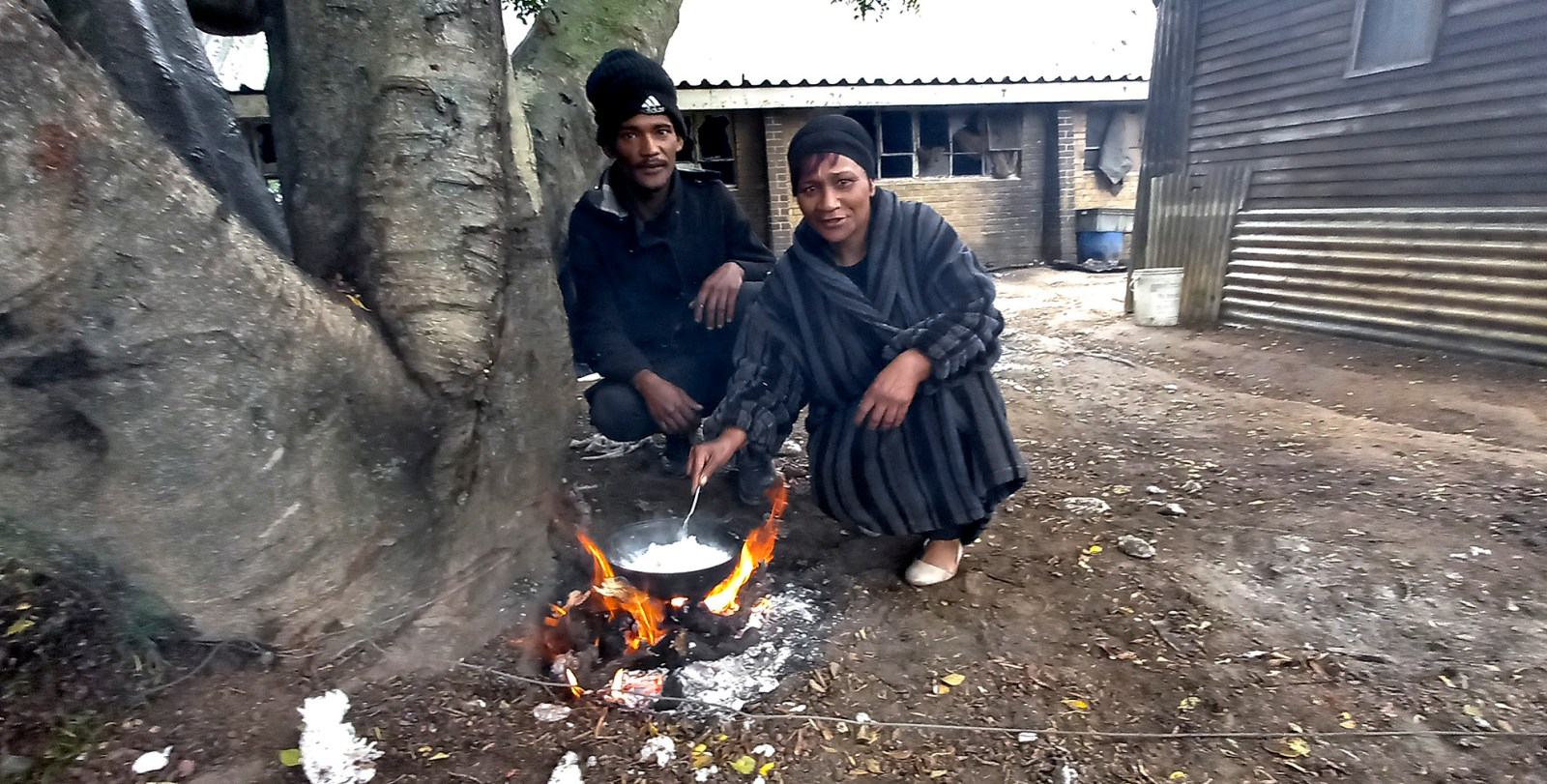 01/11/2021 Shireen Arendse (46) and her 29-year-old son, Serano, prepare breakfast in the pouring rain under a tree in Elsenburg, Stellenbosch, before heading out to vote on Monday morning. (Photo: Vincent Cruywagen)

Scores of farmworkers in the Stellenbosch area struggled in pouring rain to light a fire to make a cup of coffee or some mieliepap before heading out to vote.

Not even the heavy downpour could dampen the spirits of farmworkers who streamed in great numbers to the voting stations in Ward 19 in the Stellenbosch Municipality.

On Monday, 1 November, at 10am in Elsenburg adjacent to JJ Rhode Primary School where residents cast their vote, Daily Maverick caught up with Shireen Arendse and her son, Serano, stirring a pot of mielie meal under a tree in the pouring rain.

“Before I go and vote I need to have a quick meal and a coffee. We’ve been living like this the past six years and I hope that my vote will secure me a permanent job on a farm and a decent home,” she said.

Arendse is a casual worker and works on different farms where her service is needed. Six years ago she and her son lived in a toilet in Elsenburg and three years later managed to build a wendy house.

She believes every farmworker who cast his or her vote on Monday did it to improve their living conditions.

At 9.30am, another farmworker, Abraham Plaatjies, said he wanted his vote to bring an end to the eviction of farmworkers in the Western Cape.

“At Elsenburg we don’t even have a building for our church services or meetings. I’m praying that the ward councillor who wins our ward will look at our needs. That is why I voted for change,” he said.

Not everyone was as brave as Plaatjies and Arendse. One woman said: “Please sir, don’t use my name because I don’t want to have any trouble with the farm owner where I work.” She has been working on a farm in Stellenbosch for the past eight years.

“My voting wish is that the government look at increasing our salary. We get a monthly salary of R4,500 and after deduction ends up with R3,000. After I paid my own expenses I’m left with R1,000 for groceries, school fees and odds and ends.

“An early Christmas present in the form of a salary increase would be welcomed by farmworkers, so that we can breathe a little,” she said.

In 2016, Ward 19 was won by the DA with 1,666 votes or 78% of the vote. When Daily Maverick visited the ward there were several DA, Good, Independent Civic Organisation of South Africa (Icosa) and African Christian Democratic Party posters at the voting stations

See a footprint of the Ward via Wazimap here.

At St Vincent Primary School, the second voting station in Ward 19, a large number of workers from farms in the area arrived.

When farmworker Sandra Arendse (38) walked out of the voting station it was storming and she still had to walk about 15 minutes to get home.

Better housing and especially sport facilities where young people can explore their talent are among the changes Arendse said her vote could bring about.

Farmworkers were also top of mind for Valerie Fredericks, who has lived in the Stellenbosch area for almost 30 years. “You only vote because you’re a citizen,” she told Daily Maverick. After the elections, she wanted those in charge of her ward and municipality to focus on farmworker evictions. For example, she said, when farmworkers die their children are left with eviction notices. “You have sleepless nights because of it.”

Asked why she arrived so early, Fredericks pointed to the rain: “It’s better to come earlier than later.”