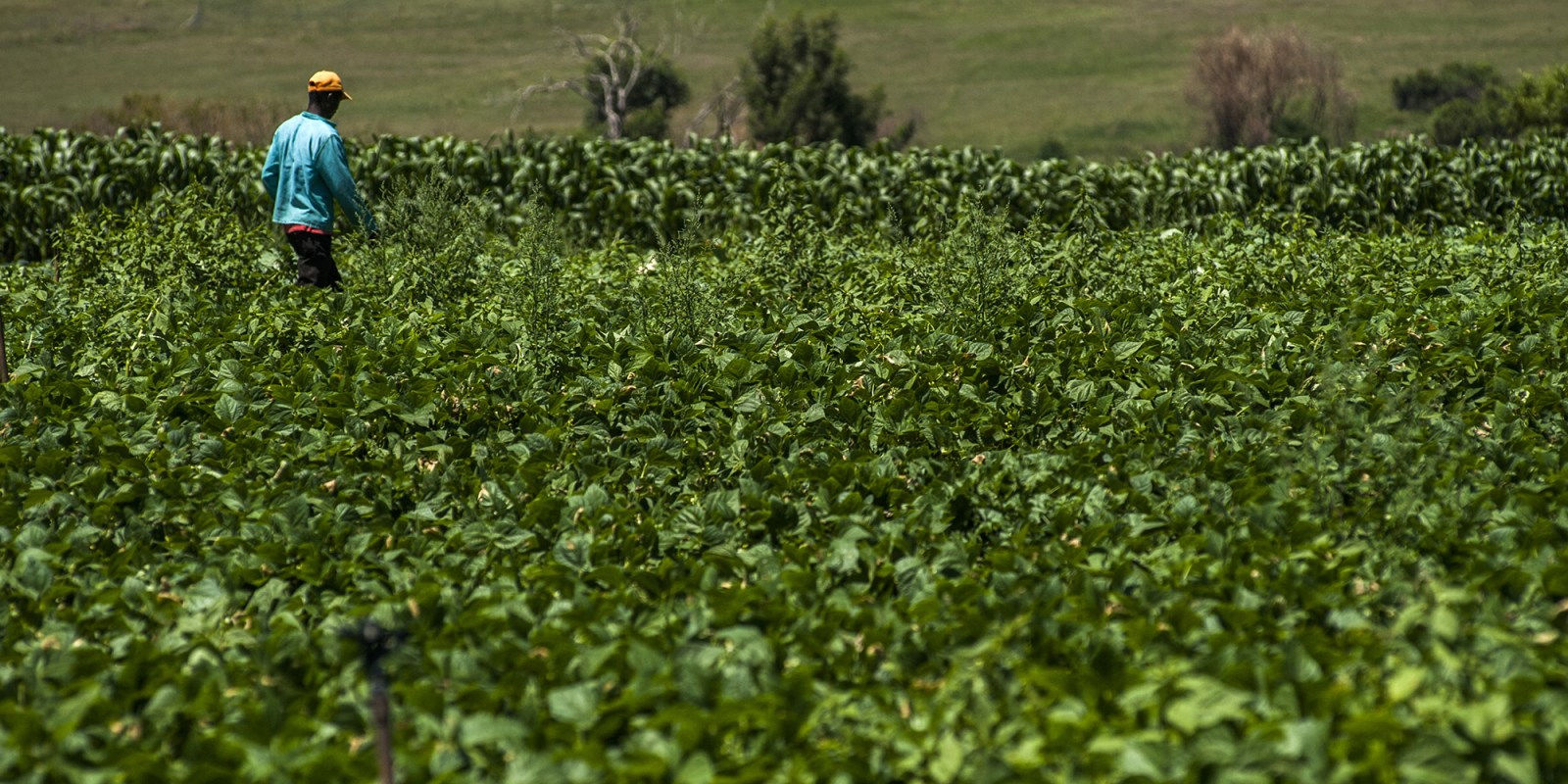 A farmer walks across a field of beans grown from Syngenta AG bean seeds on a farm near Johannesburg, South Africa, on Thursday, 4 February 2016. (Photo: Waldo Swiegers / Bloomberg via Getty Images)

The European Union is seeking to compel other countries, including South Africa, to adhere to new regulations if they want to continue to access its lucrative market. This raises questions about the capacity and potential for South Africa to adapt, as well as the risks and opportunities that the regulations present for future access to the European market.

The European Union (EU) is seeking to implement urgent policy measures to combat the effects of climate change. In its 2030 climate target plan, the EU aims to reduce greenhouse gas emissions by 55% from 1990 levels.

To that end, the EU has crafted the “Farm to Fork strategy”. Launched in 2020, it is a new approach which ensures that agriculture, fisheries and the entire food system effectively contributes to achieving the target. The strategy is at the core of a broader initiative, the European Green Deal. Its aim is to reduce the environmental and carbon footprint in the way food is produced and consumed.

The strategy lists 27 actions covering food production, processing, retailing and waste. They aren’t expected to be implemented until 2022, to give regulators and food-system actors time to transition into the new policy regime.

It has four broad pillars:

The EU is seeking to compel other countries, including South Africa, to adhere to new regulations if they want to continue to access its lucrative market. This raises questions about the capacity and potential for South Africa to adapt, as well as the risks and opportunities that the regulations present to future access to the EU market.

South African producers – as well as those in Mozambique and the rest of the Southern African Customs Union – may face several challenges. These include:

But there are opportunities too.

One area in which there may be room for South Africa to grow market share is in genetically modified (GM) foods. South Africa produces some GM crops. But the EU currently has very tight restrictions on GM imports. However, it is currently reviewing its GM regulations. It has released a study confirming that products developed from new genomic techniques have the potential to contribute to sustainable agri-food systems in line with the objectives of the European Green Deal and Farm to Fork Strategy.

A change in its policy could open up new export avenues for South Africa.

Another area of growth is in high value organically produced food. South Africa has existing commercially driven export value chains that already conform to emerging rules in this sector. However, these foods are still targeted at niche markets in the EU. But the Farm to Fork Strategy seeks to make them mainstream. This can be an opportunity for South Africa if farmers begin to produce higher volumes at relatively competitive prices.

Another opportunity arises from projections that global food demand will increase by as much as 60% by 2050. Few EU member states can allocate enough land to produce and match supply to meet this demand. The assumption, therefore, is that the EU will increasingly depend on food imports.

South Africa has at least 1.3 million hectares of additional cropland that can be sustainably brought into production.

Against this backdrop, South Africa can continue to expand its production to meet an increasingly significant portion of the EU’s food needs. This is especially so if local food systems adapt and align to standards to meet any new regulatory standards.

But the country’s agricultural sector will also have to up its game when it comes to technological innovation. Technical change will have to involve the adoption of technologies that will reduce the carbon footprint of the agrofood system as well as increase yields in a sustainable way.

Part of that process will be to expand the adoption of high-yielding, drought- and pest-tolerant genetically engineered crops. These will enable farmers to use less land to produce more food. This will also allow for more land to be set aside for preservation and increase the potential for carbon sequestration.

Increased inequality: There need to be deliberate and strategic interventions that support regulatory compliance. Without these, there is a real chance that resource-poor farmers will be left out of the new “sustainable agrofood system” due to their lack of financial and technical capacity to conform to new standards.

This will only serve to deepen the inequality gap and widen the divergence between the informal and formal food systems. The first mover advantage for EU value-chain actors may potentially displace sub-Saharan African exporters in markets if adoption of regulations takes more time than initially envisaged.

Offshoring of ‘bad production’ to South Africa: Food producers who cannot comply with the provisions of the Farm to Fork Strategy could potentially relocate parts of their value chain to South Africa, targeting exports to the Middle East, the Far East and Asia where food standards are far less stringent. Without any pressure to comply with environmental sustainability, the types of technologies that will be implemented in South Africa may hurt the continent in the long run.

The four key factors that will drive the re-set of the food system through the Farm to Fork Strategy will be:

The EU and the private sector may need to provide significant technical and financial support to facilitate South Africa’s transition and align its regulatory environment with the focus on health and sustainability.

In the long run, the expectation is that with the harmonisation of standards and practices will also come structural change of the food system in such a way that value chain profits are not disproportionately accumulated at the expense of farmers. This will require higher levels of transparency across all parts and aspects of the South African food system. DM/OBP

This is an edited version of the article, The EU Green Deal: how will it impact South African agricultural exports?, originally published by Econ 3×3.