Disinformation in a time of Covid-19: Local government elections 2021 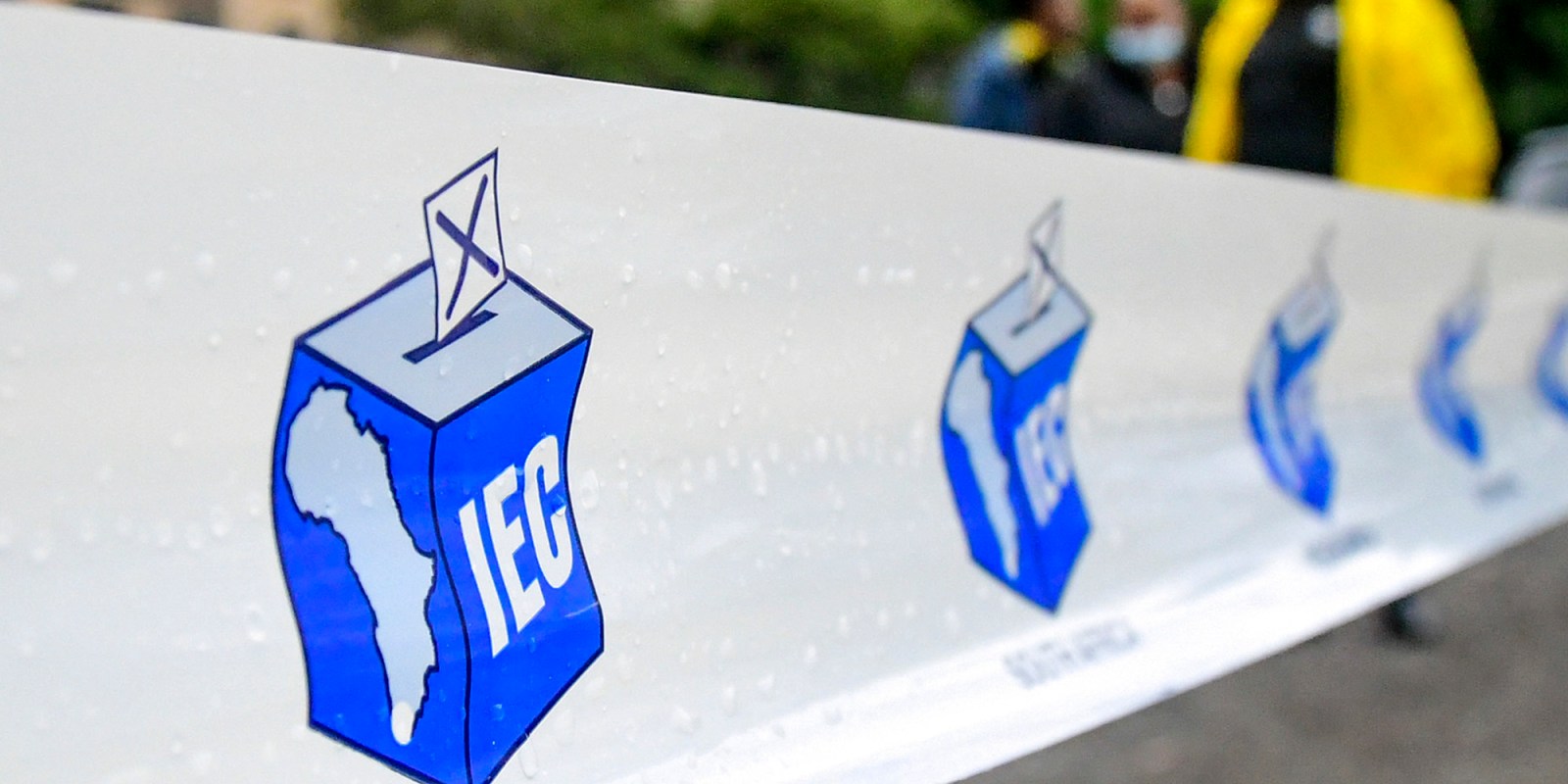 Only nine of the 433 registered voters voted at the Phungulelweni voting station in the 2021 local elections. (Photo by Gallo Images/Darren Stewart)

Last week we focused on the significance and importance of the partnership with the social media platforms. This week, as we vote in the local government elections, we look at the trends over the past two weeks. Real411 has been receiving complaints since March 2020. As we near 2,000 complaints, we look at what kinds of issues have been reported in this shortened election period, and pull out some examples. Week 36: Weekly trends for Real411 for October

As expected the number of complaints have continued to climb since the start of October. Real411 averaged about 2.6 complaints a day in the first two weeks of October and 3.7 complaints each day for the past two weeks.

These interests may vary from commercial benefits of “alternative” products or it might be linked to some of the international anti-vaxxer networks. It is also likely that the continued emphasis on Covid-19 speaks to how it has been used by some political parties as an element of their campaigns. The ACDP, “The Party of Action”, and the “Us the People” have all made Covid-19 vaccines a central element of their campaigns.

Many of the complaints about elections have focused on the IEC, often relating to difficulties registering, or most recently with bits of false information like this one:

It’s a subtle piece to the extent that the IEC did actually put out a post on social media that said the following:

By shifting the emphasis in the false version to suggest that you wouldn’t be able to vote WITHOUT a pen it went from a request to help prevent the spread of Covid-19 to a potential denial of people’s right to vote if they didn’t own or forgot to bring a pen. It’s a small shift, but it demonstrates how easily something can become disinformation.

As the counting process begins we can expect to see efforts to discredit the elections process. To be clear, where there are efforts to undermine the integrity of the elections, they must be reported on by the media. The IEC, to its credit, already issued a statement on Sunday, 31 October noting some isolated incidents and the actions it had taken. Indicating that the elections are not perfect and that there are bad actors can help build credibility. Credibility of the IEC can be gained when action is taken (e.g. the affected boxes are quarantined), the details are provided and where a stated plan to work with the party liaison committee to determine a way forward is outlined.

A look at the trends for October reveals, as can be seen in the graph below, that Twitter (35%), followed by Facebook (27%) and WhatsApp (19%) accounted for 81% of all complaints submitted to Real411. As some of the most popular formats, these trends are not unusual. We have found that in some periods, Facebook and WhatsApp might have more complaints than Twitter. We cannot be certain what drives some platforms to receive more complaints than others in a period. It may be that in some months a particular issue or person is trending on a platform and that the complaints about that tend to be from the same platform. 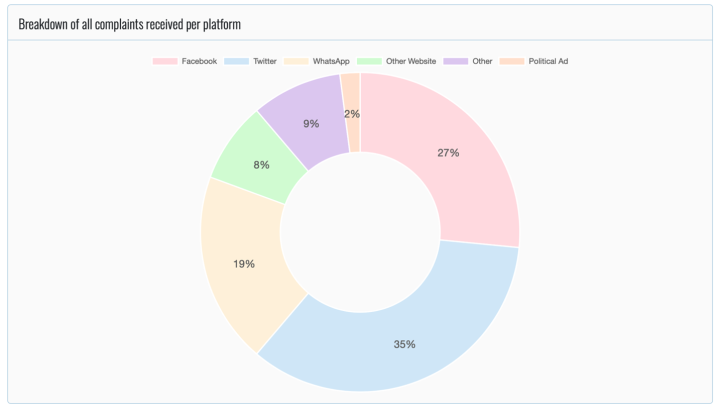 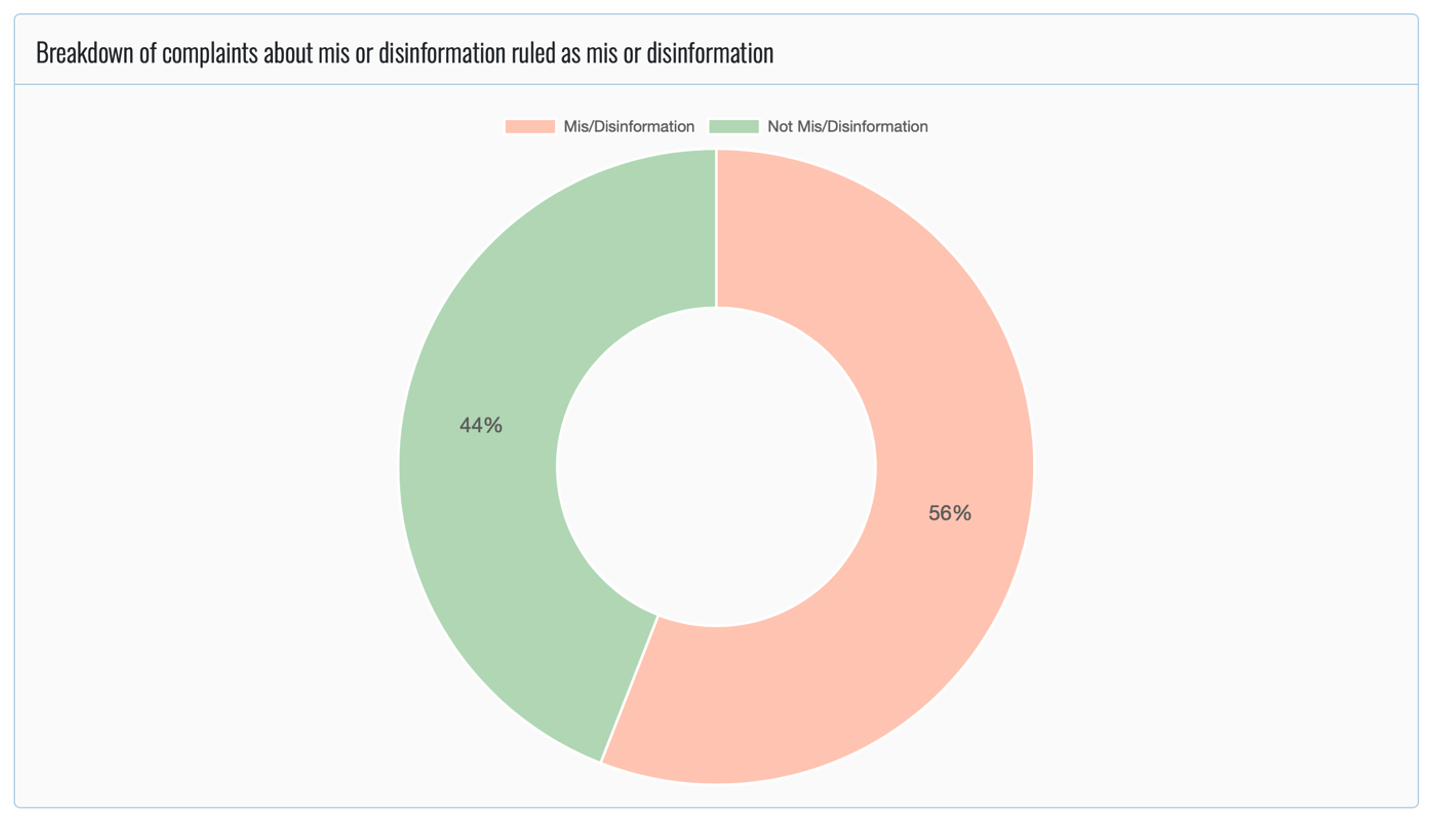 Whatever the cause of the higher levels of disinformation it is clear people need to exercise extreme caution on social media over the next few days as people will attempt to deceive and undermine the elections process.

If we look at the full period from March 2020 to the end of September 2021, we see that 35% of complaints on Twitter are found to be disinformation compared with 32% on WhatsApp and 20% on Facebook.

In the current period the increase in the number of complaints found to be disinformation on Facebook compared with Twitter and WhatsApp requires further analysis but may be due to complainants identifying a number of Facebook pages and groups actively disseminating disinformation. 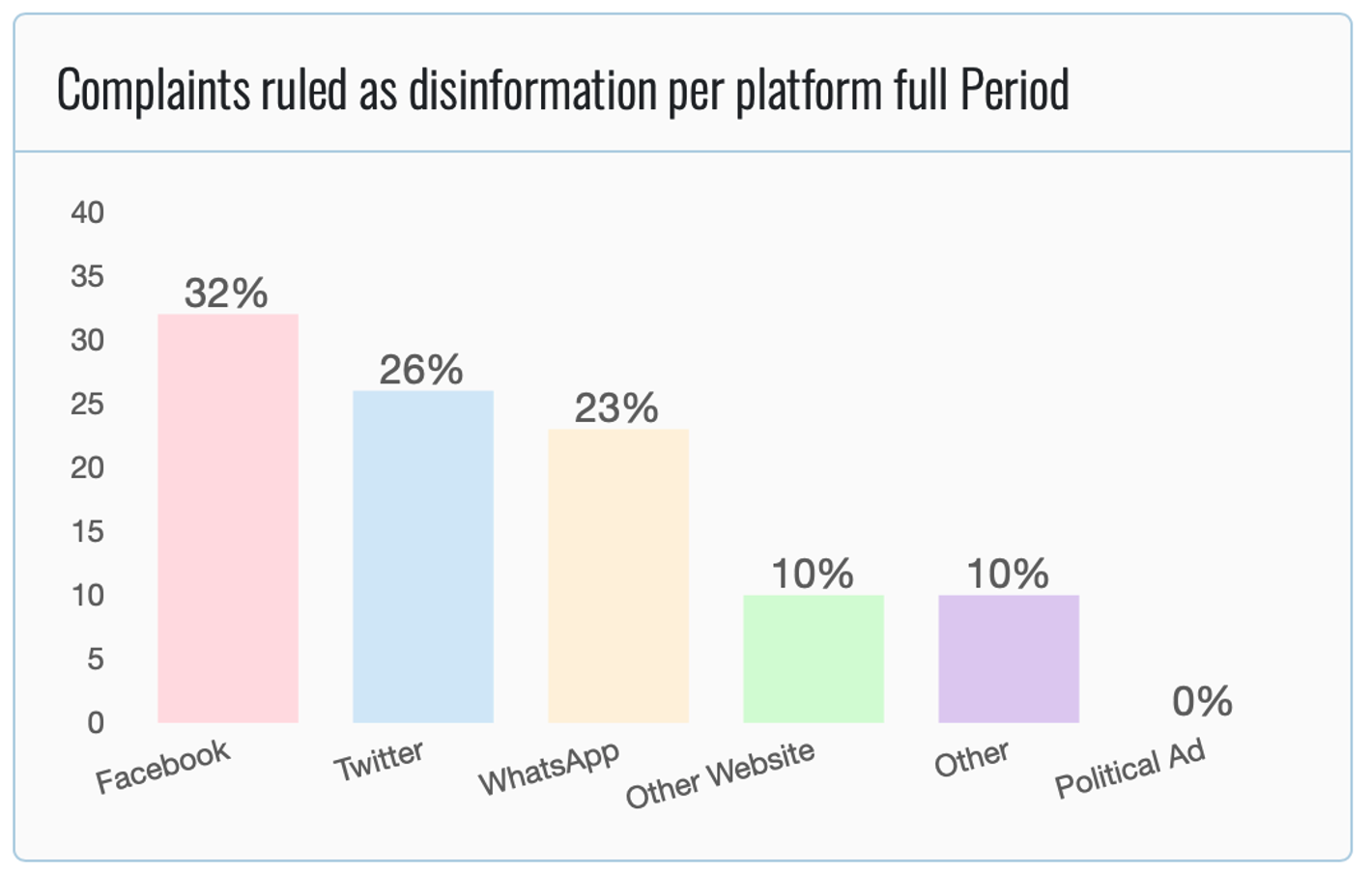 One of the frequent questions we are asked is what is done when complaints are found to be disinformation. For elections-related complaints, as noted in this piece, we cannot make a determination as to whether something is disinformation or not, but we can investigate it and then if we believe it warrants further action, send a request to the platforms to investigate and act if they see fit.

The IEC can of course refer any complaint to the SAPS, or to the Electoral Court. Outside of elections complaints, Real411 can also issue an infographic to encourage people to share the outcome and mitigate the spread and we can also send takedown requests to the platforms concerned. In the period of the complaints that were found to be disinformation (56%), takedown requests were sent in just over a quarter of the cases (26%). The decision as to when a complaint should be sent for takedown is taken on a case-by-case basis by the secretariat of Real411 and will depend on a number of factors including the seriousness and potential harm as well as urgency.

Another key conclusion we draw is that the actions by a member of the public who submitted a complaint matters and makes a difference as it can lead to disinformation being stopped in its tracks.

We need people to keep on standing up and reporting those who seek to exploit fears, against those who display no compassion and seek to heighten fear. It won’t stop disinformation, but it may reduce its spread and cause less harm. It is critical that we all play our part in combating and mitigating these digital offences.

If you suspect that content you come across on digital media could potentially be disinformation, hate speech, harassment of journalists or incitement to violence, there is something you can do about it. See something dodgy, do something good, report to Real411.

To make it even more simple, download the Real411 mobile app! The elections may be over, most politicians will disappear again, but the dark forces will continue to seek to cause harm, and Real411 will keep going. Keep an eye out for a more detailed analysis on the specific complaints and trends in the elections. DM