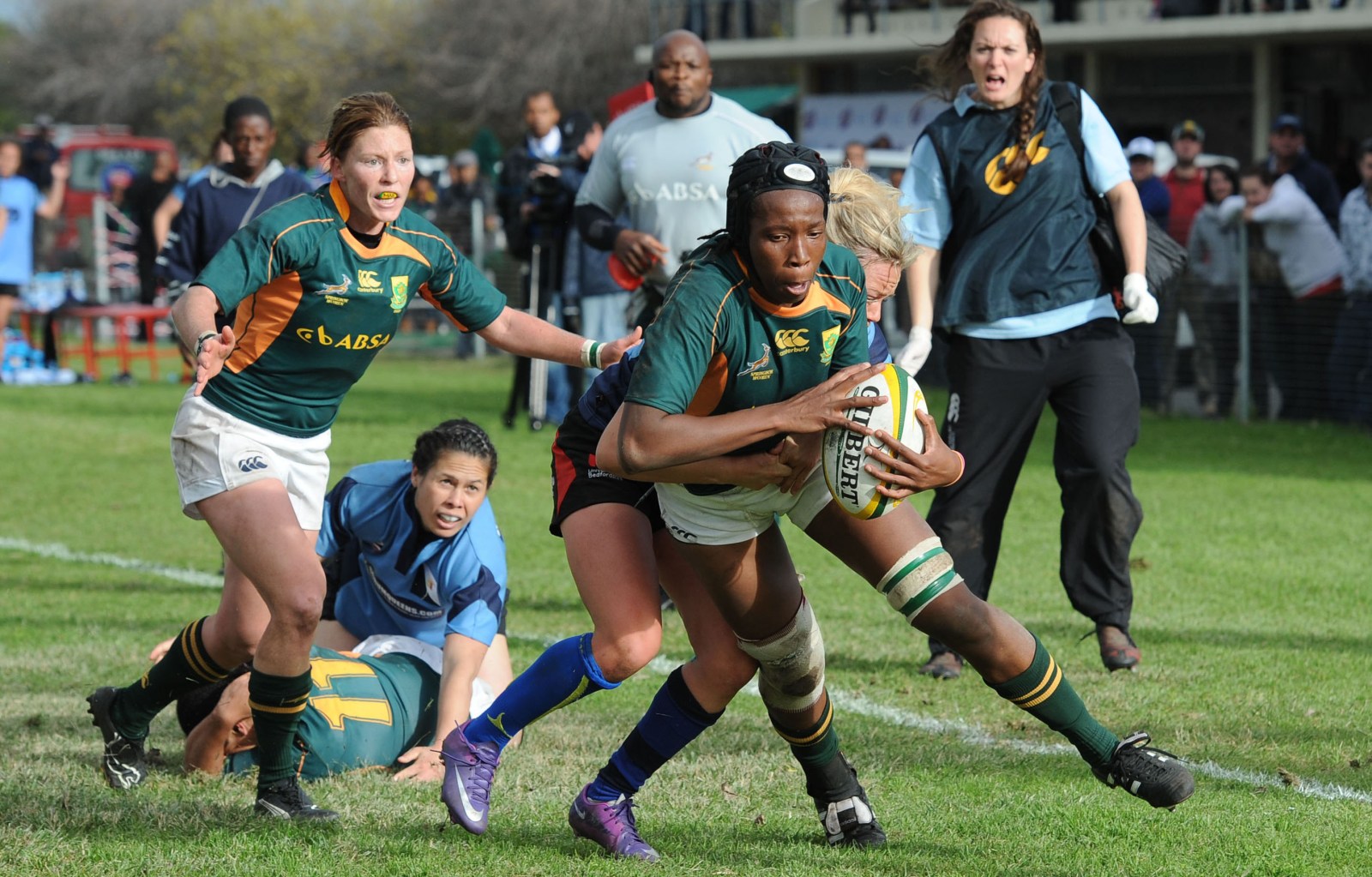 Nolusindiso Booi dives for the tryline during a match between South Africa and Nomads from Goodwood in Cape Town on 30 June 2012. Booi will lead the Springbok Women against France on Saturday. (Photo: Peter Heeger / Gallo Images)

The Springbok Women’s team will be crisscrossing Europe and the UK at the same time as their male counterparts in November.

The long journey to becoming world leaders in rugby takes a giant leap forward for the Springbok women’s team next month with Tests against France and Wales and a match against a Barbarians team.

Stanley Raubenheimer’s team are only ranked 13th in the world and are up against fourth-ranked France and 11th ranked Wales, but this tour is about more than results. It’s about growth and development and about measuring exactly where they are in the world’s pecking order.

The Springbok Women will kick off their tour against France in Vannes on 6 November, after which they will travel to the UK for the Test against Wales at Cardiff Arms Park a week later on 13 November.

The tour concludes with a historic match against the Barbarians Women as part of a unique double-header at Twickenham in London on 27 November, when the famous club will host men’s and women’s matches on the same day.

The last time the Springbok Women faced Wales was in 2018, on their first tour in four years, and they put in a spirited performance before losing 19-5.

“It’s great to have the opportunity to test ourselves against a team that will also be playing at the Rugby World Cup,” said Raubenheimer. “This Test will give us another opportunity to further develop as a team, which is of massive value to our players and our management team. We are really looking forward to this match and the tour.”

Raubenheimer named a squad of 33 players for the tour, which will be the Springbok Women’s first trip abroad since 2018, when they also played matches against the UK Armed Forces, Spain and Italy.

Lynne Cantwell, high performance manager of the women’s game at SA Rugby, said the opportunity to tour and play against top-class international opposition would aid development as they prepare for the 2022 Rugby World Cup in New Zealand .

“The tour is shaping up to be a challenging outing for our squad, but the only way to improve will be to play regularly against international opposition,” Cantwell said.

“We’ve already made a big step up in various areas of the game and when in Europe, there will be more opportunities to fine tune as we build towards the Rugby World Cup.”

Experienced campaigners Nolusindiso Booi, Babalwa Latsha and Tayla Kinsey, who missed out on the Tests against Kenya earlier this year, will form the backbone of a callow squad.

But it’s a sign of the growth of the women’s game that six uncapped players were included – Roseline Botes, Lerato Makua, Monica Mazibukwana, Simamkele Namba, Nadine Roos and Tania Scholtz – with Booi (24 Tests) and Zenay Jordaan (28 Tests) the most experienced members of the tour squad.

“It’s great to have a number of our more experienced and exciting players back. We’ve kept a keen eye on the progress made by Nolusindiso, Babalwa and Tayla after they missed out on facing Kenya, and it will be good to have them with us in Europe as they know what it’s all about,” Raubenheimer said.

“The Test series against Kenya was a great way for the ladies to return to international action after a very tough Women’s Premier Division competition earlier this year.

“The next step in our Rugby World Cup 2022 plan is to travel abroad and get the players to experience rugby in different conditions, against very strong opposition.

“All 33 of these players were part of our previous camp, when we played two Tests against Kenya, and they have been on a strict training and testing programme outlined by our strength and condition coach, Naasier Parker, while they also attend regional skills sessions, to ensure we hit the ground running at the end of October.”

The 2021 Women’s Premier Division interprovincial tournament has been a further boost to the game and has been crucial in preparing the squad for this tour.

“The provincial tournament was huge for our development,” Cantwell said. “It was the first time we had a competition with a double round of matches.

“Players only improve by playing, so having 10 rounds of games was vital. All of the provinces made a huge effort to upgrade how they were operating and what they were doing to improve the women’s game.

“Provinces spent more time on performance growth of women’s rugby. It also allowed the girls in the women’s programme to play many more minutes.”

Although women’s rugby has been played for years, it feels as if it is finally being taken more seriously.

Cantwell’s appointment has been vital towards this, and she believes that for the sport to flourish, people need to approach watching it with an open mind.

“It is relatively new and therefore relatively new to everybody’s eyes,” she said. “They need to decide whether they like this or not, but I think they will find they will like what they see.

“People have to realise that the women’s game is different – styles, strategies, stories and tactics – because there is more space and there are different ways to exploit that space.

“We’re working hard on developing the players from a technical and tactical point of view but also providing good frameworks for the girls to be better. No men’s rugby player is going to be good if he has only played 20 games in his life.” DM168