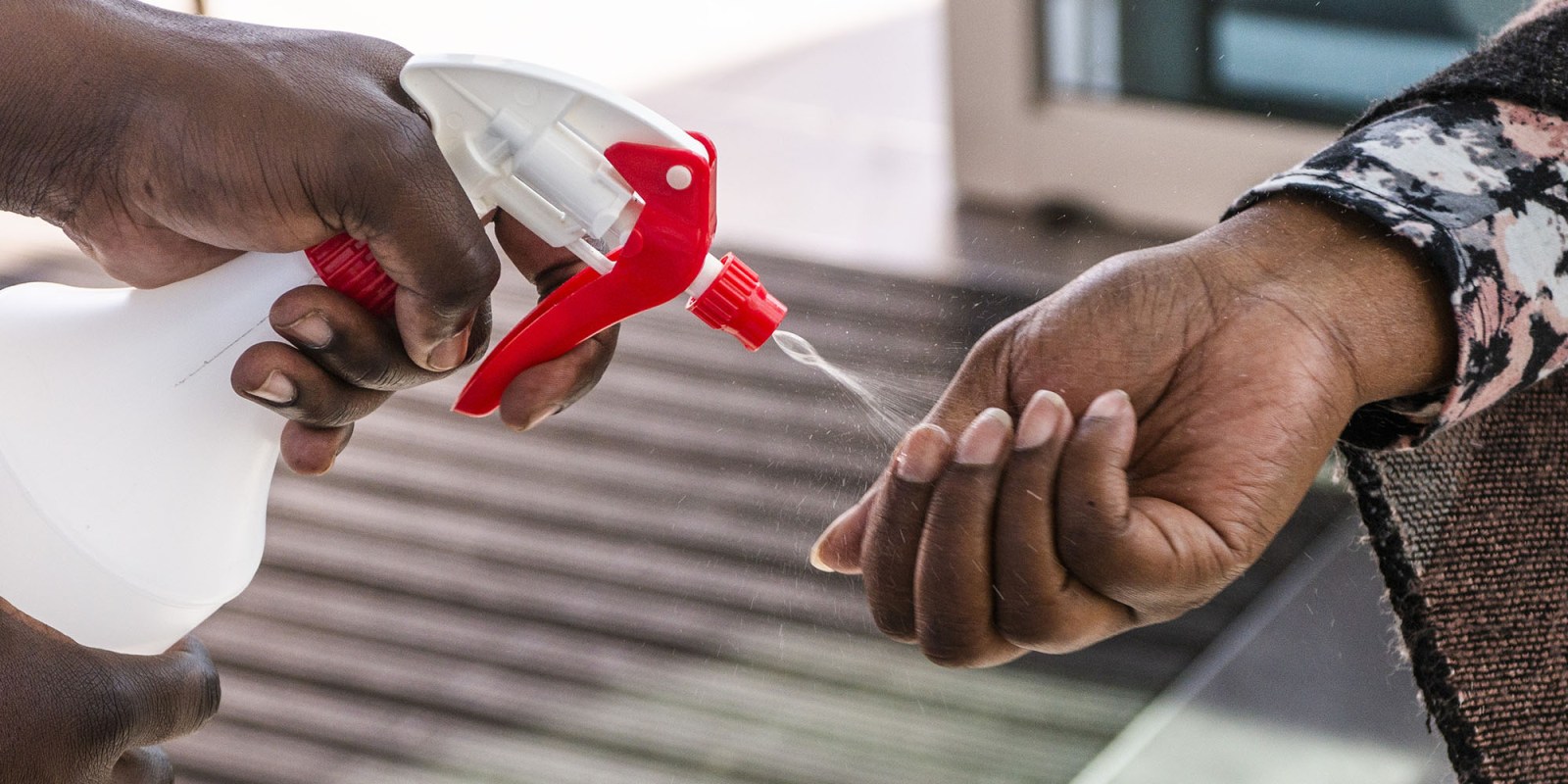 A worker sprays sanitiser on the hands of a shopper in Johannesburg. (Photo: Waldo Swiegers / Bloomberg via Getty Images)

Moderna said its vaccine showed a strong immune response in younger children in a late-stage clinical trial, paving the way for submission to regulators for clearance in those aged six to under 12.

The Biden administration issued new rules for travellers to the US on Monday, requiring proof of full vaccination against Covid-19 in addition to a recent negative test for the virus. US Covid hospitalisations dropped to the lowest since 31 July.

Beijing plans to quarantine athletes competing at the 2022 Winter Olympics for 21 days if they haven’t been vaccinated, according to initial guidelines released on Monday. China has locked down thousands of people in the north, warning that new infections will increase in the coming days after the latest outbreak, fuelled by the Delta variant, expanded to 11 provinces. 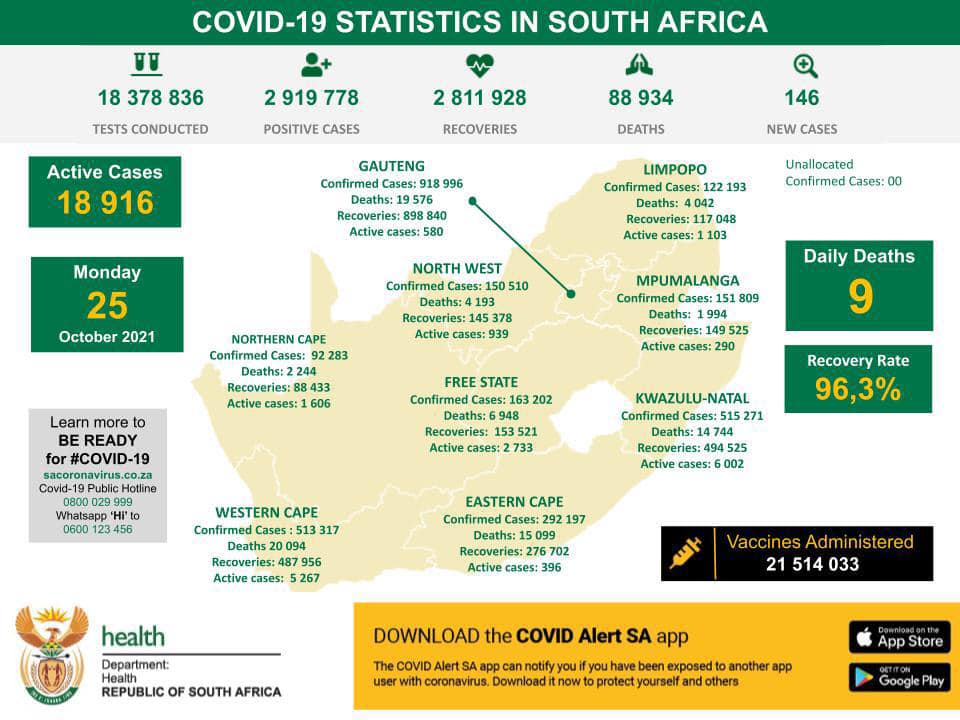 The mandate was “far broader and more coercive” than similar measures taken by the federal government and other states and municipalities at a time when covid infection rates are declining, the Police Benevolent Association of the City of New York Police said in a lawsuit filed on Monday in state court in Staten Island.

The Biden administration issued new rules for travellers to the US on Monday, requiring proof of full vaccination against Covid-19 in addition to a recent negative test for the virus.

People from countries with low supplies of vaccines who aren’t travelling on tourist visas, and those under 18, will be exempt from the vaccine requirement, senior administration officials said in a briefing for reporters.

US citizens and residents returning from abroad who aren’t vaccinated will have to obtain a negative Covid-19 test within a day of their flight, the officials said.

The new rules taking effect on 8 November represent the biggest change to US travel policy since the start of the pandemic. The procedures replace a system that flatly barred most foreign nationals coming directly from major markets including Europe, India, Brazil and China.

Covid-19 is more likely to cause rare neurological conditions than vaccines, according to a study published in the Nature Medicine journal.

The study, led by the University of Oxford, analysed the health records of 32 million people in England to identify the risks of developing rare brain conditions before and after testing positive for Covid, or receiving the first dose of either the Oxford-AstraZeneca or Pfizer-BioNTech jabs.

Rare cases of such complications led many countries to restrict the use of the Oxford-AstraZeneca vaccine to older age groups.

New York City Mayor Bill de Blasio had a Moderna booster shot during his daily press briefing on Monday, part of his effort to encourage New Yorkers to get an extra dose. De Blasio, who previously had a Johnson & Johnson shot, said New York has administered roughly 227,000 boosters, but that the city is still trying to get millions of people to get their first shots. About 5.5 million people are fully vaccinated, or about 66% of the city’s residents, according to city data.

New York Governor Kathy Hochul also received a booster shot as the cameras were rolling, at an event in Binghamton.

Moderna said that its Covid-19 vaccine showed a strong immune response in younger children in a late-stage clinical trial, paving the way for submission to regulators for clearance in those aged six to under 12.

An interim analysis showed a protective antibody response from children in the study, Cambridge, Massachusetts-based Moderna said on Monday. Participants received two 50 microgram doses — half that initially given to adults — spaced 28 days apart.

Health officials are aiming to get immunisations to younger children before the holiday season, when travel and indoor activity can bring an increased risk of infection. As more adults are vaccinated, children are now making up a greater proportion of US Covid cases amid the spread of the Delta variant.

China plans to quarantine athletes competing at the Beijing 2022 Winter Olympics for 21 days if they have not been vaccinated.

China has pursued a zero-tolerance approach to containing Covid that has included steps such as closing its international borders, mass testing and aggressive contract tracing. Still, infections have flared intermittently and increased in frequency since the highly infectious Delta variant was first identified in the country in May. With just over three months to go before the opening ceremony, the host city itself has seen a recent flare-up in infections.

The pace of vaccinations in the Czech Republic quickened after the government announced last week that health insurance companies will stop funding free coronavirus tests.

The country had given 118,000 doses of Covid-19 vaccines in the seven days until Sunday, compared with 60,000 in a week ended 17 October, Prime Minister Andrej Babis said. The country slightly tightened curbs, including wearing masks in all indoor and outdoor spaces as of Monday to tackle exponential growth in new Covid-19 infections.

The Philippines’ Health Department has approved a recommendation from local experts to administer Covid-19 booster shots on health workers and adults 60 years and older starting this quarter.

The approved guidelines dated 13 October generally recommend booster shots of the same vaccine brand. Those who were inoculated with Covid-19 vaccines from Moderna, AstraZeneca and Sinovac can also have an additional dose of the Pfizer shot. For those with weak immune systems, including those undergoing cancer treatment and dialysis, a third dose of the same vaccine brand is being recommended.

The finance industry is ratcheting up pressure on Hong Kong to ease its strict quarantine rules and abandon its zero-Covid policy after a survey found almost half of major international banks and asset managers are contemplating moving staff or functions out of the city.

In a letter sent over the weekend to Financial Secretary Paul Chan that was seen by Bloomberg News, the Asia Securities Industry & Financial Markets Association, the top lobby group for financial firms in the city, said the hardline approach has put Hong Kong’s status as a financial centre, its broader economic recovery and competitiveness at risk.

Singapore’s Ministry of Health has instructed the Protection from Online Falsehoods and Manipulation Act (Pofma) Office to issue a Correction Direction to the “Truth Warriors” website for assertions related to the effectiveness of Covid vaccines, the use of ivermectin as a treatment and more.

Indonesia’s President Joko Widodo pushed for travel to reopen in southeast Asia, saying this would help economic recovery in a region that has seen coronavirus cases recede.

He said the Association of Southeast Asian Nations needs to hit its vaccination target of 70% of the population of more than 650 million as soon as possible so that economies could reopen safely.

Jokowi, as the president is known, has been pushing for a regional travel corridor arrangement since late last year. Instead, each country has set up bilateral deals with nations around the world, with Singapore reopening to North America and Europe while Thailand scrapped quarantine rules for 46 countries while excluding Indonesia.

China locks down thousands in north

China locked down a county that has seen the most Covid-19 cases in the country’s latest Delta outbreak, as an initial flare-up in the northwest quickly spirals into a nationwide surge.

Ejin, a county in northwestern China’s Inner Mongolia, has asked its 35,700 residents to stay home from Monday and warned of civil and criminal liabilities should anyone disobey the order, state broadcaster CCTV reported, citing a local government statement. The small county bordering Mongolia is the current outbreak’s hotspot, home to nearly a third of the more than 150 infections found over the past week in the mainland.

The lockdown came a day after a warning from National Health Commission officials that the outbreak would continue to worsen after spreading to 11 provinces in about a week. China reported 38 Covid infections on Monday, half of which were found in Inner Mongolia.

South Korea will begin a “gradual return to normal life” in November as 70% of the population has been fully vaccinated, President Moon Jae-in said at the National Assembly. Schools will reopen and small businesses will be revived, he said.

The country will announce details on easing physical distancing rules for a gradual return to normal life, starting on 29 October. DM

With assistance from Elaine Chen.