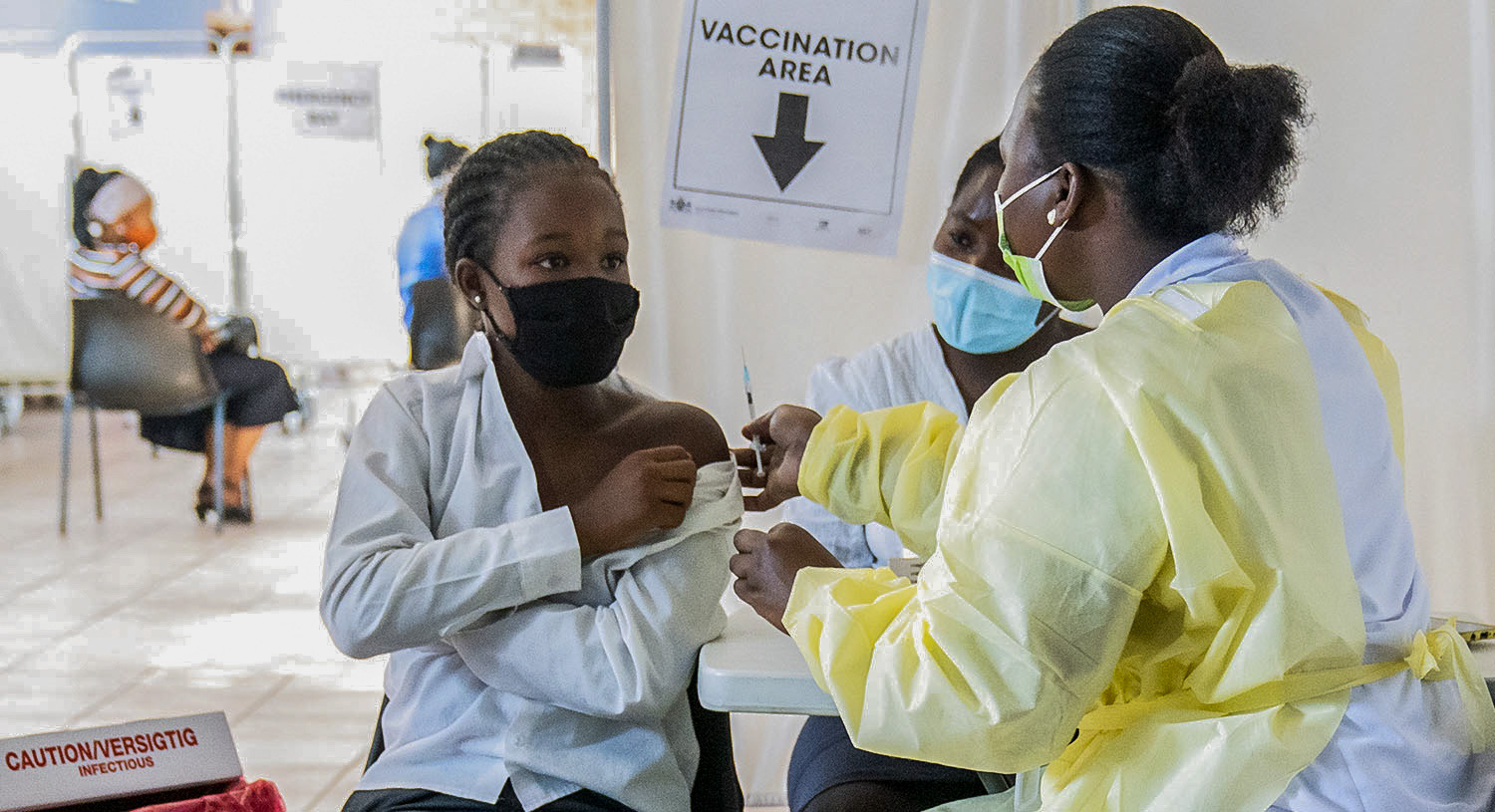 Millicent Nkosi is about to receive her vaccination at the OR Tambo Community Health Centre in Diepsloot, Johannesburg. (Photo: Shiraaz Mohamed)

Thousands of teenagers register for a single dose of Pfizer vaccines, pending an investigation into the risk of myocarditis after a second dose of the vaccine.

More than 13,000 teenagers have received a shot of the Pfizer vaccine after they became eligible for the Covid-19 jab on Wednesday, 20 October.

By Thursday about 69,000 children between the ages of 12 and 18 had registered on the government’s Electronic Vaccination Data System (EVDS) for the vaccine and so far 13,183 had received the jab.

At this stage the South African Health Products Regulatory Authority (Sahpra) has approved a single shot of the Pfizer jab, being marketed as the Comirnaty vaccine, for children between the ages of 12 and 18, pending a review of data on the risk of myocarditis (inflammation of the heart) after a second dose of the vaccine.

Minister of Health Dr Joe Phaahla has explained that the reason only one shot of the vaccine had been approved at this stage was that more information was needed about the possible risk of especially boys developing myocarditis after the second shot.

Mild cases of myocarditis have been identified particularly in boys in the United States after the second shot of the vaccine.

Professor of vaccinology and dean of the Wits Health Faculty Professor Shabir Madhi has set out the risks associated with the Pfizer vaccine as follows:

Madhi said the current hospitalisation rate for children between the ages of 12 and 18 for Covid-19-related complications is approximately 150/100,000 and the incidence rate for deaths is around 2/ to 3/100,000.

He added that 60% to 70% of these deaths are in children with underlying conditions.

A prominent paediatric cardiologist, Dr Adele Greyling, said children with underlying conditions should get the vaccine.

Mothers of children with congenital heart disease, who spoke to DM168 on condition of anonymity, were divided on the issue, however.

One mother, who is vaccinated and also had Covid-19, said her daughter was turning 12 next year but she would consult with doctors first.

Another said her child was not eligible yet for the jab, as she is too young, but when the option became available she would consult with a cardiologist before she made up her mind.

Another said her cardiologist had recommended the vaccine for her children, both of whom have congenital heart problems, but said it would ultimately be her decision.

Some healthy teens this week also received their vaccines.

Mieke Jooste and her sister Chloe, who both got their jabs at the Hope Street Clinic vaccination site in Cape Town, said it was their fear of needles that almost held them back.

Mieke told DM168: “I almost walked away before getting my vaccine because I am not a fan of needles at all. But it’s not as painful as I had anticipated. My arm is numb, but I will be okay.”

Yusuf Abramjee, spokesperson for the Zwartkops Raceway vaccine drive-through, said many teenagers received their Covid-19 vaccinations at the raceway along the R55 in Centurion on Thursday.

“More than 30 children aged 12 to 17 got their jabs in the first three hours. We are now seeing a rush, because schools are out,” Abramjee said.

“We also have a number of 12-year-olds,” he said. “Most were excited … some were anxious and nervous.”

He said a 14-year-old came to get the vaccine and convinced his dad to get one too.

The Zwartkops site was the first to open in Tshwane and more than 26,000 vaccines have been administered over two months. It’s a partnership between the Gauteng Government and the community.

Abramjee said no adverse reactions were reported on Thursday.

The Children’s Act allows children over the age of 12 years and “of sufficient maturity” and mental capacity to understand the benefits, risks and implications of medical treatment to give consent regardless of their parents’ decisions. Lucy Jamieson of the Children’s Institute at the University of Cape Town said: “The Children’s Act recognises and respects children’s evolving capacities and gives them the responsibility to make decisions, but ensures that they do so only if they can understand the choice they are making. There is also a duty on adults to help children make good decisions.”

The United States Food and Drug Administration (FDA) raised the risk of myocarditis and pericarditis (inflammation of the lining outside the heart) for messenger-RNA vaccines such as the Pfizer vaccine, but said it was very low.

The symptoms, according to the FDA, are likely to start within a few days after receiving the second dose of the vaccination. They include chest pain, shortness of breath and “feelings of having a fast-beating, fluttering or pounding heart”.

According to a statement from Sahpra, a single case of myocarditis after vaccination has been reported, but researchers “have not identified any causal relationship between any Covid-19 vaccine and this adverse event. The investigation is ongoing to determine whether this case is coincidental or related to the vaccine.

“You are encouraged to report all cases of myocarditis and pericarditis after Comirnaty® (Covid-19 mRNA vaccine) vaccination to Sahpra via [the] Med Safety App. The App can be downloaded into a smart mobile phone through Google Play or the App Store,” the statement continued.

In the UK, according to its medicine regulator, 10 cases of mild myocarditis have been reported per one million vaccine doses given to children under 18. DM168