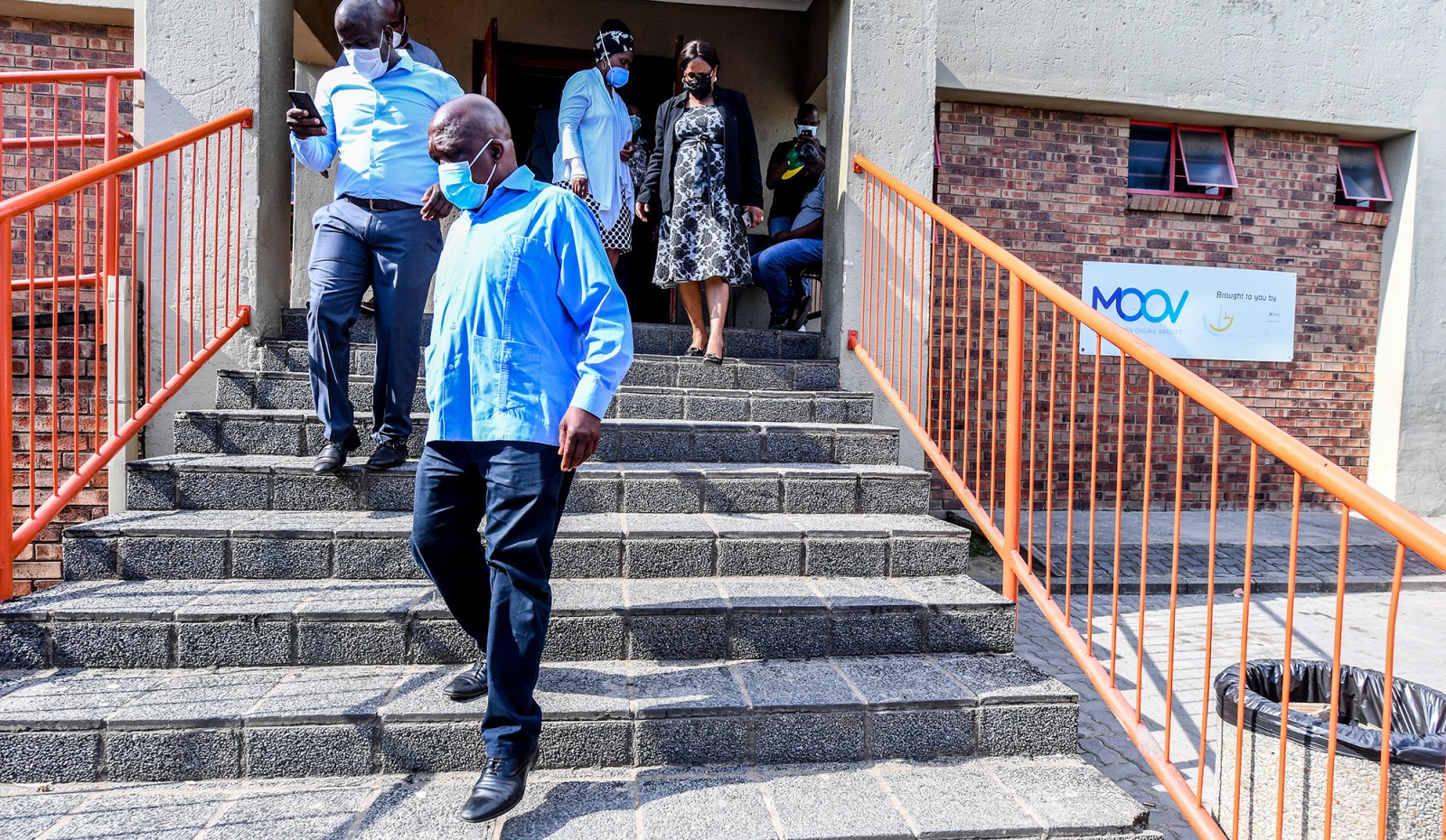 Top US health officials signalled confidence that children aged five to 11 will begin getting Covid-19 vaccines by early November. The Pfizer vaccines will likely be given at pediatricians’ offices rather than at pharmacies or large sites.

China warned that new infections will increase in the coming days after the latest outbreak, which is fuelled by the Delta variant, expanded to 11 provinces.

Russian cases and deaths remained near records on Sunday ahead of strict nationwide curbs. As cases in the UK rise, Chancellor of the Exchequer Rishi Sunak told the BBC that the data don’t currently suggest a need for stronger restrictions. 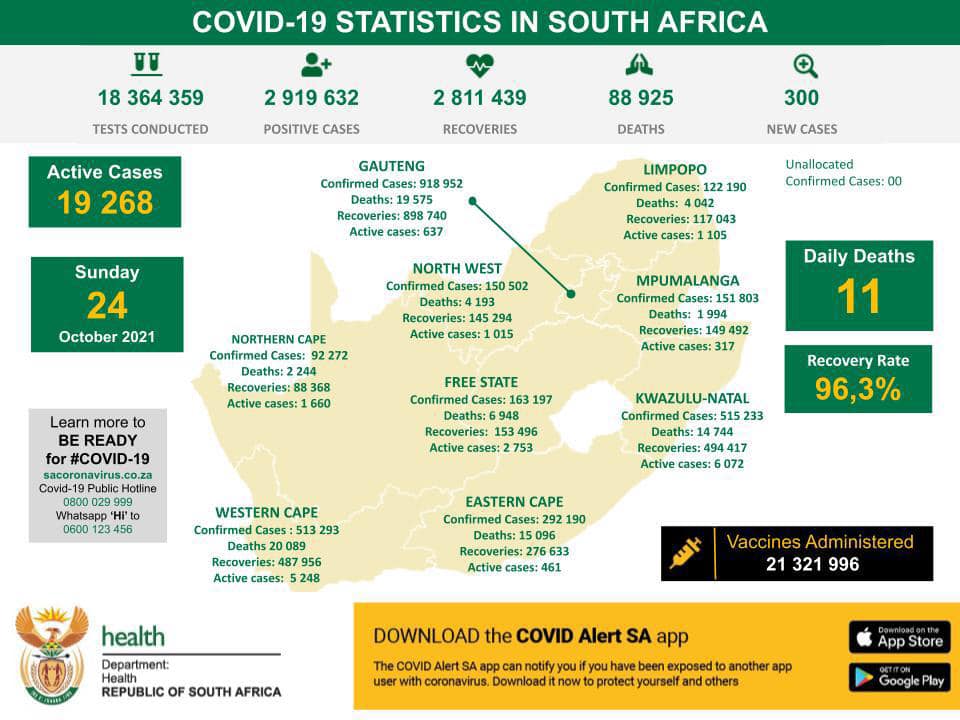 Florida’s new surgeon-general refused to wear a mask offered to him by a state senator who told him she had a serious medical condition – and she ultimately asked him to leave her office.

The encounter, earlier reported by Florida Politics, took place between Senator Tina Polsky and Joseph Ladapo, who met her in her office regarding his upcoming confirmation after being appointed by Governor Ron deSantis. She has been diagnosed with breast cancer.

“He’s very smug,” Polsky said. “And I told him several times, ‘I have this very serious medical condition.’ And he said, ‘That’s okay,’ like it basically has nothing to do with what we are talking about.’”

Ladapo has questioned the vaccine’s efficacy and safety, and like DeSantis, opposes shot mandates. Florida was hit hard by the latest wave of the virus, accounting at one point for a fifth of US cases.

Children aged five to 11 should be vaccinated in their paediatrician’s offices, said Scott Gottlieb, former head of the US Food and Drug Administration. He’s a board member of Pfizer, whose vaccine is to be considered for authorisation for young children.

“Getting children vaccinated is a much more consultative endeavor,” Gottlieb said on CBS’s Face the Nation. “You don’t want children to have to go to mass vaccination sites or even necessarily a pharmacy. You want them to go into the comfort of their own pediatrician’s office.”

He said the vaccine, developed with BioNTec, will be packaged for doctors’ offices.

US kids set for shots by early November

Two top US health officials signalled confidence that children aged five to 11 will begin getting Covid-19 vaccines by early November.

“If all goes well, and we get the regulatory approval… it’s entirely possible if not very likely that vaccines will be available for children from five to 11 within the first week or two of November,” Anthony Fauci, President Joe Biden’s chief medical adviser, said on ABC’s This Week.

His comments were echoed by Rochelle Walensky, head of the Centers for Disease Control and Prevention, which must ultimately approve the shots. “There will be vaccine out there so children can start rolling up their sleeves,” Walensky said on NBC’s Meet the Press.

Health experts say vaccinating children will be a key step in helping end the US outbreak, though a Kaiser Family Foundation study found in September that only about a third of parents would vaccinate their children immediately. Almost 65 million eligible Americans aged 12 and older are not vaccinated.

Advisers to the US Food and Drug Administration will meet on Tuesday to consider data for children’s use of the vaccine by Pfizer and BioNTech. Approval by the FDA and the CDC is also required.

Speaking against a backdrop of rising virus cases and ahead of his Budget this week, Sunak said a return to the furlough programme that saw the government pay as much as 80% of the wages of idled workers was not on the cards. “We don’t envisage having to impose significant economic restrictions in the way that we had to over the last year.”

Malaysia recorded the fewest cases since the end of June.

The Southeast Asian country added 5,666 new infections on Sunday, bringing the total number of cases to more than 2.43 million, according to a tweet by Health Malaysia Director-General Noor Hisham Abdullah. Meanwhile, almost 95% of Malaysia’s adult population has received a complete dose of vaccines, according to the health ministry’s data.

Russian coronavirus cases and deaths remained near record levels on Sunday ahead of the implementation of strict nationwide curbs to stem a surge in infections.

There were 35,660 new cases and 1,072 deaths over the past day, slightly below records set on Saturday, according to data from the national coronavirus headquarters. Last week, President Vladimir Putin ordered nationwide non-working days for the first week of November to slow the spread, while Moscow will be closed for most business from October 28 through November 7.

China’s new Covid-19 infections will increase in coming days and the areas affected by the pandemic may continue to expand.

The current outbreak in China is caused by the Delta variant, Wu Liangyou, an official at the National Health Commission, said at a briefing in Beijing on Sunday. The outbreak has expanded to 11 provinces in the week since October 17, Mi Feng, a spokesman for the commission, said at the same briefing.

Earlier on Sunday, Beijing authorities announced the city is halting cross-province tourism and closing card and mahjong rooms. China’s capital will also cut the number of large events and increase supervision over small clinics and pharmacies, according to the official WeChat account of the Beijing Municipal Health Commission.

Belgian Prime Minister Alexander de Croo will meet with his Cabinet on Monday to discuss the virus situation and consider tighter curbs. The government is mulling a return to stricter mask rules, Belga reports, citing a government spokesman. Belgium, like other European countries, is seeing rising infections, with more than 8.5 million of a population of about 11.5 million being fully vaccinated.

Thailand’s new Covid-19 infections decreased for a second day as the Southeast Asian nation plans to further ease restrictions ahead of a reopening for tourism from October 31. The country reported 9,351 new cases and 56 new deaths on Sunday. DM

– With assistance from Lucille Liu.