Throwback Thursday: Cream of mushroom soup, with a twist of Brie 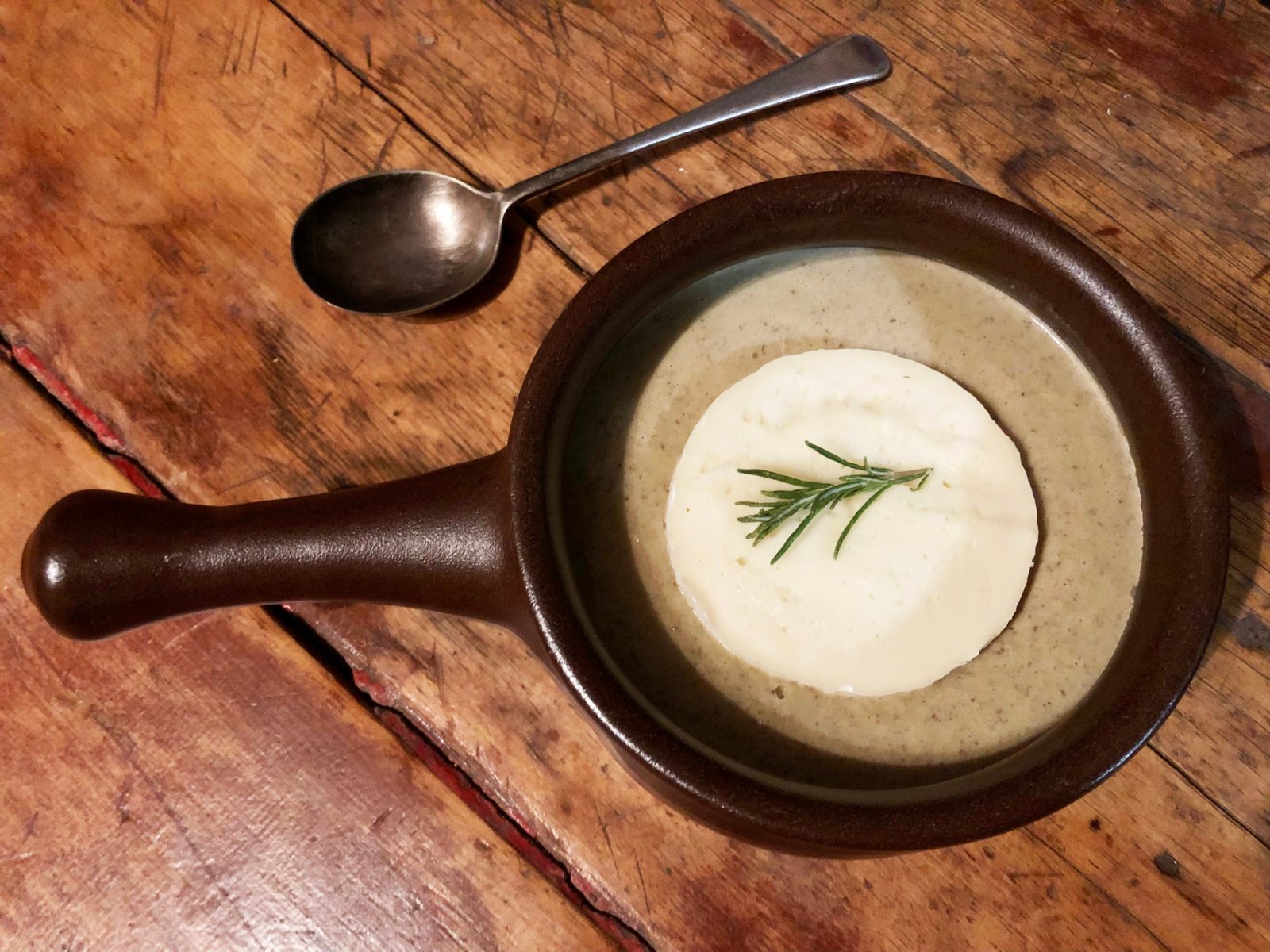 Sometimes a classic, or even a humdrum old recipe long taken for granted, needs a bit of a lift. Enter the common-or-garden cream of mushroom broth, souped up with a slice of Brie.

It’s been called America’s béchamel. Gets added to all sorts of dishes at Thanksgiving, like the vegetable side dish that started off frozen and worked its way up from there on to the groaning table. At which very American dinner a can of Campbell’s cream of mushroom soup may also be in the sauce for the turkey, which may or may not be either under- or over-cooked. It might perchance land up even in the Mac & Cheese which Americans, inexplicably, see as a side dish, just like roast potatoes, glazed carrots or creamed spinach. Into which it might also go.

That sauce in the gravy boat on the Thanksgiving dinner spread has very likely been thickened by Campbell’s condensed cream of mushroom soup ever since 1934 when Franklin Delano Roosevelt was trying to rebuild America’s devastated economy. That was when Campbell’s decided to can mushroom soup.

But it is not nearly as new as its 1934 canning history. Americans claim the soup as their own, and fair dues in the sense that it is a part of their food culture and has been for decades. But a brief examination of methods of cooking it make it clear that the soup derives from the French and Italian cooking traditions; the roux, the reduction to thicken, and in some case the use of basic preparations involving a mirepoix or sofrito, the melange of chopped onion, carrots and celery that send a dish on its way.

On the soup shelves of our supermarkets in South Africa, mushroom soups, whether in cans or powdered in packets, are stacked in their numbers. You may have to dig around to find the asparagus or celery soup, but onion and mushroom soups proliferate.

In South Africa, cream of mushroom soup has often, like brown onion soup, been used as a thickener and flavour enhancer for all manner of stews. I’ve even heard of it being used in a lamb or mutton curry, a thought that is anathema to any self-respecting Indian cook in Durban. And to me.

But I remember cream of mushroom soup as a frequent item on hotel dining room menus in the Sixties. A simple dish which can be plain and unremarkable, but can also be sublime. Just add liquor… and boy can mushrooms take on wine or brandy.

Wikipedia tells us that cream of mushroom soup is “a simple type of soup where a basic roux (flour-butter compound) is thinned with cream or milk and then mushrooms and/or mushroom broth are added”. As is sometimes the case with food or recipe descriptions on Wikipedia, that is a simplification of the making of a soup, as if the making of any soup starts with melting butter and stirring flour into it, then adding, in this instance, mushrooms. That is not the best way to make a soup; the thickening comes later, if indeed you need to thicken it with such a roux at all.

Mushrooms need to be cooked if you’re to get anywhere close to a mushroom soup with depth of flavour. And you’d need to begin, not with mushrooms, but with onion, perhaps with garlic added and simmered in melted butter, and in the case of my recipe here with celery as well. Only after the soup in the making has begun with this flavour base do you need to add the mushrooms, and let them cook for a good 10 minutes so they can develop their own flavours, release their juices, and take on the flavour of the onions and celery as well.

That’s when I would add, not stock or water, but wine. Mushrooms take brilliantly to wine (as they do to lemon juice).

This week I looked at the cheeses in my local supermarket with a view to using cheese of some kind in a mushroom soup. My eye alighted on a little round Brie… I’m glad it did. You might want to try this one…

750 g button mushrooms, halved and/or quartered depending on their size

Pour the cream into a saucepan and pop the rosemary sprigs in. Bring it to a very gentle simmer and let it steep for 10 minutes. Turn the heat off if it starts to bubble too much. Let it cool to room temperature.

Melt butter in a heavy pot and add the chopped onions, garlic and celery. Simmer, stirring, for five to seven minutes. Add the mushrooms, turn up the heat and cook, stirring, until they release their juices and those juices reduce down a fair bit.

Add the wine and cook until there’s about half of the liquid left.

Add the stock and bring back to a simmer. Cook gently for about 10 minutes.

Remove the rosemary sprigs from the cream. Add the rosemary-infused cream and bring to a simmer and let it cook until the soup thickens to a consistency that looks and tastes right. Season with salt and pepper and stir in the mustard. Finally stir in a knob of butter to enrich it.

Unwrap the Brie (try to source a round one that looks like Cambebert, it works better in a round bowl of soup) and slice it in half right through the middle so you have two slim rounds.

Ladle the soup into bowls. Carefully place each half of Brie cut-side-up on the surface of the soup. It will begin to melt into the soup. Garnish with a tiny sprig of rosemary. You’ll notice that I didn’t thicken this soup with a roux at all; it attained all the texture and consistency it needed without that. DM/TGIFood

Tony Jackman is the Galliova Food Champion 2021 for his food writing. His book, foodSTUFF, is now available in the DM Shop. Buy it here.