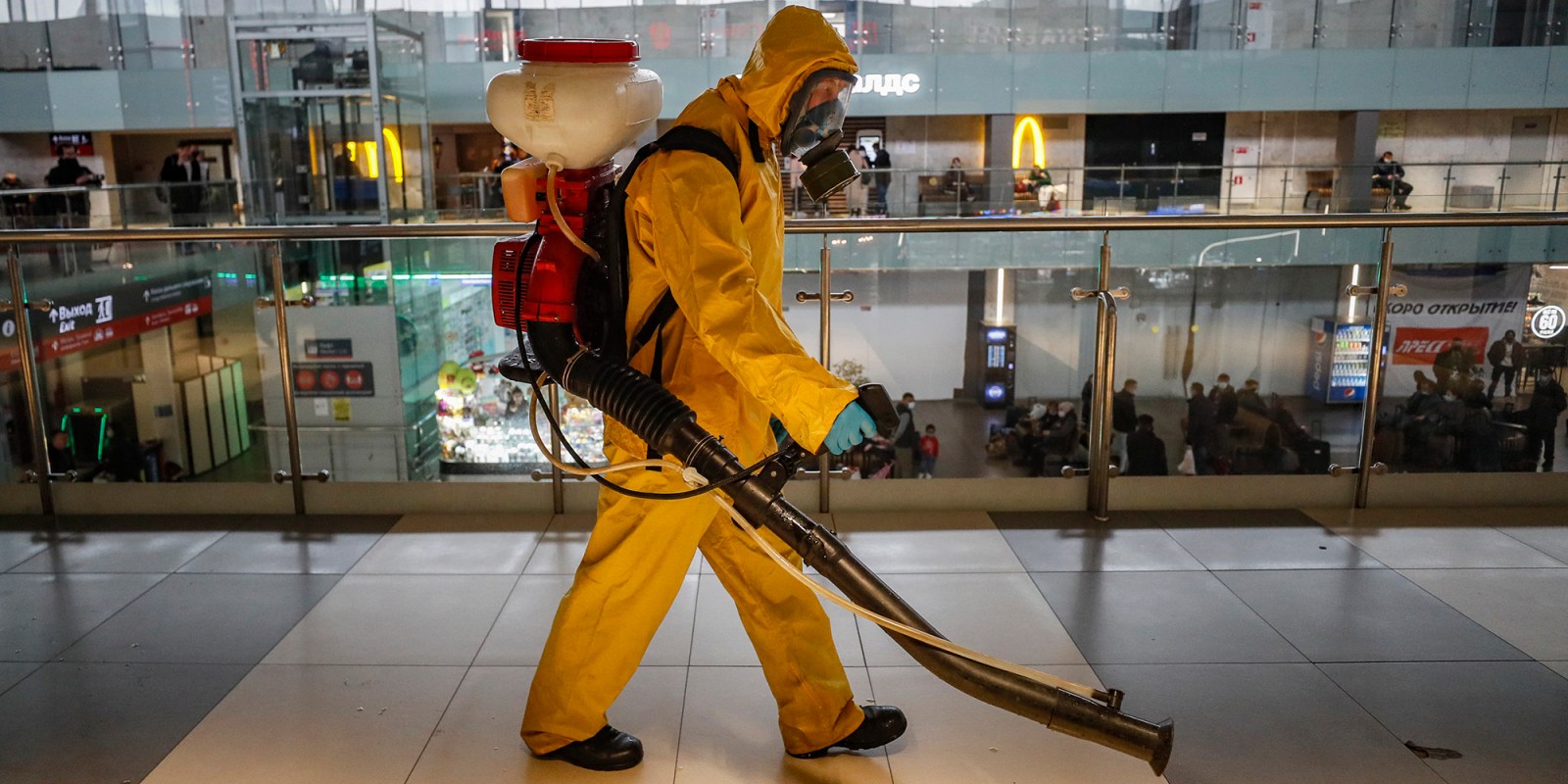 Pfizer’s vaccine is proving highly effective in keeping adolescents from being hospitalised with the disease, according to a new analysis from the US Centers for Disease Control and Prevention. 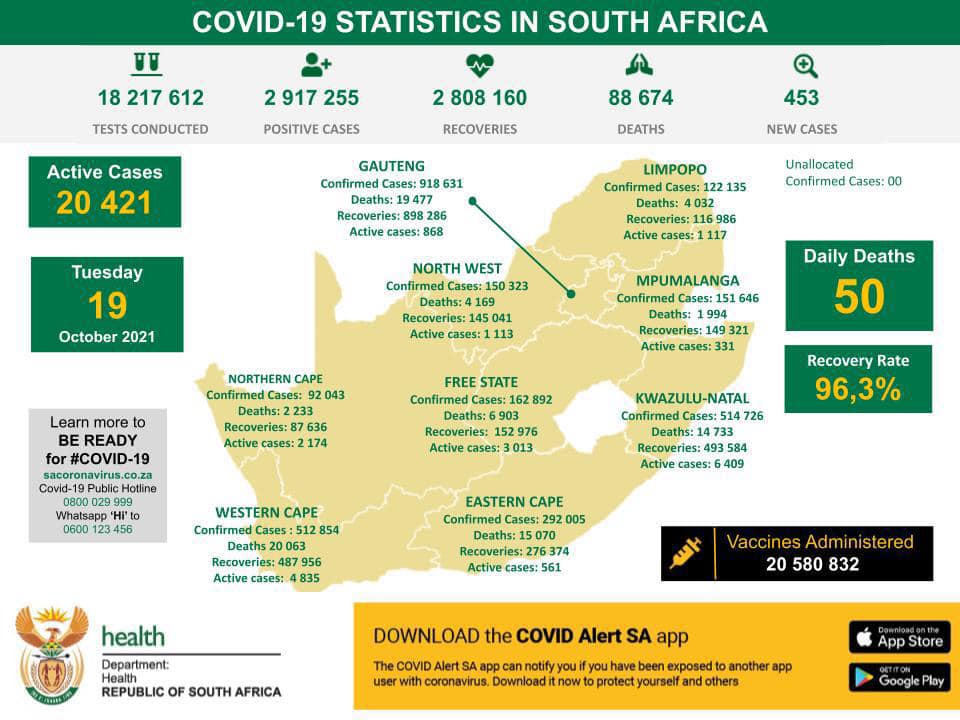 General Electric will require its roughly 56,000 employees in the US to be fully vaccinated against the coronavirus by December 8, or receive a medical or religious exemption by that date. Railroad Union Pacific set a similar mandate.

The US will block entry to foreign travellers who have recovered from Covid-19 and then got one dose of a two-dose vaccine, a standard that France and the European Commission consider full inoculation.

Britain plans to expand vaccine access for children, while the government acknowledged signs of a virus resurgence. Ireland slowed its reopening plan as cases increase, and Russia moved to bring in new restrictions as it battles record infections and deaths.

Union Pacific notified workers on October 11 that they must get the Covid-19 vaccine before December 8 to be in compliance with President Joe Biden’s executive order requiring employees of federal contractors to be fully vaccinated by that date. The railroad moves goods for the armed services.

“All employees are required to report their vaccination status or have an approved medical or religious accommodation by the federally mandated deadline,” Union Pacific said in a statement on Tuesday.

If a medical or religious request is denied, then employees must be vaccinated or face disciplinary action that, for management workers, includes being fired. For unionised workers, those not complying face “medical disqualification”, the railroad said.

US Secretary of Homeland Security Alejandro Mayorkas, who is fully vaccinated, tested positive for Covid-19 on Tuesday morning, the Department of Homeland Security said in a statement. Mayorkas is experiencing mild congestion and will work from home in line with Centers for Disease Control and Prevention protocol and medical advice, the department said.

Pfizer’s Covid-19 vaccine proved highly effective in keeping adolescents from being hospitalised with the disease, according to a new analysis from the US Centers for Disease Control and Prevention.

Among children aged 12 to 18, two doses of the Pfizer-BioNTech shot were 93% effective in preventing Covid hospitalisation, the agency said. The real-world data was gathered from 19 children’s hospitals from June to September, after US regulators cleared the shot for people aged 12 to 15.

The analysis of 464 patients compared those admitted with Covid to others in the hospital who didn’t have the disease. Nearly all of those hospitalised for Covid – 97% – were unvaccinated, compared to about two-thirds of the control group that was unvaccinated.

The Delta variant predominated during the study period, and paediatric hospitalisations reached their highest levels in early September, the CDC said. About half of adolescents 12 to 17 have been fully vaccinated in the US so far. Only the Pfizer-BioNTech shot is authorised for people under 18 in the US so far.

The Estonian government is tightening measures to curb the spread of Covid-19 infections. From October 25, vaccinated people only will be allowed to attend cinemas, cafes, sports and entertainment events. The government also recommends both vaccinated and unvaccinated to work remotely when possible.

General Electric will require its roughly 56,000 employees in the US to be fully vaccinated against the coronavirus by December 8, or receive a medical or religious exemption by that date, the company said in a statement. GE is a federal contractor and said it will comply with President Joe Biden’s order mandating vaccines for workers at those companies.

Southwest Airlines said employees will continue working, while following mask and distancing guidelines applicable to their job, if their request for an accommodation to not receive the coronavirus vaccine hasn’t been reviewed or approved by the December 8 federal deadline.

“While we intend to grant all valid requests for medical and/or religious accommodations, in the event a request is not granted, the company will provide adequate time for an employee to become fully vaccinated while continuing to work and adhering to safety protocols,” the carrier said in an email statement on Tuesday.

American Airlines Group also has decided that workers with pending accommodation requests as of the December 8 US deadline will continue to work as normally scheduled, a spokesman said. While American still is in the process of creating accommodation procedures, “unpaid leaves of absences are off the table”, the TWU-IAM Association union told members in a message on its website.

Unvaccinated people over 60 will have to remain at home for four months starting on October 25, Moscow Mayor Sergei Sobyanin said in a blog post on Tuesday, as the Russian capital faces a surge of infections.

Pensioners will be allowed to take walks and physical activity outside but will otherwise be expected to remain home, Sobyanin said, adding that only about one-third of people in the vulnerable age group had been vaccinated.

Moscow will also increase the percentage of workers facing mandatory vaccination and reintroduce a work-from-home requirement for at least 30% of employees until February 25.

Southwest Airlines is scrapping a plan to put unvaccinated employees that applied for but haven’t received a medical or religious exemption on unpaid leave in December, CNBC reported, citing a note sent to staff.

Britain plans to expand access to Covid-19 vaccines for children, the head of the National Health Service said, following a surge in infections in schools.

Prime Minister Boris Johnson predicted a difficult winter as the government acknowledged worsening data in its pandemic response. Weekly deaths from coronavirus have topped 800 for each of the past six weeks in Britain, which is higher than in other major western European nations, according to Bloomberg’s coronavirus tracker.

“From next year all members of teams working offshore on Shell-operated platforms in the Gulf of Mexico will need to be fully vaccinated,” a Shell spokesperson said in an emailed response to questions. “The safety of our employees and communities is our first priority.”

Ireland’s government moved to further loosen restrictions, though it will retain more rules than planned amid a surge in cases and hospitalisations.

Bars and restaurants will be allowed to resume normal opening hours, but they will still be limited to table service only and customers will need to show proof of vaccination. Full attendance will be permitted at outdoor events and religious ceremonies, though indoor concerts must be all seated.

Other restrictions – including social distancing and masks – are set to remain in place until at least February, while a full return to the office won’t happen until next year. The government had intended to drop almost all restrictions on October 22.

Ireland reported the most new cases since January on Sunday. Hospitalisations are at the highest level since March, though that’s about a third of the January peak.

Russia moved to impose new restrictions as it battles record levels of infections and deaths.

The government is turning to Putin after a week in which daily new infections have passed 30,000 for the first time, with deaths reaching a record high of 1,015 on Tuesday.

Roche shares fell after partner Atea Pharma said its Covid-19 drug failed in a study. Roche signed a pact with the US drug company in October 2020 to jointly develop a potential oral treatment.

The Czech government will on Wednesday debate measures to stem the accelerating spread of the virus, Prime Minister Andrej Babis said. The nation of 10.7 million had 2,521 new cases in 24 hours, the most since April and almost double the number a week ago.

Romania reported its highest number of deaths from Covid-19 since the start of the pandemic, forcing the country to seek assistance from the WHO in an attempt to limit the burden on overwhelmed hospitals.

The country, which has the European Union’s second-lowest vaccination rate, reported 561 fatalities in the past 24 hours. New infections, at almost 19,000 since Monday, also reached a new high.

A crisis expert from the WHO is meeting with the Romanian authorities to try to find solutions to the escalating situation.

Putin will participate in next week’s Group of 20 summit in Rome via video link, the Kremlin said. Russia’s president told Italian Prime Minister Mario Draghi of his plans in a phone call on Tuesday. Chinese President Xi Jinping has indicated he may also take part in the Oct0ber 30-31 Rome G-20 summit remotely.

Finland’s health authorities recommended offering third vaccinations to people over the age of 60, people staying in assisted-living facilities and those at risk of severe illness. DM