OP-ED: ON ANOTHER PLANET 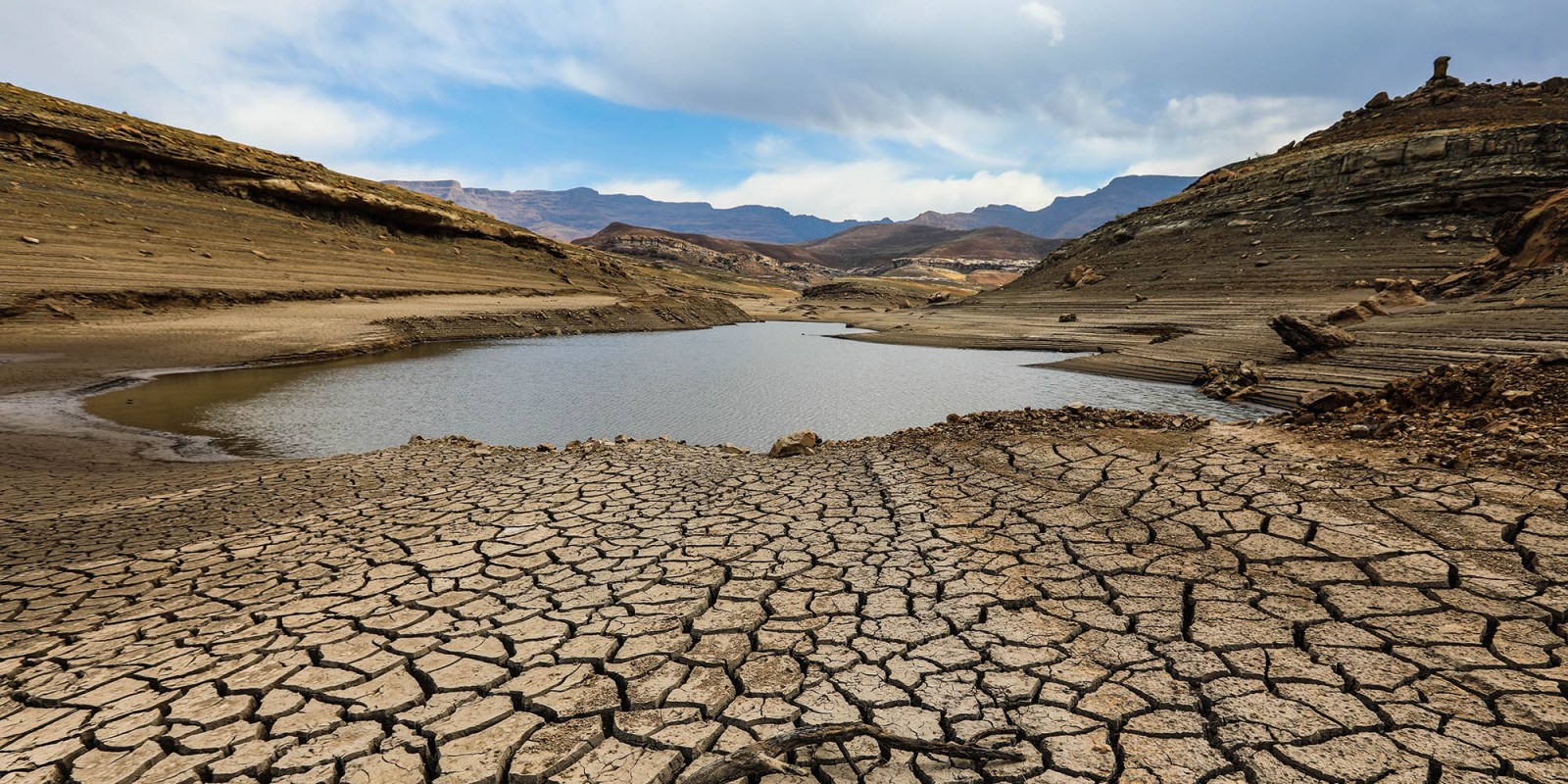 Worryingly, all our political parties seem oblivious to the impacts of the climate crisis as reflected by their shallow manifestos. The three manifestos (ANC, DA, EFF) critiqued below are symptomatic of the broader climate denialism in South African politics.

South Africa is facing multiple crises that threaten its young democracy. Hunger, poverty, unemployment, inequality, rampant corruption and failure to deliver basic services are some of the reasons that have dissuaded  13 million eligible voters from registering to vote in the local government elections on 1 November.

All these problems are being made worse by the climate crisis. Climate shocks such as El Niño-induced droughts, cyclonic storms and prolonged heatwaves have destroyed millions of lives and livelihoods. This is only getting worse.

The Intergovernmental Panel on Climate Change says that in just a decade Earth’s temperature will overshoot 1.5°C. For us in southern Africa, warming at about twice the global average, that will mean an almost 3°C temperature increase. The impacts will be catastrophic.

According to the leading climate scientists, this will collapse the maize crop and livestock industry – especially cattle – and more dams and rivers will run dry. Current climate disasters such as flooding are getting worse, more infrastructure will be damaged and if no mitigation and adaptation plans are adopted with urgency by local governments, millions will die.

Worryingly, all our political parties seem oblivious to the impacts of the climate crisis as reflected by their shallow manifestos. The three manifestos (ANC, DA, EFF) critiqued below are symptomatic of the broader climate denialism in South African politics. The three manifestos were chosen because these are the three largest parties in South Africa. The manifestos are all critiqued through six of the 14 systemic alternatives for transformative change outlined in the Climate Justice Charter.

The ANC manifesto fails to prioritise community-based solutions to social problems. Top-down technocratic approaches to local government planning ignore people’s lived experiences and the way that the climate crisis is affecting them. Such planning ignores the fact that many rural communities are living in perpetual day zero and many small-scale subsistence farmers have stopped farming due to droughts.

The DA’s approach to planning revolves around expert consultation. Experts cannot replace democratic participation, and their expertise should not undermine the daily realities of communities.

The EFF manifesto also undermines democratic planning due to its belief in centralised planning that revolves around councillors. Such a vanguardist approach to local government further weakens democracy and excludes the masses from the decisions that determine much in their lives. Had Parliament adopted the Climate Justice Charter, democratic planning from below would have strengthened South Africa’s democracy and the government would have localised solutions.

The ANC manifesto has no plan for the rapid phase-out of fossil fuels nor does it prioritise lowering the carbon emissions of municipalities. This is a failure for the ruling party. Making Eskom more efficient at emitting greenhouse gases will cement our place as a carbon-criminal state. The ANC will clearly not prioritise local government investment in renewable energy. This is a tragic mistake; the International Energy Agency says there should be no new fossil fuel infrastructure if the world is to reach net-zero by 2050.

The DA plans on using LED streetlights. This is a good development. However, the party stops short of prioritising investment into a new renewable energy nexus for municipalities.

The EFF has no plan to phase out coal nor does it even bother to promise to tackle the crisis of South Africa’s carbon emissions which have made the country a carbon-criminal state.

Feed ourselves through food sovereignty

The pledge to prioritise urban agriculture and community food gardens is something that we and other civil society groups have been calling for. We are glad that the ANC has adopted it in its manifesto. However, the party has no plan to transform agriculture which perpetuates inequalities, and its narrative of food security is misplaced because the crisis of hunger in South Africa is not due to production, but access to food.

The DA has no plan to transform the current agriculture model nor does it have a plan to help small-scale farmers and informal traders.

The EFF doesn’t propose transformative changes in agriculture. However, its pledge to prioritise rural farmers is welcome.

Despite knowing that South Africa’s water demand will outstrip supply by 17% in under 10 years and despite the El Niño-induced droughts, the ANC has taken a casual and ignorant approach to water. Almost 40% of municipal water is lost due to leaks in pipes – this cannot continue in a heating world. Unfortunately, the ANC manifesto is lacklustre on this.

The DA has no understanding of water as a commons. Its manifesto reflects a party that sees water as nothing more than a taxable commodity, something from which municipalities should make money.

The EFF acknowledges the obvious, that South Africa needs rapid water infrastructure construction. However, it ignores the impact of the climate crisis on South Africa’s water system. Typical of opposition politics, there are more political points in blaming the ANC’s failed infrastructure projects than acknowledging climate realities.

Many South Africans are reluctant to use public transport because it is often unsafe and unreliable. But the fact is, public transport use will lower our carbon emissions and ease the burden of cars in our cities. Unfortunately, the ANC manifesto does not reflect this vision for its municipalities, nor does it embrace eco mobility, walkways and bicycle lanes.

The DA fails to prioritise rail for cargo transportation; that would ease the truck backlogs that damage roads and emit tons of CO2. Sustainable roads like the Jeffreys Bay eco-friendly road (mixed with plastic) are a welcome strategy by the DA. This could be a game changer in road construction and plastic recycling.

The EFF has no eco-mobility pursuits other than the ordinary transport developments of road infrastructure using tar and carbon-intensive concrete.

Rights of nature and climate solutions

Municipal oversight is crucial in fighting polluters. The ANC manifesto fails even in pledging to strengthen the Green Scorpions and make sure that companies abide by the regulations of the National Environmental Management Act (Nema, 1998). Beyond punishing the polluters, the time has come for the rights of nature to be enshrined in our Constitution. Municipalities should take the lead in this.

Just like the ANC, the DA fails to prioritise the rights of nature and its solutions to municipal problems are not climate solutions.

The EEF approaches rights of nature from a liberalised perspective. Its “Municipal Protected Area Expansion Strategy” is a liberal approach to conservation, one that privatises biodiversity to a few reserves. The charter rejects this and calls for ecocentric living, and understanding that we coexist with nature. The EFF’s plan to give incentives to companies that limit their pollution levels is at best misguided. What South Africa needs is a local government that will punish and criminalise companies that pollute the environment and violate section 24 of the Constitution and Nema, not a local government that will give companies incentives just for not destroying ecosystems, biodiversity and livelihoods. 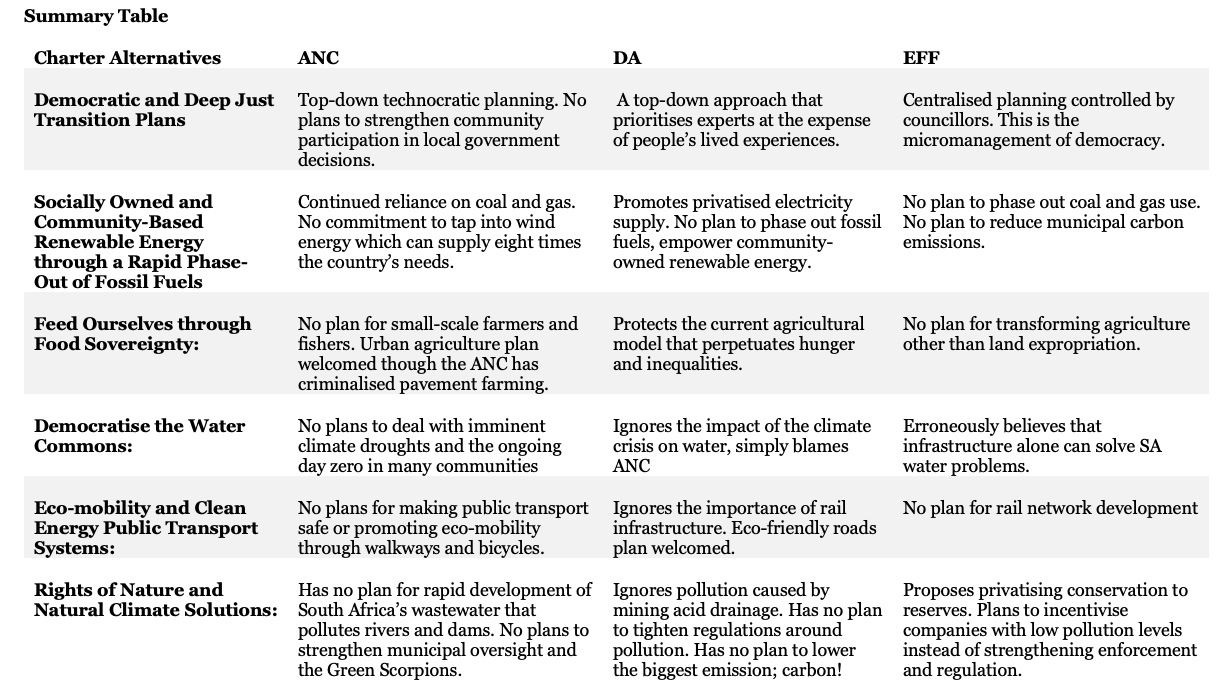