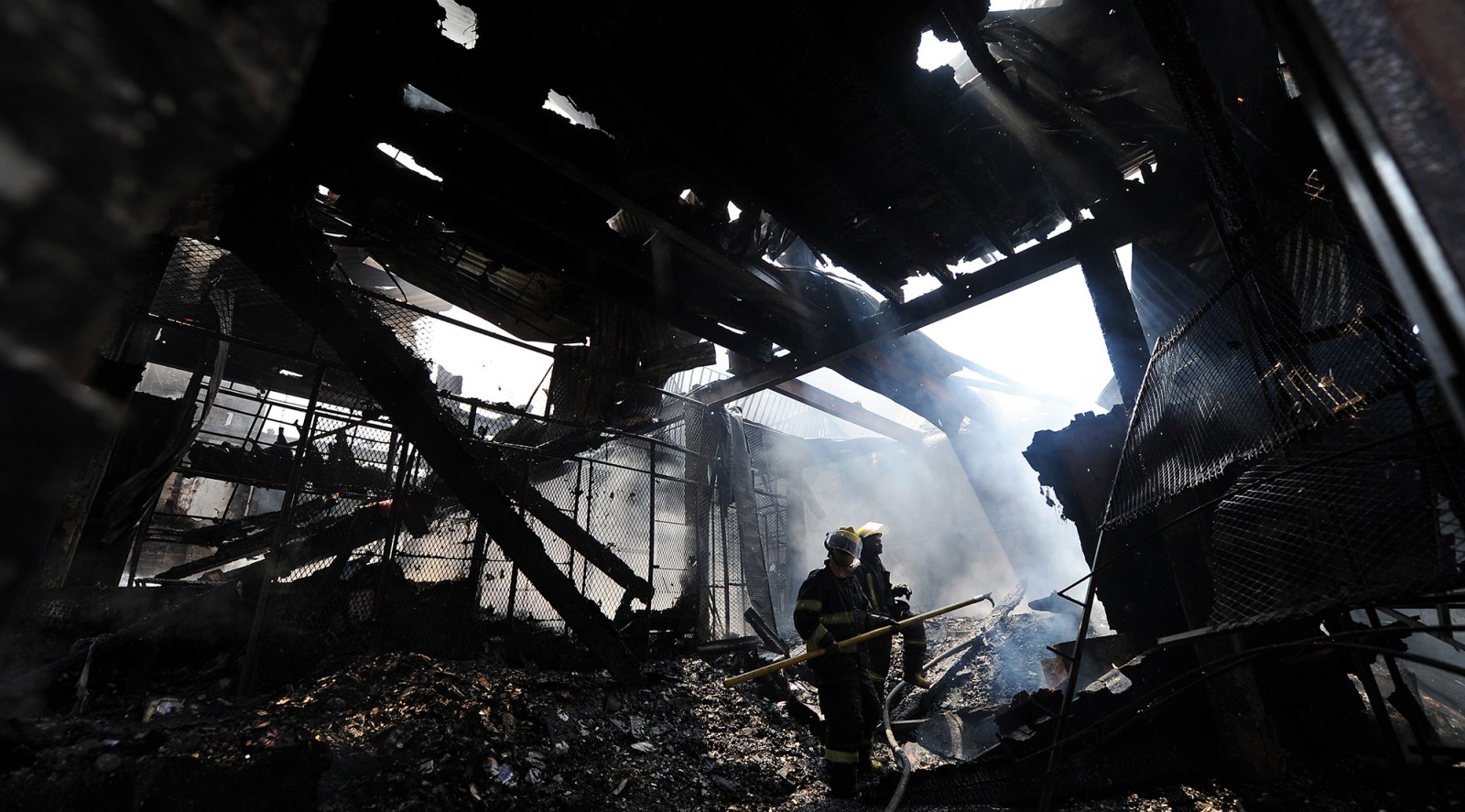 Johannesburg firefighters try to extinguish a blaze at a building in the CBD on 6 March 2018. Robert Mulaudzi, City of Johannesburg Emergency Services spokesperson, has confirmed that a shortage of fire engines continues to pose a challenge. (Photo: Gallo Images / Netwerk24 / Felix Dlangamandla)

The City of Johannesburg’s firefighting service is in such a dire situation that a private company is stepping in to fill the gap, raising fears that such emergency services could become reserved for those who can afford them.

After several critiques by residents and a court of law, there has been little to no improvement in the City of Johannesburg’s firefighting capabilities in recent years, opening a gap in the market for private fire brigades.

Robert Mulaudzi, City of Johannesburg Emergency Services spokesperson, confirmed that a shortage of fire engines continues to pose a challenge.

According to recent reports, the number of available fire engines in Joburg at any given time is significantly lower than 12. Mulaudzi said the city’s fire engines are old and spend most of the time at workshops instead of being on the road serving the residents of the city.

Mulaudzi downplayed the crisis, saying Johannesburg has about 1,500 reported fire incidents annually across its 30 fire stations. While refusing to give details on average response times, he said should the emergency services have any situation beyond its capacity, other metros can help.

“As an interim measure, the city has in place a ‘memorandum of understanding’ with the neighbouring municipalities, the City of Tshwane and Ekurhuleni, for support and assistance in the case of major fire emergencies where the city’s available resources may be inadequate to respond,” said Mulaudzi.

That’s likely to be of little comfort to Johannesburg residents who rely on local services to respond to fires promptly to reduce loss of life and property.

In an emailed response to Daily Maverick on how many times the Tshwane Emergency Services had heeded the call to assist the City of Johannesburg, spokesman Thabo Charles Mabaso said three times, including the Bank of Lisbon fire in 2018, the Charlotte Maxeke Hospital fire in 2021 and the China Mall fire or Dragon City Warehouse fire in 2021.

“We respond as backup resources during major incidents or disasters to all Gauteng metros, district municipalities and other municipalities beyond, when requested,” said Mabaso.

While the City of Johannesburg struggles to fulfil its obligation to establish and maintain adequate firefighting capabilities, private firefighting company Fire Ops SA has stepped in to fill the gap.

Wynand Engelbrecht, CEO and fire chief at Fire Ops, said, “We established the private services about four years ago because of the obvious vacuum created when the Johannesburg City Council proved for the umpteenth time that they were not able to procure fire engines when one effort after another fell flat. They are still in that position, with a very small improvement these past few months.”

Led by former city firefighters, Fire Ops claims it works differently in that it operates from six patches or satellite points across Johannesburg and operations run non-stop.

“It’s either you call the 24-hour emergency line or use the Fire Ops reporting app that places the call in the phones of all crew within 60 seconds, including position coordinates,” said Engelbrecht.

Fire Ops operates within the Greater Johannesburg footprint and classifies about 60% of its services as “community commitment”, work it responds to at no charge, while 40% is for subscribing clients, including industrial, commercial, fleet management and homeowners.

“Homeowners in general pay R35 per month or rather R420 per annum in advance as a basic retainer; then, when we attend to a fire at such a person’s property, we bill them for the operation. They pass the bill on to the insurer, who then covers the expense,” said Engelbrecht.

The emergency services refused to comment on the privatisation of firefighting services. Mulaudzi said, “About the private services, I don’t want to comment about them because they are not complying with the [Fire Brigade Services Act].”

Fire Ops SA appears to be the only private firefighting service in Gauteng. Engelbrecht said, “We are completely within the law to provide the service to our residential and corporate clients.”

Michael Sun, a DA councillor in the City of Johannesburg and former MMC for Public Safety, expressed concern about private fire services.

“Emergency management services such as fire and medical rescue cannot be a privilege reserved for those who can afford [them]. These must be a basic right to service delivery regardless of one’s socioeconomic position.

“This is why I believe that the government needs to partner with the private sector to boost emergency rescue service, but also regulate to ensure that it does not become an exclusive service based on affordability,” said Sun.

The deteriorating fire service system has resulted and is still resulting in the deaths of residents and firefighters and the avoidable destruction of hundreds of millions of rands worth of buildings, assets and businesses.

Over the years there have been multiple reports of lives and buildings being claimed by fire incidents as a result of the City of Johannesburg’s broken firefighting system. Among those that made headlines are the Bank of Lisbon fire of 2018, and this year’s Gazine informal settlement fire and the Charlotte Maxeke hospital blaze.

Thobile Zungu, a resident at Gazine informal settlement near Kwa Mai Mai market in the Johannesburg CBD, said she lost everything in the April fire.

“If only izicishamlilo [the fire brigade] was here on time, maybe some of my belongings would have been salvaged. Even more, the nine lives lost to the fire might have been saved.

“I can’t stop but wonder if the city is even able or ready to respond to any fire emergencies. They are useless. It’s either they respond too late to the emergency or they come with half-full water tanks,” she continued.

The city’s plans to procure new fire engines were delayed under both the ANC and DA governments as rival bidders went to court. According to Mulaudzi, the procurement process is now finally under way.

“Good news to our residents is that we have received a budget to procure new vehicles and the process is at an advanced stage, which will remedy the current situation and assist us to render effective emergency services to all our residents at all times,” he said.

The procurement plan is divided into two parts:

Although the city seems to put its firefighting problems down to its lack of fire engines, that lack might merely be a symptom of its failing emergency services, meaning private firefighting services like Fire Ops could be here to stay.

According to Engelbrecht, the emergency services have more serious shortcomings that include a lack of professional incident command and fireground radio communications.

“The situation was seriously worsened by the fact that the municipal structures do not conform to the national requirements, let alone the operational standards set out by the Fire Brigades Services Act that relates to firefighting and rescue that require a superbly coordinated and well-developed management plan,” said Engelbrecht.

Sun admitted the collapse of the emergency services had been caused by negligence on the part of city administrations, causing a major drop in firefighters’ morale.

Oliver Wright, who works in the private emergency services sector, but was commenting as a Johannesburg resident, said the fire and rescue portfolio in the city had been in a steady state of decline since at least 2012.

“While politicians may argue that the fleet of fire and rescue vehicles operated by the City of Johannesburg has aged past its useful life, the reality is that a number of the fire engines within the city fleet would still be fully operational if they had simply been properly maintained.”

Wright said the city under the administration of both the ANC and the DA had continued to appoint incapable and inexperienced candidates for the role of the MMC for public safety, who, in turn, had failed to appoint capable fire chiefs. DM