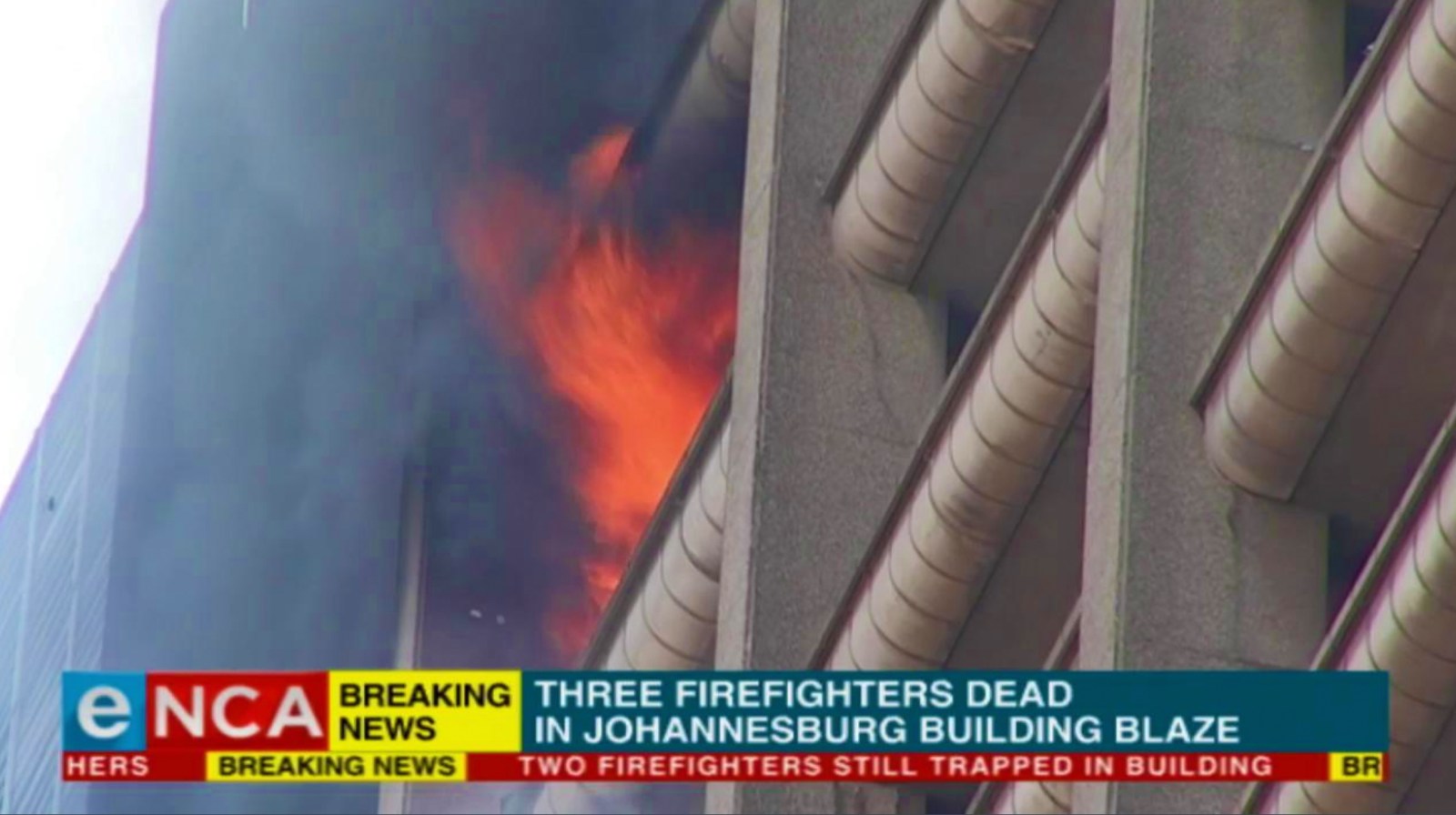 Three firefighters died fighting a blaze in a government building in central Johannesburg on Wednesday, one falling to his death from near the top of the 24-storey office block. Gauteng Infrastructure Development MEC Jacob Mamabolo said a recent inspection had found the building’s safety compliance rate stood at 21 percent. The acceptable rate is above 85 percent.

The 24-storey building in the Johannesburg CBD that went up in flames on Wednesday morning, claiming the lives of three firefighters, had been declared unsafe after a recent inspection by Gauteng provincial authorities.

One firefighter fell to his death from the 23rd floor. The other two died in the flames and smoke inside the building.

“I just saw a fire. From where I was I saw commotion all around the building and downstairs. A little while later as I was still looking up in the direction of the fire I saw a figure resembling a human falling from the same floor where the fire seems to have started. The 23rd floor to be exact.”

By midday emergency personnel were still busy taking down the names of those who needed medical attention. About half a dozen women were treated from ambulances and then transported to hospital.

A fire warden announced from a loudspeaker that all employees would be provided with counselling services. Employees were requested to assemble at Library Gardens.

One health employee said he had fled and left everything, including his car keys and laptop, at the office.

An evacuation leader told Daily Maverick that the building did not have safety facilities such as functioning fire extinguishers. She said emergency exit routes were inadequate.

“Those are the factors that were most outstanding for me in terms of limiting the effect of harm.”

The building had been assessed along with eight other government-owned buildings. The report had been released on 27 August, Mamabolo said.

“We received a report on all the buildings and the condition of each. The reason for the investigation into the building’s compliance was to see if components of each building complied to safety standards or not.”

“We found that the buildings were not compliant with occupational safety. On this building we discovered non-compliance,” Mamabolo said.

Mamabolo said the provincial government would further improve all safety standards in case any disaster that may require the evacuation of people might be necessary.

The provincial department resolved that all employees who work in the building should stay at home. They would be told in due course where they should report.

Mamabolo said the provincial government was not aware of what had caused the fire. This would be communicated “at the right time”.

“We can’t speculate on the causes of the fire at this stage because we don’t have feedback from qualified people. As the City of Johannesburg we’ll get a report as to what caused the fire,” he said.

The investigation by the province had identified eight government-owned buildings which needed to be checked, Mamabolo said.

“We are not in denial about that. That’s the same reason we commissioned the investigation.” Mamabolo confirmed that the investigation report had been released. The provincial government will study the report on Thursday, he said.

He emphasised that focus would be on the Bank of Lisbon building.

“We are aware of the condition of the building. The building is not compliant at all,” Mamabolo said.

“There are risks to our buildings. People bring appliances, and people could bring faulty appliances to the building — 21 percent as the compliance cap is just unacceptable,” he said.

People were still being evacuated from the eighth floor by 2.30pm. They had been trapped on the lower floors for several hours. Two people were being evacuated at that point, and officials said both were emergency services employees.

Johannesburg Emergency Services were seen lifting stretchers to the eighth floor, but initially denied this indicated more people had died in the blaze.

Mamabolo told journalists at 2:50pm that there were still two people to be rescued, while JMPD’s Nana Radebe confirmed that two emergency workers had died in the blaze. This put the number of fatalities at three.

Johannesburg member of the mayoral committee for public safety Michael Sun vowed he would leave the scene only when everyone had been evacuated.

Mamabolo said the provincial government would work with the city and national government to convey an appropriate message to the loved ones of those who had died.

He also confirmed that 13 health employees were taken to the Milpark Hospital after being referred by the Charlotte Maxeke Johannesburg Hospital. According to Mamabolo, most were affected by smoke inhalation.

“Let me also just announce that from the Department of Human Settlements we have not received information of loss of life,” Mamabolo said.

Mamabolo and other Human Settlements officials confirmed that an instruction had been issued to employees that floors one, two, five and six or the Bank of Lisbon building were not fit for occupation. DM