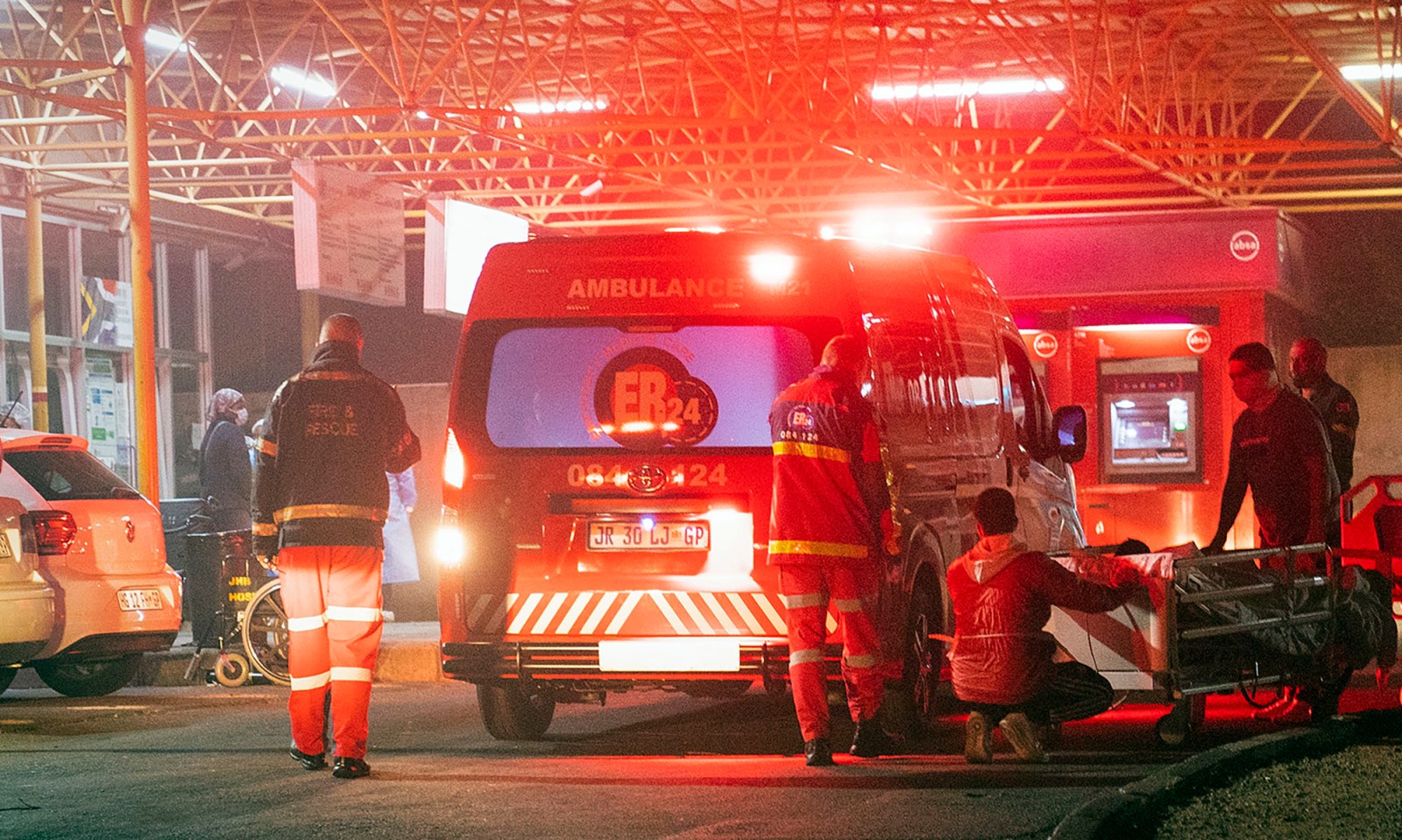 The scene at the entrance of the hospital as patients were evacuated on Friday night, 16 April. (Photo: Shiraaz Mohamed)

The response to the fire at Charlotte Maxeke Academic Hospital, the second-largest tertiary hospital in the Southern Hemisphere, has been hailed as a collaborative effort between public and private actors that saved lives and limited damage to property. But it’s raised questions about the City of Johannesburg’s ability to respond to fires and whether state institutions are prepared for such emergencies.

“As far as cooperation was concerned, we couldn’t have asked for a better day,” said Wynand Engelbrecht on the response to the fire that broke out at Charlotte Maxeke Academic Hospital on Friday, 16 April.

Engelbrecht worked as the City of Johannesburg’s fire chief in Midrand and also served as a former force commander in Sandton. Three years ago, he launched Fire Ops, a small private firefighting brigade that operates in a number of Johannesburg areas.

Fire Ops leaders heard of the fire at Charlotte Maxeke on social media and sent three of their vehicles, which are smaller than the usual fire engine but have high-tech equipment, to help.

Engelbrecht has become somewhat of a media go-to on Joburg fires, and in interviews, he has hailed the city’s “sterling work” at the hospital. The fire at Charlotte Maxeke saw public and private organisations collaborate to extinguish the blaze and evacuate more than 800 patients to other facilities.

Firefighters worked tirelessly over Friday and Saturday and healthcare workers, NGOs, private ambulance services and volunteers ensured there was no loss of life as patients were shuttled to other hospitals.

Inspecting the damage on Tuesday, Health Minister Zweli Mkhize called the fire “a crisis with a happy ending”.

Engelbrecht told Daily Maverick that the response was, actually, “a disaster”. Joburg EMS divisional chief Synock Matobako did not respond to questions sent by Daily Maverick.

The City of Johannesburg’s lack of fire engines has been well documented and attempts to procure more vehicles have repeatedly been marred by irregularities.

At any one time, the city reportedly has between four and seven fire engines available to service its 30 fire stations and millions of residents. The cities of Ekurhuleni and Tshwane have agreed to provide support in the case of emergencies.

According to Engelbrecht, only one fire engine was deployed to Charlotte Maxeke, the second-largest tertiary hospital in the Southern Hemisphere. That engine had to drive up and down the road to ferry water from an off-site hydrant because the hospital’s hydrants were not either not working or lacked the necessary connections.

If two fire engines had been deployed, they could have taken turns to replenish their water supplies and continuously fight the fire and limit its spread, claimed Engelbrecht.

EMS’s Matobako told SABC that the firefighting equipment inside the hospital had no water. “We seem to be finding a trend; it is like a trend that is happening with most of the buildings that we respond to,” he said.

Gauteng health communications head Motaletale Modiba told 702 that the provincial Department of Infrastructure audited the hospital in October or November 2020 and found its fire hydrants were in working order.

At the time of writing, representatives from the Gauteng Department of Infrastructure and the national Department of Labour had not responded to inquiries about audits of the hospital’s compliance with health and safety laws.

Engelbrecht’s Fire Ops had ten staff members on the scene while the city’s EMS team included around 30 members. Engelbrecht said there were obvious failures in both the hospital’s preparation for an emergency and how EMS fought the blaze.

The fire started at around 11.30 on Friday morning at a hospital dispensary store. Initially, it only affected a car park but it soon threatened to spread. The decision to evacuate patients was only taken on Friday evening and the last patients were only evacuated on Saturday morning.

Dr Suhayl Essa, who works at the hospital, told Sunday Times that staff initially thought the fire was under control but they were called in on Friday night to assist with the evacuation.

He helped move patients out of the antenatal unit and said it was full of smoke.

“There were patients lining the corridors,” Essa told Sunday Times. “We were effectively triaging patients, selecting those we needed to be transferred urgently.”

Engelbrecht said the hospital did not have an adequate emergency plan, which should have dealt with how to handle patients on oxygen and in isolation wards for Covid-19.

He claimed hospital and provincial government officials only took the decision to evacuate after he raised the alarm.

“It was a sad sight to see. It wasn’t an evacuation, it was running for your life,” he said, having also witnessed smoke-filled wards.

Engelbrecht rubbished claims that the hospital could reopen within a week. The effect of the smoke, he said, would leave equipment, curtains and walls covered in soot and could cause structural damage, he said.

“It will be criminal and negligent to move those people back into that hospital.”

Mkhize said structural engineers are currently assessing the damage. He said patients would not return “until we are certain that the place is structurally safe and that the areas that were damaged have been corrected”.

The cause of the fire is still under investigation. Premier David Makhura said he expected to receive a report on the cause by the end of Tuesday but it’s unclear whether he received the report or when it might be released.

The response to the fire and the hospital’s alleged lack of preparedness has raised further questions about the province’s ability to maintain its infrastructure and the city’s ability to respond to emergencies.

In a statement, the National Education, Health and Allied Workers’ Union said, “The fact that the fire raged on for many hours proves that occupational safety measures are not adequately adhered to at the hospital.

The Public Servants Association warned the provincial government to “not gamble with the lives by resuming hospital business without a health and safety clearance certificate”.

The DA’s Jack Bloom said, “The devastating fire at the Charlotte Maxeke Johannesburg Hospital is the fourth hospital fire in Gauteng in six years, and past inspections of Gauteng public hospitals have revealed widespread lack of compliance with the Occupational Health and Safety Act.”

He continued: “Previous fires took place at Carletonville Hospital in February this year, at Bheki Mlangeni Hospital in May 2019, and Tambo Memorial Hospital in May 2015. Another fire started at the head office of the Gauteng Health Department in the Bank of Lisbon building in September 2018.”

In 2017, the Department of Labour inspected seven Gauteng hospitals for biohazard and other safety issues. Each one failed to meet the required safety standards. Charlotte Maxeke was not one of the seven inspected facilities.

In a statement in February 2021, the DA’s Alan Fuchs called on Makhura to release the criminal investigation report into the Bank of Lisbon fire.

“The reason for lack of safety standards in Gauteng’s building assets is that the Department of Infrastructure Development does not possess the skills nor resources to implement the legislation required to maintain the conditional integrity of the infrastructure,” said Fuchs.

Days before the fire at Charlotte Maxeke, nine people died in a blaze at the Gazine informal settlement, near Johannesburg’s Kwa Mai Mai Market.

According to Engelbrecht, the City of Johannesburg should have more than 100 fire engines. A recent court ruling ordered a service provider to deliver a number of vehicles and the city has said it is launching another procurement process to purchase more fire engines.

Engelbrecht claimed that Joburg’s EMS response call centre handles emergency calls poorly, the city lacks a range of crucial equipment, such as the “jaws of life”, used to extract people trapped after car accidents, response times are too slow and that firefighters are demoralised.

“Those are symptoms of a disease,” he said, pointing the finger at city executives and the procession of acting fire chiefs who are rotated through the top job.

“They do not have a grip on the department,” he added.

While it remains closed, Charlotte Maxeke Academic Hospital has diverted major services to various healthcare facilities around the province, some of the details of which can be found here. DM