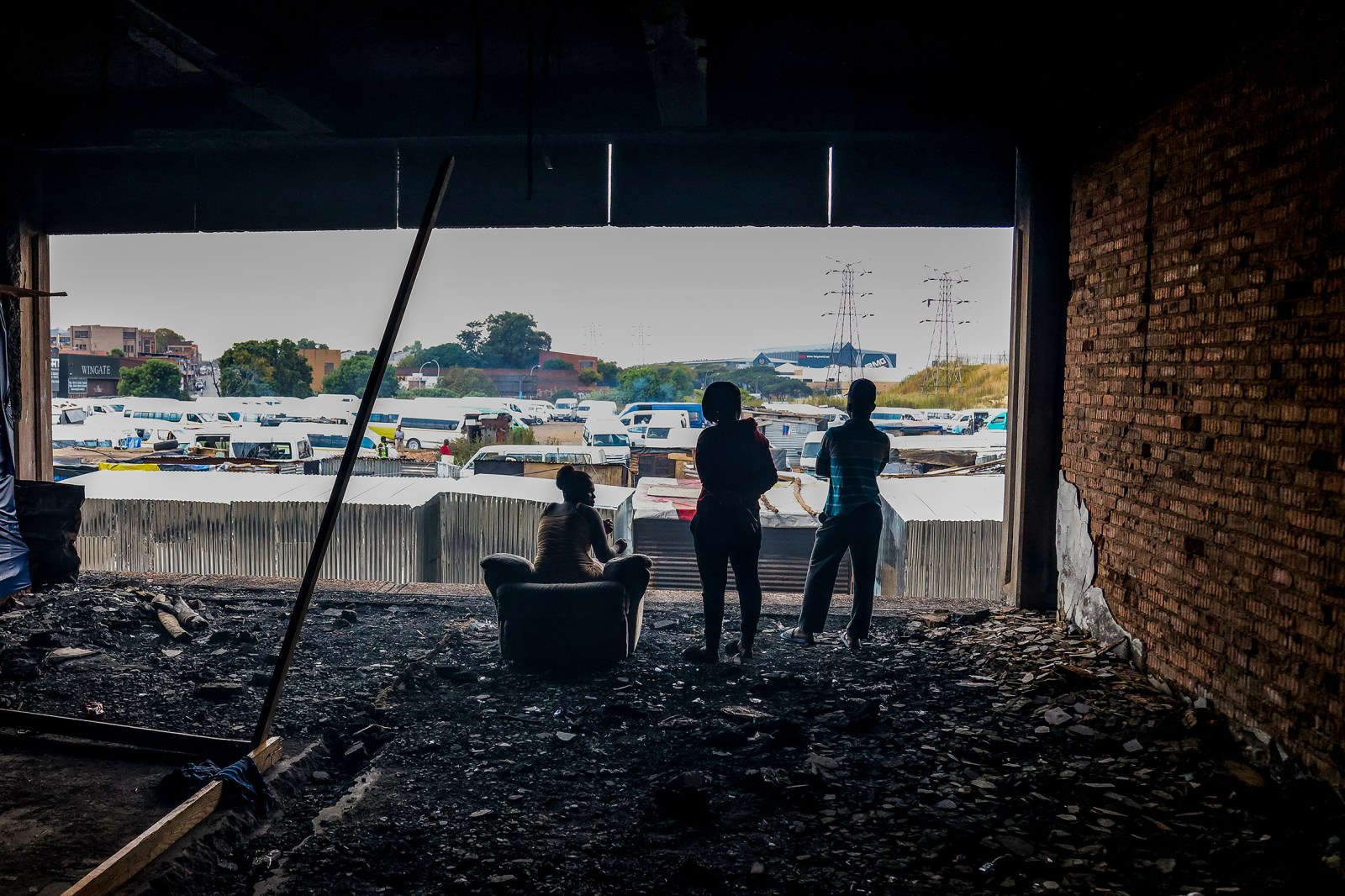 Homeless residents look out of an open space. All that remains behind is a couch. Photo / Shiraaz Mohamed

Residents of an informal settlement near Kwa Mai Mai Market in the Johannesburg CBD have rebuilt their shacks just days after they were razed by a fire which also claimed nine lives, including a family of three.

Nkosinathi Nazo, 31, owes his life to his neighbours.

When a fire broke out in the Gazine informal settlement, near the Kwa Mai Mai market in the Joburg CBD, in the early hours of Wednesday morning, Nazo was dragged out of the inferno by neighbours.

Several weeks ago Nazo fell from the second floor of the building which once served as a garage while fixing his shack, breaking his legs.

“I was sleeping when the fire broke out,” said Nazo, recalling Wednesday’s fire. Were it not for his neighbours, Nazo may have been the 10th person to die as a result of the blaze. Instead, he now considers himself one of the luckiest survivors.

Originally from the Eastern Cape, Nazo has been staying in the building, owned by the City, for the past two years and described it as “worse than hell”.

Zethu Majola, 38, said she was devastated at the sight of all the dead people and the mayhem which ensued. “I wish I could go and stay elsewhere but I have nowhere else to go. Our desperate circumstances got us here and we are trapped.”

Majola said she only managed to save her toiletries bag and lost everything else, including her identity document. Many residents were left with only the clothes they had been wearing when the fire broke out.

Majola described her pain at watching relatives of her fellow tenants arriving to look for their loved ones and not finding them. “They are not even sure where to look… in mortuaries or hospitals,” said Majola.

The cause of the fire is still being investigated but Vusumuzi Zondo, councillor for Ward 61 – the ward in which the building falls –  told Daily Maverick the fire was caused by illegally connected electricity.

More than 100 individuals and 97 shacks were affected. Zondo said families of only four of the deceased had stepped forward to claim their loved ones. He said the other five victims remained anonymous. Daily Maverick also established that a family of three, a mother, father and their baby were among the fatalities.

Residents had been paying between R400 and R600 for a wooden shack in the building. Paying more would secure residents an electricity supply.

Tenants whose shacks are made of sheet metal pay R600 for an unconnected shack and R800 for a connected one.

Despite Johannesburg’s Emergency Services stating on Wednesday that staying in the building was risky, some residents were already rebuilding their shacks. This despite plans by the city to evacuate residents and find them alternative accommodation.

The residents were to be moved into tents near the burnt building on Thursday afternoon. The tents will be split into tents for men and tents for women.

Neo Goba, deputy communications director in the City said the City’s immediate task was to provide the victims temporary residence and demolish the building. “I cannot say how long the people will remain in the tents,” said Goba.

Daily Maverick has previously reported on the plight of Cape York fire victims. They were also victims of a fire in one of the decaying buildings in the Johannesburg CBD. For several years the victims have been staying in tents at the Wembley stadium in Turffontein.

Many dilapidated buildings in the Johannesburg CBD have become shelter for the homeless and a hotbed for crime. Former Johannesburg Mayor Herman Mashaba had started a process of auditing these buildings and refurbishing them for rental purposes. This process has stalled since he stepped down as mayor. DM