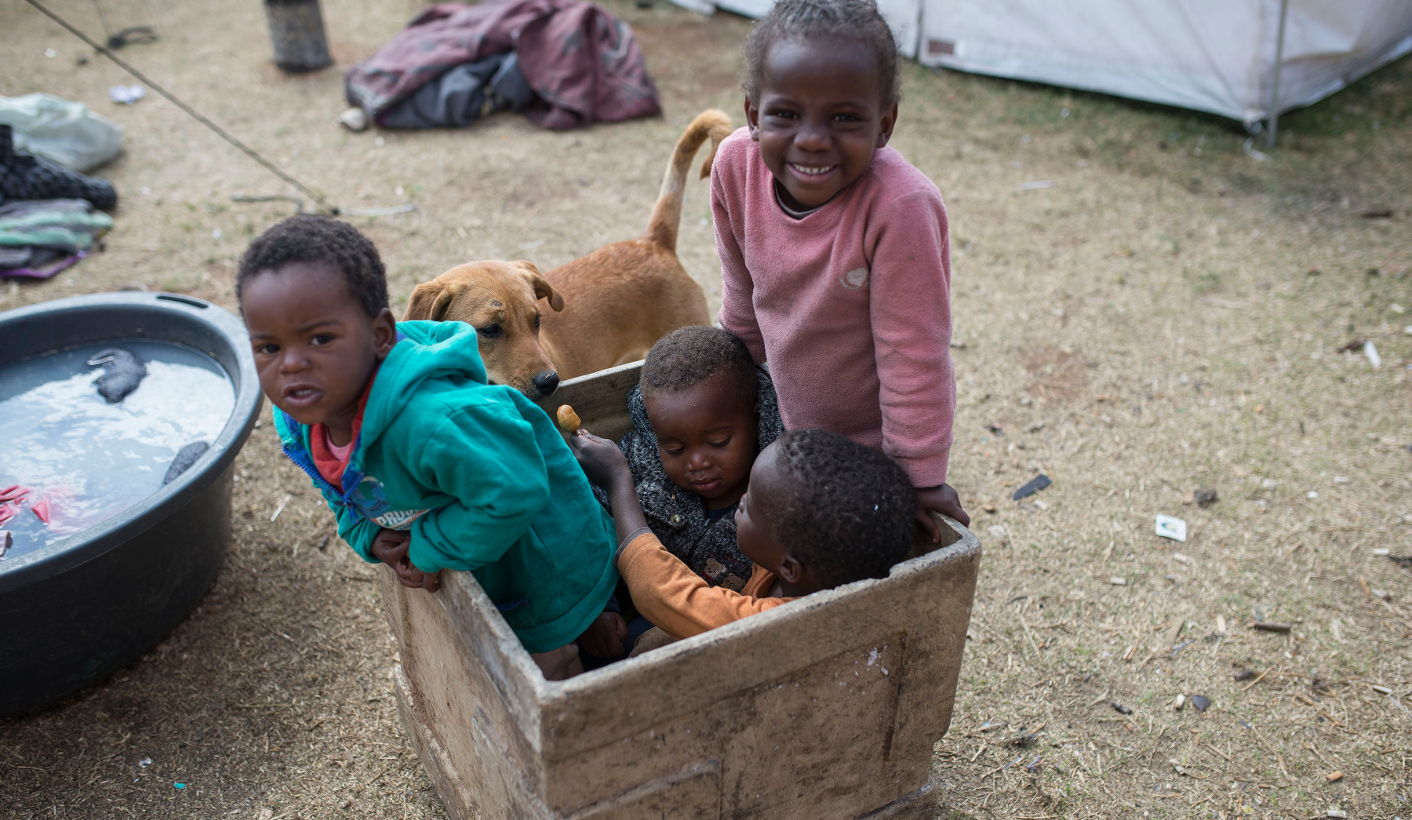 Sibongile Buthelezi and her nine children lived on the street f0r two days after the fire at the Cape York Building on 5 July. Sometimes she thinks it may have been better than where she finds herself now.

Buthelezi’s family are among 180 people who were moved to the Wembley Stadium following the blaze at the abandoned building on Nugget Street in Johannesburg.

She had first worked as a cleaner and later as a security guard at the Cape York building when it was still in good condition and housing the Bank of Mozambique. Then, when the building’s owners abandoned it, she turned it into her home for more than a decade.

Now home is a thick white plastic tent pitched on a dusty field at Wembley Stadium. It is here that the City of Joburg moved residents of the Cape York building following the fire and to comply with a Constitutional Court order to provide residents evicted from buildings in the city with alternative accommodation.

There’s no running water or electricity. Most of the residents’ belongings – clothes, blankets, documents – were destroyed in the fire. To cook, residents build fires and use cans or battered pots and pans salvaged during the mayhem of that fateful night eight weeks ago. Sometimes, though, there’s no food to cook. The last time any food was provided to them was on the day they arrived, the residents say. That lasted them two weeks and since then they have had to haggle and barter between each other.

Photo: A child with a disability is seen inside a tent at the Wembley camp near Turffontein. The child cannot walk and is confined to the tent. The child’s mother managed to escape, with her children, the fire that ravaged the Cape York building in the Joburg CBD. Photo: IHSAAN HAFFEJEE

“My children are starving. They are filthy because I cannot afford soap to wash their clothes or even bathe them, and this will expose them to illness. The tent was blown down by the wind recently, which further exposed the children to even more cold and illness. It breaks my heart when I look at my disabled child,” Buthelezi said.

So dire is the situation that many go to bed hungry every day.

Ally Mirayi left Tanzania a year ago because he could no longer bear to watch his mom – who sold firewood to support the family – struggle. He believed that with enough tenacity and energy he would be able to make it on the bustling streets of Joburg. But after a year and without a work permit, Mirayi feels hopeless.

“I don’t know what to do now because I am stuck in this tent with absolutely no hope,” 18-year-old Mirayi said.

Metres away from Mirayi’s tent, more than half a dozen young men all from Tanzania gathered around a fire to share a 500ml glass of tea and one fat cake. Most days this is their only meal, given to them for free by a fellow countryman, 45-year-old Mama Abou, who sells fat cakes and Tanzanian-styled tortilla in the camp.

Photo: A youth from Tanzania takes a sip of tea from a plastic container as part of his breakfast ritual. A group of young men all took turns in taking sips of the tea and sharing whatever other little food they managed to organise for that morning. Obtaining food has become an issue as the camp is isolated and away from money-making opportunities in the city. Photo: IHSAAN HAFFEJEE

No one is allowed to sell food at the camp, but Abou resumed her business because she could not bear to see her people starve while she could provide them with something to eat, even when they can’t pay. Business is slow as money is scarce.

“I can’t find work anywhere else because my passport was burnt in the fire,” said Abou.

Photo: Mama Abou tries to make a living selling fat cakes at the Wembley Stadium camp. Business is hard as the only customers are fellow camp residents. The camp is isolated and there is no passing traffic. Photo: IHSAAN HAFFEJEE

She is not alone. Most of the residents lost their identity documents in the blaze and while Home Affairs personnel arrived at the camp shortly after their arrival to capture their details, they are yet to return.

“I have never experienced such hardship. Unsafe and unhygienic as it was, the York City building was far better than here. This place is hell,” Ridhiwani Khalfa, 21, said.

Photo: A resident pours a little cooking oil into a pot to cook food to share with his friends at the Wembley camp. Photo: IHSAAN HAFFEJEE

But even without the fire forcing them out, the residents’ days of living in the dirty, abandoned building were numbered.

Joburg city mayor Herman Mashaba has declared war on all abandoned and hijacked buildings in the city and has openly expressed his wish to clean up the city by refurbishing the buildings into “affordable” accommodation.

“It must be stated that the City has been working tirelessly to address housing backlogs including providing emergency temporary accommodation to those left homeless and destitute on the streets as was the case when Cape York building caught fire,” mayoral spokesperson Luyanda Mfeka said.

Mfeka said the city had assisted the residents by providing emergency temporary accommodation and its social department had supplied blankets, meals and water.

Despite promises to comment, Thabo Mokgola, Home Affairs spokesperson, failed to do so before publishing.

Mashaba is on record as saying that his focus in providing housing would be poor South Africans. “I am saying my responsibility is to the people of this country. If ever anybody wants me to build houses for foreign nationals, I will gladly do it, but they must give us money.”

According to the city’s records, 120 of the former residents of the Cape York building are foreign nationals, mostly Tanzanians.

Amanda Booi’s boyfriend Simon Osama died in the fire. His body was repatriated to Tanzania thanks to donations from countrymen.

Amanda Booi’s boyfriend, Simon Osama, died in the fire that gutted the Cape York building in the Joburg CBD. Six others died as well. The building was declared a crime scene and closed off. Photo: IHSAAN HAFFEJEE

“I just need help to return home to Cape Town. I have no reason to stay here any more because the person who was taking care of me died in the fire,” Booi said, adding that this kind of life was more than she could bear.

“It’s so cold, even the blankets are so cold because they are usually iced from the cold. I just want to go to my mother in Cape Town,” she told Daily Maverick. DM

Photo: A young child offers her lollipop to a stray dog as children living in the Wembley camp use a plastic bin to play in. Some parents opted to send their kids to the houses of relatives as the conditions at the camp are very bad, especially for children. Photo: IHSAAN HAFFEJEE