Activists stand together to feed the nation 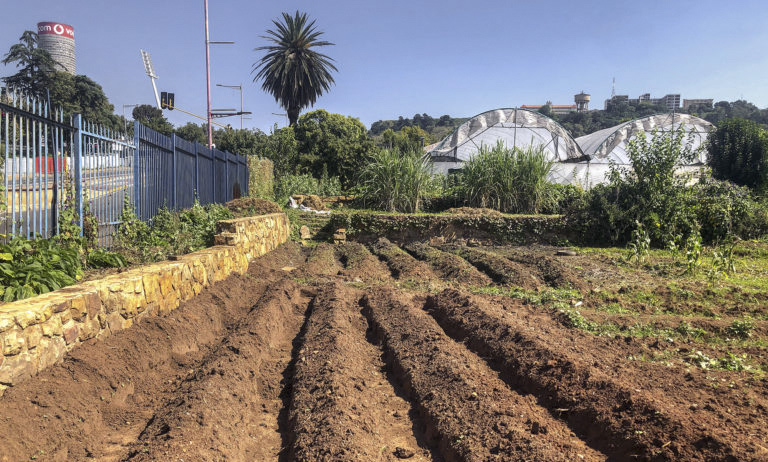 In light of ever-increasing food prices, particularly for fresh vegetables, ordinary South Africans are rallying together to find ways to ensure their security and their survival.

A monthly food basket for a household of four costs R4,128.23, according to the Household Affordability Index, which represents an increase in prices since the onset of Covid-19 by 7.1%. By comparison, the Social Relief of Distress Grant is a miserly R350.

Consequently, food gardens have become more important than ever.

Ma Refiloe — ‘Farming is like taking care of a child’

Opposite Johannesburg Stadium, with the tower blocks of Hillbrow as its background, the Bertrams Inner City Farm has been turned into a productive oasis by a kind woman affectionately known as mam Refiloe Molefe, who is determined to feed the hungry.

Food grown at the farm has fed children, homeless people and, since the start of the Covid-19 pandemic, supplied soup kitchens set up by the Makers Valley Partnership. Molefe recently joined up with social entrepreneur Ilka Stein to sell fresh produce from the Skhaftin Bus — an initiative that takes food to people’s doorsteps.

“We want people to heal themselves from the food they eat,” says Molefe.

The Bertrams Inner City Farm is at 46 Bertrams Road, Johannesburg. It is open for volunteers and organic food buyers. Molefe can be contacted on 071 781 9194.

The Makers Valley food garden has gone beyond ensuring food for the poor. It has pioneered sustainable community systems for access to food by encouraging people to grow their own.

It created the farming venture to support farmers, gardeners and others who are interested in growing their own food within the Makers Valley community. The aim is to create a sense of food security and to make use of the pavements and open spaces in the neighbourhood that remain neglected.

Siyabonga Ndlangamandla says the Makers Valley farm means more than just providing food, it is also about communicating the importance of understanding and being part of the food we eat.

Alexandra women working in the Lenin communal garden are plugging the hunger, nutritional and gender gaps. But above all, they are raising awareness of small-scale farmers, urban agriculture and the food security programme in Joburg. The predominantly women-run project is an example of Johannesburg’s urban agriculture and food security programme, the ultimate goal of which is to enable beneficiaries to become self-sustainable, emerging and commercial farmers.

The land belongs to the City of Johannesburg but is managed by 13 individuals and cooperatives with different visions. Better-performing cooperatives are identified from a pool of communal gardeners and allocated 1ha or more through the Food Empowerment Zone/AGRI parks. These are large city-owned farms, ranging from 5ha to 500ha. They include Eikenhoff Farm, south of Johannesburg (270ha) and Northern Farm (58ha) near Diepsloot.

BaNkuna has been tending his pavement patch since 2019, with neighbours and passersby giving only compliments to his endeavour. He says he established the veggie patch to meet some of his family’s food needs and save a bit of money, as vegetables are expensive. He also hoped to help his wife — a social worker who he says deals with many societal problems, including hunger — to provide food for some of her clients.

According to BaNkuna, his cabbage banditry has struck a chord with many people. Some are calling for mass vegetable planting in solidarity.

These are just a few examples of how South Africans are coming together to ensure their food security by cultivating fresh, healthy, nutritious and sustainable sources of food for themselves and their communities. DM/MC