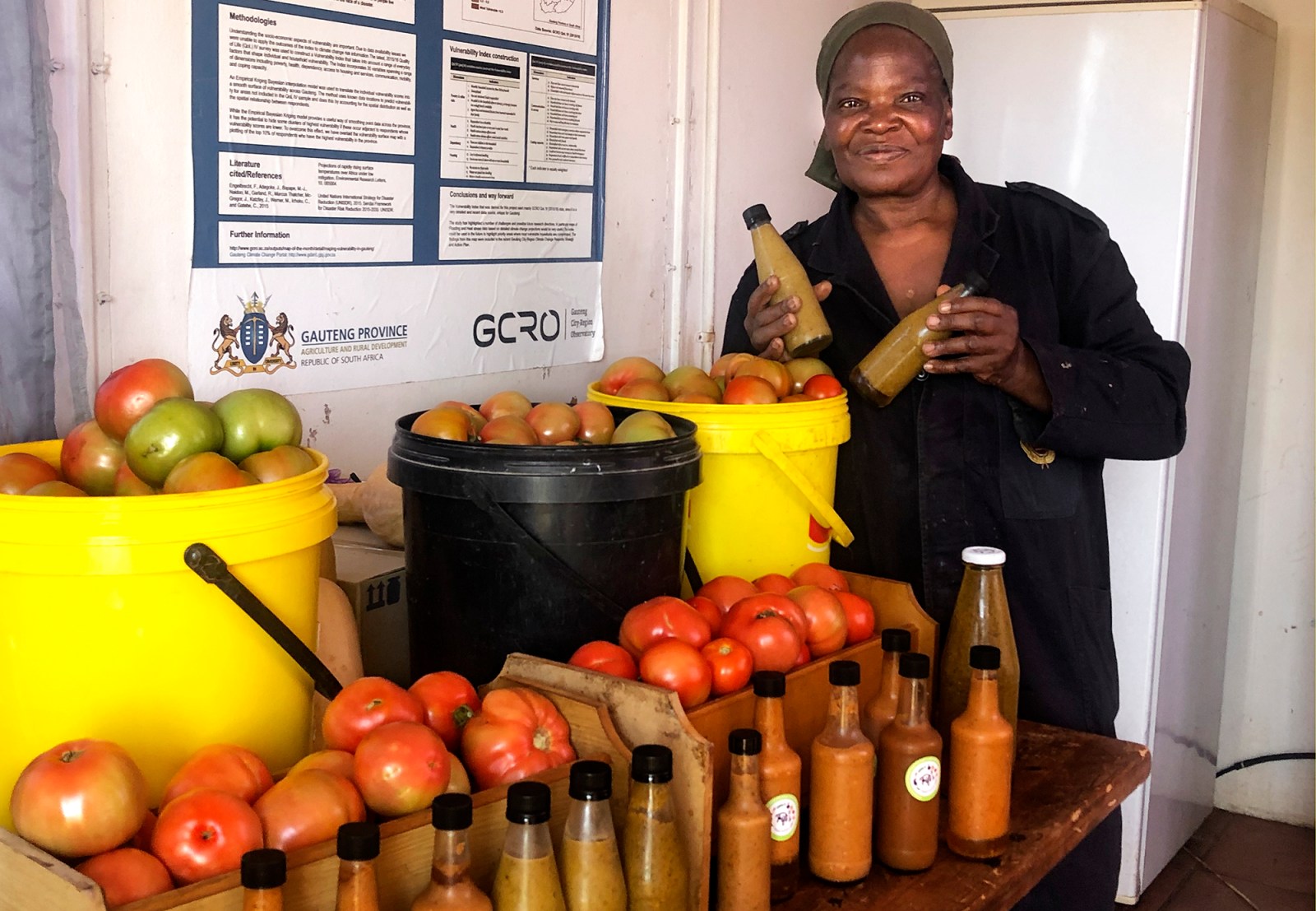 Opposite the Johannesburg stadium, with the tower blocks of Hillbrow as its background, the Bertrams Inner City Farm has been turned into a productive oasis by a kind woman, determined to feed the hungry.

Once upon a time, a middle-aged nurse living in the Johannesburg inner city looked out on the streets around her home and saw that many of the children were not going to school. She remembered sadly how when she was growing up she rarely saw her own mother and father, and so she decided that she would use her daughter’s garage to gather the children together and create a place of safety and love.

The kind woman is called Refiloe Molefe and this is her story.

Before long there were more than 50 children under her care. She called them the Precious Lilies.

But the children didn’t only need care. Molefe soon discovered that they were also hungry, so she made a plan to get donations of bread. But it soon became clear that donated bread was not going to be enough either. She needed something more sustainable, something that could provide a constant supply of food that would meet the children’s nutritional needs. After all, it is during our childhood that nutritious food is most essential to shape our bodies and brains.

Molefe went to the City of Johannesburg and the Gauteng Department of Agricultural Development to see if they could help. They told her about an inner city farm that they had started in 2006 on an old bowling green so that “no one should go to bed hungry”. But they warned her that others had tried and failed to make it work: “I would fail like the others, they told me.” But she was determined to try.

Once she had started work on the farm, local crèches took over looking after the children and she concentrated her efforts on the farm. She won several competitions and used the prize money to buy tools and put in taps. She also started to engage the assistance of local youth with the hard labour of watering, digging and tending to the farm.

Molefe says she found she had a sixth sense for farming. “Farming is like taking care of a child”, she says – and she knew all about taking care of children. But, she admits, she knew little about its theory or science, so she approached the Agricultural Sector Education and Training Authority and enrolled in classes on plant production.

“Being in class opened my eyes,” she said. “It taught me to test the pH level of the soils and about hard-to-pronounce terms like photosynthesis. I had called it ‘natural farming’, but then I learnt that what I was doing was called organic farming.”

As an example, she mentions how, instead of using chemicals, they plant marigolds to keep away flies and other insects. “Over time I saw that lots of products were going to waste, so I decided to learn about agro-processing: how to make sauces, juices and healthy bread.”

She approached the University of Johannesburg “to ask for young people to work at the farm as part of community engagement”. They agreed and she found that working with the soil became a form of therapy for young people and also improved their academic performance and results.

Today, the farm is assisted by a youth cooperative that she set up as a way to transfer skills and which helps her with things such as book-keeping. Proudly, she shows me her Fountain of Youth business card with her name and title: manager and founder.

Before Covid-19 closed the universities, she says that up to 75 students would come to work on the farm from time to time. Now she relies on children from the community.

On the day I visit, several are working between the rows of vegetables. I ask her if middle-class white people like me could come and help. Her reply: “I don’t have colour. In the garden here everyone is green.”

Fourteen years after Refiloe Molefe started farming, she is proud of her achievements. Children from local primary schools visit the farm “to learn that food doesn’t come from Pick n Pay, but from the earth”.

The food that is grown there has fed children, homeless people and, since the start of the Covid-19 pandemic, has supplied the soup kitchens set up by the Makers Valley Partnership. She has recently joined up with social entrepreneur Ilka Stein to sell fresh produce from the Skhaftin bus, an initiative that takes food to people’s doorsteps.

She talks of wanting to find a bigger farm, “where I can teach orphans to feed themselves. We want people to heal themselves from the food they eat.”

Today, the farm is an unexpected oasis in the concrete desert of the Johannesburg inner city. The farm covers little more than a hectare. It squeezes between the Johannesburg stadium and the grounds of the historic Johannesburg cricket club. Its backdrop is the Ponte building and the tower blocks of Hillbrow. Once inside, its rows of mealies, sweet potatoes, and even a couple of beehives comes as a bit of a shock to the senses.

But it’s real – and so is Molefe’s quest for healthy, affordable, accessible food. DM168

The Bertrams Inner City Farm is at 46 Bertrams Road, Johannesburg. It is open for volunteers and organic food buyers. Molefe can be contacted on 071 781 9194.