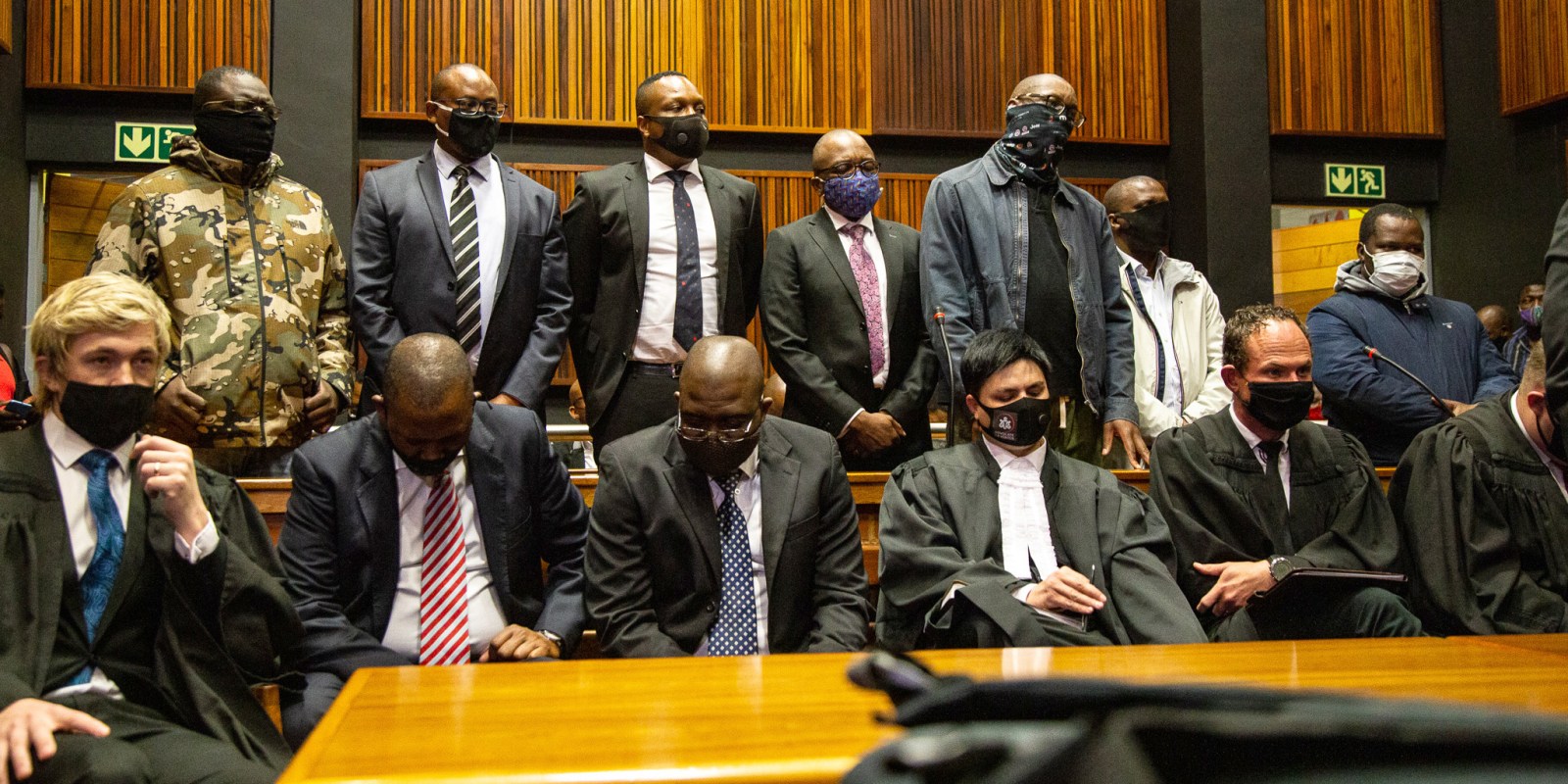 The VBS pre-trial where 14 people are accused of racketeering, money laundering, theft and fraud, has been postponed to January.

On Tuesday, the VBS Mutual Bank pre-trial proceedings resumed at the High Court in Pretoria, but were postponed to January 2022 because the defence’s legal representatives were not ready.

The 14 suspects have been charged with 188 counts of theft, fraud, money laundering, corruption, racketeering and contraventions of provisions in the Prevention of Organised Crime Act and the Prevention and Combating of Corrupt Activities Act.

These alleged crimes relate to the looting of VBS Mutual Bank between 2015 and March 2018.

The 14 accused include chartered accountants, lawyers, politicians and businessmen. One of the accused is ANC Limpopo Treasurer Danny Msiza, who will be applying to have his trial separated from his co-accused.

In July 2020, amaBhungane wrote that: “Msiza’s fingerprints are all over the VBS scandal. As one of the ANC’s top six office-bearers in Limpopo, his role was allegedly to lean on municipal officials in order to make them channel their budgets towards the bank.”

Two months ago, the pretrial proceedings were postponed to Tuesday, 12 October because several of the accused had appointed new legal representatives, who had not yet received the 62,000-page docket.

Speaking to Newzroom Afrika, Mthunzi Mhaga, the National Prosecuting Authority (NPA) spokesperson, said, “The State is ready to proceed with the matter, it’s only the defence [team] which unfortunately is not ready.”

A trial date is expected to be set in January, but Msiza’s application for a separate trial “has an unfortunate consequence of delaying a trial,” Mhaga told Newzroom Afrika.

The State alleges that the suspects looted nearly R2.3-billion from VBS’s coffers and doctored the bank’s 2017 financial statements to cover up the fact that it was insolvent.

In 2018, advocate Terry Motau released his report, The Great Bank Heist, into the fraud and corruption at VBS.

VBS was placed under curatorship after being declared insolvent and bankrupt in 2018. It was formed as the Venda Building Society in 1982 by the Venda homeland administration.

In 1992, VBS was transformed into a mutual bank, catering mostly for civil servants from the Venda homeland, rural cooperatives, burial societies and small businesspeople.

The accused include Solly Maposa, who is the former VBS managing director for retail. He exercised control over some of the banking systems. The indictment alleges Maposa received a cumulative R38.5-million in benefits, loans and cash.

Another accused is the former COO of VBS and CEO of Vele Investments Robert Madzonga, who is an admitted attorney with more than 23 years’ experience in corporate and financial business. The National Prosecuting Authority (NPA) alleges that about R34.5-million in cash and loans were funnelled to Madzonga through his fronts.

In 2020, Philip Truter, who was the chief financial officer at VBS, entered into a plea bargain with the NPA. Truter was sentenced to seven years’ imprisonment.

​Another accused, Charlotte Ngobeni, was the manager of Collins Chabane Local Municipality in Limpopo. She appeared separately on various charges and was released on bail of R50,000.

The other accused persons

According to Motau, Kabelo Matsepe received R35.4-million, which Matsepe claimed were fees for bringing together the bank and municipalities.

The NPA claims that Takunda Edgar Mucheke was paid R7-million in VBS loot, of which he sent R3.38-million to a company under the control of Tshianeo Madadzhe.

A Scorpio investigation suggests Phophi Mukhodobwane, VBS treasurer, used his brother as a front. The NPA now wants answers about at least R17.1-million in VBS loot Mukhodobwane allegedly benefited from.

KPMG auditor Sipho Malaba is accused of using his wife as a front to hide the receipt of about R31-million in VBS loot.

The chairman of the VBS audit committee, Phalaphala Ramikosi, is alleged to have also used a front to hide his receipt of R750,000 for his role in the VBS looting.

Ernest Nesane and Paul Magula were executives at the Public Investment Corporation sitting on the board of VBS. The NPA wants answers about R7.45-million Nesane received and about R7-million Magula received for their role in allegedly covering up the fraud.

The executive director and CEO of VBS, Andile Ramavhunga, had control over several front companies, the NPA alleges, and has to answer for a total of R23.49-million.

Scorpio investigative journalist Pauli van Wyk has written extensively on how the money looted from VBS was used to fund the lavish lifestyles of the EFF’s president, Julius Malema, and his deputy, Floyd Shivambu, through a company owned by Brian Shivambu, Floyd’s brother.

In March 2021, Brian Shivambu signed a secret contract admitting to having received R4.55-million in VBS loot for no legitimate reason. He promised to pay back the money. DM