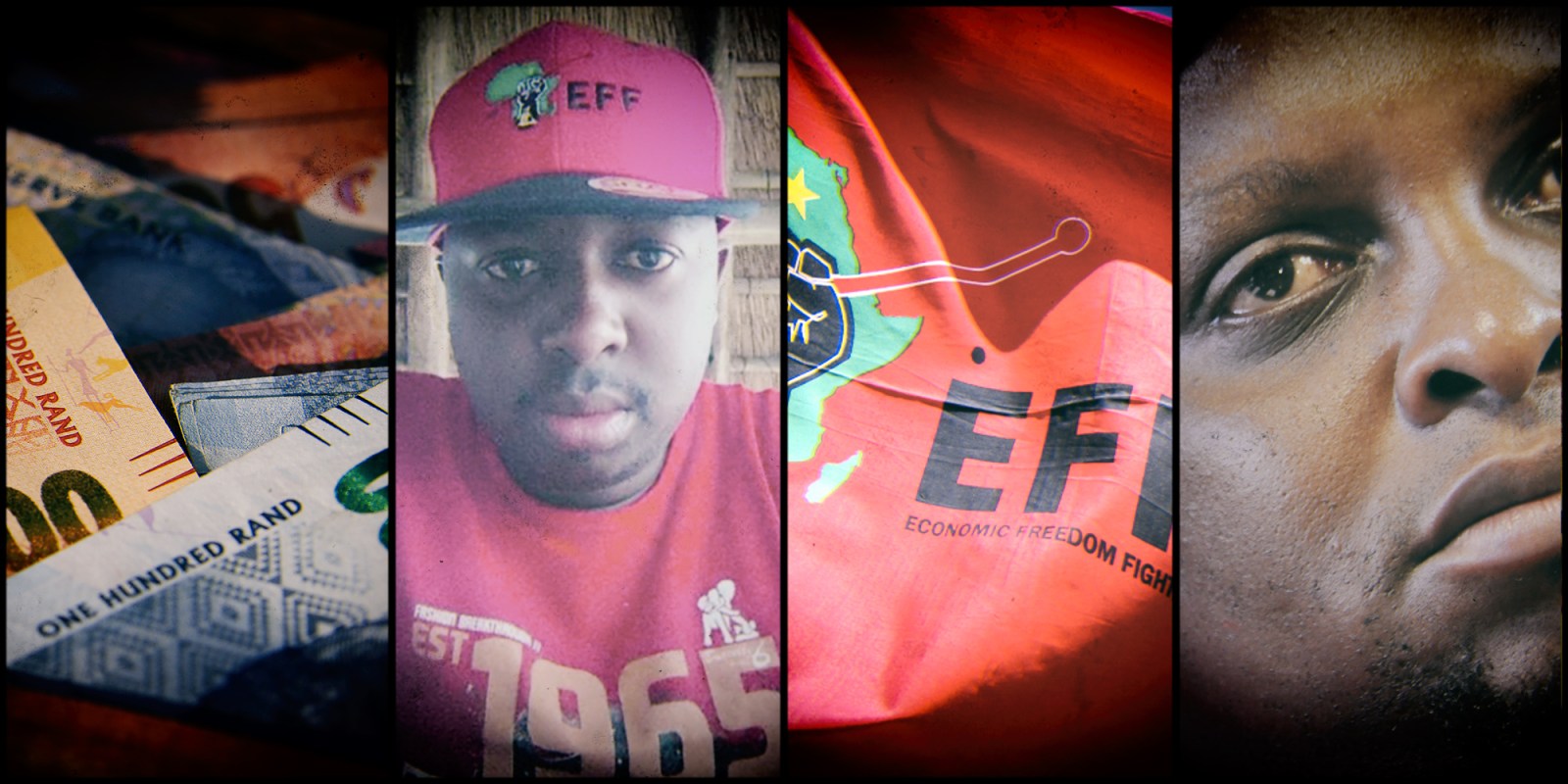 Brian Shivambu signed a secret contract admitting to having received R4.55m in VBS loot for no kosher reason. He promised to pay back the money. The contract itself and its cloak of secrecy seem to be revealing and damning.

Brian Shivambu’s attorneys insisted on a secrecy clause before their client signed an “acknowledgement of debt” for R4.55-million in favour of Vele Investments, the majority shareholder in VBS Mutual Bank, during Vele’s insolvency inquiry.

Vele and VBS, along with other related companies, created a single criminal enterprise under the stewardship of bank chairman Tshifhiwa Matodzi with the goal of stealing from the bank’s depositors and laundering proceeds to participants in the scam, which amounted to about R2.7-billion.

In the acknowledgement of debt contract, signed on 23 March 2020, Shivambu admits that “there is no underlying basis for the payment of R4,550,000 and accordingly the amount of R4,550,000 must be repaid to Vele Investments”.

With this, Shivambu admits to having received millions of rands for doing nothing.

His acknowledgement of debt belies years of denial and attempts to legitimise the money flowing from three VBS-linked companies, of which Vele was one, through his company Sgameka Projects right into the front companies and pockets of his brother Floyd Shivambu and Julius Malema. A part of the VBS-loot also funded the EFF.

The acknowledgement of debt between Vele and Shivambu’s Sgameka Projects slots into Vele’s liquidation and insolvency inquiry in which curator Richard Pollock is attempting to recoup stolen money owed to Vele and, by implication, the VBS Mutual Bank depositors.

The amount of R4.55-million Vele claimed back is a slice of the R16.1-million which VBS investigators, advocate Terry Motau and Werksmans, found Shivambu had received “gratuitously”.

Shivambu confirms in the same contract:

“Sgameka hereby agrees and acknowledges that the amount, nature, cause, calculation and enforceability of the indebtedness is not disputed.” 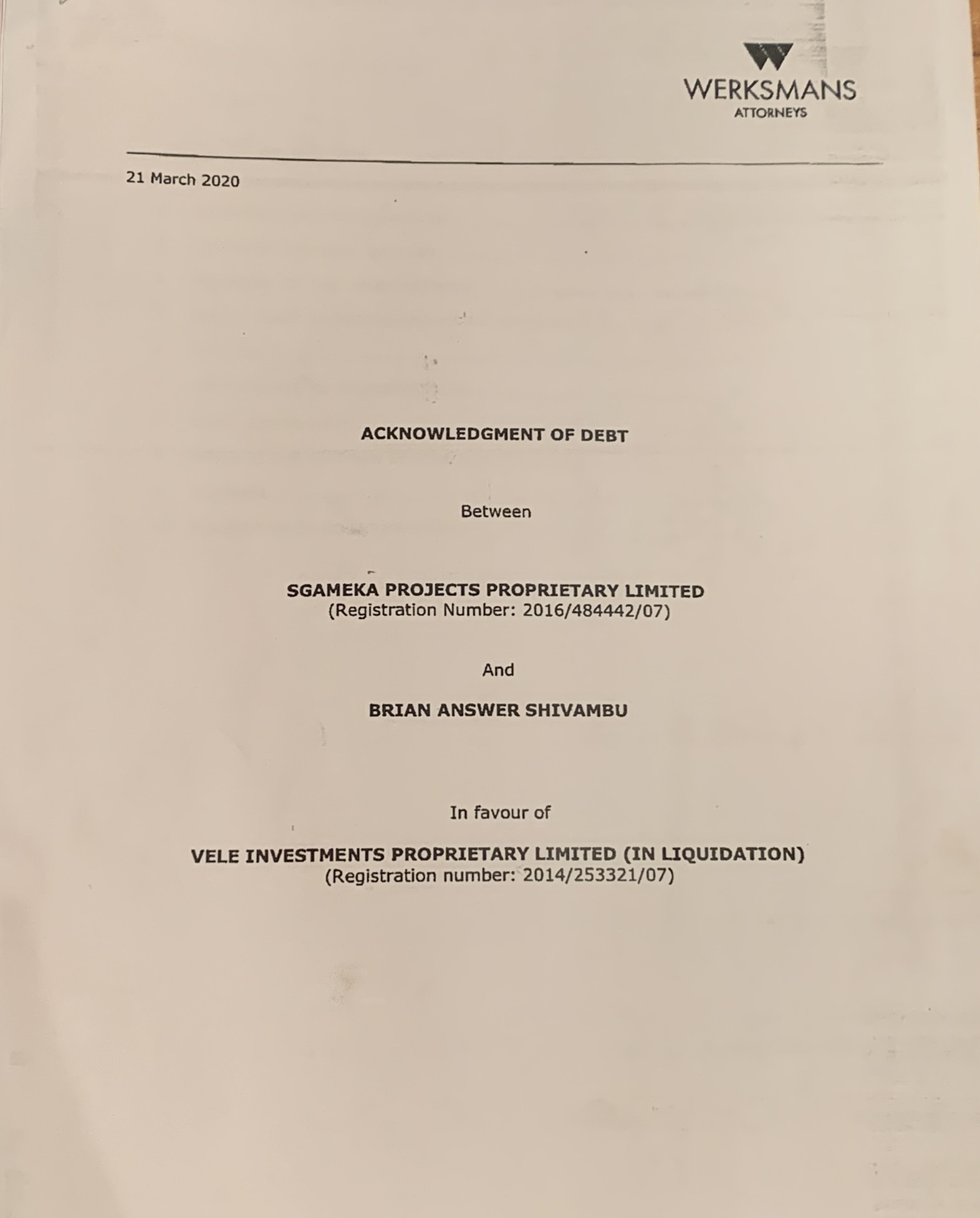 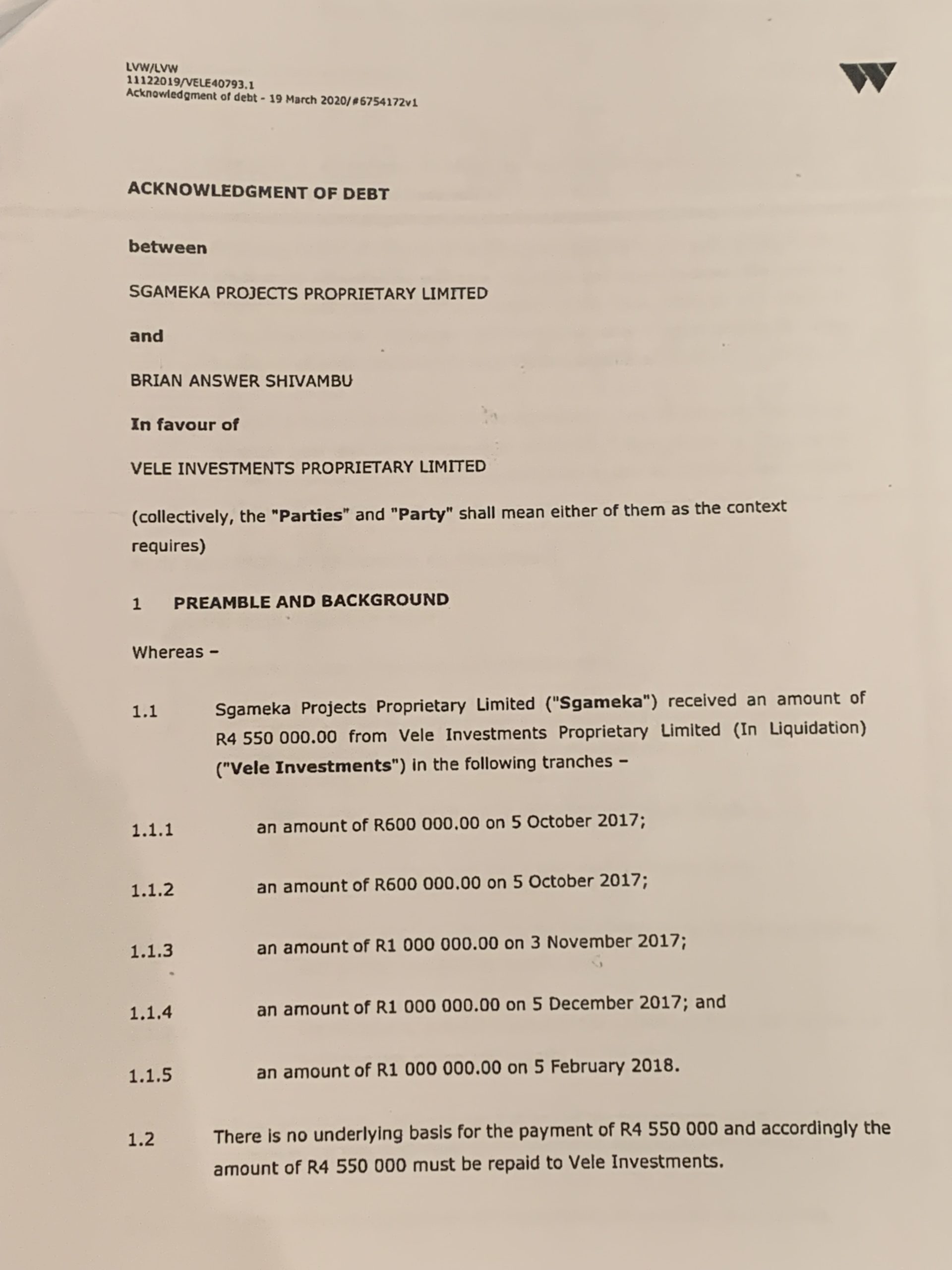 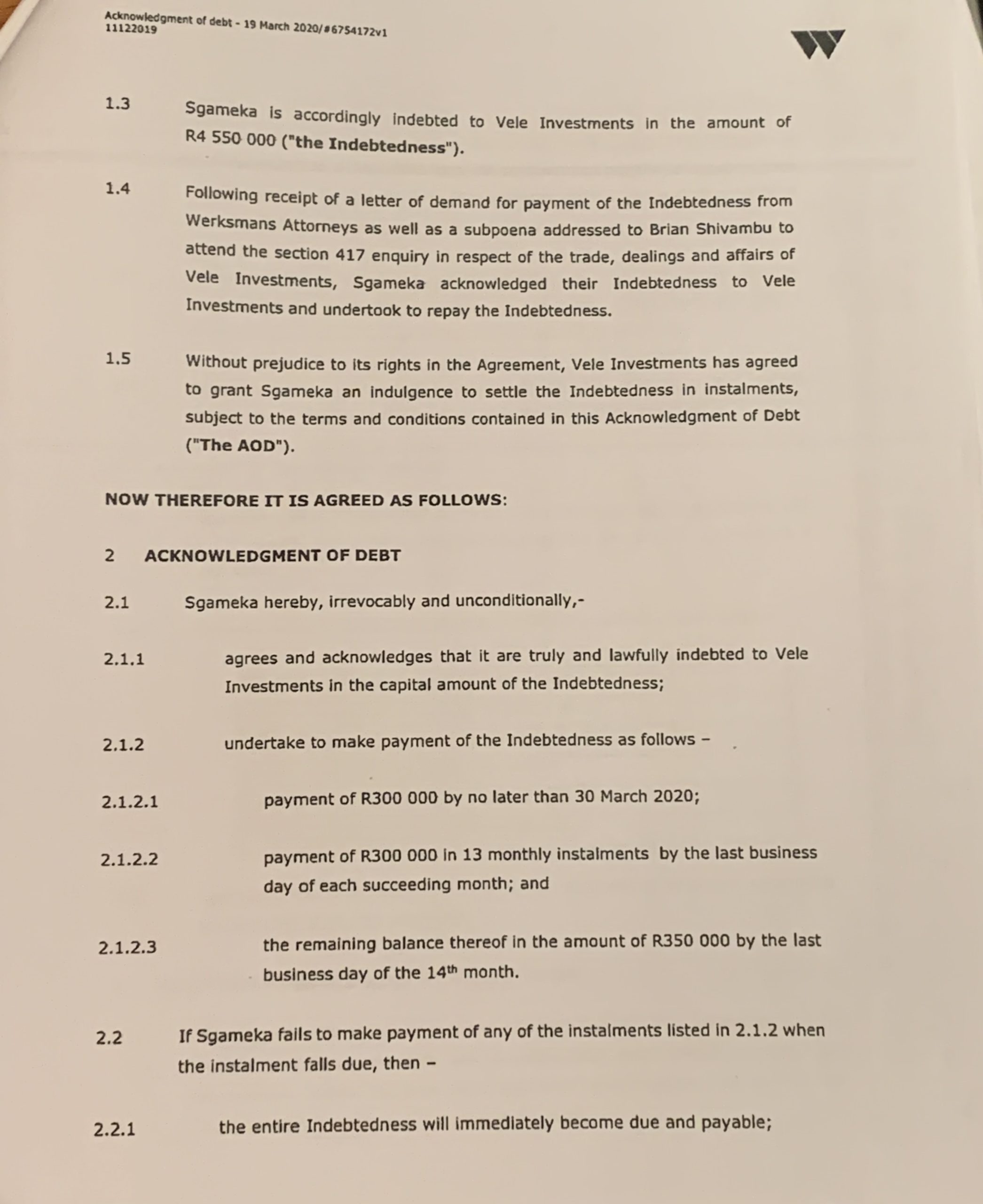 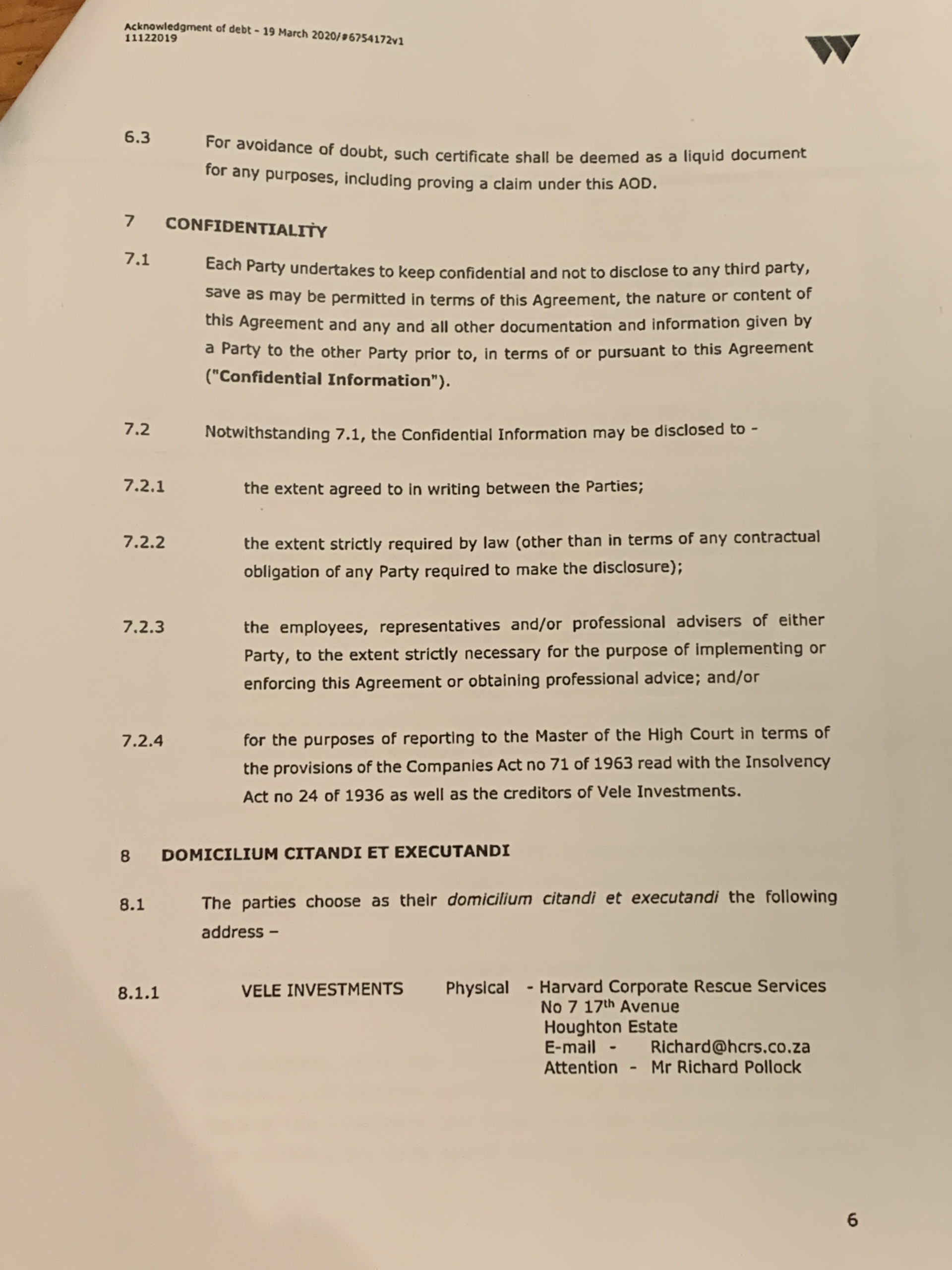 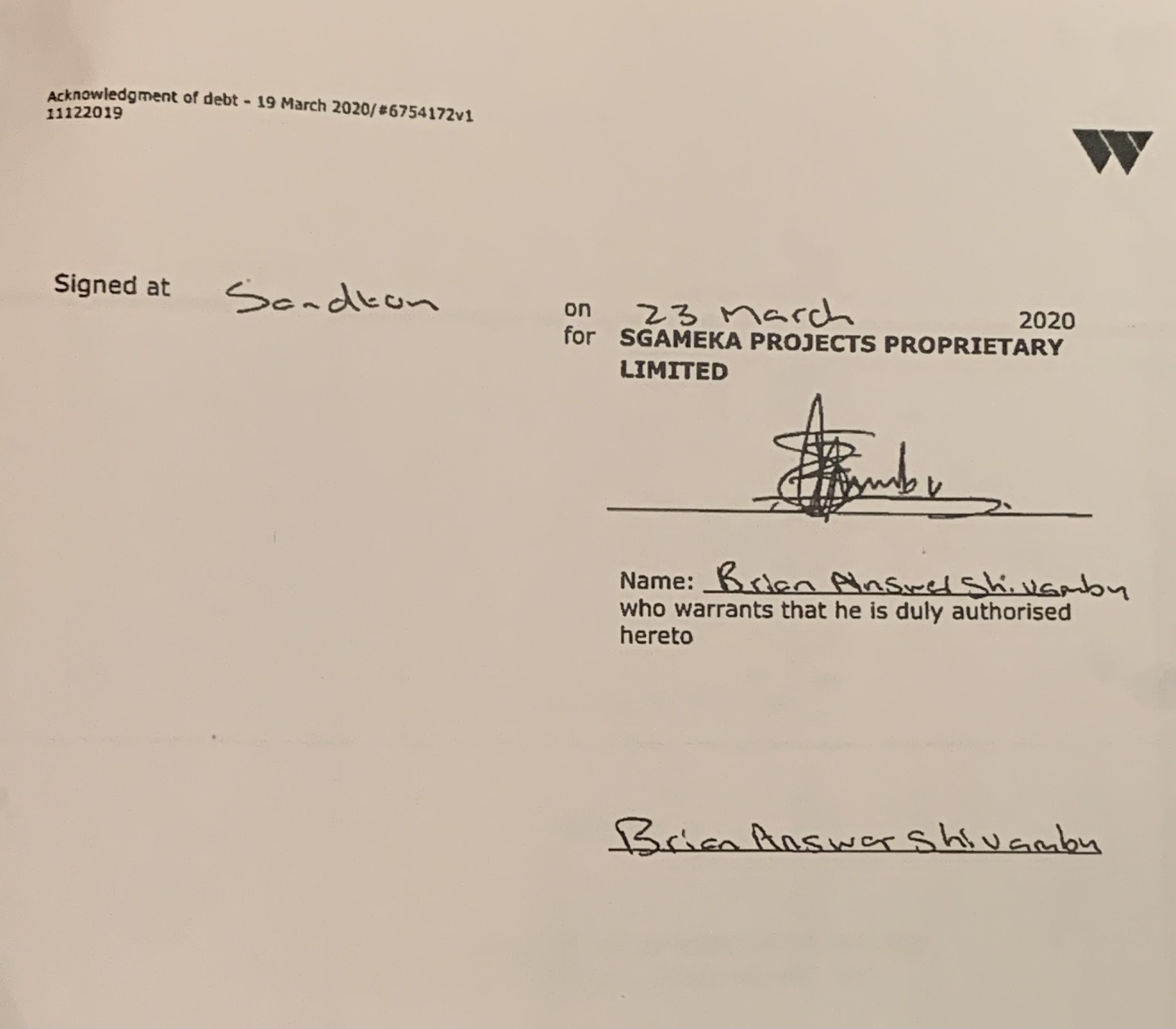 Shivambu’s admission of no work done in exchange for R4.55-million in VBS loot goes a long way in supporting the findings in Scorpio’s two-year investigation, in that:

a) Shivambu was the veneer of legitimacy for his brother Floyd, the Economic Freedom Fighters (EFF) and its leader, Julius Malema. He utilised little of the money for his own needs;

b) Sgameka funnelled millions of rands and benefits which Floyd, Malema and the EFF spent on property, a Soweto restaurant, their children and family, luxury cars, luxury clothing, holidays, groceries and the EFF’s fourth birthday bash in Umlazi; and

c) Bank chairman Matodzi, who stands accused of having orchestrated the fraud at VBS, utilised the EFF’s political power in exchange for money. Matodzi described the Sgameka Projects bank account as “extremely strategic” and the money dumped into it as “lobbying fees”.

Scorpio’s findings are based on reams of bank statements, documents, WhatsApp messages and eyewitness accounts. Malema, the brothers Shivambu and the EFF have threatened to launch legal challenges, but didn’t walk the talk.

(The EFF leaders have also, at the very least, encouraged a massive social media disinformation campaign, replete with threats against the Scorpio reporter, and have also “banned” Daily Maverick, Scorpio and amaBhungane from reporting on their public events. They have not, however, gone the legal route, for obvious reasons. — Editor)

The secrecy clause under the heading “confidentiality” in the contract states that the “nature or content of this agreement” will not be disclosed.

The matter was, however, recently filed with the Master of the High Court in accordance with legal proceedings in the winding up of Vele Investments.

Shivambu’s lawyer Victor Nkhwashu acknowledged receipt of Scorpio’s query about the contract on 10 May, but did not answer any of our questions.

Pollock declined to comment, stating that the insolvency inquiry into Vele is governed by sections 417 and 418 of the Companies Act as it is “secret by nature and unfortunately we cannot disclose details of the evidence given nor the information obtained”. Pollock said that Shivambu’s attorneys “requested the acknowledgement be made confidential”.

He further confirmed that the R4.55-million Sgameka owed to Vele “has been fully repaid. Payments were made initially in accordance with the repayment plan and then accelerated.”

Who exactly bankrolled Shivambu is not yet known to Scorpio.

Shivambu’s secret admission was the result of some legal wrangling in which he suddenly claimed to not be able to speak English and testify in the language.

This was after Judge Brian Southwood, heading the Vele insolvency inquiry, in late 2019 subpoenaed Shivambu to testify about what he knew.

A transcript of proceedings shows that Shivambu’s perception was one of being denied the right to testify in Xitsonga, while Southwood believed Shivambu was unduly delaying proceedings in a situation where only a “simple” explanation was required.

The more important part, though, is that at the time Shivambu’s lawyer, Nkhwashu, still attempted to argue that Sgameka had been paid the R4.55-million legitimately, based on a contract and work done.

Shivambu felt so aggrieved by Southwood’s scepticism about his proficiency in English that he instructed his lawyers to initiate an application for Southwood to recuse himself, based mainly on bias. Before the matter could be aired and decided, Shivambu suddenly changed his mind, based on legal advice. On 23 March 2020, he signed the acknowledgement of debt, stating that Sgameka did indeed do nothing to earn the R4.55-million from Vele Investments and that the money would be paid back in tranches.

His lawyers then insisted on a confidentiality clause to obscure the entire matter.

The payback of R4.55-million is the second linked to VBS that Shivambu was forced to honour.

The first was a payment of R2.78-million, VBS loot that was dumped into the Shivambus’ and Malema’s SUD Restaurant in Soweto. This amount was payback for a partial loan, plus interest and legal costs.

To date, 15 people have been arrested for alleged crimes committed in the fraud that caused VBS Mutual Bank’s implosion. The bank’s CFO, Philip Truter, has pleaded guilty. Its management, auditors and attorneys as well as ANC-linked businessmen will stand trial on 188 counts of theft, fraud, money laundering, corruption, racketeering and contraventions of provisions in the Prevention of Organised Crime Act and the Prevention and Combating of Corrupt Activities Act. DM