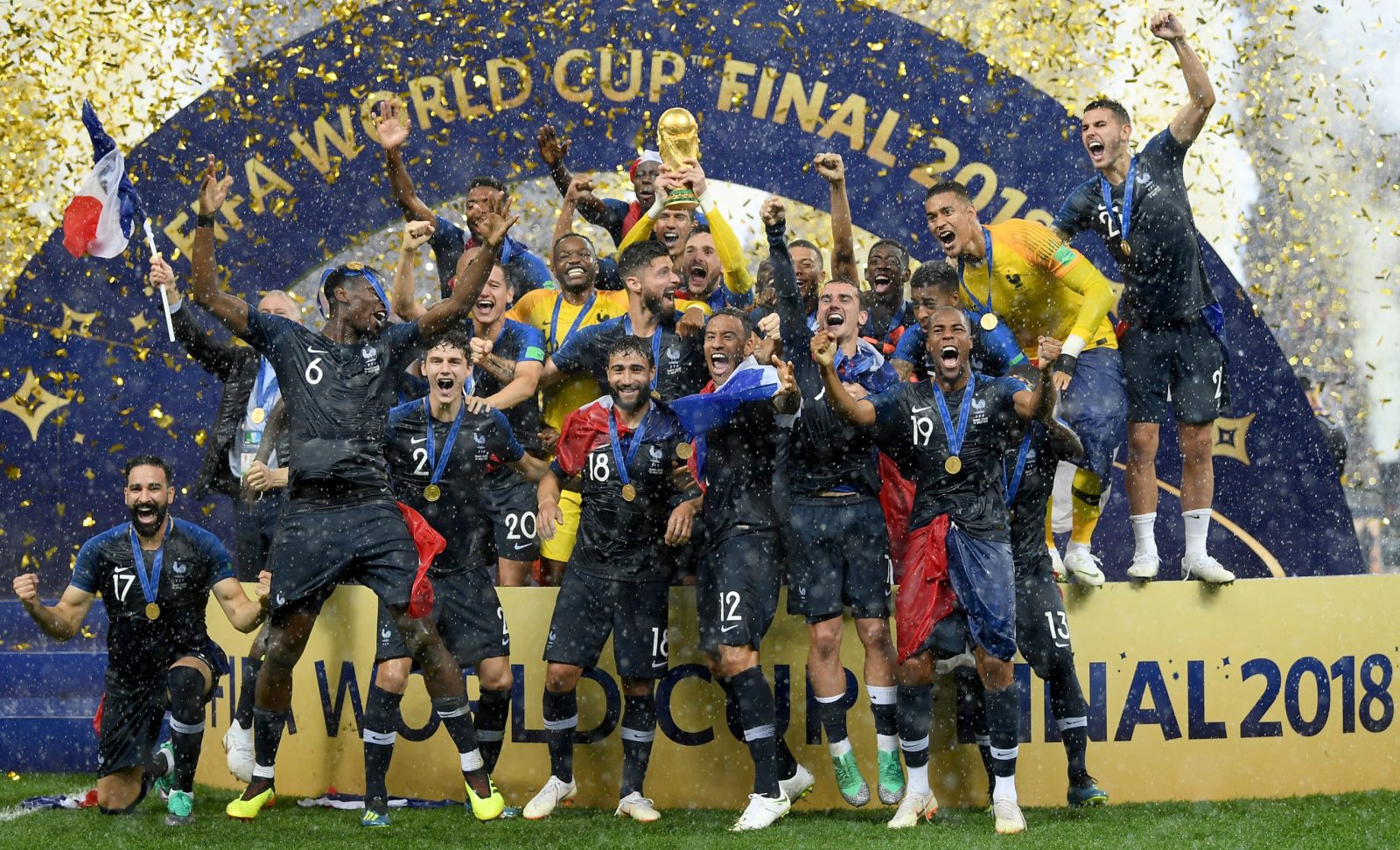 Hugo Lloris of France lifts the World Cup trophy to celebrate with his teammates after the 2018 Fifa World Cup final between France and Croatia at Luzhniki Stadium on 15 July 2018 in Moscow, Russia. (Photo: Matthias Hangst / Getty Images)

Who stands to benefit from holding football World Cups every two years, as opposed to every four? As things stand, clubs don’t seem to be on the same field as the world governing body.

What is the crux of the push to hold a football World Cup every two years instead of every four? Well, the catalyst was the football federation of Saudi Arabia, which formally submitted a request earlier this year to Fifa “requesting a feasibility study to be carried out on the impact” of playing both the men’s and women’s World Cups every two years.

Fifa President Gianni Infantino ran with the suggestion and it was tabled at a Fifa congress soon after. At that congress, 166 of Fifa’s 211 member associations voted in favour of the feasibility study currently being carried out.

Infantino has said the interests of all relevant stakeholders would be considered before a final decision was taken.

“The new Fifa is open for this type of dialogue as we strive to find the best possible solution for women’s, men’s and youth football going forward, both in terms of international match calendar and final tournaments reform,” he said during a member associations’ online summit a few weeks ago.

“We have the opportunity to shape football history, to look forward, to learn from the past and to design the future because our vision is to make football truly global.

“But we will only make changes if it benefits everyone. No one should be a loser in this. Everyone should be better off at the end of the day. Otherwise there is no reason to change anything, if the global world of football and everyone in it is not better off. We are aware of the different challenges that this brings.”

The process for men’s football is being led by Arsene Wenger and by Jill Ellis for women’s football. Wenger, the Fifa chief of global football development famed for coaching English club Arsenal to league success without defeat in the 2003/2004 season, outlined his proposals in relation to the men’s international match calendar, stressing his desire to make football better.

“It is an audacious proposal for the future of men’s football, and it follows four main principles. Namely, regrouping national team qualifying matches, reducing travel for players, creating more space for meaningful matches and final tournaments, and ensuring a mandatory rest period for players between seasons,” he said.

With clubs, especially those from Europe, known to embark on lucrative pre-season tours in Asia and the US, that four-week rest period would be an obvious sticking point between national teams and clubs.

The clubs pay their players millions annually and, as such, would be unhappy not to have some of their best players on those money-making tours because of the proposed rest period.

The proposal of a two-year international World Cup is not new. A biennial men’s World Cup was first floated by Fifa’s then president Sepp Blatter more than 20 years ago.

In his proposition, Blatter stated that continental competitions such as the European Championship, Africa Cup of Nations and Copa America would be played in odd years, in contrast with the even years of the World Cup, and would serve as qualifiers for the global showpiece.

The idea, however, never gathered momentum during  Blatter’s tenure.

There are typically about five Fifa international breaks in a year. With this latest proposal, they would be significantly reduced to about one or two, creating less need for players to travel back and forth between their clubs and international duty during designated Fifa windows.

Despite this hypothetical convenience, there is widespread opposition to the proposition, particularly from Europe. The continent is home to some of the most popular and most influential clubs in world football. As such, their voice is louder than most other Fifa members.

“Uefa and its national associations have serious reservations and grave concerns surrounding reports of Fifa’s plans,” Uefa president Aleksander Ceferin said of the suggestion. “We think that the jewel of the World Cup has value precisely because of its rarity. Holding it every two years will lead to less legitimacy and dilute the World Cup itself. We think there is a space for everything and both national teams and clubs are fully occupying that physical and commercial space.”

The World Leagues Forum, the association representing professional leagues at world level, has also said it rejects plans for a biennial World Cup.

“The World Leagues Forum will oppose any proposals to hold the football World Cup every two years and dilute the historical and traditional values of a competition that means so much to fans and players,” the organisation said in a statement.

“A biennial World Cup would negatively disrupt the football economy and undermine players’ welfare in a calendar that is already overloaded.

“As the employers of players and developers of the game at domestic level, leagues request full and transparent discussions so that the football calendar, which requires a complementary balance between club matches and national teams, can be agreed upon by all parties involved to benefit the game at all levels over the long term.

“Working together with all football stakeholders, the World Leagues Forum will ensure Fifa is not allowed to make unilateral decisions on the future of football against the interests of leagues, clubs, players and fans,” it said.

In Africa, though, and more importantly, in South Africa, the consensus is that a two-year World Cup would be beneficial for the continent in the long run – especially with the 2026 World Cup set to accommodate 48 nations as opposed to the traditional 32.

South Africa have not qualified for a Fifa World Cup since 2002, though they did play in the 2010 edition by virtue of being hosts.

South Africa is the only African nation that has hosted the football competition.

In a recent meeting, the South African Football Association’s (Safa’s) national executive committee agreed that having the World Cup would help the African continent a great deal as more tournaments would translate to more opportunities for qualification for African teams.

“As South African football, this matter was debated at length and in the final analysis the national executive of South African football agreed to endorse the World Cup biennially, for both men and women. So that is our position,” Safa president Danny Jordaan told journalists at a recent media conference.

Safa’s national executive also resolved that Fifa should be encouraged to revisit the rotation system to avoid one or two continents monopolising the hosting of Fifa World Cup events. Historically, the global spectacle has been confined to the continents of Europe and South America.

From a European and North American perspective – two continents that have some of the most advanced women’s football leagues – the staging of the World Cup every two years would be just as inconvenient as it has been touted to potentially be for the men.

Uefa, the European Clubs Association and several of Europe’s top women’s leagues have expressed their reservations in a joint statement.

Among those concerns are that biennial World Cups will interrupt the “professionalisation process and investment in domestic leagues, and therefore the ambition to create meaningful full-time employment for female players and structures that offer an elite environment. There are still very few full-time professional leagues in the world.”

But Ellis, who heads Fifa’s technical advisory group on the future of women’s football, disagrees.

In 2019, the world football governing body hosted their most successful women’s World Cup to date, with an estimated average of 1.2 billion viewers watching the tournament.

Ellis says they are hoping to build on that success, particularly for the benefit of smaller nations that depend on international football to test and improve their quality.

“We have issues in both national team football and club football that require substantial change. Our focus is on providing more balanced playing opportunities at national team level across the world, and to find better solutions in moving club football forward,” said the former United States women’s team coach.

“Therefore, included in our proposed solution would be the opportunity to change the frequency of the Fifa women’s World Cup and continental tournaments in order to create a much bigger platform for women’s football.”

With the debate set to roll on, it will be impossible for everyone’s interests to be satisfied, as the football schedule is a zero-sum game. There are only so many days in a year, and all the stakeholders want whichever schedule benefits them the most, financially or otherwise. DM168