The reality of living on the street in SA 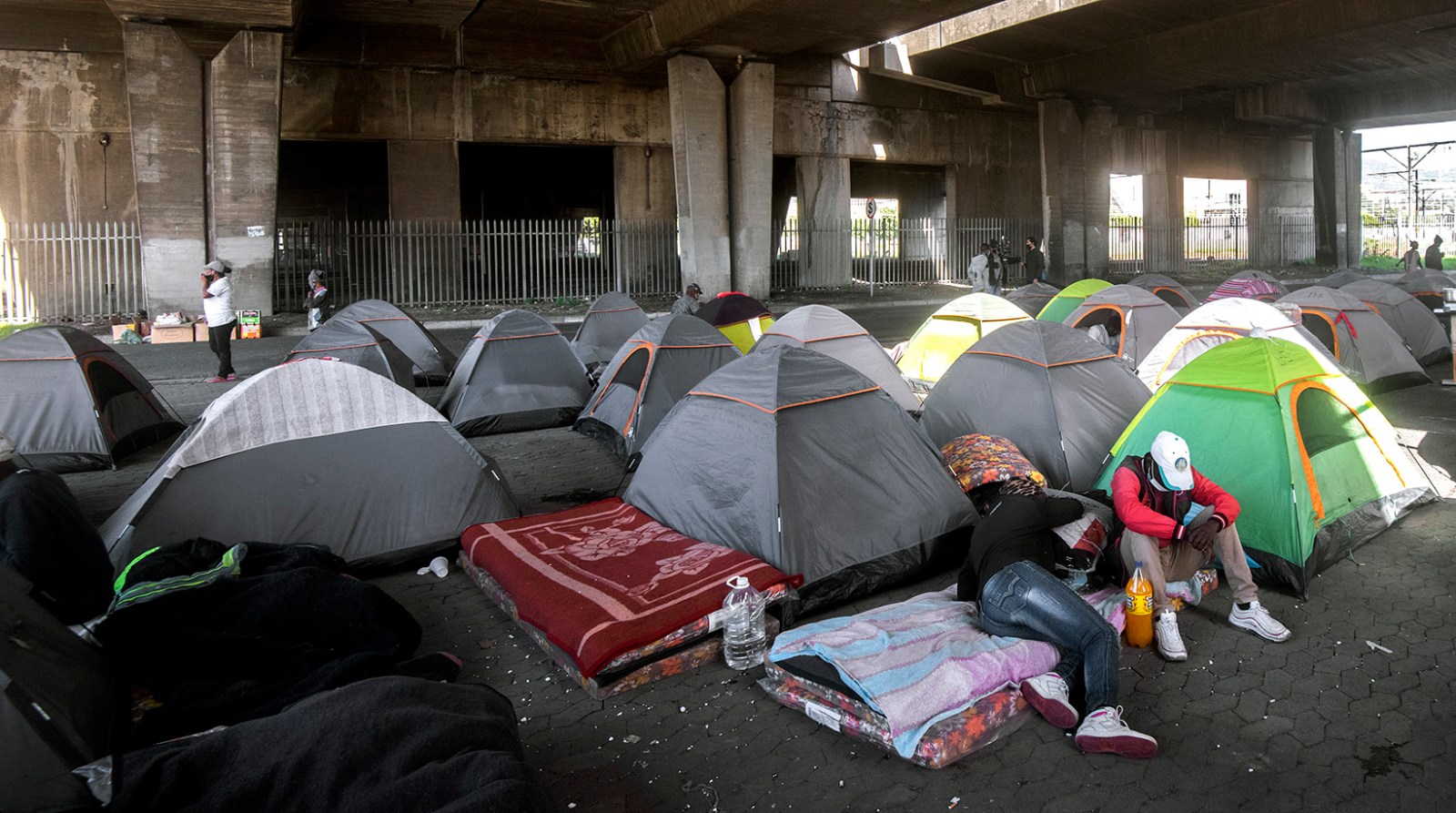 CAPE TOWN, SOUTH AFRICA - MAY 22: A general view of homeless people living under a bridge on May 22, 2020 in Cape Town, South Africa. It is reported that the City of Cape Town is shutting down its Strandfontein camp and moved the last of the homeless back to the city centre under the Culemborg bridge. (Photo: Brenton Geach/Gallo Images via Getty Images)

In the run-up to municipal elections, the National Homeless Network has compiled a Homeless Manifesto to ensure the needs of the destitute are prioritised. Prompted by the document, Maverick Citizen took to the streets to ask homeless persons what issues they want local government to address

Accurate statistics on the number of homeless people in South Africa are non-existent. But in Cape Town alone, figures from 2020 suggest the metro has upwards of 14,000 people living on the streets. Johannesburg has around 15,000.

Since the Covid-19 pandemic started, NGOs suggest the number of people living on the streets has grown exponentially due to job losses and other knock-on effects of the virus.

The needs of the homeless have been notoriously low on the agenda of national and local government. For example, Social Development Minister Lindiwe Zulu has said in Parliament that there is “no clarity at national level” regarding which department is responsible for dealing with homelessness, meaning there is no action-plan or budget allocation.

Each city has created a local set of demands under these five headings.

Struggle activist and former Vice-Chancellor of the University of South Africa (Unisa) Barney Pityana wrote in a Maverick Citizen op-ed: “It is the actions and the inaction of municipalities that has more impact than any other level of government on the day-to-day situation of people experiencing homelessness.”

He is an ambassador for the manifesto which is based on the Bill of Rights and the lived experiences of homeless people in South Africa’s major cities.

In Cape Town, where the homeless community has been at odds with the metropolitan municipality, the primary needs are shelter and dignity.

Lindzay Geneva, who lives on the streets of the affluent Rondebosch suburb, wants the city’s social workers to treat the homeless with greater respect. “Even though we’re staying like this, it doesn’t mean we are not people,” she said.

Housing was another obvious concern.

“There’s a lot of open spaces and empty buildings,” said Geneva, who is willing to pay for accommodation but refuses to go to a shelter after ill-treatment at the now-infamous Strandfontein temporary homeless shelter set up during lockdown.

Like many South Africans, Geneva refuses to vote because she doesn’t believe anything will change. “They make us feel like we don’t want to vote.”

Housing was also on the top of Geraldine Crew’s list. “I really want to have an address now. For a long time I haven’t had one.” Her home is a makeshift tent made of cardboard, covered in black tarp and secured with bricks. We met her on the banks of the Liesbeek River in Rosebank.

“I just want to be treated with respect,” said Crew, who much like Geneva has had unfriendly encounters with the city’s officials.

Thando Ndaliso says he’s tired of “living like a dog” and will settle for a “decent tent” if the municipality can’t assist him with housing. “I want to live like other people,” he said.

Housing, employment and safety are top of Noleen Turner’s list. The young mother, who lives opposite the Sea Point police station, said her child went into foster care shortly after she was born a few months ago. “The social workers took my child away from me because I’m living here in a tent, it’s not a house.” She has battled to find space in the city’s shelters, which are often full.

In August, Turner was one of 21 street dwellers whose homes were destroyed and belongings confiscated when City of Cape Town law enforcement officials conducted a raid at an informal homeless camp dubbed “Tent City”. According to mayor Dan Plato, the group was in violation of a streets by-law. The matter was taken to court.

John Brophy, who shelters in an old circus building in Observatory, doesn’t want to be discriminated against for being homeless. “I’d like to be poor and for that not to be a problem.”

“The city is treating us as enemies rather than as people,” said Moyo.

Housing lobby group Ndifuna Ukwazi (NU) is threatening to take the City of Cape Town to court to contest the by-law’s “constitutionality”. According to NU, the law seeks to criminalise homelessness and bypass the Prevention of Illegal Eviction from and Unlawful Occupation of Land (PIE) Act. The group has raised concerns that the by-law will grant the City the power to arrest any person refusing a “reasonable” offer of shelter.  DM/MC