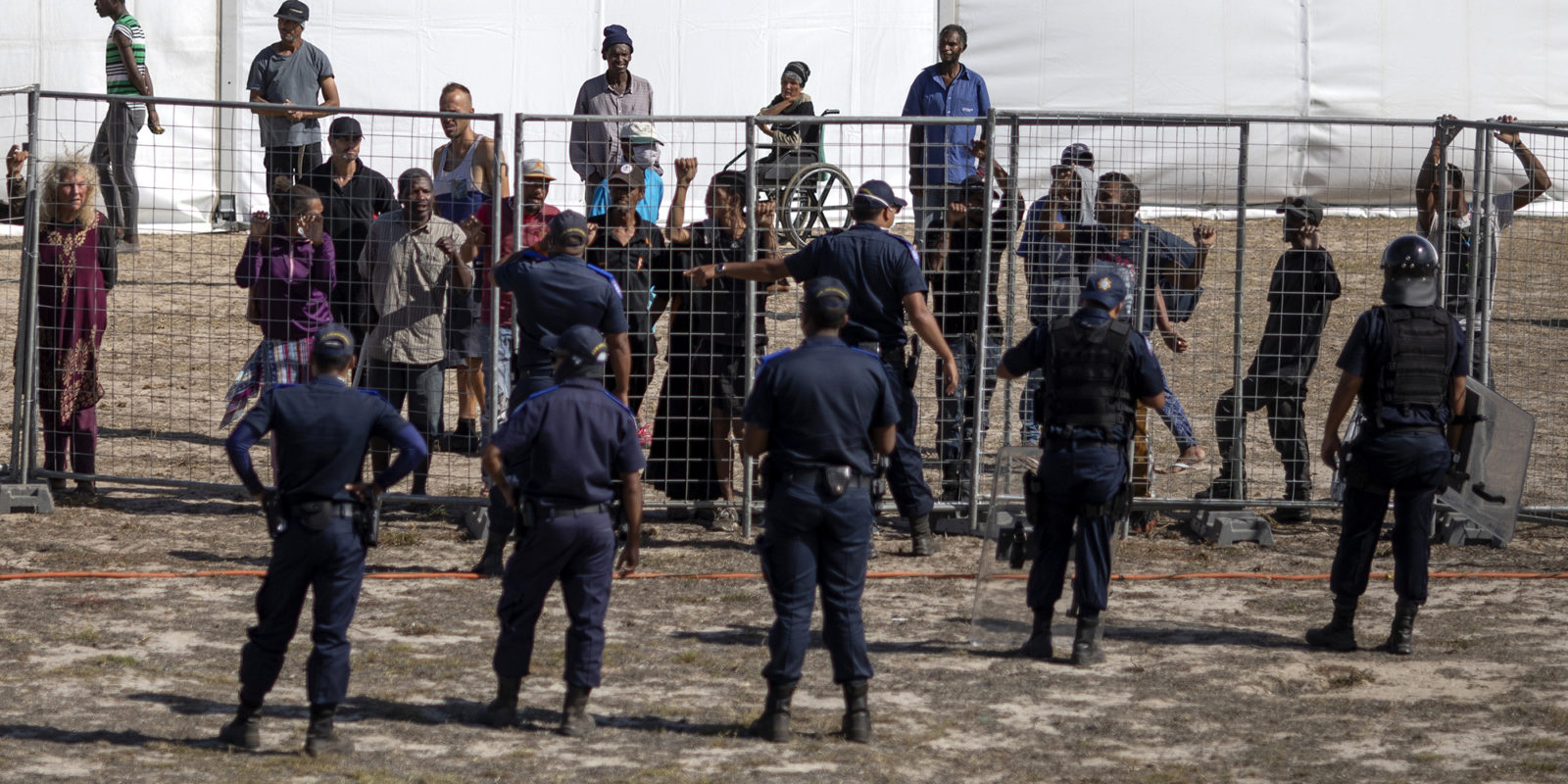 City of Cape Town law enforcement officers contain homeless people after they attempted to break down a fence during a media tour of the Strandfontein temporary homeless shelter site in Cape Town. (Photo: EPA-EFE / Nic Bothma)

The City of Cape Town has revealed plans to close the controversial Strandfontein temporary shelter and find new shelter options to accommodate street and homeless people during the coronavirus pandemic.

The City’s Mayoral Committee Member for Community Services and Health, Zahid Badroodien, on 10 May 2020 indicated the City was finalising the closure of the Strandfontein temporary shelter which has been at the centre of much criticism since its establishment two months ago.

Earlier in May the Strandfontein Homeless Committee took a stand and demanded to be part of a comprehensive plan which would determine how and where occupants of the camp would be relocated.

However, the committee’s legal representative, Vernon Seymour, has been barred from entering the site and was also informed by email from the City that he was not allowed entrance.

Two Strandfontein organisations have also sought an order from the Western Cape High Court to declare the actions by the City of Cape Town in violation of Disaster Management Amendment Act regulations. The court postponed the matter in order for all involved parties to find an amicable solution.

Badroodien said the City’s Social Development and Early Childhood Development Department was working closely with shelters and that space had been secured at the Haven Night Shelter, Oasis Reach for Your Dream, Ubuntu Circle of Courage, TASP, Cape Flats YMCA and the Happy Valley Shelter.

“The mayoral committee has also given the go-ahead for the procurement of prefabricated structures to be placed at vacant City land next to existing shelters where this is a viable option,” said Badroodien.

The benefit of this, said Badroodien, is that rather than temporary pop-up shelters, beds would remain available after the Covid-19 pandemic for the homeless to access at their convenience.

Badroodien reiterated the City is able to screen all people who had entered the Strandfontein site for Covid-19, including additional screening for TB. Those who tested for TB and underwent Covid-19 testing had been isolated, he said. According to Badroodien there have been no confirmed cases of coronavirus among the street people on site.

But Mandy van Willingh, secretary of the Strandfontein Social and Economic Development Forum, on 9 May 2020 said the City’s statement was disingenuous. She claimed that the City was trying to portray the idea of setting up the camp as successful, “which by all accounts was the furthest from the truth.”

“Screening happened hundreds of metres away from the entrance, in what was known as the medical tent, only homeless people were screened when they entered the camp,” she said.

She said the City was shutting down the camp as a direct result of a high court application filed by two Strandfontein organisations against the City.

She believed that the expeditious way homeless people were permitted to leave the camp on April 30 and May Day indicated that the “City has successfully washed their hands of a health crisis they have created”.

Badroodien said of the people still on site, at least 365 had indicated they would prefer to remain in a safe place, instead of returning to the streets. A long-term solution would be the development of spaces across the city in identified communities, he said.

He added: “The City’s Homeless Agency Committee has championed a progressive approach to helping our homeless community interested in accessing City services to do so.

“This includes rehabilitation services, upskilling programmes, reintegration and reunification with families as well as short-term employment opportunities so that they may engage in a sustainable way to exit homelessness.”

He said the City was “very excited” about this proposal, as there was a need for more shelter beds in Cape Town. This would be achieved through rolling out of additional safe spaces across the City.

Badroodien is of the view that the Strandfontein shelter had provided the city’s homeless with opportunities that would not have been possible without the establishment of this temporary accommodation.

However, the City had indicated from the outset the site was temporary and would cease to exist by next Wednesday, 20 May.

Badroodien said the City was mandated, in terms of its Integrated Development Plan, to proactively help the poor and most vulnerable in society, including the homeless, to access services and support regardless of their circumstances.

The Strandfontein site was evidence that the City exceeded the required level of response by providing shelter to street people as well as other ancillary services, Badroodien concluded. DM