Kick prejudice to the kerb: How we treat the homeless is a test of our inner ubuntu 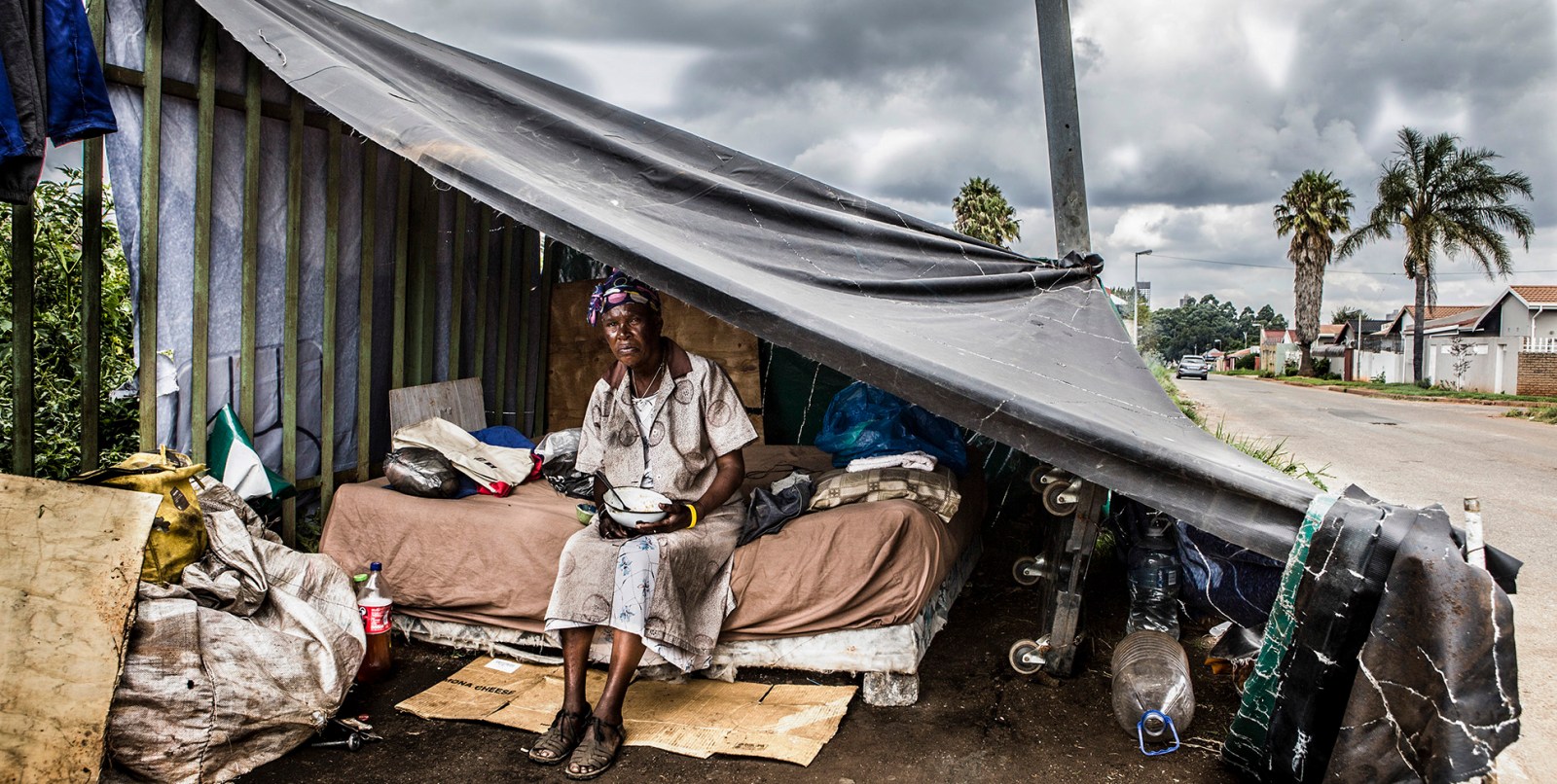 Gladys Qhoba has lived on the streets of Johannesburg for more than 10 years. She survives by recycling. (Photo: Mark Lewis)

Sunday, 10 October is World Homeless Day. True, commemorative days are often filled with lip service. But they can also be an opportunity to reflect on how we understand and address an important social issue and to think about what action our consciences and humanity require of us in response.

The Covid-19 pandemic has affected every area of life. One major area is people’s homes and security of tenure. Although evictions are still unlawful in terms of the Disaster Management Act, loss of jobs and livelihoods has meant that many people can no longer afford rents or bonds. Some have given up their homes to avoid going into debt.

Researchers have also drawn attention to how lockdowns have led to increases in domestic violence, which in turn have led to homelessness among women. According to researcher Paula Meth from the University of Sheffield, “women may flee violent home spaces, with no alternative refuge, or be evicted by abusive partners”. Meth says that while “much homelessness is dominated by men”, women, who are less visibly homeless, “endure unseen but insecure and unsuitable housing conditions”.

Another knock-on effect of Covid is that, faced with greatly increased social insecurity and hunger, many people have moved to the cities or into the inner cities, closer to shopping, business and residential areas, to try and eke out livelihoods on the streets as waste reclaimers, car guards or seeking piece jobs.

Sadly, surveys do not appear to have quantified this impact. Perhaps the government thinks that if you can’t count it, you can keep overlooking it. Thinking like this doesn’t take into account the Bill of Rights.

The few statistics there are, are alarming.

According to a report earlier this year in Daily Maverick, NGOs estimate that 14,000 people sleep rough in Cape Town and 15,000 in Johannesburg.

These numbers are growing. As you drive around Johannesburg, for example, you can see that there are many more people living on the streets, in parks, under highways, in abandoned buildings.

For these reasons, homelessness and ensuring sanitation, safety and security, as well as social services for people without formal homes should be local government issues. Unfortunately though, none of our councils is dealing with it sympathetically, holistically or lawfully.

On one extreme is the City of Cape Town, which criminalised homelessness in Cape Town last week when it passed the Unlawful Occupation by-law, which Ndifuna Ukwazi thinks is manifestly unconstitutional.

On the other is the general neglect of the issue by all parties, including the ANC, the DA and the EFF, who leave it to homeless people to make a plan and provide little support or even recognition of their plight and their rights. Yet, the Constitution’s protection of your rights becomes more important when you are at your most vulnerable. One of these rights is “to have access to adequate housing” (section 26 of the Bill of Rights).

In recognition of these challenges the National Homeless Network, a faith-based organisation, has just launched a National Homeless Manifesto that aims to ensure the homeless are not ignored by political parties (see articles by their ambassadors here and here). The manifesto focuses on five particular areas, all of which need action by local government and active citizens.

Coincidentally, Sunday, 10 October is World Homeless Day. Yes, commemorative days can be a waste of time, but they can also be an opportunity to reflect on how we understand and address a social issue and what action it requires of us.

In South Africa we can learn from communities, NGOs and even some government departments, that are innovating to address homelessness; we can emulate people who have been prepared to step across their class, racial and other prejudices to try and build “inclusionary neighbourhoods” from below.

For example, at Alberts Farm Conservancy in Johannesburg, where Maverick Citizen has reported on conflict and evictions, a committee has been set up and is working with the homeless people on solutions.

While we lobby the government, political parties and our councils to fulfil their constitutional duties, we shouldn’t wait.

There are many practical steps that can be taken, including setting up pavement gardens, following the example of Djo BaNkuna in Pretoria, or what Siya Ndlangamandla in Johannesburg calls “edible streets”; encouraging residents in our neighbourhoods to help recyclers by sorting and recycling their household waste to make it easier and cleaner; organising through churches and NGOs to assist homeless people with getting IDs, Covid vaccinations and basic education.

The forces driving homelessness are here to stay. In the years ahead, as global heating fuels migration and insecurity, homelessness and social marginalisation are going to grow. Even a caring, rights-based government will struggle. By acting now at a local level we have a chance to demonstrate new ways of building social cohesion and benefiting personally from the experience. Ultimately, our approach to homelessness is a test of our inner ubuntu. DM/MC

Down but not out: Why so many homeless people in Joburg reject municipal shelters