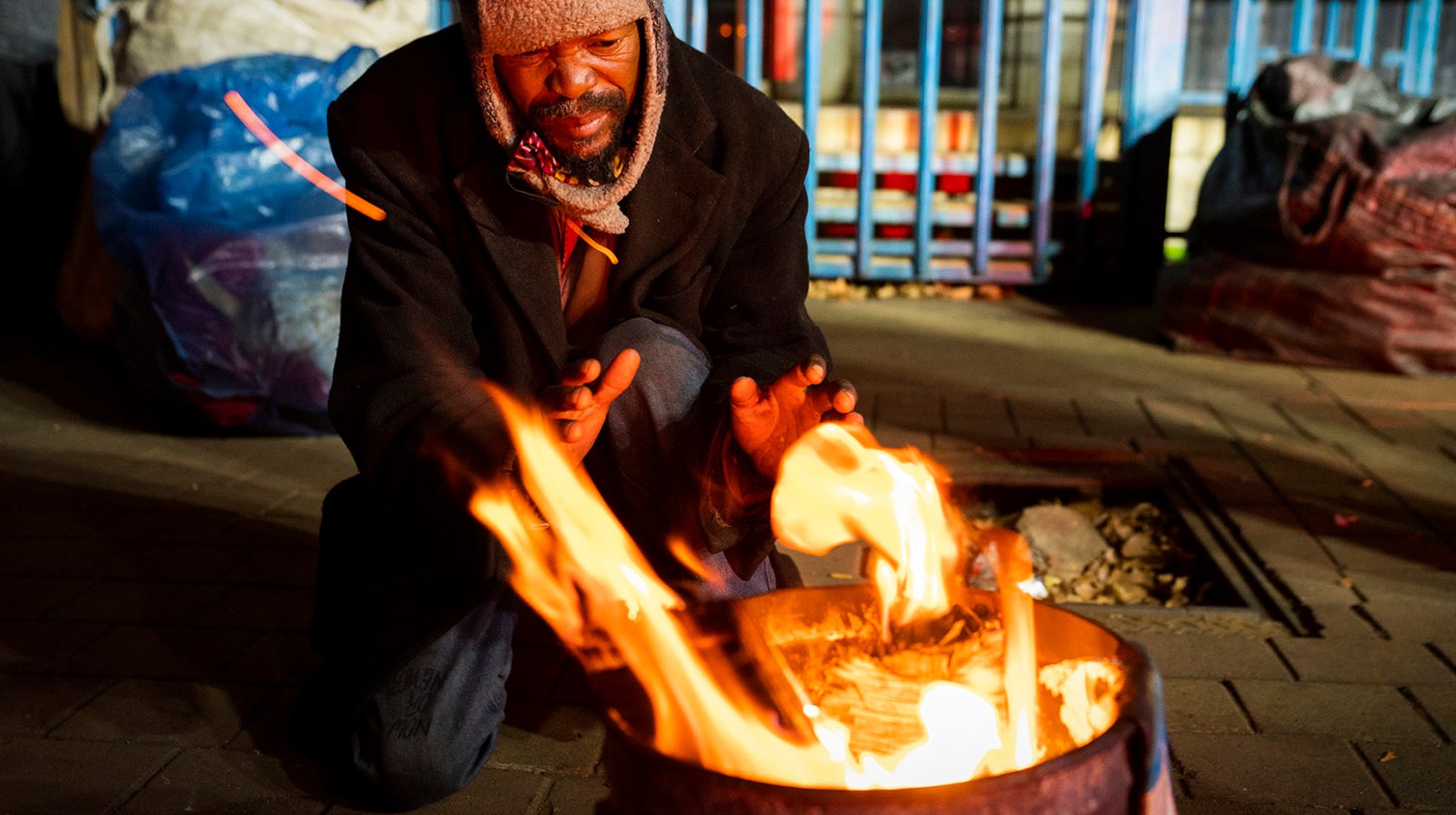 It is an irony that while homeless people can be very visible, their voices are at the same time un-heard. That is why the National Homeless Network has brought together a simple Homeless Manifesto for these Municipal elections. (Photo: Shiraaz Mohamed)

It is an irony that while homeless people can be very visible (seen at every traffic light in the centre of our cities), their voices are at the same time unheard. That is why the National Homeless Network has brought together a simple Homeless Manifesto for these municipal elections.

Prof Barney Pityana is an ambassador for the National Homeless Network.

For all of us who played our part in the Struggle, every election is a poignant reminder of what lies at the heart of our liberation: the high point of a democratic exercise, in which the billionaire votes alongside the homeless person, where all votes count the same regardless of the skin colour of the person who cast them.

Elections are the iconic symbol of what was achieved and it is not surprising that those photos from 1994 of long snaking queues of voters are still seared in our collective memory.

After 27 years of democracy, the fault lines in our society are all too visible: not only the old ones of colour, but the new ones of class, gender, location and even technology. We still have immense challenges as a nation but we also have the resources to tackle many of these. Voting matters more than ever because we invest politicians, national and local, with immense power and resources with which they can do good but similarly might do ill.

You would expect a long-standing advocate for human rights to be reminding you of the importance of elections: that you should be on the voters’ roll (this weekend is your last chance, if you need it, to register or re-register); and you should, on 1 November, actually get out and exercise that vote. You might use it for the party and candidates that you genuinely believe can make a positive difference. Or you might be casting your vote to keep out the parties and candidates who are most likely to abuse the power and resources that we give them to manage on our behalf.

It is not surprising – and indeed not a bad thing – that in voting we consider our own interests and the needs of our own neighbourhoods. Enlightened self-interest is a legitimate foundation of democracy; effective public policy brings together these different interests in a way that is for the good of all. But we also need to remember that there are many who do not have a vote (children and foreign nationals living in SA); and there are many whose votes can easily be drowned out: the marginalised, the disabled, the poorest of the poor.

There is one particular group that I would ask all of us, as voters, to remember when we consider how to vote: homeless people in our cities.

It is an irony that while homeless people can be very visible (seen at every traffic light in the centre of our cities), their voices are at the same time unheard. That is why the National Homeless Network has brought together a simple Homeless Manifesto for these Municipal elections. And I am pleased that they have asked me to be a spokesperson for this initiative.

It is the actions and the inaction of municipalities that has more impact than any other level of government on the day-to-day situation of people experiencing homelessness.

People usually become homeless when they cannot find work or have a broken support network because of family breakdown or mental health or addiction problems. But the life they then lead on the streets is directly affected by the local municipality: Is there a shelter or accommodation they can afford? Can they access primary healthcare? Are there basic facilities for personal hygiene and sanitation? Is law enforcement used in a way that respects their safety and honours their rights? Are there easy legal ways for them to try and make a living?

Taken together, does the municipality provide a pathway off the streets for people who fall into homelessness or are they treated as a problem to be ignored or swept away?

These headings – Shelter, Health, Sanitation, Safety and Work – are the five areas around which the National Homeless Manifesto has been built. But the demands are not grand and abstract; they are moderate and specific to each of our main cities and they have been generated in part by consulting with homeless people themselves. Homeless people across the country would all benefit from better municipal policies on shelters, but what Mangaung needs to do is different from Tshwane or Johannesburg.

Why does this matter to the ordinary voter?

I hope that it matters because, while voting for our own interests, we should also care about the interests of the poor. As an Anglican priest I am aware that that is key to the Christian gospel; and it is part of all our religious traditions. But it is also because the demands of the National Homeless Manifesto are good for everyone, not just for homeless people.

For example, in central Durban there were no free shelters for homeless people to use and they had to resort to sleeping illegally in parks and shop doorways. The Covid lockdown saw emergency shelters created for homeless men and women. The Homeless Manifesto asks that eThekwini continue to fund and indeed upgrade these shelters. The relatively small cost of doing so clearly has made life better for the homeless: but it has also benefited residents and shopkeepers who are now less likely to find homeless people in places that are inconvenient for everyone.

To take another example, the Homeless Manifesto (under the heading of Security) challenges the City of Cape Town to reverse its practice of fining homeless people for infringing by-laws. Doing so would of course benefit people living on the streets. But it would also help the wider citizenry since, as Cape Town officials have discovered, criminalising the homeless has actually made it harder for the government and NGOs to enact measures to help people to get off the streets. Not to mention the obvious fact that the cost to the ratepayer of enforcing this bizarre policy is considerably more than the funds actually raised from the fines.

In each major city over the next few weeks, the National Homeless Network will challenge the parties and the candidates running for office to consider the specific demands for their municipality and state publicly whether or not they would implement these if elected to office. I believe that this is an important way of making sure that asserting our political rights also translates into improving the social and economic rights of a highly disadvantaged group.

It is the right thing to do, morally and religiously. But it is also a way of improving the lives of all of the residents of a city, those in houses and those who are homeless.

The essential building block of human rights is the recognition of our fundamental equality.

Homelessness is a blight to our Constitution, negating the values that it enshrines. It renders the homeless to the indignity of inhumanity; literally, at times, it feels like the homeless are being dehumanised. Matthew 25 puts all of us under judgment, individuals and nations, if we fail to provide shelter and other means of life to those who are deprived by whatever reason.

And besides, in political terms, addressing homelessness is an enlightened exercise of public policy. Housing not only offers security for the homeless, it also assures safety, the maintenance of decent public health standards, controls the spread of disease and creates a decent society. The Preamble to the Constitution reminds us that it is our obligation to “improve the quality of life of all citizens”. In truth, any one human being who is dehumanised, dehumanises all of us as a society. That is what ubuntu teaches us. DM/MC