Global Indo-Pacific alliance: China, the dragon in the Quad room 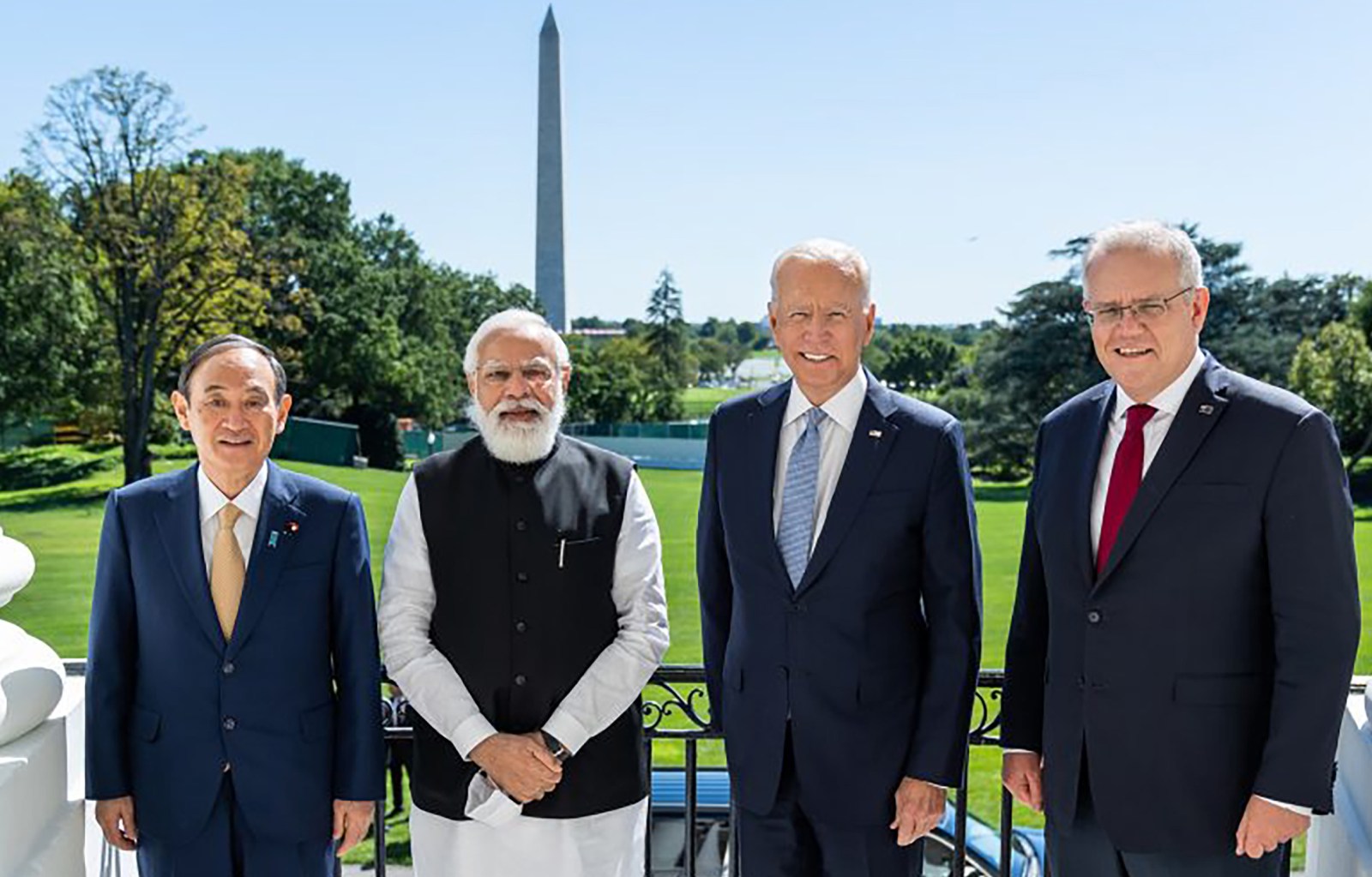 The Quadrilateral Security Dialogue, or Quad global alliance aimed at protecting the Indo-Pacific region, could be a way to contain China.

Some see it as an embryonic Nato (the North Atlantic Treaty Organisation), designed to contain China in the Indo-Pacific, just as Nato was created to contain the Soviet Union – and now Russia – in Europe.

Yet it has also driven wedges between some Nato allies. Beijing itself certainly perceives it as a threat and has reacted angrily against its formation. The governments involved punt it, in rather vague terms, merely as an association of democracies seeking a “free, open, prosperous, rules-based and inclusive Indo-Pacific”.

We’re talking about the “Quad”, the latest in a growing spiderweb of global alliances, which suggest a world order in flux. Quad comprises the US, India, Japan and Australia. It held its first in-person summit at the White House in September.

But the crux of this meeting “of liberal democracies” and arguably the real purpose of the Quad was in this statement, that “we recommit to our partnership, and to a region that is a bedrock of our shared security and prosperity – a free and open Indo-Pacific, which is also inclusive and resilient”.

“Together, we recommit to promoting the free, open, rules-based order, rooted in international law and undaunted by coercion, to bolster security and prosperity in the Indo-Pacific and beyond. We stand for the rule of law, freedom of navigation and overflight, peaceful resolution of disputes, democratic values, and territorial integrity of states.”

Morrison noted that: “The Quad is about demonstrating how democracies such as ours … can get things done that can deal with the big challenges that we face in a very complex and changing world.”

The word ‘China’ did not appear in any communiqués. Quad country officials insist that it’s not about “containing China” but advancing security and prosperity, more generally in the Indo-Pacific region.

But you don’t have to read too closely between the lines to discover that China is clearly always the dragon in the room at these meetings.

As Professor Benjamin Reilly of the University of Western Australia told the Australian Institute of International Affairs recently, the Quad has been around since 2004 (when the four states joined forces to deal with the aftermath of the east Indian Ocean tsunami). Then Australia and India, particularly, lost interest for a while (possibly because of the negative reaction from China).

“But in the last couple of years, again because of China’s aggressive behaviour in the South China Sea, China’s aggression towards India, its border dispute, and the anxieties about the rise of China more generally, the Quad has assumed this new importance, new prominence,” Reilly said.

China has been flexing its growing muscle, as Reilly suggested, most notably in the South China Sea where it is embroiled in acrimonious disputes with nearby states for ownership of islands.

Beijing has actually created artificial islands by dredging land over reefs and turned them into military bases. China is also launching military incursions around Japan’s Senkaku Islands, which China claims as the Diaoyu Islands. The Quad countries see China as projecting power into the Pacific to establish itself as the gatekeeper to this critical sea lane through which about a third of all global sea trade passes.

The US makes a point of deliberately patrolling the waters around these islands to underline its insistence that they are still international waters and do not belong to China. These patrols are a potential flashpoint.

The Chinese aggression to India that Reilly cites was the clash between Indian and Chinese troops along a disputed border in the Ladakh/Kashmir region in June 2020 in which 20 Indian troops reportedly died.

The other Quad members have also had recent spats with China. Beijing cut back on imports from Australia after Morrison’s government called last year for an independent probe into the origins of the coronavirus in China.

For Australia, Aukus is a step-change that will complement our efforts to build a network of international partnerships, such as with Asean [the Association of Southeast Asian Nations], our Pacific family, Five Eyes partners and like-minded partners in the region, like the Quad.

The formation last month by the US, the UK and Australia of “Aukus”, “an enhanced trilateral security partnership” has been seen as starting to give teeth to the Quad. Canberra said Aukus was “based on our enduring ideals and a shared commitment of our three countries to a stable, secure and prosperous Indo-Pacific region”. The focus would be on joint capabilities and interoperability, initially focusing on cyber capabilities, artificial intelligence, quantum technologies and undersea capabilities.

“For Australia, Aukus is a step-change that will complement our efforts to build a network of international partnerships, such as with Asean [the Association of Southeast Asian Nations], our Pacific family, Five Eyes partners and like-minded partners in the region, like the Quad.” Five Eyes is an intelligence-sharing partnership comprising the US, the UK, Canada, Australia and New Zealand, which stretches back to World War 2.

The first deal announced under Aukus was a joint venture in which the US and UK would help Australia build at least eight nuclear-power submarines. Australia said the nuclear-power subs were essential to safeguard Australia’s water because they could stay under water much longer than conventional subs and so remain undetected.

But Australia already had a joint venture with France to build conventional submarines, which Canberra abruptly cancelled. Paris was incensed, complaining it had been “stabbed in the back” and recalling its ambassadors from Australia and the US. Beijing was presumably delighted.

Morrison said that Aukus was also exploring collaborations to acquire other weapons such as Tomahawk and other missiles.

Elizabeth Sidiropoulos, the national director of the SA Institute of International Affairs in Johannesburg, also noted that the Quad had been around for a long time but had recently acquired much greater urgency, with a strong impetus from the US.

She added that it was understandable that none of the Quad members – not even Biden – wanted to publicly articulate that it was mainly about China. She noted that Australia was particularly wary because of the way its relations with China had soured over the past few years and the impact this has had on its substantial trade with China.

She also said it looked like the member states were trying to differentiate a bit between Quad and Aukus, which was more explicitly about security cooperation, whereas Quad ostensibly covers a wider range of functional cooperation on issues such as getting Covid-19 vaccines into Asian arms, fighting climate change and building Indo-Pacific infrastructure.

But she added that Quad clearly aimed to shore up geopolitical alliances and she characterised it as, in some ways, a mirror of China’s own huge Belt and Road Initiative, which originally looked like a development corridor from China to Europe via western Asia and Africa but had clearly evolved into a much larger strategic vehicle for China to exert global influence – if not domination.

“Both of these instruments have a clear geopolitical driver, even if it’s not articulated in the current context.”

Sidiropoulos said India was perhaps the least comfortable Quad member as it was also a partner of China – as well as Russia, Brazil and South Africa – in the BRICS forum and so faced some tough choices. For example, in space. And so at last month’s Quad summit the leaders created a partnership to exchange satellite data, focused on monitoring climate change and disaster preparedness.

And official sources told DM168 that it took BRICS three years to negotiate the satellite-sharing agreement mainly because of the rising tensions between India and China. It also took some mediation by South Africa between China and India to resolve the issue, they added.

How the Quad agreement on the same issue will now affect the BRICS cooperation is unclear.

What is clear is that the Quad is not an Indo-Pacific Nato. Unlike Nato it has no mutual defence treaty and no HQ or any other institutional form. But it is early days and how the Quad evolves will depend on – and maybe even help shape – how relations between China and the West evolve. DM168