The burning season: Wildfires sweeping across South Africa and Namibia have left devastation in their wake 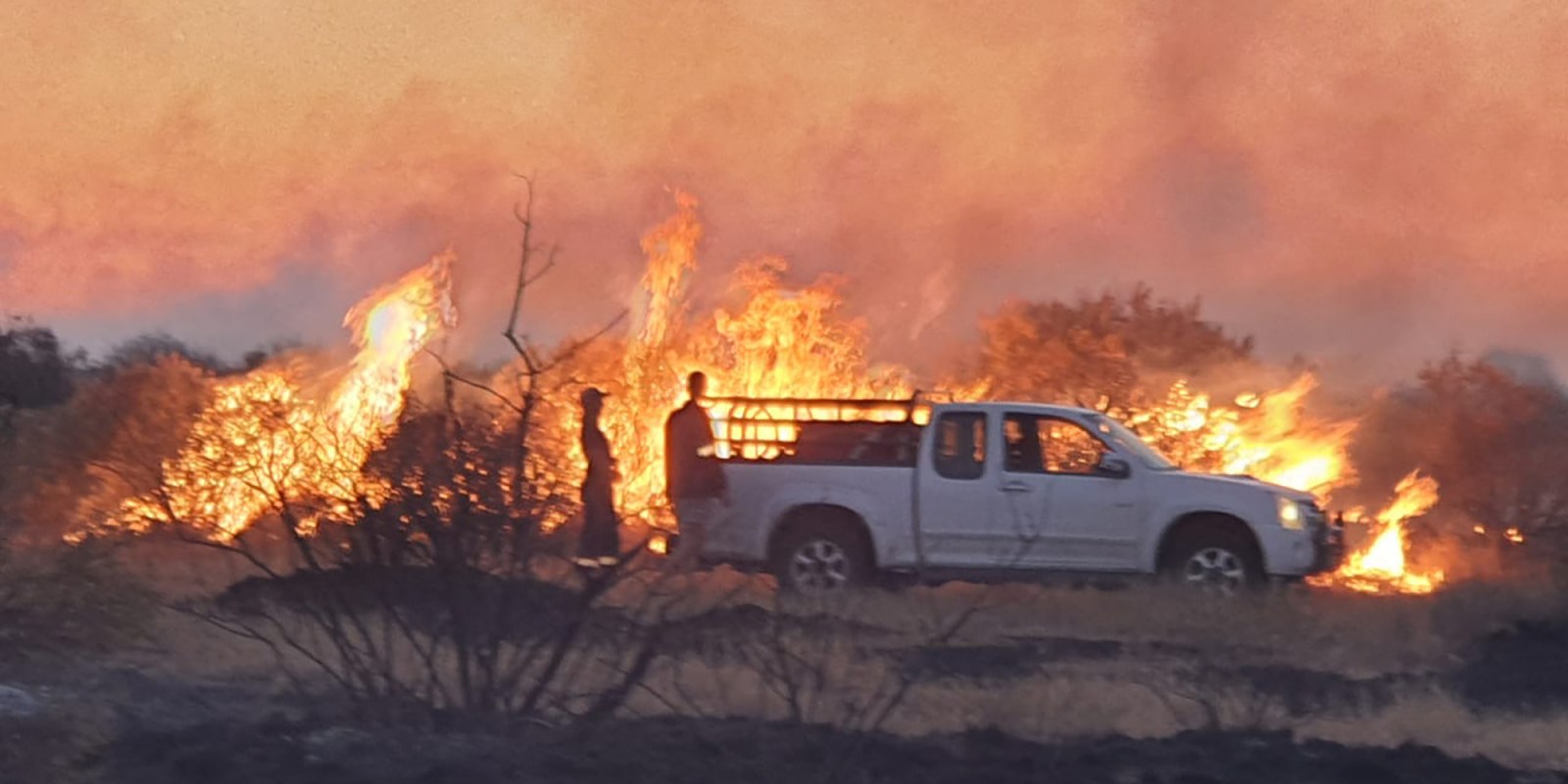 Farmers try to extinguish fires on the R49 between Mahikeng and Zeerust. (Photo: Supplied) 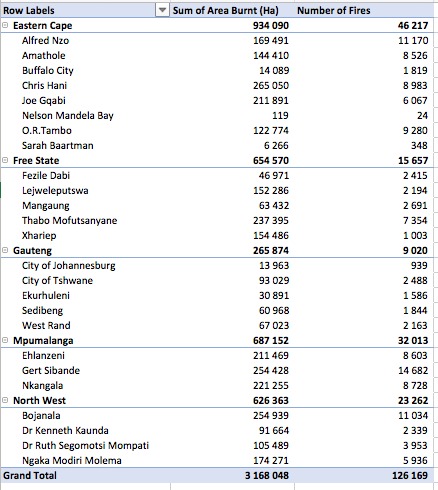 “About 8,000ha and six houses were burnt, four people were hospitalised and countless animals died… some were injured from the fire on the south of the Magaliesberg mountain recently,” he said.

“It is estimated that the losses are now between R3-billion and R3.5-billion for the season. About 12% of agricultural land and 6% of the North West province has been destroyed by wildfires… 41.3% of the area burnt from 1 May to 31 August is in Bojanala,” he said.

Parts of the Magaliesberg Biosphere, an international reserve proclaimed by UNESCO in 2015 for its exceptional natural, cultural and human characteristics, were burnt by veld fires last month. The reserve also forms part of the Cradle of Humankind World Heritage site.

Stoch said losses at the heritage site could not be quantified, and that the hidden cost is the loss to the environment and its tourism potential.

“There are also the costs of combating the fires. Most of the fires are being extinguished and fought by unpaid volunteers, going with their own teams at their own cost to save the lives of people they do not know in areas up to 200km from where they reside,” said Stoch.

He said the fires are due to a number of factors that include:

The new Intergovernmental Panel on Climate Change report warns that extreme weather events are likely to be more frequent as a result of global warming.

A number of countries have been hit by devastating wildfires in recent weeks, including Algeria, Italy, France, Turkey, America, Canada and Greece.

“We suspect that the latest fires could add another 60,000ha. Farmer Piet van Staden in the Dewetsdorp area lost 400 sheep with an approximate value of R1-million, while Jaco Burger from the Wepener area lost 1,000 of his 1,300ha,” she said.

The most damaging blaze was the Petrusburg fire on 13 July, when agricultural infrastructure was destroyed and 82,137ha of grazing land were burnt. Spreading at a rate of 3,851ha an hour, the fire took more than 27 hours to contain. A considerable number of livestock was injured and killed and numerous structures, including four residential buildings, were damaged.

Andrea Campher, Agri SA’s risk and disaster manager, said it was estimated that more than 270,000ha were destroyed by fire in the Northern Cape.

“Agri SA, via its structures, is in the process of assessing the damage, but is concerned that the challenges on the ground are much greater than the information at our disposal,” said Campher.

She said dry and strong winds had created ideal conditions for runaway fires.

“The extent of the damage is such that, should the affected districts be declared disaster areas, the state would not have the capacity to assist farmers. Given bureaucratic red tape, it will be impossible to provide disaster relief in time, because state resources are under pressure as a result of the Covid-19 pandemic and drought aid that is currently being rolled out in terms of the prevailing drought disaster declaration,” Campher said.

She said the demand for roughage was already under pressure due to feed aid provided to drought-stricken areas.

“Agri SA is encouraging the public to contribute to the organisation’s disaster relief fund, which is managed by the Agri SA Disaster Relief Foundation. Donors also qualify for a section 18(A) certificate. Funds will be used specifically for the purchase of stock feed, transportation costs and infrastructure such as fencing to safeguard livestock,” Campher said.

Thinus Botha, CEO of the Eastern Cape Umbrella Fire Protection Association, said they had a similar season to previous years.

“We are slowly coming out of a prolonged drought situation, and this should mean more grass and therefore more fires. The vegetation is slow to respond to the better rainfall due to the length of the drought,” he said.

Botha said they had had a devastating fire in the Ugie area, damaging extensive areas of the plantation.

“This definitely made the season more devastating. We implemented a new burn scar tool to utilise satellite technology to detect and map these burn scars. This technology has been used this fire season for the first time due to cost implications. Therefore we only monitored the grassveld in the northern part of the Eastern Cape, thus excluding the Sarah Baartman district area,” he said.

Botha said they found astonishing results and would like to continue with the product, but that they needed to find funding.

“Since May this year, the system detected more than 36,000 burn scars with a total burnt area of more than 910,000ha. We had spring rain that started over some areas and are now hoping for follow-up rain that will assist in turning the seasons,” he said.

Dordrecht Fire Association member, Carl Miles, said there had been an increase in veld fires this year in their area compared with 2020.

“We only had one small fire last year and there was nothing major. This year alone we have had 14 big fires. Two of these fires were caused by human negligence,” he said.

Komani farmer Simon Sutton said they had more than 19 separate fires in their area over the winter season.

“Our area covers the Bonkolo Basin and the Hangklip Valley around Komani. Most, if not all, of these fires have been lit on purpose. We have had a huge problem this year with fires that started in the mountains of Zingquthu and Lesseyton,” he said.

Sutton said it is a tradition of the farmers in these areas to burn the mountain veld to regenerate growth and remove old veld.

“However, these fires are not controlled and often lit on windy days and they do not care if the fires burn their entire veld and enter the neighbouring farms. This practice is actually degrading to the veld as it damages the roots of the grass and removes tons of carbon from the soil,” said Sutton.

He said due to the better rainy season of 2020/21, most areas have more grass than previous years.

“This has also been one of the reasons why the fires have been more damaging this year and more difficult to kill and control. There is a need to educate farmers about the negative effects of uncontrolled burning and the damage it is causing to the environment as a whole,” he said.

Sutton said uncontrolled burning led to soil degradation which led to erosion and loss of valuable grazing for livestock.

KwaZulu-Natal Fire Protection Association operations manager Simon Thomas said they had seen a decline in fires as a result of intermittent rains throughout the dry season.

“This year alone, a total of 580,480ha were burnt countrywide, from May to September.”

“In the Omusati region, 21 goats and sheep were burnt to death and two cattle posts were destroyed. In Khomas, 25 farms burnt and 491 livestock and game were killed… one human life was lost and four people were severely injured,” said Shifeta. DM/OBP

The burning season: Wildfires sweeping across South Africa and Namibia have left devastation in their wake