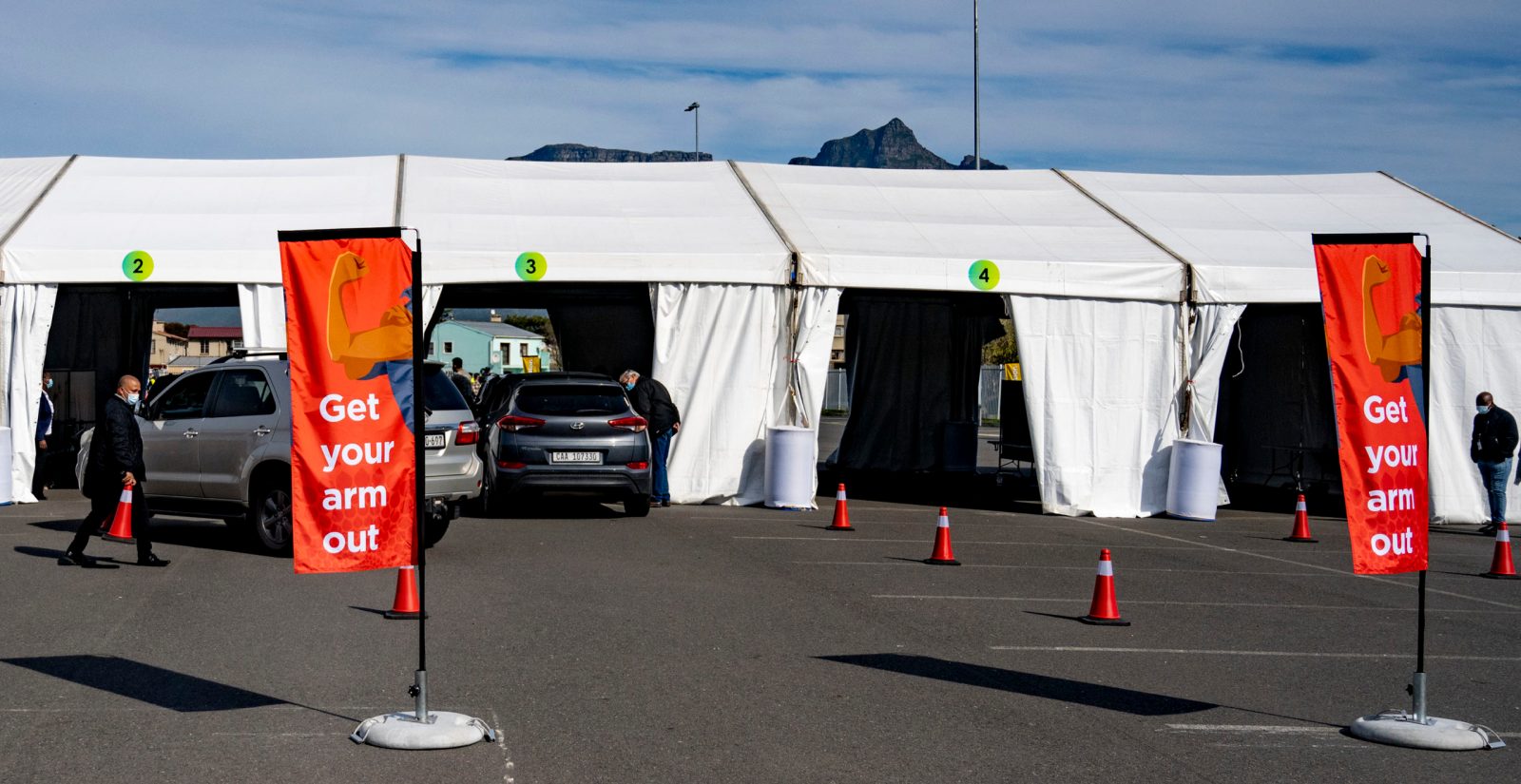 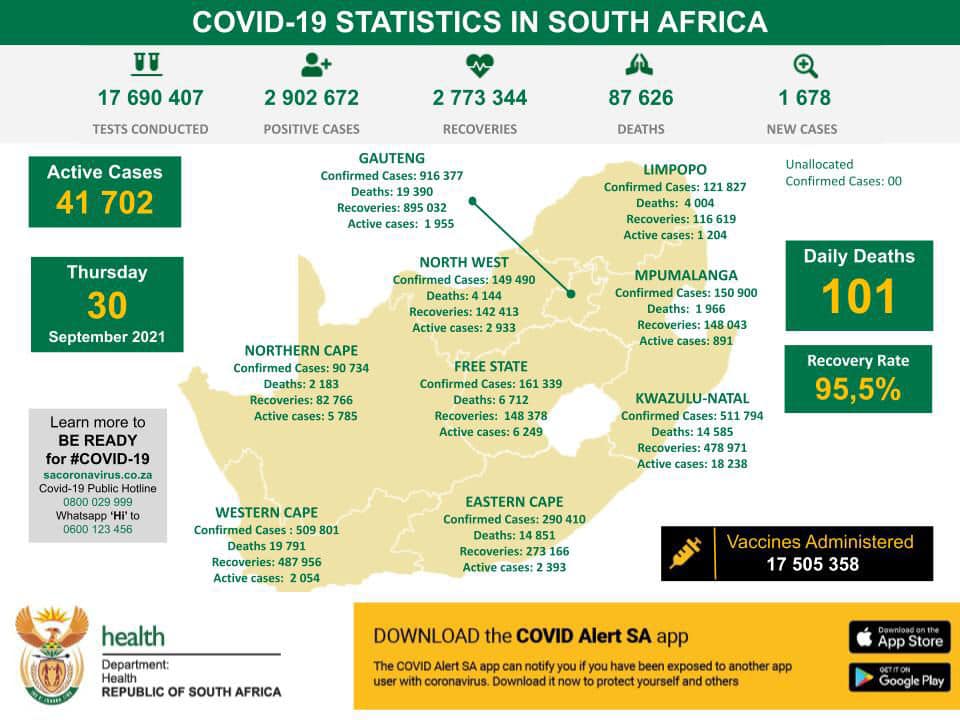 New York City public school employees are asking the US Supreme Court to halt the city’s Covid-19 vaccine mandate, which will be enforced on 1 October.

Escalating threats to US teachers and school board members over campus mask mandates and quarantines are causing alarm. Idaho doctors see an alarming trend — maternal deaths, stillbirths and sicker babies — in a state where hospitalisations keep setting records, healthcare is rationed and vaccination rates are low, the Idaho Statesman newspaper reported.

New US cases slowed by a third this month, from a seven-day average of more than 161,000 on 1 September to about 107,000 on Tuesday, according to the Centers for Disease Control and Prevention.

New York City public school employees are asking the US Supreme Court to halt the city’s Covid-19 vaccine mandate, which will be enforced on 1 October.

“Absent intervention from this Court, in less than two days, thousands of public-school employees will be forced out of work,” the workers said in their emergency request to the justices on Thursday.

They note that while other municipal employees are allowed to opt out of the vaccine requirement by agreeing to weekly Covid testing, that option is not available to public school staff.

US infection trend slows in September

New US cases slowed by a third this month, from a seven-day average of more than 161,000 on 1 September to about 107,000 on Tuesday, according to the Centers for Disease Control and Prevention.

Daily deaths, which peaked at more than 2,000 in mid-September, have declined 12% since then by the same measure. The number of patients hospitalised with confirmed Covid-19 fell to about 73,000 from a peak in early September, a 22% decline, according to data on the CDC’s website.

While all US states except California are still listed as “high transmission” areas in a CDC update published Thursday, a majority showed a week-on-week decline in new cases. Alaska, Maine and North Dakota led the nation in the percentage increase in infections.

The move to virus alert Level 1 from Level 2 will help shore up an economy that’s grappling with record high unemployment and bruised investor confidence. It will also make it easier for political parties to campaign for municipal elections scheduled for 1 November.

Greece imposed a night-time curfew on Thessaloniki, the country’s second-largest city, as the number of cases rose in the past few days in the city and the area around it. The curfew is from 1am to 6am and will apply from Friday, 1 October. Bars, restaurants and cafes may not play music. Authorities also banned any gathering, in the entire country, of more than 20 people.

Escalating threats to teachers and school board members over campus mask mandates and quarantines are raising alarm among national K-12 groups.

“It’s not something we signed up for,” said Teresa Hill, a principal of Walden Grove High School in Tucson, Arizona. “We had no idea that becoming an administrator meant you were going to have to deal with angry people like this.”

School leaders, teachers and staff, carrying out guidance to reduce the spread of Covid 19 as students returned to classrooms, are encountering harassment and threats of violence online and in person. The frayed tempers and threats follow more than a year of lockdowns that forced many parents to supervise their children’s learning online from home, while other campuses remained open with Covid mitigation policies.

“I’ve never seen anything like it in my life,” said Stacy Seyb, a specialist in high-risk pregnancies at St Luke’s Magic Valley Medical Center in Twin Falls.

European countries with lower vaccination rates could see a surge in Covid-19 infections, hospitalisations and deaths over the next two months, according to the European Centre for Disease Prevention and Control.

The EU agency, in its latest Rapid Risk Assessment, said the virus’s high level of circulation within the population puts poorly inoculated countries in the EU and European Economic Area at risk between now and the end of November. The group also cited the concern that even vaccinated people can experience severe outcomes from infection.

At Los Alamos National Laboratory in New Mexico, a hub of vaccine research, three dozen employees are suing over an order by the lab’s primary contractor, Triad National Security, requiring workers to be immunised or face possible dismissal, the Santa Fe New Mexican reported. Jonathan Diener, an attorney representing the employees, said the mandate “is invalid because people have the right to make their own medical choices” and argued the vaccine causes adverse reactions to those already infected by Covid-19.

The Broadway musical Aladdin was halted a day after it reopened after some of the company members tested positive, the Washington Post reported, citing a company statement.

The statement came hours after Disney had tweeted with the hashtag “Broadway is Back.” Disney said tickets would be refunded.

About 70% of African nations missed a target of vaccinating one out of every 10 people by today, the World Health Organization said. The delivery of shots needs to double for the continent to meet the next target of inoculating 40% of the population by year-end.

The slow rollout in many parts of the world illustrates the problems that the Covax distribution programme has faced, potentially prolonging the pandemic and increasing the risk that more worrisome variants will emerge.

The EU’s least vaccinated country is starting a lottery game to boost jabs. The Health Ministry in Bulgaria, where institutional distrust and doubts about the vaccines have slowed down inoculation, will hand out 102 smartwatches to people who are vaccinated in the next month. About 20% of the population in the Balkan country has been vaccinated so far — and its Covid death rate over the past 14 days is eight times as high as the EU average.

Neighbouring Romania reported a record number of cases, as more than 12,000 people tested positive in the past 24 hours and 176 died. Romania is one of the worst-hit nations in Europe’s fourth wave of the pandemic and ranks second-last in vaccination in the EU.

EU to phase out of pandemic support

The European Commission wants to phase out state support next year that has seen governments pledge or give companies about $3.5-trillion to keep them going during the pandemic.

The EU’s executive branch is asking governments to back a phasing out of crisis support which will end many support programmes by 30 June. Governments can comment on the proposals and demand tweaks before they become final.

The Delta variant may have turned SARS-CoV-2 into “one of the most transmissible respiratory viruses we’ve ever seen, far more transmissible than influenza A,” according to Neil Ferguson, the Imperial College epidemiologist whose modelling is used by the UK government. The reproduction rate of the virus may be between six and nine if one takes literally the idea that Delta is at least 50% more transmissible than the Alpha variant, which was itself about 50% more contagious than the original strain.

Roche and Regeneron Pharmaceuticals’s antibody cocktail reduced the viral load in hospitalised Covid-19 patients in a clinical study, supporting the prospects of a drug that could possibly relieve pressure on healthcare systems.

Roche said the results of the study support data from a larger clinical trial in the UK called Recovery that shows a benefit to hospital patients who receive Ronapreve plus the standard-of-care treatment. DM