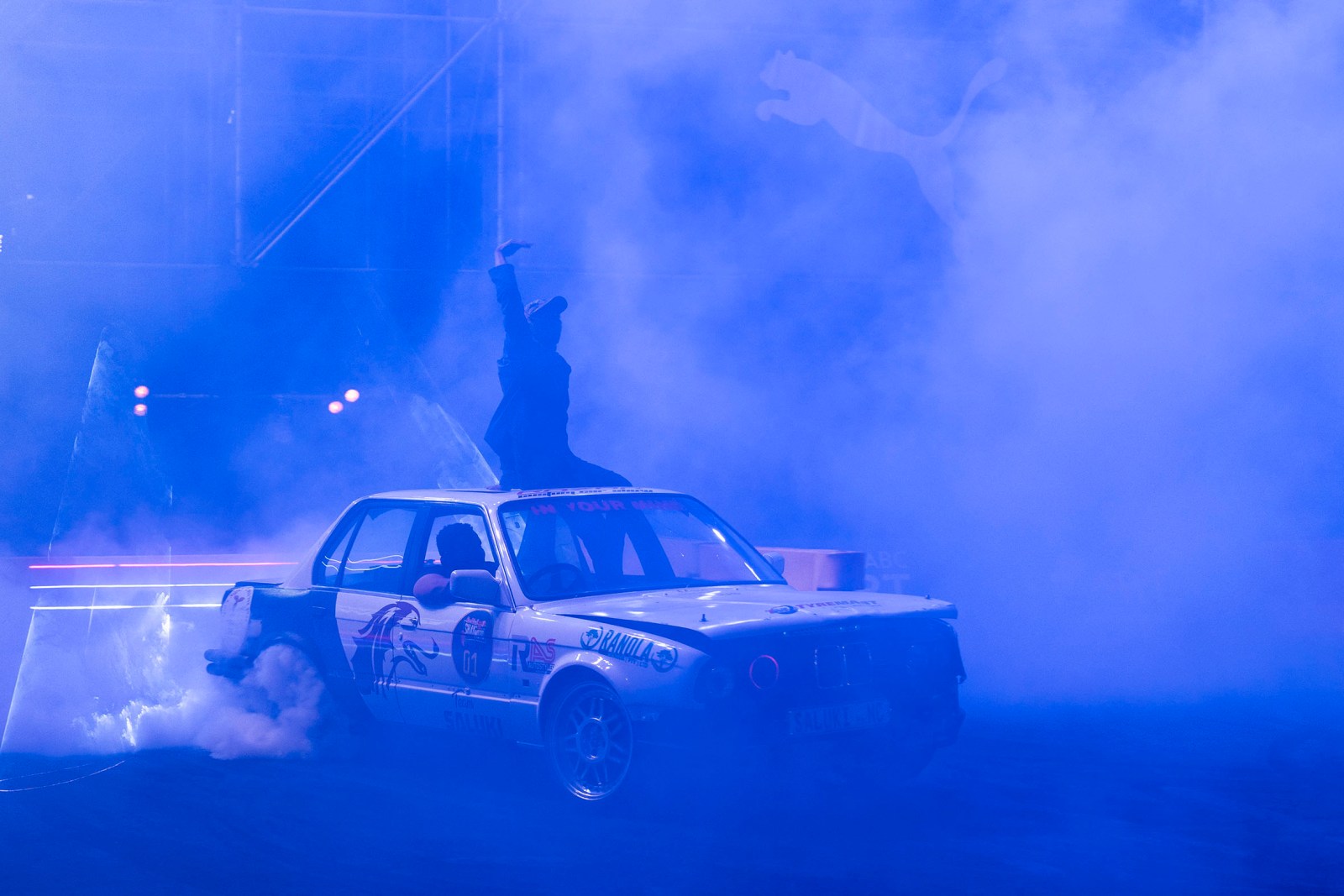 19-year-old Lorenzo Dada manoeuvres his way out of the ‘The Kitchen’ with stuntman Redwan Hoff atop his car. In this stage of the course the Dada needed to spin his car between two sets of barriers, moving backwards as far back as possible. (Photo: Shiraaz Mohamed)

Held at a closed venue south of Johannesburg, 12 of South Africa’s top spinners battled it out as they showcased their spinning skills and signature stunts.

Dubbed the biggest spinning event in South Africa, the Red Bull Shay’ iMoto returned, celebrating its third year — and like last year, without crowds. The show was streamed live on Red Bull TV to viewers around the world.

Spectators viewing the event online sat glued to their screens as they rooted for their favourite spinners. One was Quinton Moodie from Cape Town, who expressed disappointment at not being able to attend.

“I would have loved to attend the event, but due to the pandemic, unfortunately, I could not. It is nice to experience the atmosphere, the smoke and the excitement. It all adds to the experience,” Moodie said.

Held at a closed venue south of Johannesburg on 10 and 11 September, 12 of South Africa’s top spinners battled it out as they showcased their spinning skills and signature stunts. Each contestant was given 2½ minutes to complete the course, which consisted of a number of stages: The Target Slide, The Kitchen, The Box /Make-Out Corner, Side to Side/Bread and Butter and the Power Slide.

The course was challenging for even the most experienced spinners and the pressure mounted as they battled for first position.

Said competitor Sunesh “Sushi” Pursad: “At a normal event there is no pressure and there is room for mistakes. Here there is no room for mistakes, the pressure is high and your car has to be in perfect working condition; you can’t let anything go wrong. But the course was great, it was challenging, but great at the same time.”

Shahiem Bell, who has been judging the Red Bull Shay’ iMoto for the past three years,  said there was a huge improvement in the skill displayed by the contestants.

“The showmanship was upped a level from last year because contestants knew they had to pull out all the stops to be a winner this year. We had a youngster that came into the event that was a total surprise to everybody. Just because of the level of his confidence he put on a very good show and was entertaining. People got to like him a lot.”

Speaking to Daily Maverick ahead of his qualifying run, Eddie Rasta said: “Last year I came second; my fans expect me to win this year. But for me as a driver there is too much pressure because of the lack of crowds. It feels dead, it feels like you have been ordered to do what you have to do. The crowd always hypes you up. At the end of the day you need your fans. They motivate you to do your best.”

He finished in seventh place.

The final was closely contested by Cape Town’s Chadwin “Boksie” Hadjie and Samkeliso “Sam Sam” Thubane in a no-holds-barred battle. Hadjie threw every ounce of showmanship at it, but it was Thubane landing his signature stunt —  jumping out and then back into the car counter-clockwise — that sealed the win for him.

“I feel so excited, I’m happy. I was also feeling nervous at first, but at the end of the day I took the trophy. This win actually means a lot to the team, it’s something that we worked for. Today I have made a lot of people proud,” said Thubane. DM