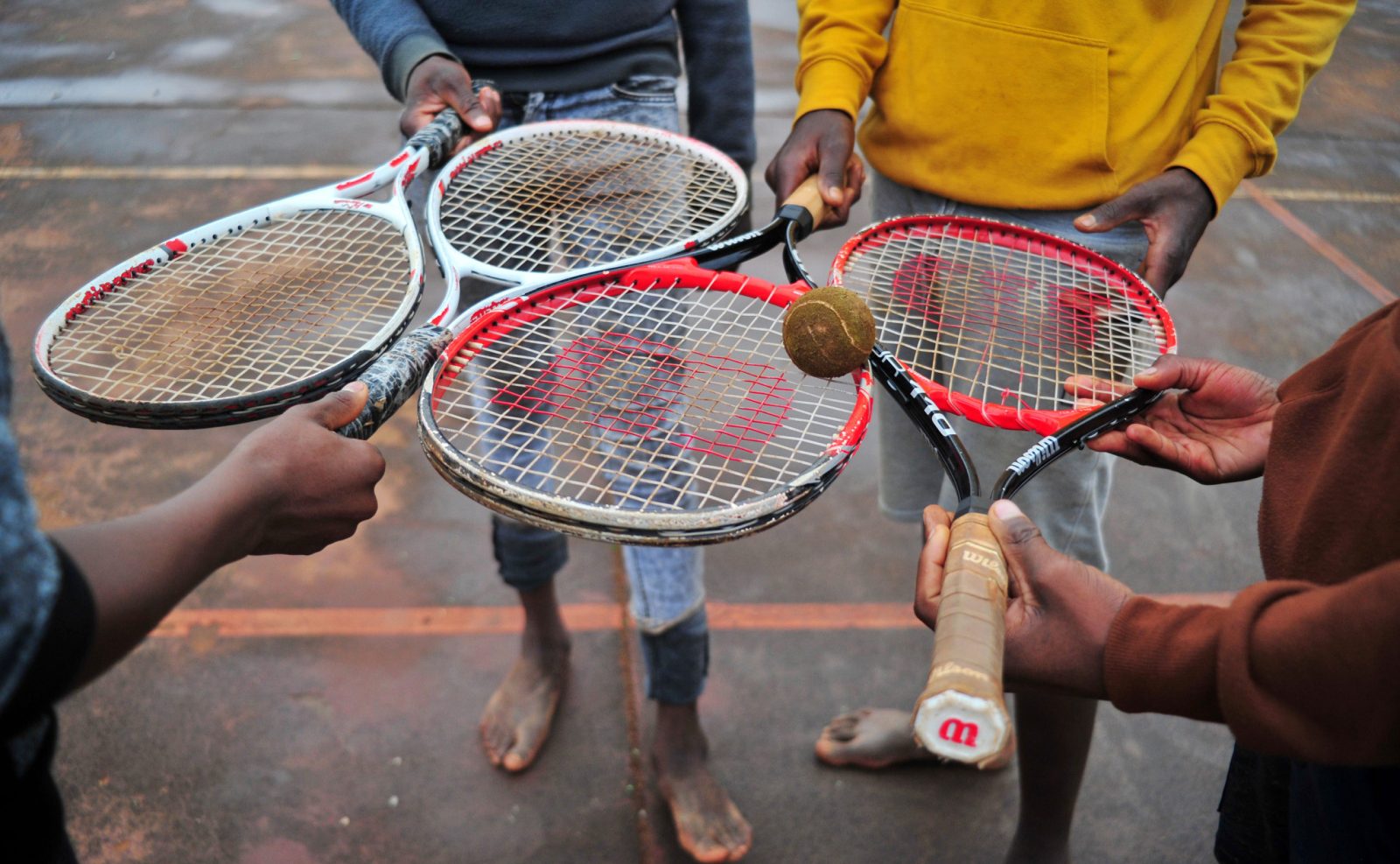 The love of the game of tennis keeps youngsters from Thomo village busy on a dilapidated combi court in their village. (Photo: Lucas Ledwaba / Mukurukuru Media)

The youngsters of Thomo in Limpopo may have a holey net, no shoes, only one tennis ball and a few old rackets, but they are determined to play tennis – the game they love.

When the bell rings to bring an end to the school day, Ntwanano Mashimbye and his friends have just one thing on their minds – a game of tennis.

Their village of Thomo near Giyani in Limpopo province is nothing like Wimbledon, the London suburb where each year the world’s great tennis players meet to enthral the crowds and millions of television viewers with their skills.

In fact, Wimbledon stars would most likely get a shock were they to come anywhere near this dilapidated combi court where Mashimbye and his pals play barefoot. It is typical of many rural villages without proper recreation facilities where, if the youth are not playing football, they find an outlet for their idleness at the bottom of beer bottles in taverns, rowdy establishments that are about the only source of entertainment in these parts.

“We just love this game. It started as a hobby to keep away boredom but in time we got hooked,” says the high school learner.

Football, played on rugged, dusty fields like the one adjacent to the court, remains the sport of choice in Thomo and many other rural villages of Limpopo.

After all, unlike tennis, footballers only need to clear a patch of land, put up goalposts and organise a ball to play.

But while scores of other boys dream of one day donning the Bafana Bafana shirt, Mashimbye and his pals dream of Wimbledon. They manage to catch snippets of tennis on TV and when they have enough data, they check out the latest news about the game on their cellphones.

“We have only one ball,” says Ntsheketo Chauke, holding up the dark, wet ball that’s long since lost its bounce. When a shot goes over the short cement walls around the court, one of the youngsters runs to retrieve it as the players take a breather. The boys, about eight of them in all, usually play doubles because of the shortage of balls.

The quality of their worn-out rackets – whose strings have lost the tension that is required to hit a good shot – reflects their deplorable surroundings.

The court where they play every afternoon in Thomo village is littered with broken bottles, and does not have a proper net.

In another time, a few years ago, after it was built by the government, the combi court looked in good enough condition to enable future international sporting champions to hone their skills.

“We have no coaches. So those that play tennis learn from TV,” says Nkhenso Mhangani, explaining that the lack of guidance and equipment could have led to the court being used for other things than what it was initially built for.

As the older boys whack the ball on a court soaked from a light afternoon thundershower, the younger ones run around, climbing over the walls, having a good time.

Four years ago a retail store outlet came to the boys’ rescue with sponsorship of equipment. But that was only for a few months.

Now they rely on donations from parents to buy tennis balls.

“We just want to play. Maybe one day we will be able to get proper balls and rackets. But we will continue playing here,” says Mashimbye. DM168/Mukurukuru Media

HOW YOU CAN HELP

The youngsters’ greatest wish is to attend a live tennis game sometime in the future.

But for now, their wish is to get proper playing equipment, balls, rackets, shoes, a net, and perhaps some coaching clinics.

If you would like to support the Thomo tennis fans in any way, contact the editor of DM168 at [email protected], or you can make a donation into the following account: