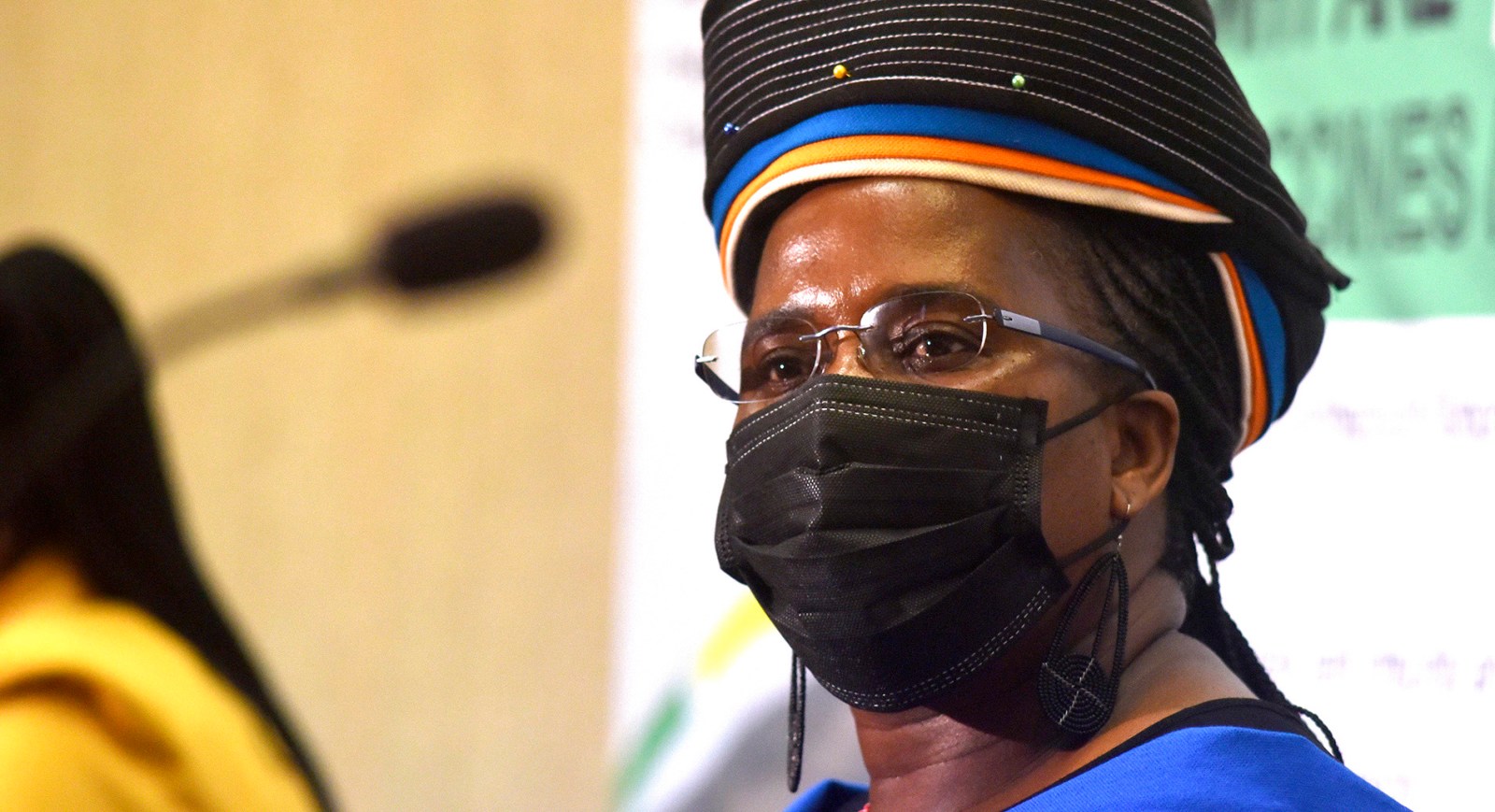 Eastern Cape Health MEC Nomakhosazana Meth has said one way to get more men to vaccinate is for women to withhold sex until their partners get the jab. Meth was speaking as the province recorded one million fully vaccinated adults.

The Eastern Cape is setting its sights on completing its first vaccination drive by April 2022, by which time it hopes to fully vaccinate a further 3.5 million adults, Health MEC Nomakhosazana Meth said in Gqeberha on Wednesday.

While discussing the results, and the concern over the low numbers of men coming forward to be vaccinated, Meth said women, especially unmarried women, should consider withholding sex from unvaccinated men.

“I think it is a good idea to say no vaccine, no sex,” Meth said. “Especially for unmarried women. It will protect both of you.”

Meth was speaking after the province reached a milestone of having fully vaccinated one million adults – 62% of whom were older than 60. She said 1.6 million people have currently registered for the jab in the province.

Meth said the government has consistently expressed its concern over the low numbers of men coming for vaccinations.

“It is too low. It is not good enough. We are doing everything in our power to encourage our brothers, fathers and grandfathers to do the right thing and get vaccinated. We have campaigns mainly aimed at men by taking the life-saving jab directly to them [in places] like taxi ranks, malls, places of having fun and restaurants,” she said.

Meth said they should be gathering scientific evidence on why men are hesitant or dismissive of the vaccine.

Dr Litha Matiwane, a deputy director-general in the Eastern Cape Department of Health, said in general men in the province were hesitant to get involved in health issues.

“Men are often dismissive of these things,” he said.

The chairperson of the Eastern Cape Council of Traditional Leaders, Mwelo Nonkonyana has previously called on the national government to lift restrictions on meetings so that they can hold an imbizo (gathering) to discuss the vaccine.

“Traditionalists have their own things… They believe they are not going to vaccinate, but instead are going to visit traditional practitioners for traditional herbs as they do not have enough information about the vaccine. They believe that their bodies do not know the vaccine and are not fit for them, hence the majority of men are afraid of vaccination.”

Nonkonyana said the lockdown added to the confusion around vaccines as no gatherings were allowed to help them explain the science.

“The government said again that vaccinations are voluntary, but there are other government officials saying people are not going to get their social grants if they are not vaccinated, and that conveys another message to people,” he said.

Meth said the current outbreak of coronavirus infections was mostly under control in most parts of the province.

“When Covid-19 hit the country at the beginning of March last year, the Eastern Cape was the butt of the joke with prophets of doom saying once we have a confirmed case, the virus will wipe us all out. People pointed to the fact that we are a mainly rural province, saying once the virus gets to our villages, that’s it for us. But we are not the ‘Home of Legends’ for nothing,” said the MEC.

“We are resilient people and we are proving everyone who wrote us off wrong, because we have adapted and we are doing our best not only to fight the spread of this vicious invisible enemy, but we are vaccinating people by their thousands daily. Yes, we made mistakes along the way because Covid-19 was new to us all. We’ve owned up to those and we have not repeated them.

“Obviously, there will be areas of concern, like, are we testing enough people? Are we reaching as many people as possible with the vaccine? Are we winning the fight of dispelling the untruths peddled by conspiracy theorists?

“The answer is, yes, but that does not mean we have won just yet. The fact that we have administered the Covid-19 jab to 1,393,376 people – who are now fully vaccinated against this virus – is something worth noting and celebrating,” Meth continued.

“Some people have said ‘but it’s only a million people’ – not mentioning that these are fully vaccinated people. As of Sunday, we had administered 1,929,675 doses in the province, with some getting the Johnson & Johnson single [dose] jab while others have received one of two doses of the Pfizer vaccine.

“At this rate we should have fully vaccinated at least two million people by the end of the year.”

The MEC said the province is administering an average of 26,000 jabs a day but wants to surpass its peak of 30,000 a day to achieve its target of fully vaccinating 4.5 million people by April 2022.

“It’s one million people down, and just under 3,5 million to go. We can see the finish line and we will reach our herd immunity within our targeted deadline.

“We have enough doses of both the J&J and Pfizer vaccine. We just need people to continue coming forward to any of our easily accessible vaccine sites. We will soon administer the jab in schools and institutions of higher learning, mainly targeted at our 18 to 34 age group. We will announce details in due course.

“We’ll also partner with taverns so that patrons will get their jabs also. And we’re working with traditional leaders in rural areas to ensure the vaccines are easily accessible in remote areas,” said the MEC.

Meth said while it was a person’s right not to get the vaccine, she was concerned that some people have been misled by false messaging. “They are making a life-and-death decision based on misinformation.”

She said the department was now focusing on municipalities with low vaccination numbers. Many of them encompass villages situated along the Wild Coast in deep rural areas. These include Matatiele, where only 21% of people are vaccinated; Mbizana (17%); Ntabankulu (17%); Mbhashe, including Willowvale, Elliotdale and Dutywa (21%); Engcobo (20%); Intsika Yethu around Cofimvaba (19%); Sakhisizwe around Elliot and Cala (17%).

At just 10%, Nyandeni local municipality in Libode had the lowest number of vaccinated adults in the province.

In Nelson Mandela Bay, the largest metro in the province, 31% of the adult population has been vaccinated. DM/MC