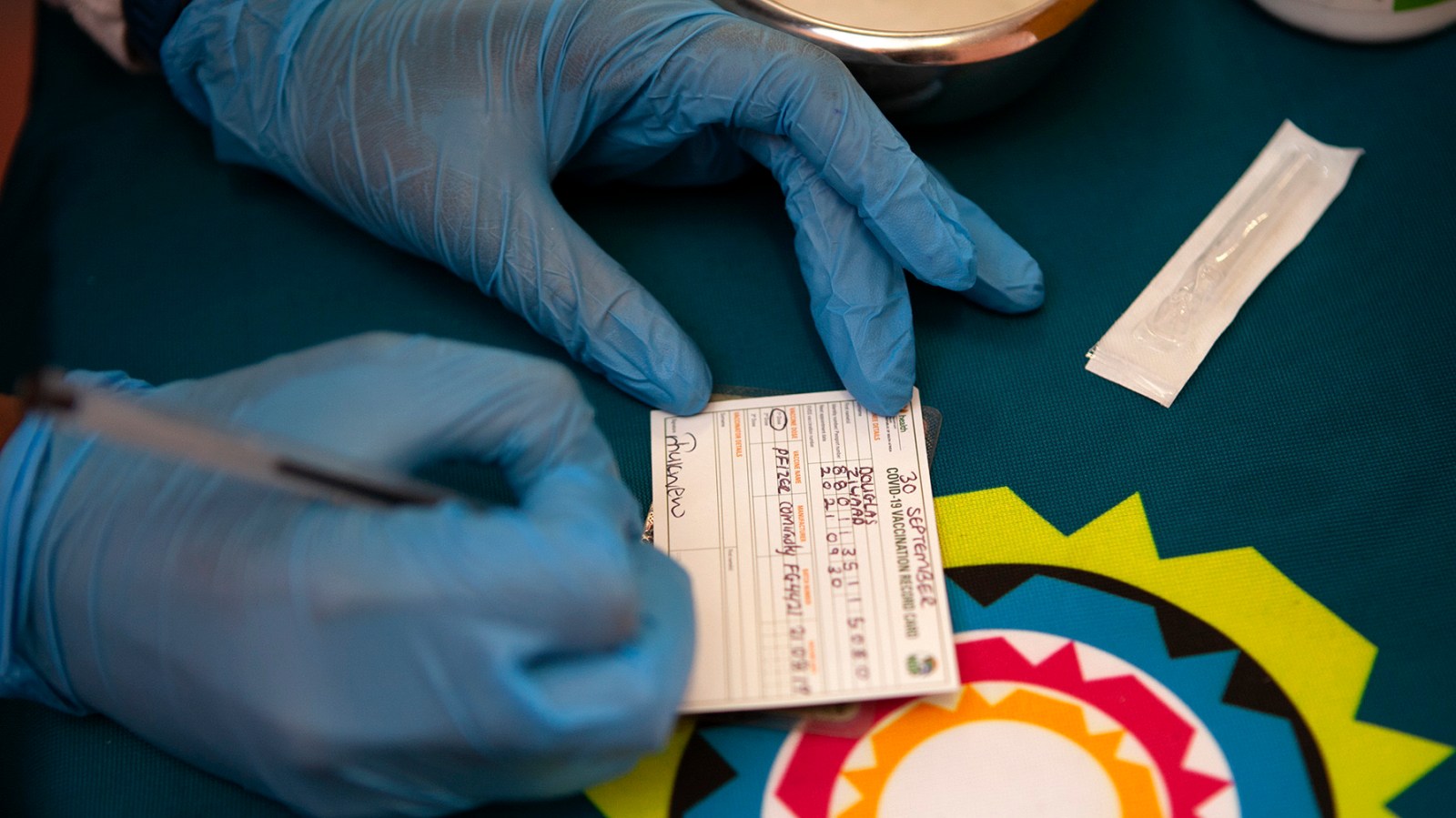 Plans to issue a digital vaccination certificate to people who have been jabbed were announced last week, but so far details have been sparse. Spotlight asked several experts for their views on what we know about the certificates so far.

Last week the Department of Health announced plans to issue digital vaccination certificates to people who have received Covid-19 jabs. While the details were sparse, Minister of Health Dr Joe Phaahla said the certificates would become available in “just over a week or so”.

But at a press conference on 17 September Phaahla said a team in the department was still working on the certificates and that an implementation plan would be presented to the National Coronavirus Command Council in the next 10 days. Other government departments, including Home Affairs, would be involved in the process since this was not an undertaking the department could do on its own.

What we know so far

At last week’s press conference Phaahla announced that the digital certificate will be in line with World Health Organization (WHO) guidelines.

The WHO issued a guideline document on 27 August outlining the implementation of digital vaccination certificates that contain an individual’s Covid-19 vaccination status, to support member states in adopting “interoperable standards for recording vaccination status”.

Phaahla said vaccinated individuals who have been captured on the EVDS system (presumably almost everyone who has been jabbed) will be given access to a digital certificate that can be downloaded on a smartphone and printed. That the certificate can be printed suggests a printable barcode or QR code solution will be made available.

Phaahla also reassured the public that the certificate will not be required to gain access to public or essential services, but may be needed to access some entertainment, sports and other events. He reiterated this point at the press conference, stressing that people will not have to show vaccination certificates when visiting government clinics or Sassa pay points.

He also explained that the government was providing a “platform” or “facility” with the certificates. It would be up to universities, employers, sporting organisations and so on to decide whether to use the platform to limit access based on vaccination status. “We will not interfere with institutions’ internal policy. The aim is not to punish anybody, but to protect each other,” Phaahla said.

Whether the certificates will be able to prove vaccination status when travelling abroad and exactly how this would work, is not yet clear.

President Cyril Ramaphosa, in an address last Sunday, also referred to these certificates. He said further information would be provided on so-called vaccine passports that can be used as evidence of vaccination “for various purposes and events”.

“The Department of Health is looking at a variety of mechanisms, like they have in other countries, to either do it electronically through a cellphone or some other form of demonstration,” he said.

Spotlight asked the department for more information. Spokesperson Foster Mohale said before the press briefing that the matter was still under discussion and that a public announcement would be made in the next week or two once all the systems were ready.

Certificate not controversial, but its use may be

Andy Gray, a senior lecturer in pharmacology at the University of KwaZulu-Natal, said he welcomed the chance to have electronic and secure documentation of vaccination that is compliant with the WHO’s standards.

Gray said the certificate itself is not controversial as it is similar to the yellow fever vaccination certificate required for some international travel, but the use of the certificate could be problematic, particularly since only a small percentage of the country has been vaccinated.

By 15 September, the Health Department’s vaccination dashboard showed only 28.16% of the adult population had received at least one Covid-19 shot.

Gray added that the certificate may be used to limit access to certain venues or activities, which could be an acceptable incentive to get vaccinated, but only once a larger proportion of the population had been vaccinated.

“It is only viable once there is a high level of access to vaccination. It can be used appropriately as an incentive (to get vaccinated)… but care must be taken to avoid it being used in a discriminatory way, especially against those denied access to vaccination,” he said.

Public health lawyer Safura Abdool Karim was also in favour of the certificate and said it was an important first step in being able to verify someone’s vaccination status in real time. She added that a digital certificate will be less vulnerable to fraudulent copies than the cardboard vaccination cards currently being issued.

According to Phaahla, “from a government perspective, [they] want to make available the certificate and make sure it has good protection and that it is reliable information derived from the EVDS”.

“It is a move in the right direction. By requiring proof of vaccination, vaccine uptake will increase and more people will be protected from serious disease and death. We can reopen our economy. It’s a win-win scenario for all. A public health ethics approach supports this development. The benefits outweigh the disadvantages.”

She cited several benefits, including improved vaccination uptake which will prevent serious illness, hospital admission and death. This, in turn, would reduce strain on the healthcare system and improve the safety of healthcare workers, as well as free up more space at healthcare facilities to treat non-Covid patients.

Public health specialist and president of the Public Health Association of South Africa, Dr Harsha Somaroo, said using a digital platform to show proof of Covid-19 vaccination was in keeping with international trends.

“However, I think that South Africa needs to have a hybrid approach to this. [For example] despite the availability of the digital option, we need to continue to issue paper vaccination certificates, as [fewer] than 50% of the population use a smartphone,” she said.

Gray said: “If the electronic format excludes some people such as those without access to a smartphone, that is a concern. It remains to be seen how the national Department of Health will manage access for those without smartphones, in particular.”

According to Moodley, the concerns about lack of access owing to the certificate being digital could be addressed by having a paper certificate with a barcode that can be scanned (similar to our ID cards).

She added that in the extremely rare event that someone was not able to be vaccinated for a medical reason, regular Covid-19 tests could be required to access indoor or high-risk venues.

Phaahla said at the Friday briefing that people would also be able to get the printout at the nearest vaccination sites that have printing facilities. “If there is no printer they will have to refer you to where you can get it printed, so it is not just for those with smartphones.”

According to Somaroo, while a digital vaccination certificate that complies with the WHO standards was proactive and likely to support more travel to and from South Africa, more information was needed.

“It would be important to understand the costs and resources involved, that it does not disadvantage anyone, and the background to how this strategy was judged to present an overall benefit for South Africans,” she said.

Somaroo added it was essential that the government issued clear guidelines around the digital certificates and how these should be used to avoid inequities or affecting the rights of people who don’t have access to a smartphone.

Karim cautioned that concerns may emerge regarding the policies implemented in relation to the certificates.

“We are going to need to think very carefully about how these certificates are used,” she said.

According to Abdool Karim, concerns could include discrimination against those of lower socioeconomic status, abuse by private actors, or use that violates human rights to an unjustifiable degree.

Russell Rensburg, director of the Rural Health Advocacy Project, told Spotlight that he thinks the digital certificates are merely an administrative issue and while a lot of people care about these certificates, it is distracting us from more important issues around the country’s Covid-19 vaccination efforts.

“I don’t want to be dismissive; I just think we should be focusing our energies on getting at least the most at-risk population fully vaccinated and our conversation does not need to get distracted from that,” he said.

Possible reasons for a lack of vaccine access were a lack of transport, not being able to wait the whole day for a vaccine, or vaccinations being administered primarily at healthcare facilities instead of community centres. DM/MC