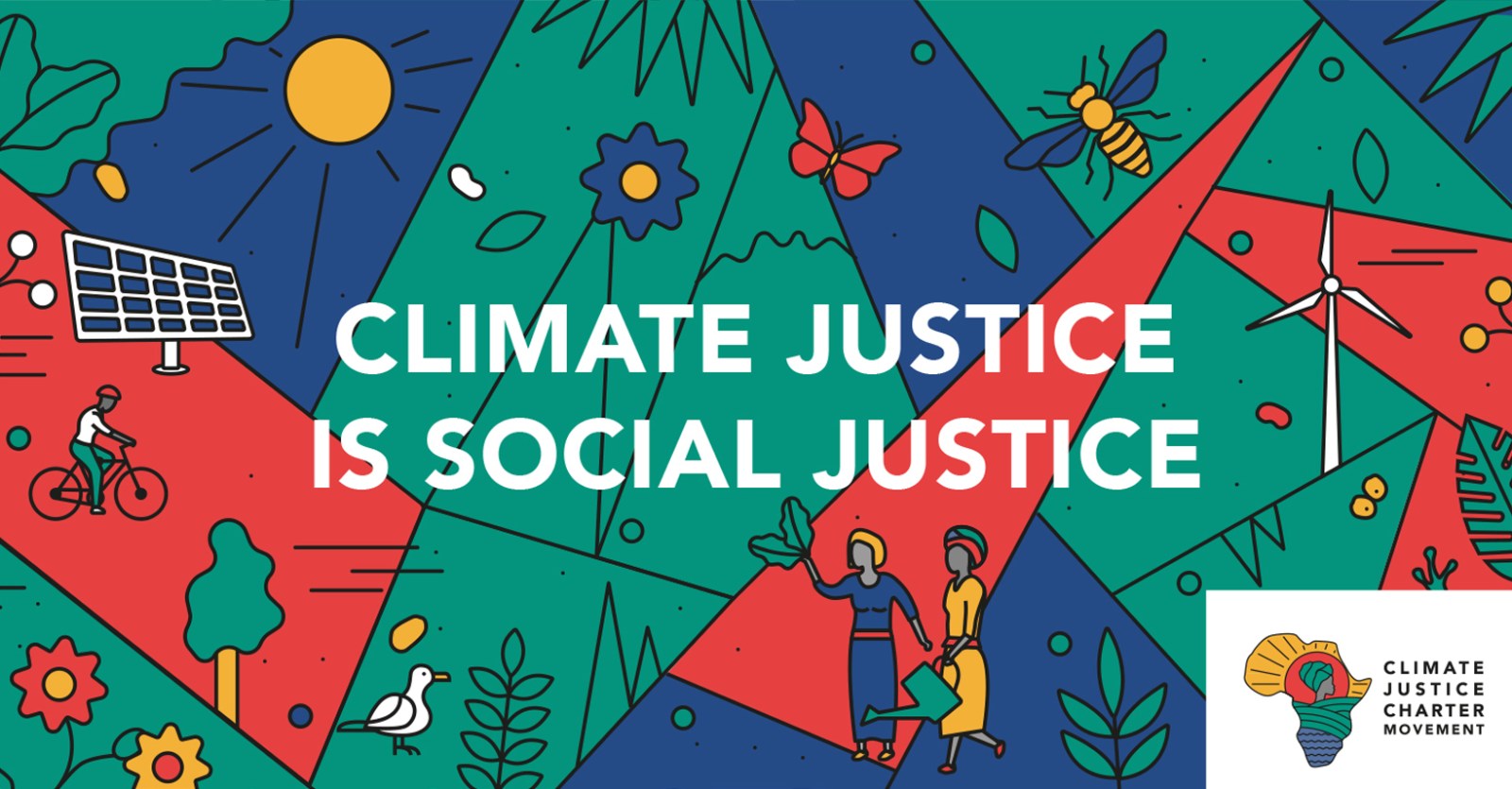 The Climate Justice Charter was launched in 2020, and has more than 200 organisations endorsing it. (Image: Supplied)

Wits students have handed over a memorandum demanding that their university adopt the Climate Justice Charter, which means divesting from fossil fuels and facilitating a just transition.

The world’s first Climate Justice Charter (CJC) was launched last year, born out of young populations’ response to the impacts of climate change and an urgent need for alternatives to address grassroot struggles.

In October 2020, on World Food Day, the founders of the CJC handed over the charter to Parliament, demanding it adopt the Climate Justice Charter as per Section 234 of the Constitution.

The handover included a climate science future document prepared by leading climate scientists and a set of demands from 72 communities calling for an end to pollution, water stress, hunger and climate harm.

Since then, the Climate Justice Charter Movement (CJCM) has gained momentum nationally, with more than 200 organisations formally endorsing the charter; however, the government is yet to respond.

The youth-led climate activism movement has also spread like wildfire in South Africa, with young people, the custodians of tomorrow, taking a stance to protect their future.

On Tuesday, during a virtual CJCM assembly, Wits students and members of the CJCM handed over the Climate Justice Charter and memorandum of demands, calling for the University of the Witwatersrand to adopt the charter as soon as possible.

The memorandum states: “South Africa needs to be placed on a democratic climate emergency footing now. Every institution (big and small), every community and workplace has to embrace the challenges of decarbonization and systemic adaptation as part of a deep just transition.”

During the handover, Dr Vishwas Satgar, a Wits professor and chair of the board of the Co-operative and Policy Alternative Centre (Copac) – one of the founders of the Climate Justice Charter Movement – said the charter, “is like an embodiment of the alternatives that our society wants for the deep just transition, for the kind of decarbonisation, for the kind of systemic adaptation to regeneration that we need”.

Nishka Pillay, a student activist and head of the environmental committee at Amnesty Wits, told Daily Maverick that Wits should adopt the charter because, “part of being an academic institution means that there is a social obligation to educate students on pressing matters such as climate change.

“In adopting the charter, Wits acknowledges that one of the demands is that climate education needs to be mainstreamed. This will exponentially aid the cause, especially in a country that very much lacks a climate-conscious media.”

Wits representative Imraan Valodia said he would pass the memorandum and charter on to the vice-chancellor and table the memo at the next senior executive team meeting, promising that the university would respond appropriately.

When making the Climate Justice Charter, the authors collaborated with climate scientists, including those from the Global Change Institute at Wits University.

“An interpretation of the recent IPCC [Intergovernmental Panel on Climate Change] report from Francois Engelbrecht is that we are facing a ‘Day Zero’ in the context of Gauteng. We are facing more extreme heat waves, we are possibly facing cyclonic impacts, and definitely a food system crisis as the climate crisis worsens.”

Awande Buthelezi, contributing author on the CJC and an organiser and researcher at Copac, makes use of the IPCC report to illustrate the urgency of the climate crisis.

Buthelezi says that the report, Code Red for Humanity, tells us that we are running out of time.

“Extreme weather is taking hold in every part of the planet,” says Buthelezi of the IPCC’s findings. “The atmosphere and seas are warming at rates unprecedented in human history, and some of the consequences are irreversible.

“Only drastic cuts in greenhouse gas emissions this decade can prevent us from raising global temperatures to a disastrous extent, the scientists have concluded.”

Buthelezi highlights how South Africa is particularly vulnerable to global warming as we, like the rest of southern Africa, are a climate hotspot.

Buthelezi explained that this is in part because the southern African interior has warmed at about twice the global average over the last five decades.

This means if the world warms by 1.5°C (which is the limit the IPCC recommends), southern Africa will warm by 3°C.

“With 3°C of global warming, the increase in multi-year droughts and heat-wave duration and frequency is projected to be so severe that it may contribute to the collapse of both the maize crop and cattle industry in large parts of southern Africa,” says Buthelezi.

The memorandum that accompanied the charter in the handover stated, “Performative policies and rhetoric do not measure up to the challenge of a country and region heating at twice the global average.

“In this decade South Africa is likely to be at 3°C when the global average overshoots 1.5°C. This will be catastrophic.”

And thus the calls for the immediate facilitation of decarbonisation and a just transition, through the adoption of the Climate Justice Charter.

Many think young people are too naive or don’t know enough about climate change to be facilitators of change.

Satgar says that a part of how the charter was born was from the emergence of the youth activist movement in South Africa, who Satgar says, “are deeply concerned and completely disillusioned with the failure of political leadership around this issue.

“These are not Greta Thunbergs. These are young people who’ve reached their own conclusions on the climate problem. And they really want to see transformative action now. And it’s their fears, it’s their dreams, it’s their desires, that also gave birth to the Climate Justice Charter.”

One of these young climate activists is Wits student Mosibudi Molokomme, chairperson of the Wits chapter of the Climate Justice Charter.

Molokomme started campaigning for a just transition when she first became aware of how the climate crisis disproportionally affects society.

She noticed that Soweto, where she grew up and where her grandmother still lives, did not have the same greenery and lush environmental aesthetic as the northern suburbs of Johannesburg.

“Along with that, I also noticed how proximate waste from abandoned mines were to the residential areas. My grandmother’s neighbourhood is laden with air pollution and is situated considerably close to environmentally degraded areas. This contributed towards me developing breathing problems when I used to live with her as a child, which alleviated once I moved to the suburbs.

“Reflecting on my childhood experience was a catalyst into becoming an advocate for intersectional environmentalism. I link the principles of social justice and ecological sustainability. Therefore, along with preserving the environment, my purpose is to protect vulnerable communities.”

Molokomme acknowledged that as a developing country, many citizens (including many young people) do not consider climate change as a priority as there are more immediate issues to deal with, such as poverty, unemployment and racism.

“However, I want to tell the youth that the social justice we hope to achieve is not mutually exclusive from climate justice,” says Molokomme.

“Taking into consideration that South Africa is a developing country, climate change exacerbates other spheres such as issues surrounding food sovereignty, water scarcity, and economic inequality – to the point that we may experience a ‘climate apartheid’ in the foreseeable future [this term was coined by Philip Alston, former UN special rapporteur on extreme poverty and human rights].” DM/OBP