The future is written: Students petition to get University of Pretoria to endorse the Climate Justice Charter 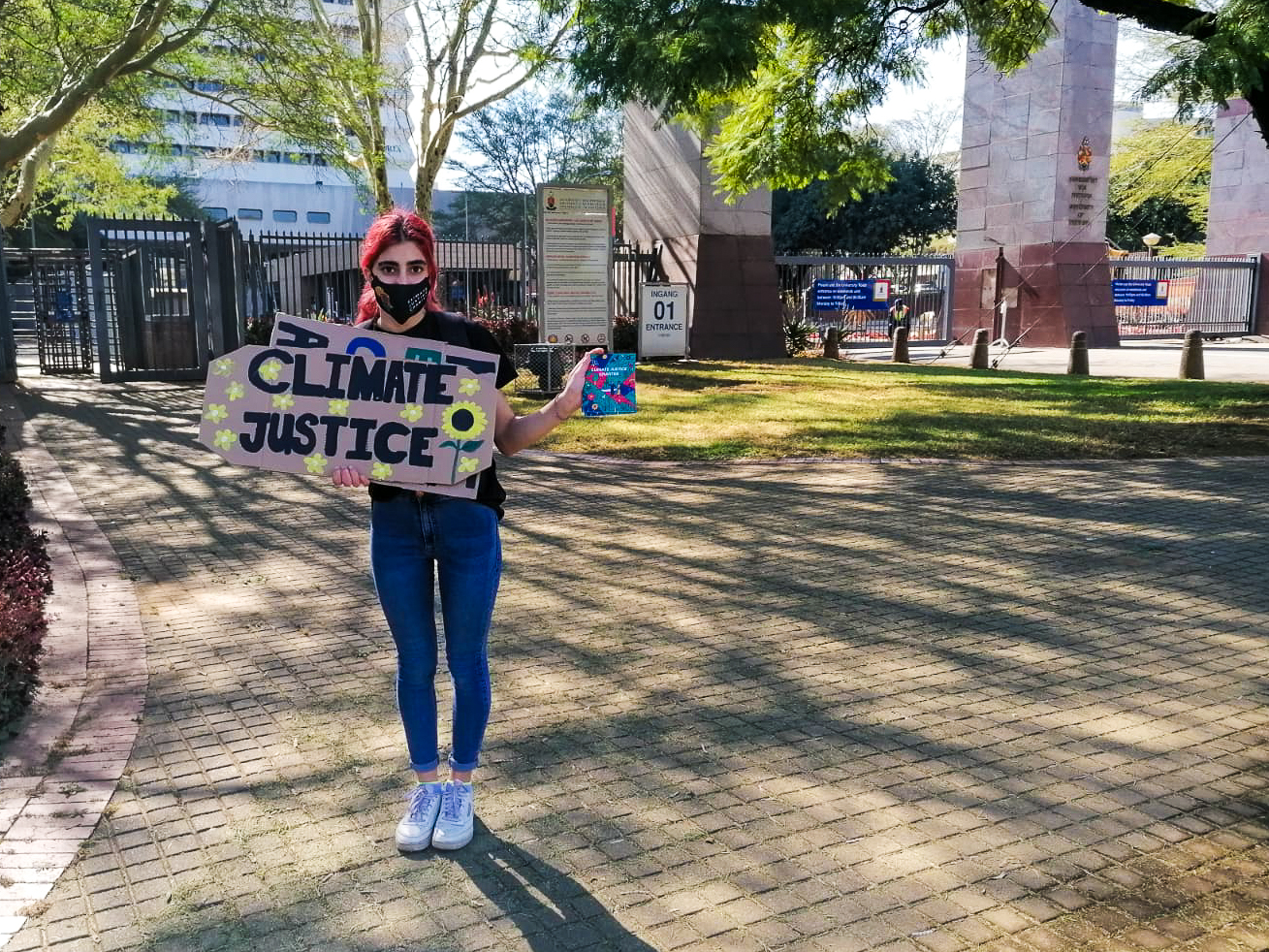 ‘Nothing is being done to ensure that [our] future exists’, says a University of Pretoria student who started an online petition to get UP to endorse the Climate Justice Charter and ultimately add to public pressure to push Parliament to adopt the charter in the Constitution.

Since then, more than 200 organisations have endorsed it, but there’s been no word from the government.

“So now there’s a nationwide campaign to try to get more and more people to adopt the charter,” says Natalie Kapsosideris, 18, a first-year University of Pretoria (UP) student who started an online petition to get the university to endorse the charter.

“I think that as a university in general, I mean, your whole purpose is to prepare your students for the future, right?” Kapsosideris told Daily Maverick. “It [the university] plays a huge role in the way the future is going to pan out.

“Knowing this, the institution cannot then not take a stand against the climate crisis.”

Awande Buthelezi, who helped collect inputs from constituency groups and edit the final version of the charter, told Daily Maverick that the purpose of the document is to unite important players in civil society and to ensure that those most affected by climate change have a voice and develop a grassroots approach to a just transition.

Buthelezi said that developing a progressive and grassroots-inspired charter was necessary to “critique the failed role of political parties in the climate crisis”, “advance generational justice” and “serve as a tool to engage government stakeholders to ensure that climate change is placed on the national agenda”, among other things.

This year has already seen young climate activists publicly demonstrate, demanding the government adopt the charter. Several non-government organisations, including the Ahmed Kathrada Foundation and high-profile groups such as SECTION27 and Equal Education, have endorsed the charter.

No South African university has endorsed the charter, but the Wits Animal, Plant & Environmental Sciences School, the Wits Physics Council and several schools, such as Roedean School for Girls, have endorsed the document.

“It is important that universities endorse the charter and take an active step in helping to play a leadership role, as institutions of higher learning, in the fight for climate justice,” says Buthelezi.

“Charters have an historical significance in our country’s history, particularly the Freedom Charter, which is the foundation of our Constitution.”

Sairusha Govindsamy, 18, a first-year UP veterinary student who with Kapsosideris started an online petition, said “the University of Pretoria, in my opinion, is quite innovative. They are open to the students and to the youth and what we think and how we think things should be done.”

Kapsosideris had a similar impression of the university: “I was very surprised when I first came here, because, you know, you hear a lot about how universities specifically act in regard to dealing with certain problems.

“But when I first came here, there was the NSFAS problem that was going on and I was very surprised, in a good way, about the way that Tuks dealt with it… they were one of the first universities to actually have a proper solution — they lowered the student debt with their own funding. And the second part was when they adopted a trans protocol.

“I thought that was just really amazing, because it was like, okay, I can see that you’re clearly prioritising the education and the lives of your students.”

However, Govindsamy said, “they haven’t made any comment or any stance or shown any support to the climate justice movement.

“And as students, we are told to work hard and study and prepare for the future. But it’s the case that nothing is really being done to ensure that that future exists.”

“If they want a future at all, they should endorse the charter,” says Kapsosideris. “And they should say that the government needs to take an active stance and actually adopt the charter in accordance with section 234 of the Constitution.”

The reasons these students want their university to endorse the charter is to raise awareness among the student body about the climate crisis, to put pressure on other universities to endorse it and ultimately to add to the public pressure that will push the government to adopt the charter so that real legislative changes can be made.

“The more major institutions we have that recognise the Climate Justice Charter and climate change as a threat to our futures, the more pressure gets placed on the government, and hopefully, we’ll end up seeing more change,” says Govindsamy.

The petition was uploaded on 21 June, but Kapsosideris said she had not heard back from the university despite emailing UP administration multiple times. When asked for comment, UP spokesperson Rikus Delport told Daily Maverick on 6 July, “the University of Pretoria has received the charter and it will be discussed at the upcoming executive committee meeting”.

Govindsamy and Kapsosideris are part of the fast-growing movement of young people who have taken it upon themselves to actively campaign and petition to combat the biggest crisis humanity faces.

Kapsosideris, who got into climate activism when it first started gaining momentum among the youth of South Africa in 2019, doesn’t really see it as a choice.

“Why am I doing climate activism? Because I think it’s the most important issue — it’s literally an existential threat to humanity, to everything.

“But I think it’s also important because the climate crisis represents everything that’s currently wrong with the way we’re living.

Govindsamy and Kapsosideris said everyone should endorse the charter.

“And if you are a human, once again, there is no reason why you shouldn’t be passionate about climate justice — about saving people’s lives, essentially.” DM/OBP

The future is written: Students petition to get University of Pretoria to endorse the Climate Justice Charter