The world needs a climate justice charter and a deep, just transition to sustain life on our burning planet 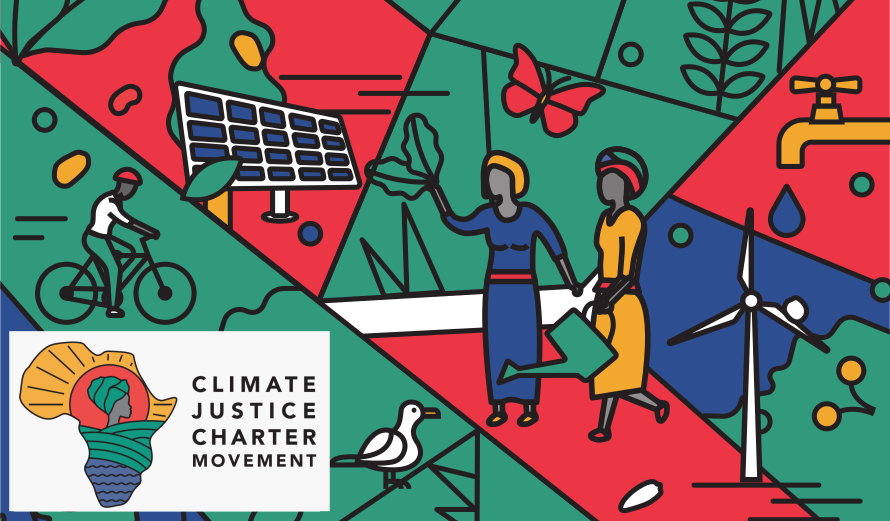 Daily Maverick’s Our Burning Planet and Maverick Citizen are partnering with the Climate Justice Charter Movement to report on issues central to our survival – the climate crisis and the people’s democratic alternatives. This is the first article of many in this series, and serves as an introduction to the charter and the various streams in the series.

On 16 October 2020, the Climate Justice Charter Movement (CJCM) handed over the world’s first climate justice charter to the Parliament of South Africa, demanding that it be adopted as per Section 234 of the Constitution.

The charter lays out people’s visions and systemic alternatives for a democratic, deep just transition for South Africa. The charter is about a different future for South Africa, Africa and the world. It calls out for a climate justice future to be built now through transforming our workplaces, communities and political power structures. It is a compass for advancing just transition plans and policies in every institution in society so that we can achieve a social tipping point for necessary socioecological restructuring that prioritises the needs of the most vulnerable and in need.

The climate crisis affects everything and everyone.

The charter is about all of us owning the problem and rallying to solve it. The rich will have to sacrifice more, while the working class, poor and excluded will also have to show leadership as we build a new society in harmony with ecosystems and the earth.

“Climate justice is social justice” is one of the slogans from the actions which preceded our engagement with Parliament on 16 October 2020, where more than 70 organisations hosted local events in their communities to raise awareness about hunger, thirst, pollution and climate harm on World Food Day.

These actions were inspiring, creative and bold, and they created awareness in local communities (amplified on social media) about these issues and the very real impacts of climate change in South Africa, on societies, and on hunger.

The CJCM partners will continue engaging communities around these issues into next year, on key national days in the run-up to 16 October 2021 (the deadline that they have given to Parliament to adopt the charter – see the memorandum handed over here).

The aim of the charter and movement is not only to engage Parliament to adopt it, but in the process to strengthen the movement and encourage civil society organisations, individuals and activists to endorse and promote the charter and join the movement. We are about leading transformation from below to displace the “lock-ins” that are driving us to extinction.

More extraction and use of oil, coal and gas, more use of carbon-based technologies and resource-intensive ways of living, more mass consumption and inaction to address historical emissions mean we are perpetuating climate injustice and are creating a perilous future. Climate science is on our side about the urgency of individual and collective action.

As a movement, the CJCM aims to create awareness in society about climate science, but also to put pressure on government and carbon criminals to make a deep just transition, while building the democratic alternatives envisioned in the charter here and now.

One key alternative mentioned in the charter is a “climate-conscious media” that informs the public adequately about climate change, takes the science of climate change more seriously, and mainstreams climate news. The Climate Justice Charter Movement has engaged the media throughout the process of developing the charter and is grateful for the consistent climate change reporting by some committed journalists and, in particular, by Daily Maverick’s Our Burning Planet and Maverick Citizen.

This forthcoming series is a collaboration with Our Burning Planet and Maverick Citizen to ensure reporting on the charter and the alternatives it proposes. This article provides a brief background to the climate justice charter process and outlines what can be expected from this series.

Building a pluri-vision for climate justice

The charter emerges out of six years of campaigning, during the worst drought in South Africa’s history, by the South African Food Sovereignty Campaign and the Cooperative and Policy Alternative Centre. It has been informed by grassroots input from water-stressed communities, the media, labour, faith-based communities, youth, climate scientists, academics, women’s organisations, environmental and social justice organisations, as well as think pieces by leading activists.

A conference held in November 2019 consolidated a draft which was placed online for public comment. A final round of public input was provided at a climate justice assembly held on 16 June 2020. The charter is the outcome of this process of dialogue and climate justice resistance. It is available in all 11 official languages and since its launch has been endorsed by more than 235 organisations, including the Nelson Mandela Foundation, Ahmed Kathrada Foundation and Gandhi Development Trust.

This series will comprise three streams of inputs for climate justice charter reporting.

Youth and children form another constituency that has participated in the climate justice charter process and brought vibrancy and urgency to the struggles. We have dedicated the second stream to their voices and their conception of systemic transformation, a deep just transition and the importance of securing climate justice futures through the charter.

We invite readers to journey with us through this series, to learn about the people’s alternatives to the climate crisis, to read about the struggles for climate justice in our communities and to hear from our youth what this all means for them. We invite you to join us as we build these alternatives now and challenge our carbon addicted institutions, corporations and government.

The world needs a climate justice charter and a deep, just transition to sustain life on our burning planet