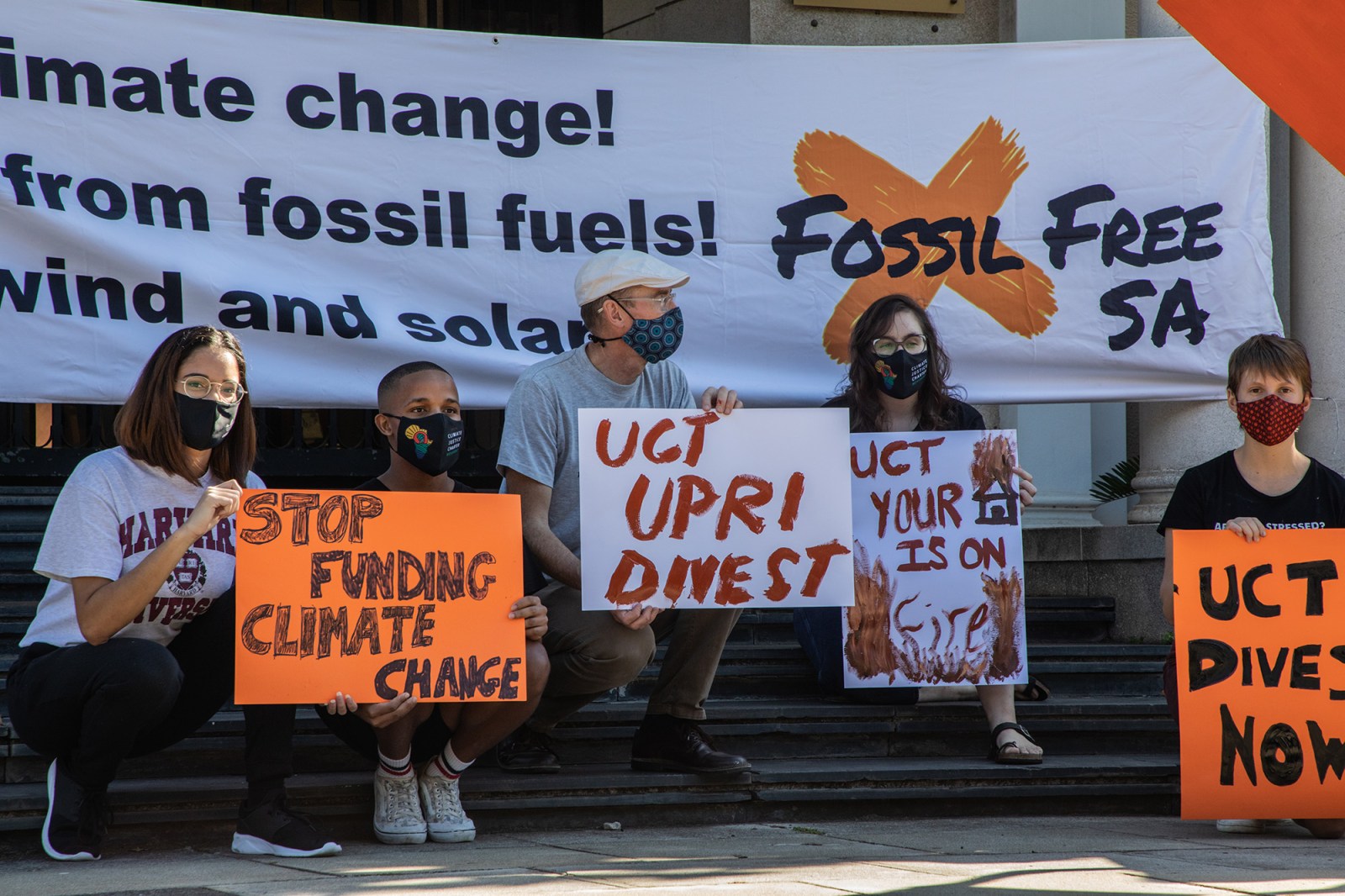 UCT students and members of the Green Campus Initiative, Fossil Free South Africa and the Climate Justice Charter Movement protest on UCT’s middle campus, calling for the university to divest from fossil fuels on Tuesday, 11 May 2021. (Photo: Victoria O’Regan)

Students and members of the Green Campus Initiative, Fossil Free South Africa and the Climate Justice Charter Movement staged a die-in on the University of Cape Town’s middle campus on Tuesday, calling for the university to divest from fossil fuels.

Cardboard signs decorated the steps of the University of Cape Town’s (UCT) Bremner building on Tuesday during a protest by UCT students and representatives of the Green Campus Initiative (GCI), Fossil Free South Africa and the Climate Justice Charter Movement (CJCM).

The placards’ creators — a group of about 20 protesters — had gathered to demand an end to the institution’s investment in fossil fuels and were calling for the University Panel on Responsible Investment (UPRI) “to make the strongest recommendations on fossil fuel divestment” to the UCT Council in September 2021.

Despite UCT’s convocation, a university body representing all alumni and academic staff, having voted in favour of divestment three times, there has been no concrete action taken by the university to steer clear of fossil fuel investment, protesters told Daily Maverick.

Divestment is something institutions can do to actively combat the climate crisis, said Fabing.

Read in Daily Maverick: Invest for the future, divest from companies that fuel the climate crisis

“At a financial level [divestment] may look quite insubstantial, but it’s at a social level, and in the changes that we’re trying to get through institutions like UCT where it becomes really important,” said Le Page.

“It doesn’t make sense for an institution like UCT, which is a centre of excellence in climate change research, to be investing in fossil fuels. It needs to change [and] it needs to be a social leader,” he said.

Investments in renewable energy account for about 1.8% of the university endowment’s total assets, added Moultrie.

At about 1.30pm on Tuesday, the protesters presented Moultrie with their memorandum and list of demands.

“We are deeply concerned by UCT’s continued investment in fossil fuels which expedite the climate change emergency and propagate a stark contradiction to the university’s core values which are to promote ‘the protection and conservation of the environment and natural resources’ and ‘the promotion of the health and wellbeing and personal safety of all members of the community’,” said the UCT divestment campaign memorandum, which Daily Maverick has seen.

The demands of the Green Campus Initiative, Fossil Free UCT campaign and the African Climate Alliance, listed in the memorandum, include:

Some protesters told Daily Maverick that they believed the university was not doing enough to break away from investing in fossil fuels.

“So, I think, the integrity of the UPRI is coming into question at this point,” said student protester Sibusiso Mazomba. The protesters are calling for an investigation into UPRI to ensure that it is an “independent and nonpartisan” advisory body, he said.

The UPRI is an advisory university committee that makes recommendations on responsible investments related to UCT’s endowment fund and was established in 2017 in response to the activism of Fossil Free UCT, but was only formally launched in April 2021.

On 22 April, the UPRI “also launched a process of consultation with the university community” asking for public engagement on UCT’s investments in fossil fuels, which closes on 14 May, said Moultrie.

Over the next two months, UPRI will formulate a recommendation to UCT’s Council and trustees on how best to deal with the matter of fossil fuel investment and climate change and the responsibility of the university regarding these issues, said Moultrie.

Although UPRI’s role is purely recommendatory, Moultrie said that the “UPRI is not seen to be a body which engages in greenwashing” and he does not want the body to be seen as a “puppet body which makes recommendations which get ignored”. DM