#IMAGINE50: Another world is imaginable and inevitable 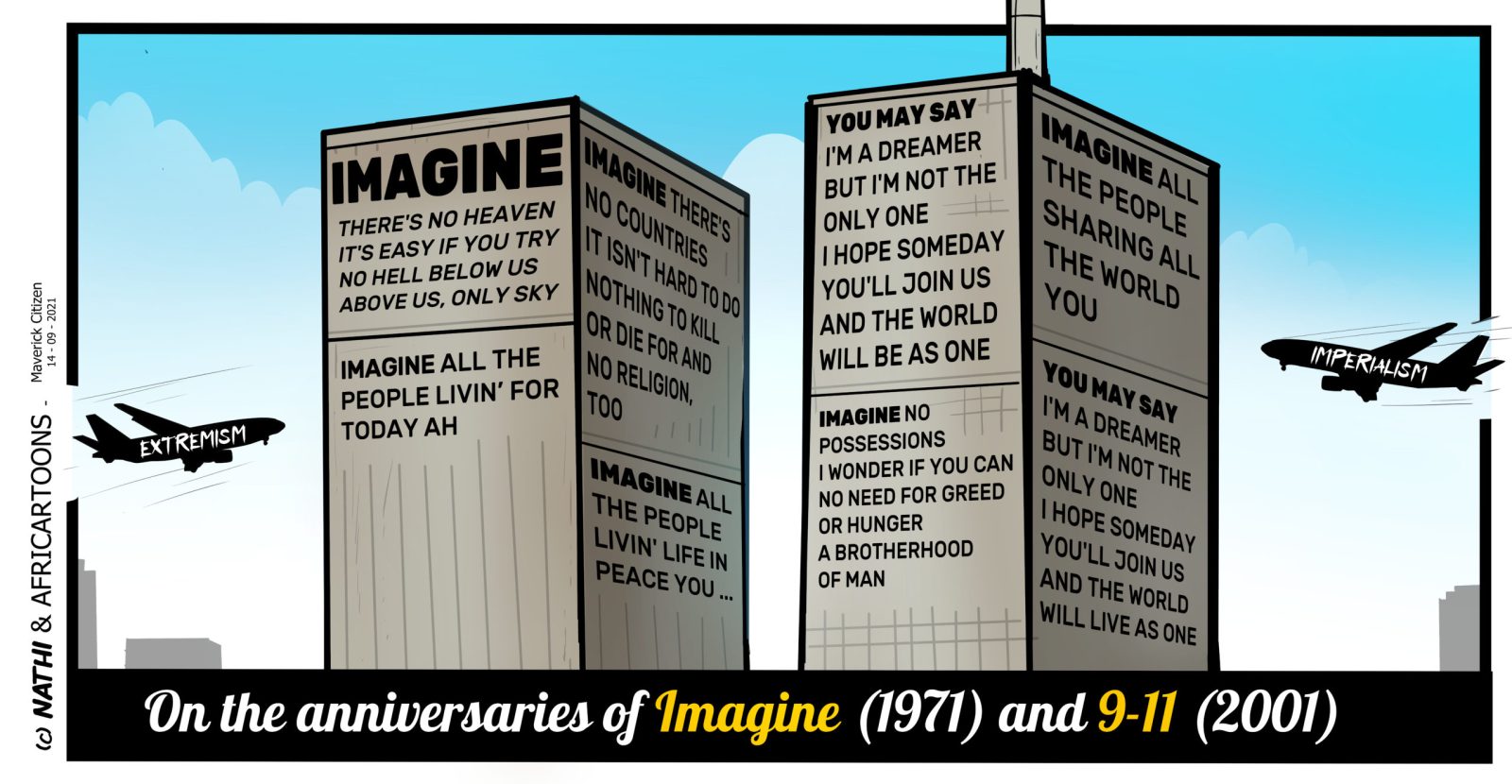 Now is indeed a crucial time to review the state of our democracy, because the choices our governments make in the next decade, particularly in mitigating climate change, will determine the future of humanity. John Lennon’s ‘Imagine’, which celebrated its 50th anniversary last week, should help us reset our compasses – if we are prepared to listen.

Last week marked two anniversaries that rather than making us reflect on times-past, should be considered to help reimagine times-present and future.

The first anniversary came on 9 September 2021. That day marked the 50th anniversary of the release of John Lennon and Yoko Ono’s anthem, Imagine. Written in 1971, Imagine has become a global anti-war cry selling more than 21 million copies, lodged in billions of memories. It has captured humanity’s imagination because of its simple elucidation of a set of values and ideals based on love, solidarity and mutuality (listen to and read about it here).

Last week it was made available in more than 100 languages (including Sesotho, Shona and Zulu) to celebrate its 50 years.

The second anniversary, 11 September 2021, marked 20 years since the terrorist attack on the World Trade Center in New York, known as 9/11. Although 9/11 took place on American soil, and symbolically targeted the centre of America’s financial power, it caused the deaths of people from more than 90 countries.

Lennon wrote Imagine at a time when the world was in transition. It is in transition again. In 1971 the Vietnam war was raging; anticolonial struggles were gaining momentum and in Europe the postwar social contract was unravelling.

Young people all over the world were in revolt.

Imagine charts a road away from hate, asking people to imagine a world with “nothing to kill or die for”. It ended with the refrain that:

“You may think I’m a dreamer,

But I’m not the only one,

I hope some day you’ll join us

And the world will be as one.”

Lennon was far from being the only one. However, much as Imagine may have taken root in our minds, it did little to change the structure or values of our politics. Despite the growing recognition of human rights in law and politics, we could not imagine a political-economy of love.

In fact the opposite; within a decade that transition had given birth to a new era of rich eat poor, celebrating individualism, unbridled consumption and accumulation, inventing excuses and blame for poverty – at enormous cost to society and the planet.

This new era bred despair and its corollary, hate. Thirty years later, 9/11 was the hate coming home to roost. But it also unleashed a new chapter of hate and wars that university think tanks have calculated directly cost an estimated 929,000 lives, destabilised the world, and mainly served the global arms industry which has benefited to the tune of between $2-trillion and $3-trillion from a futile war.

Today, as most social commentators agree, we are in a time of social transition again. This transition has been accelerated by the Covid-19 pandemic, but it will not end even if we succeed in rendering the coronavirus relatively harmless.

In a recent article in the London Financial Times, A Climate Plan for a World in Flames, the award-winning novelist Kim Stanley Robinson taunts us with the question and answer:

“What does it feel like to live on the brink of a vast historical change? It feels like now.”

Robinson’s article goes through the factors that are propelling us eyes-wide-open into an unprecedented catastrophe, but warns that unlike Afghanistan and previous wars, “we can’t just gather our diplomats and call it off, declare peace with the biosphere”.

Robinson ends by making the case for a new political economy “returning to some kind of Keynesian balance of public and private”.

“The time has come to admit that we control our economy for the common good. Crucial at all times, this realisation is especially important in our current need to dodge a mass-extinction event. The invisible hand [of the market] never picks up the cheque; therefore we must govern ourselves.”

Coincidentally, the anniversaries of Imagine and 9/11 occur the week before the International Day of Democracy, which the United Nations punts as “an opportunity to review the state of democracy in the world”.

Now is indeed a crucial time to review the state of our democracy, because the choices our governments make in the next decade, particularly in mitigating climate change, will determine the future of humanity.

In the face of 2021’s searing heat-induced fires and floods, more and more people have become aware of the scale of the climate crisis. But fewer people are aware that we will not be able to mitigate global heating successfully without simultaneously tackling the crisis of inequality and social injustice.

In fact that the climate crisis is an embodiment of the world’s wrong priorities: consumption rather than compassion.

That’s why we need to heed Lennon’s plea to reimagine.

Can we imagine a world with “nothing to kill or die for”, one where there is “no need for greed and hunger?” Or is that impossible?

But imagination and change need to start at home. If we imagined a different approach to economy and democracy in South Africa, one based on the principles we espouse in our Constitution, we would find that the barriers to the wellbeing of all are largely to do with rules we have imposed on ourselves, rather than actual material obstacles:

Of course, an army of naysayers will tell you otherwise. But it’s time that ordinary people recaptured our governments and set the terms of transition. There’s too much at stake.

Robinson asks whether it is “easier to imagine the end of the world than the end of capitalism?”

Sadly, for most people it is.

And there’s the source of our calamity.

Last week, in the course of a discussion about Imagine, a friend suggested that I use my imagination to think about how the world might look on the 100th anniversary of Imagine.

As things stand at the moment, based on a global scientific consensus described in the sixth assessment report of the Intergovernmental Panel on Climate Change, 2071 will be a very different world to 2021 or 1971. It will be a world that has overheated; where inequality has reached unimaginable extremes; when hundreds of millions of people will have died due to the climate crisis; where many more species have become extinct; where democracy, as we know it today, is firmly confined to history books.

#IMAGINE50: Another world is imaginable and inevitable