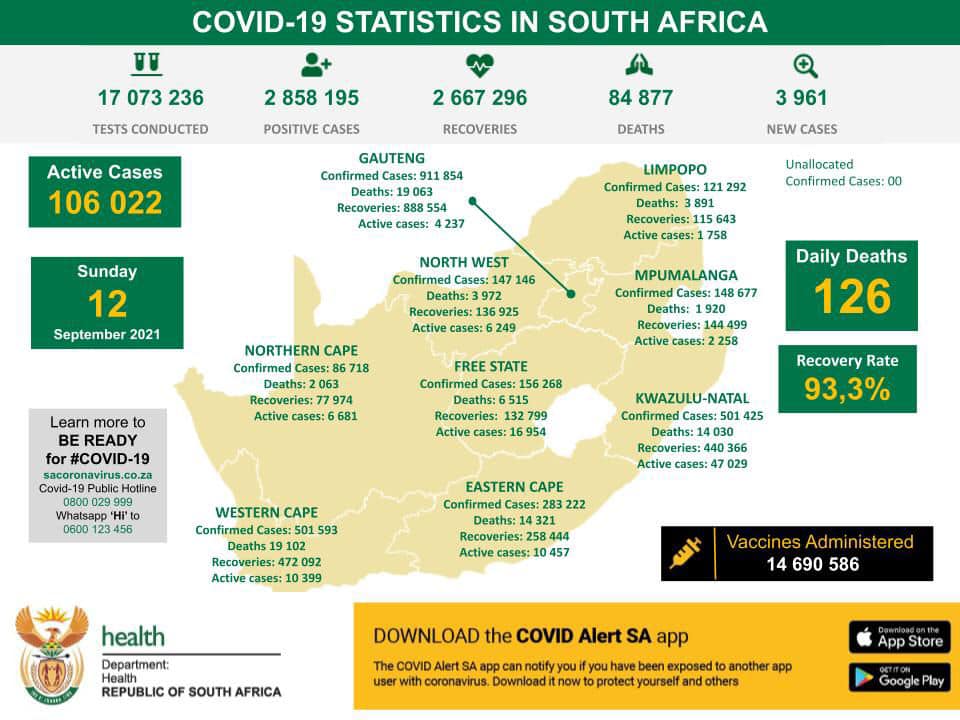 President Joe Biden will announce his next steps to boost the global vaccine supply before this year’s United Nations General Assembly begins, US Surgeon-General Vivek Murthy said. Republican governors said the vaccine mandates Biden announced last week will backfire and harden resistance to getting the shot.

The UK will abandon plans to call for proof of vaccination to enter certain venues, and may soon drop mandatory testing for returning travellers as part of a further easing of coronavirus restrictions to be announced this week.

Israel is making preparations to ensure it has sufficient vaccine supply in case a fourth round of Covid-19 shots is needed, the country’s top health official said on Sunday.

President Cyril Ramaphosa eased coronavirus lockdown restrictions in a bid to revive an economy reeling from the effects of the pandemic and a week of deadly riots.

The move to virus Alert Level 2 from Level 3 comes as Covid-19 infections drop and will allow for greater activity in an economy seen contracting in the third quarter because of the unrest.

Europe has emerged as the biggest vaccine-producing continent in the world and makes enough doses in less than a month to administer third shots to its population, EU Commissioner Thierry Breton said.

Europe “is the world’s pharmacy,” he said on Sunday in an interview on CNews. The region and the US need to do more to get vaccines to Africa, he said, in part because of the importance of heading off new viral variants.

Pfizer vaccine for kids could come by Halloween

Scott Gottlieb, a board member of Pfizer and the former head of the Food and Drug Administration (FDA), said Covid-19 vaccines for kids could arrive as soon as Halloween this year.

Pfizer has said it will have data on Covid-19 vaccines for children by the end of September, and the FDA will take “weeks, not months,” to evaluate the data and make a decision, he said on CBS’s Face the Nation on Sunday.

“In a best-case scenario, given that timeline they’ve just laid out, you could potentially have a vaccine available to children aged five to 11 by Halloween,” Gottlieb said. Parents should consult with a pediatrician to decide the number of doses and dosage for vaccinating their kids, he added.

Governor Asa Hutchinson of Arkansas, a strong proponent of the Covid-19 vaccines, said President’s Joe Biden’s announcement of federal mandates last week only “hardens the resistance” to taking the vaccine.

“This is an unprecedented assumption of federal mandate authority that really disrupts and divides the country,” the Republican governor said on NBC’s Meet the Press. “It increases the division in terms of vaccination when we should all be together trying to increase the vaccination uptake.”

Nebraska Governor Pete Ricketts, also a Republican, called the mandates “an egregious overreach of federal authority” and said that attorneys-general of several states are conferring about legal action.

“So many people told me they’re just going to be fired if they’re forced to take the vaccine,” Ricketts said on Fox News Sunday. “This is really going to create huge problems for all small businesses and for our American workers.”

Biden is weighing a multilateral meeting ahead of the UN leaders’ sessions aimed at vaccine supply, and has said he will announce new vaccine measures this month. Murthy told CNN on Sunday that the announcement will precede the UN sessions.

“The president will be making announcements ahead of the UN General Assembly about additional measures that we’re taking to help vaccinate the world,” Murthy said on CNN’s State of the Union. The session at which world leaders address the UN begins on September 21. Biden said on Thursday that he’d make the announcement, though hasn’t yet signalled what it will be.

The UK will abandon plans to call for proof of vaccination to enter certain venues, and may soon drop mandatory testing for returning travellers as part of a further easing of coronavirus restrictions to be announced this week, even as cases remain high.

Health Minister Sajid Javid spoke ahead of steps expected to be announced by Prime Minister Boris Johnson on Tuesday to managing Covid over the autumn and winter. Booster vaccines are also on the agenda.

“I’ve never liked the idea of saying to people, ‘You must show your papers’ or something to do what is just an everyday activity,” Javid said in an interview on the BBC’s Andrew Marr Show on Sunday.

Indonesia recorded 3,779 new coronavirus cases on Sunday, the fewest since May 16, according to data from the government’s Covid-19 task force. The disease has infected a total of 4.17 million people in the world’s fourth most-populous nation.

Scotland must tame virus before referendum

Scotland won’t call a new referendum on independence until the pandemic is under control, First Minister Nicola Sturgeon said.

“This is not just about safety of polling stations,” Sturgeon said in an interview with Sky News on Sunday morning.

Israel is making preparations to ensure it has sufficient vaccine supply in case a fourth round of Covid-19 shots is needed, the country’s top health official said on Sunday.

“We don’t know when it will happen; I hope very much that it won’t be within six months, like this time, and that the third dose will last for longer,” Health Ministry Director General Nachman Ash said in an interview with Radio 103FM.

Over half of Japanese fully jabbed

Japan’s Economy Minister Yasutoshi Nishimura said on Sunday that more than 50% of people have been fully vaccinated on NHK broadcaster’s weekly TV programme. He expects to surpass 60% by the end of this month, on a par with levels seen in Europe. Tokyo on Sunday reported 1,067 new daily cases of coronavirus infections, below the seven-day average of 1,384.

Merkel urges vaccinations ahead of winter

Chancellor Angela Merkel has urged Germans to get vaccinated ahead of the winter months. Four million people in Germany have contracted the virus and more than 90,000 people have died from it, she said on Sunday in her regular podcast.

This week volunteer workers will offer vaccinations on soccer fields, in the streets and at mosques, she said.

The vast majority of patients treated in hospitals or intensive care units are unvaccinated, she said. To get through the fall and winter in good shape, “we therefore have to convince more people to get vaccinated.”

The tourism-dependent nation of Mauritius plans to roll out a booster-dose vaccination campaign starting next month after taking into account recent studies and the situation prevailing in other countries, Le Dimanche/L’Hebdo reported.

An additional dose is imperative for better efficiency and protection, the report said, citing Catherine Gaud, a senior adviser at the health ministry. Vaccines used in the Indian Ocean island so far are AstraZeneca’s Covishield, Sinopharm, Covaxin, Sputnik and Johnson & Johnson.

Spread of the coronavirus slows in Germany

The spread of the coronavirus slowed in Germany on Sunday. The number of people newly infected rose by 7,345 – some 3,108 cases less than a week ago. The death toll fell to eight on Sunday, compared with 21 a week ago. The country recorded, in total, 4,077,640 Covid-19 infections.

Students in Bangladesh returned to in-person classes on Sunday after a shutdown of more than a year.

Those in higher grades will have classes five days a week, while others will return once a week, according to Education Minister Dipu Moni.

“The government will shut the schools again if the coronavirus cases surge,” she said. “But there are little chances of Covid infections going up again.”

Bangladesh on Saturday recorded 1,327 new virus cases, the fewest daily count since May, taking the tally of infections to more than 1.52 million. The death toll climbed by 48, the lowest since June, to 26,880. DM