LOCKED DOWN AND OUT

Covid-19 takes a scythe to Gauteng’s quality of life 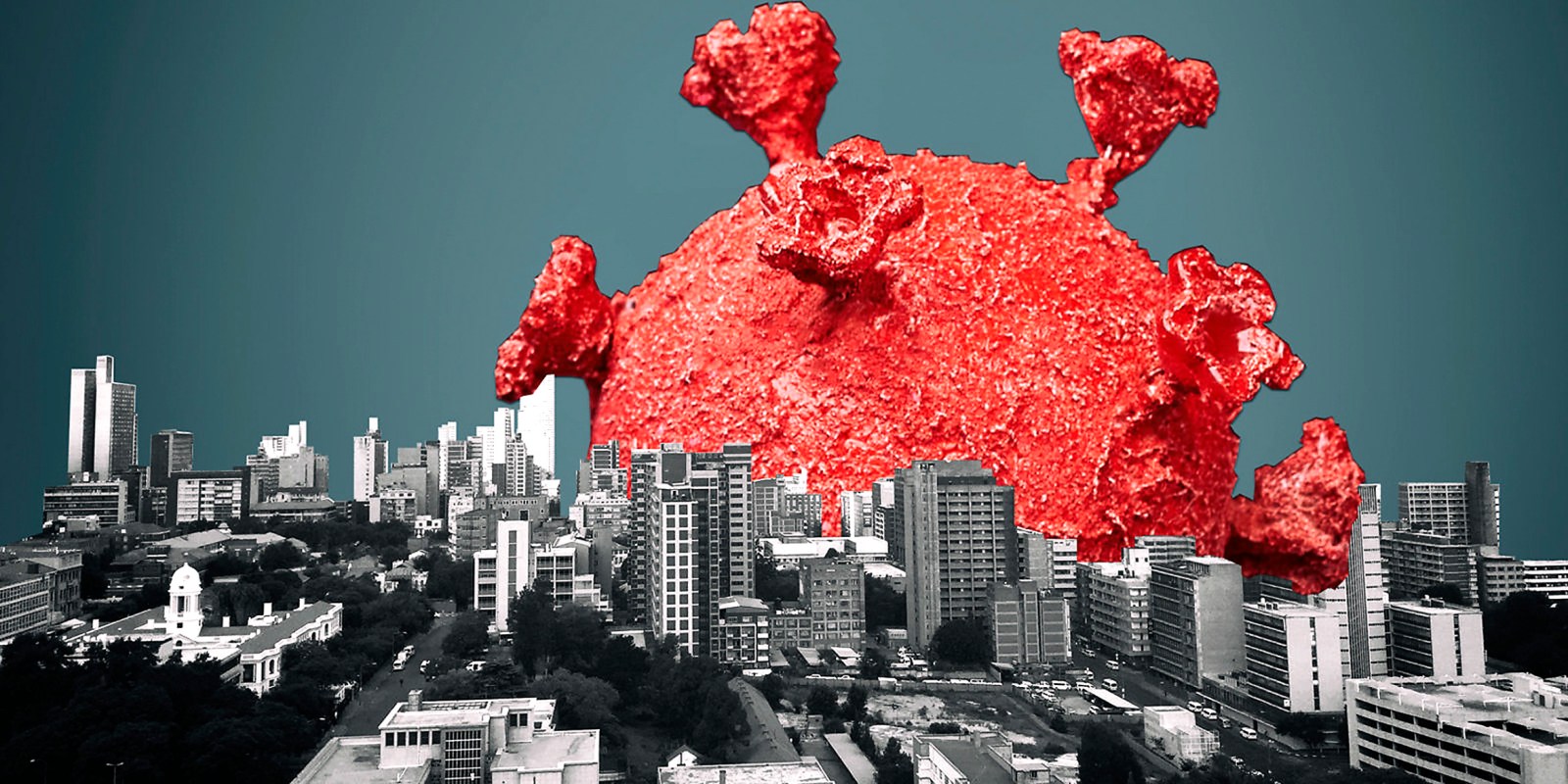 A third of Gauteng households reported that one or more household members applied for the Covid-19 Social Relief of Distress grant, with two-thirds of applying households receiving the grant, the survey found.(Illustrative image / Sources: Adobe Stock, Flickr)

The latest Gauteng Quality of Life Survey shows how the pandemic reversed a positive anti-poverty trajectory in the smallest and wealthiest province.

Covid-19 ushered in “one of the most painful periods in recent history”, says the annual Gauteng Quality of Life Survey, out on 9 September.

Gauteng is South Africa’s smallest province but with three cities in its borders it is classified as a city-region. It has an identity quite different to the other provinces. It is the wealthiest by provincial GDP and also the most populous, with a population that grows every year. The Gauteng City Region Observatory publishes a survey quite unusual in South Africa’s research landscape. It has developed a multidimensional quality of life assessment through which it asked 13,616 respondents about their life in 2020 and the first five months of 2021.

Satisfaction with life has diminished, as this chart shows. It has become more difficult to get by and the aspiration to own a home or a car or other measures of growth have been diminished. People have largely stayed at home, the survey has found, and acquiring food for the family or decent healthcare is often arduous. 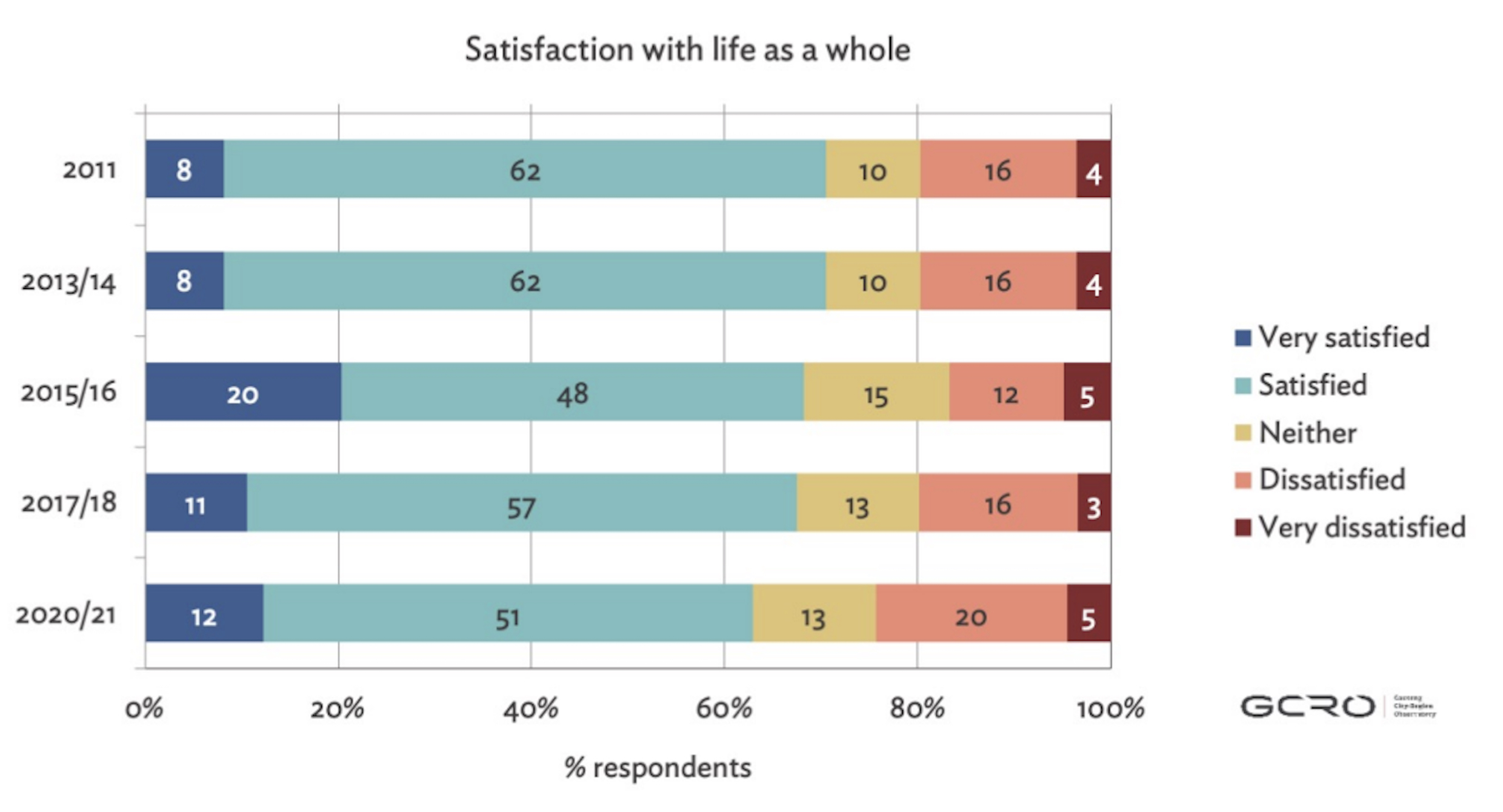 “One in five respondents had their salaries or working hours reduced since March 2020, and one in 10 respondents lost a job. However, there is also evidence that grants and social support have provided some crucial protection to the most vulnerable. A third of households reported that one or more household members applied for the Covid-19 Social Relief of Distress grant, with two-thirds of applying households receiving the grant,” the survey found. 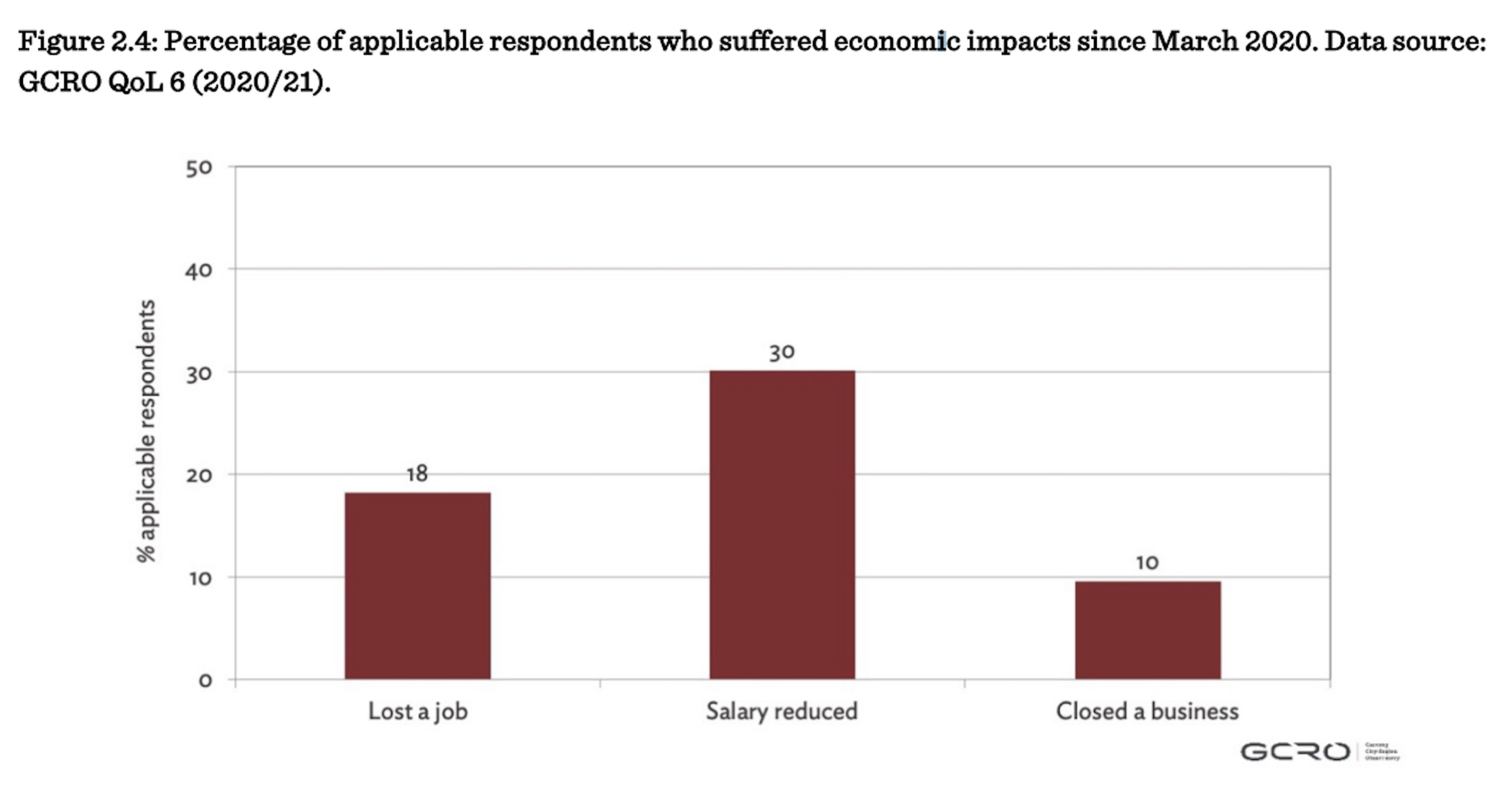 For the first time, in 2020/21, the researchers added questions about experiences of violence. The intergenerational experience of violence produced shocking finds – 65% of those surveyed had experienced physical abuse as children. The year also saw a huge jump in crime and violence, a trend mirrored in the quarterly police crime statistics. Among men aged 18 to 24 the researchers found that one in three had experienced physical trauma while one in 10 had been threatened with or hurt by a gun in the past year. The chart below shows how the surveyors measure quality of life and that safety is an important factor. 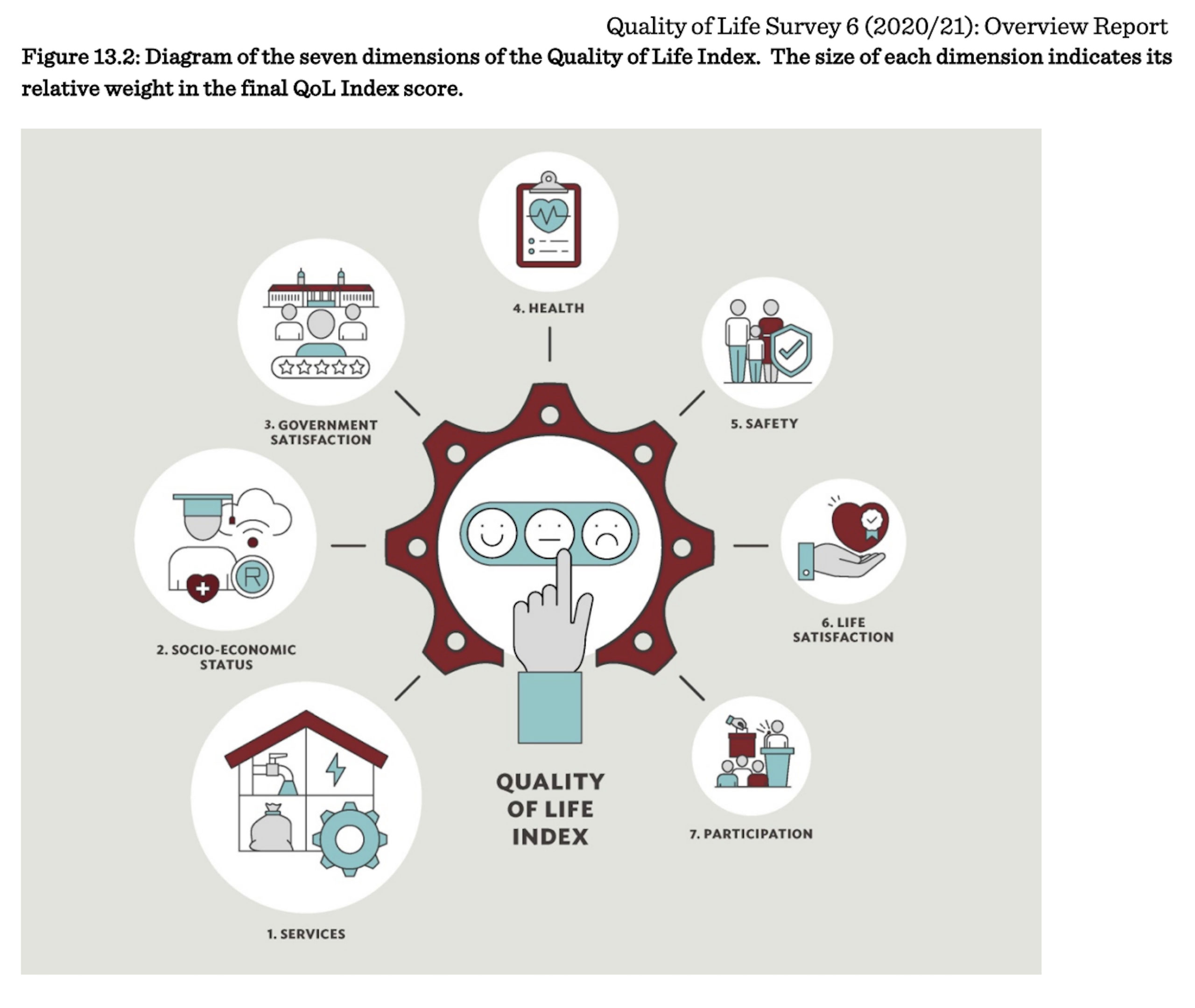 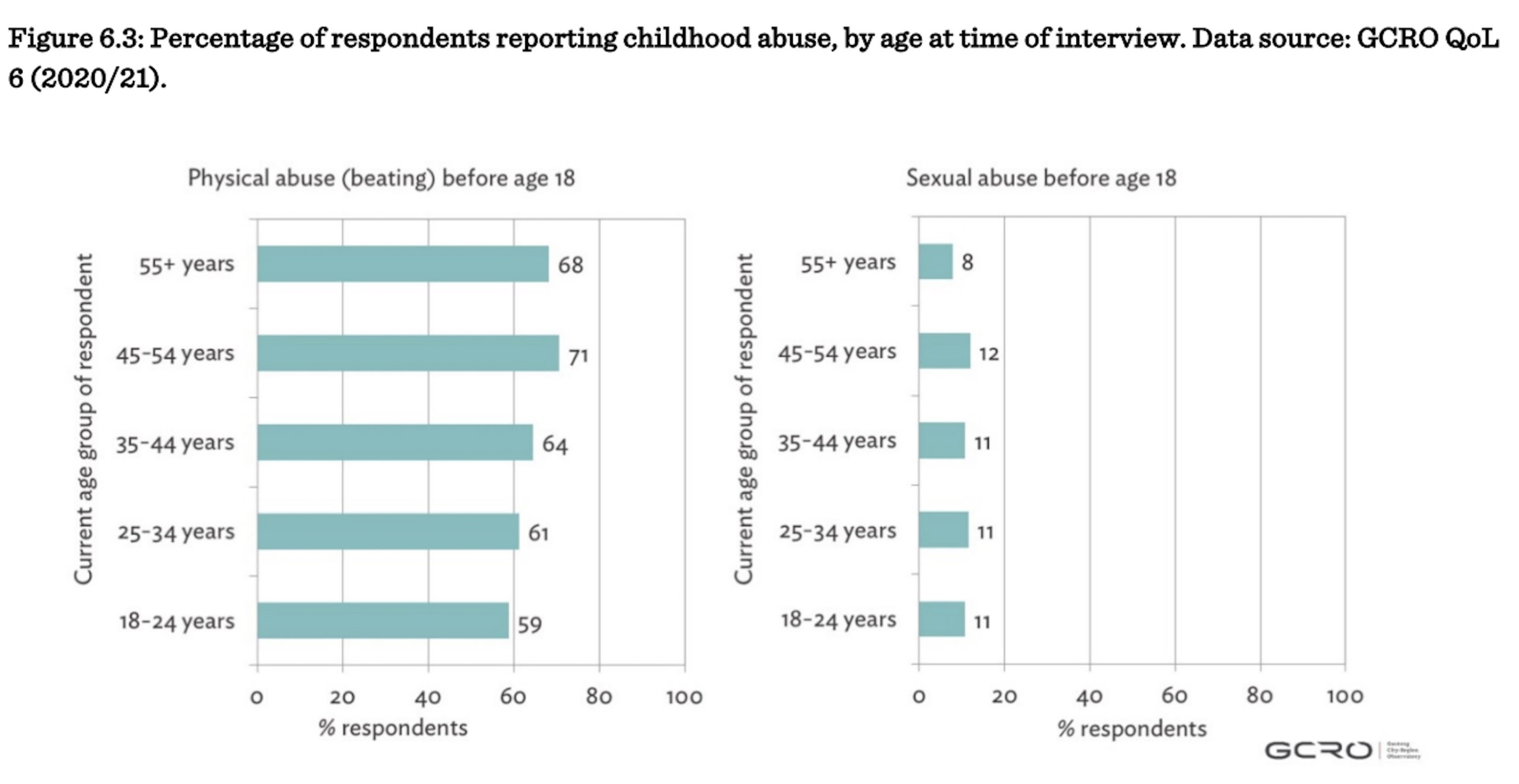 Until 2020, various policy measures were beginning to slowly turn around the trajectory of extreme poverty, although the researchers acknowledge that Gauteng has historically high levels of inequality and many social challenges.

“There were persistent concerns about safety and crime, and signs of a very violent society: crime levels were higher in our 2017/18 data than in any previous survey iteration. Nonetheless, there were some positive signs too. The provision of basic services was stable and meeting the demands of a growing population. Satisfaction with government of all levels was low but increasing,” the authors write.

The reversal on poverty eradication was fast as people lost their jobs or experienced deep salary cuts. A series of lockdowns meant sectors which thrive in Gauteng – from services to manufacturing – went to the wall.

“Our historical data shows that since 2013/14, the proportion of respondents who live below the average poverty line in Gauteng has steadily declined over time. However, in QoL 2020/21, it increased significantly, rising to 36% of respondents. Adult hunger has also increased: one in four households now report adults having skipped a meal in the last year. Food insecurity is high, affecting over half of households in Gauteng. Challenges are greatest for larger households, and Black African and Coloured population groups. Food insecurity is linked to many aspects of wellbeing, and these patterns reflect the persistence and severity of the inequalities in South African society,” say the authors.

“Covid-19 has had deep socioeconomic impacts, but these impacts vary by population group, sex and income group. In general terms, it seems that White respondents and those from higher income groups have been relatively better shielded from the negative impacts. Black Africans and the lowest income groups have been heavily impacted, although it is also clear that some social and economic support has provided a degree of protection to the most vulnerable.” 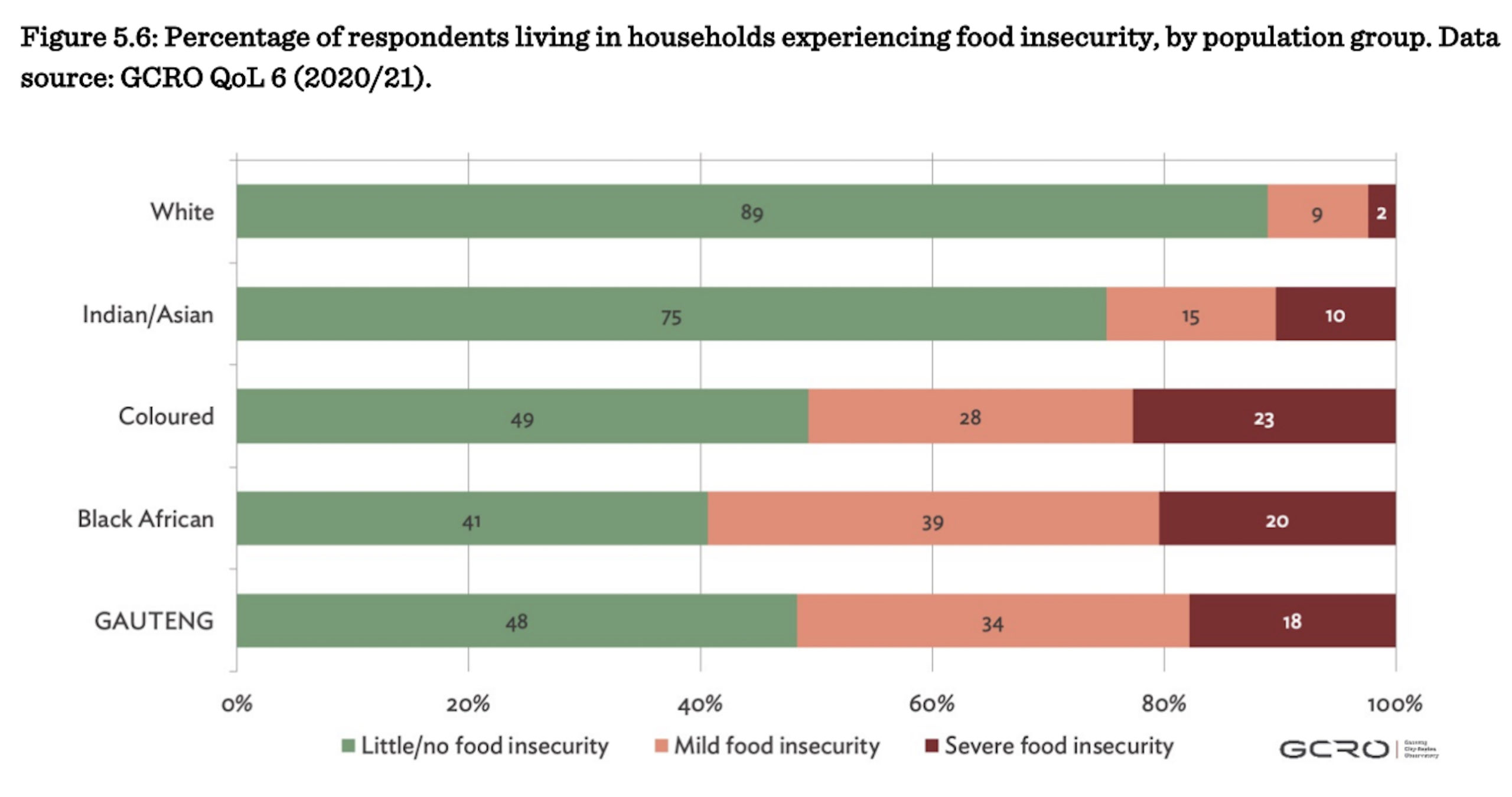 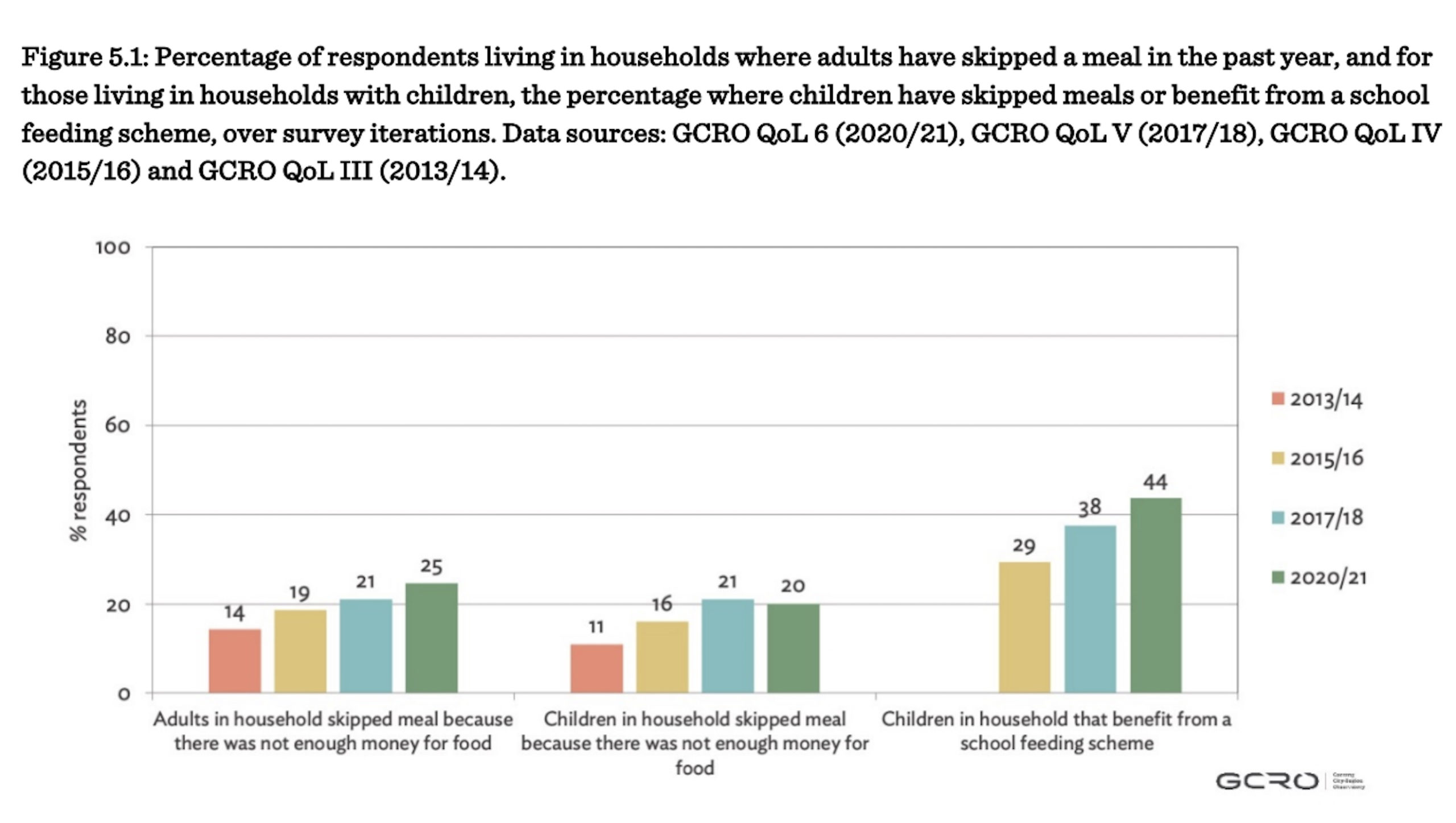 Gauteng has one of the country’s biggest middle-income segments of people who drive the powerhouse province. But the next two charts show that the pandemic has cut into the size of the middle-class in the province as household incomes have shrunk due to job losses and salary cuts. This will have national impacts on the economy as consumer spending and growth are often driven from Gauteng. Access to food, medical aid and personal computers has come down. All households reported that they had to skip a debt repayment, with the poorest segment most affected by growing indebtedness. 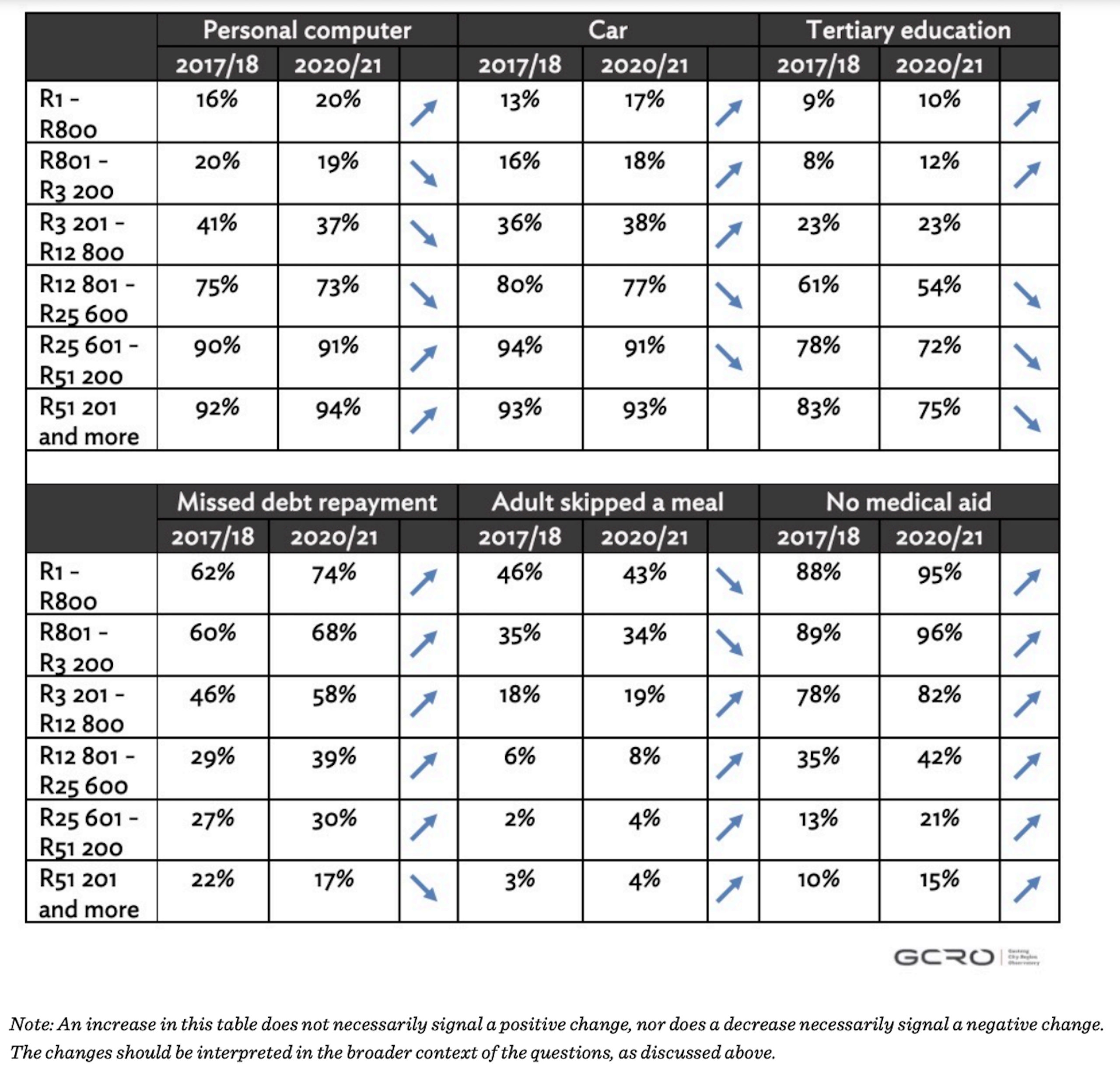 Taxis remain the main means of transport for most residents of Gauteng, but one interesting aspect that has emerged is that one in four residents use e-hailing services across all income groups. 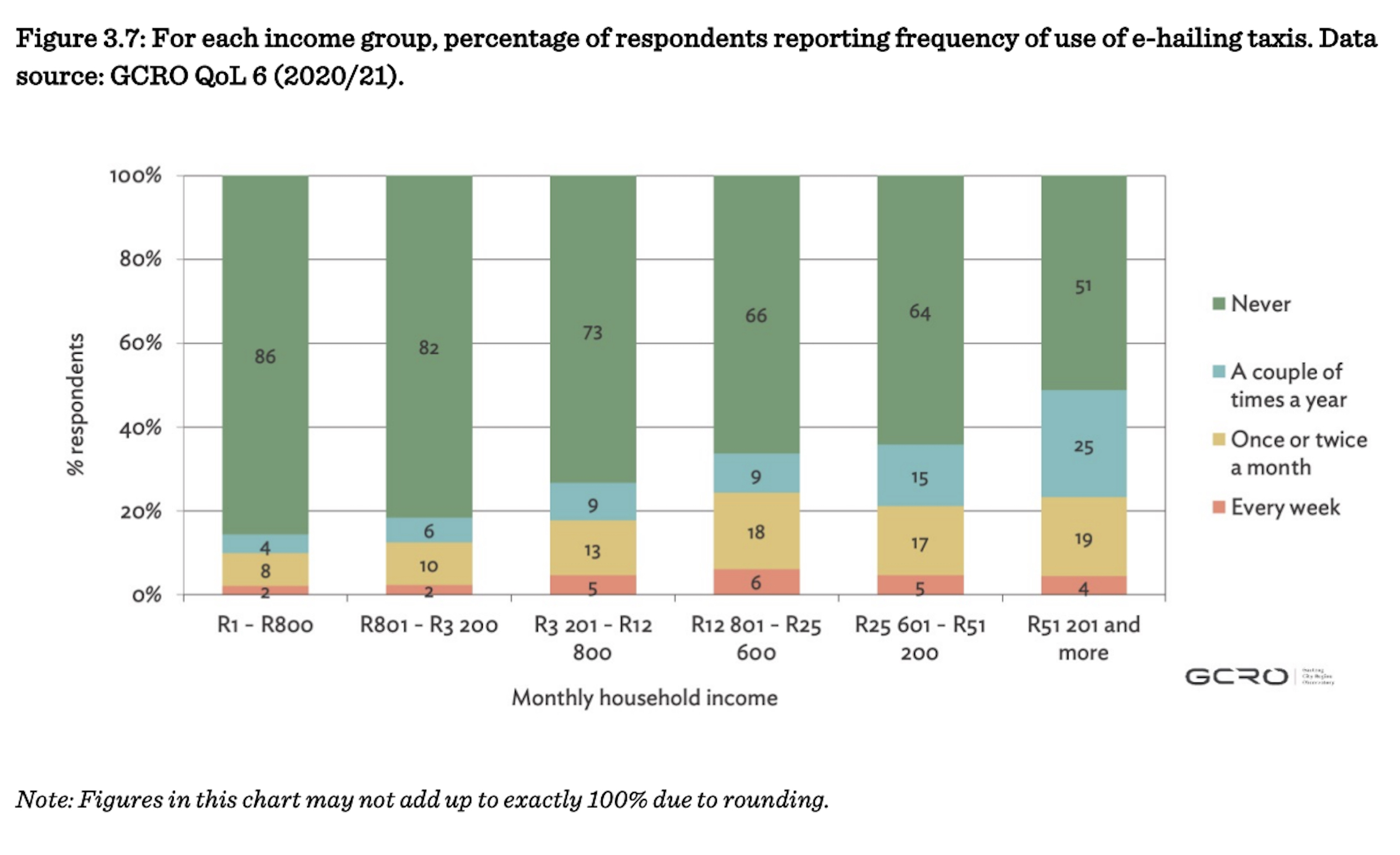 The survey also provides a snapshot of how life changed. People now travel shorter distances – the average surveyed was 15 minutes and then mostly for shopping. This is a reflection of both how jobs were lost and how the world of work changed as people began to work from home.  Compliance with non-surgical interventions was high with 92% of respondents saying their households had avoided public spaces while 89% of households added sanitisers to their shopping baskets.

There is some good news in the survey for Gauteng premier David Makhura because “two-thirds of respondents are satisfied with the way in which the government responded to the Covid-19 pandemic”, the researchers found. This is likely because of the high visibility of campaigns and the social relief grants started to respond to the extreme hardships visited on citizens in this unprecedented pandemic.

But, there is also bad news for the ANC, which runs the province, while there is good news for opposition parties contesting the local government elections in Gauteng.

“… satisfaction with all spheres of government has declined considerably since 2017/18. The proportion of respondents satisfied with national government fell from 43% to 33%, while satisfaction with provincial government fell from 44% to 29%. The proportion of respondents satisfied with local government is lowest of all, at 26%, down from an already low 29% in 2017/18,” the survey found. Unemployment and corruption (or the exposure of corruption) drove negative sentiment among citizens.

Gauteng residents use their votes to express dissatisfaction. In the 2016 election, the ANC lost control of both Johannesburg (which it won again but now runs in coalition) and Pretoria as party loyalists deserted it in droves. Those respondents who were directly affected by Covid-19 also gave the government the thumbs-down because many could not access tests easily and did not have a good experience in public health services.

These factors drove down the quality of life score for Gauteng, especially among black Africans who bore the biggest Covid-19 burdens – women also scored their own quality of life lower than men did for the first time since 2013/14. This is because, globally and in South Africa, the pandemic has been tougher on women because of higher job losses, fewer grant payments and increased care responsibilities as schools and childcare facilities closed for long periods or closed down completely.