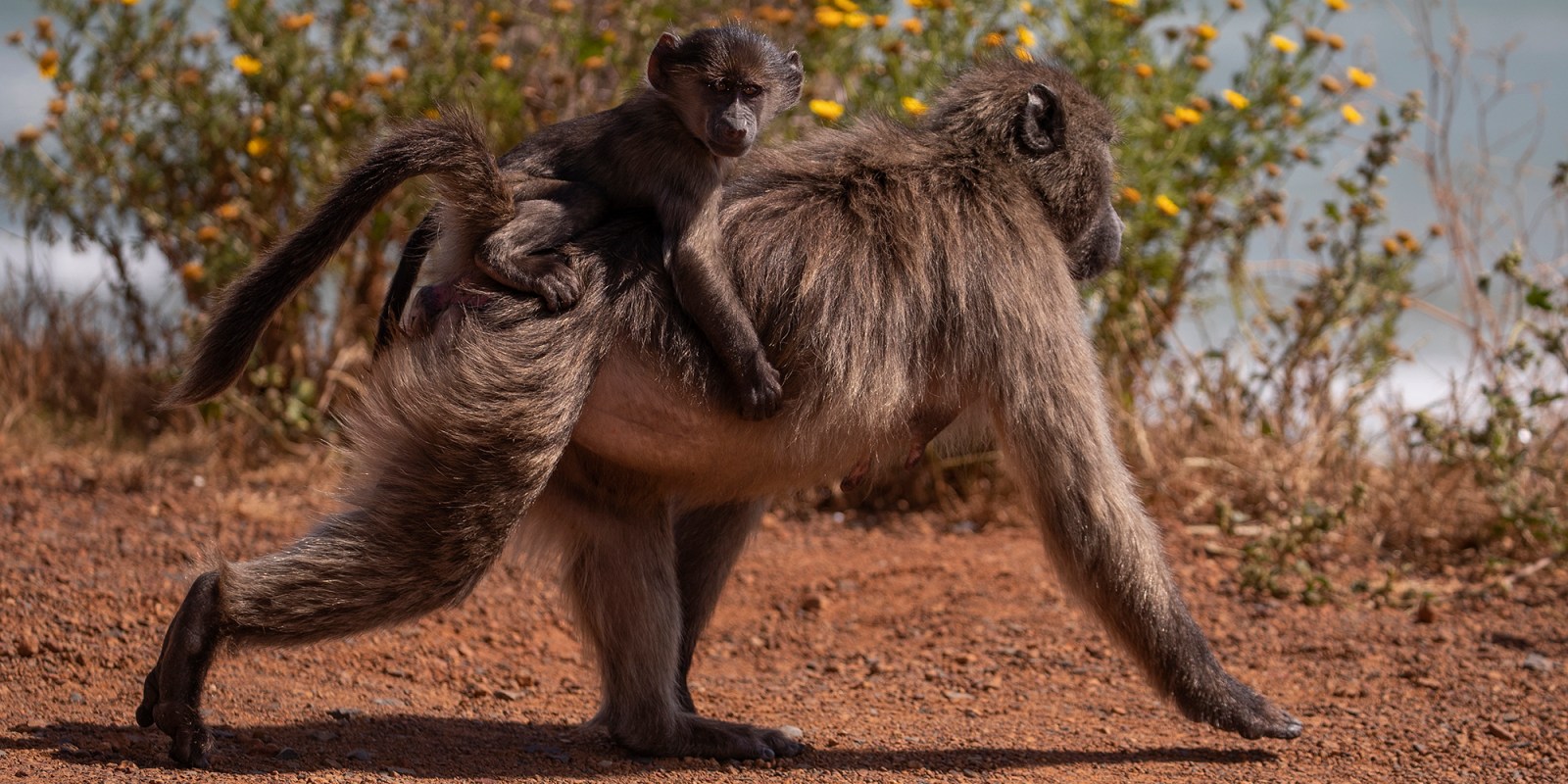 Given that female baboons with young are less likely to enter dangerous urban areas, so too are the alpha males chaperoning them. (Photo: EPA-EFE / Nic Bothma)

From a human-baboon perspective, Knysna is today where Cape Town was in the late 1990s: No management guidelines, no non-lethal interventions, no idea about how many baboons live in which troops, limited education of communities and no idea whether the main drivers of conflict are a lack of natural food or a preference for urban food sources.

Esmé Beamish has acted as consultant to the City of Cape Town’s Urban Baboon Programme on baboon behaviour over the past 15 years. She did her MSc in behavioural ecology on the Cape Peninsula baboons.

Professor M Justin O’Riain is director of the Institute for Communities and Wildlife in Africa at the University of Cape Town. He is a consultant to the City of Cape Town, CapeNature and SANParks on baboon management.

The recent advertising by the Knysna municipality for a professional hunter to kill two “alpha males” reflects a failure to deal with a problem that has been brewing for more than a decade and has now reached untenable proportions.

Like most coastal towns, Knysna’s urban edge has sprawled rapidly, transforming natural habitat into golf estates and residential areas. These developments initially displace all wildlife, but as gardens and associated permanent water sources are established, mobile and adaptable species such as baboons, vervets and various birds return to and exploit these lush habitats.

When baboons initially explore urban environments, they do so with caution and can be deterred by gesticulating and walking towards them with confidence. Baboons are intelligent and adaptable and quickly identify new foraging opportunities. Prevention is therefore better than any cure, but few communities are cohesive in their vigilance or aware of the long-term consequences to both themselves and baboons to proactively keep the baboons wild and wary.

Once baboons have discovered the rich pickings in our bins, gardens and houses and well-meaning but ill-informed residents have befriended and even fed them, the scene is set for a disruptive conflict between neighbours, the authorities and other stakeholders on how to resolve this problem.

From a human-baboon perspective, Knysna is today where Cape Town was in the late 90s: No management guidelines, no non-lethal interventions, no idea about how many baboons live in which troops, limited education of communities and no idea whether the main drivers of conflict are a lack of natural food or a preference for urban food sources.

This lack of knowledge and absence of conflict-mitigating interventions means that any calls for killing baboons in Knysna should be rejected.

But the suggestion that in calling for a professional hunter to kill two “alpha males”, Knysna would be following in the footsteps of the City of Cape Town’s Urban Baboon Programme (CCT-UBP), should equally be rejected.

The City of Cape Town has devised guidelines for the management of baboons on the urban edge. These guidelines were developed in consultation with members of the public, welfare organisations, local and international scientists and provincial and national authorities.

It is precisely because of the existence of these guidelines that any mayor of Cape Town would not be allowed to advertise for a professional hunter to kill these males. The reasons for this are as follows:

First, and importantly, there has been no attempt to prevent the baboons from entering urban areas using humane and scientifically evaluated non-lethal methods. These include trained field rangers and baboon-proof fences, which seek to prevent spatial overlap between baboons and urban areas. Both of these have been successful in significantly reducing the amount of time baboons spend in urban areas — to the benefit of baboons and people.

Second, the guidelines demand that efforts have been made to remove point source attractants such as waste, compost pits and fruiting trees on both municipal and private land (within the limitations of the law). Baboon-proof bins were introduced in Cape Town more than a decade ago with varying levels of success and improvement of the design is ongoing. Private property owners are instructed in what attracts baboons to their property and then advised on how to reduce those attractants.

Third, there are no case histories for these males providing evidence of their identity, social status and behaviour in an urban context. The public is quick to label any adult male as an “alpha” but this is an exclusive title reserved for the most dominant male in each troop.

Alpha males are vested in protecting their troop females and what they hope are their infants. Given that females with young are less likely to enter dangerous urban areas, so too are the alpha males chaperoning them. Rather it is the adventurous young potential dispersers and the older males who have lost alpha status that are more likely to be peripheral to the troop and enter urban areas on their own.

The public is also quick to come up with a name for any large male that frequents urban areas and ascribe all negative interactions to this one name irrespective of whether it is the same or another similar-sized male. Globally, few wildlife species causing damage in urban areas are managed as individuals and consequently when a threatening event occurs authorities are quick to blame the next available member of that species which, more often than not, will be the wrong individual.

All of these steps and interventions come with a significant price tag which is funded by ratepayers’ contributions to the municipality and competes for budget with road repairs, waste removal, sewage treatment and the provisioning of water and electricity to the poorest people.

Whether Knysna’s public will support its politicians in adopting a costly non-lethal programme that demands education and baboon-proofing remains to be seen.

What is certain is that equating Knysna’s call for a professional hunter to shoot two unknown large males of unknown social status for unknown damages and without any effort to prevent those damages from happening, with how baboons are managed in Cape Town, is not only dishonest, but disingenuous for it discourages the municipality from adopting a non-lethal approach that has been successful in reducing urban baboon-human conflict.

Knysna needs to travel a long road towards improving its approach to the human-baboon interface and it can learn many lessons from Cape Town’s successes and failures on how to ensure that baboons in its area can persist as neighbours.

It will learn too that irrespective of how well it succeeds at devising a coexistence plan for the benefit of people and primates, that as long as there is the option for a lethal decision, the animal rights groups will always consider its programme a failure. DM/OBP