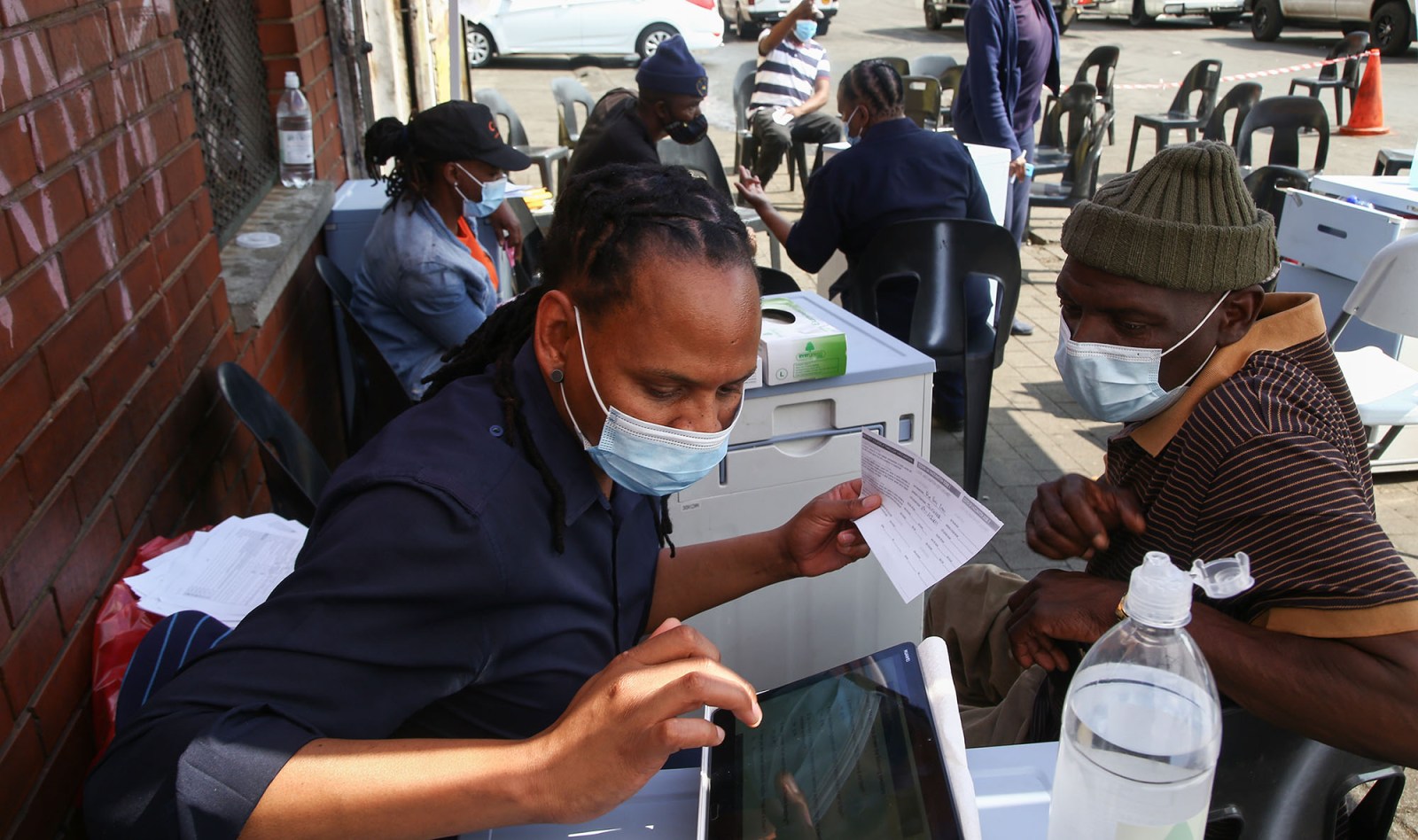 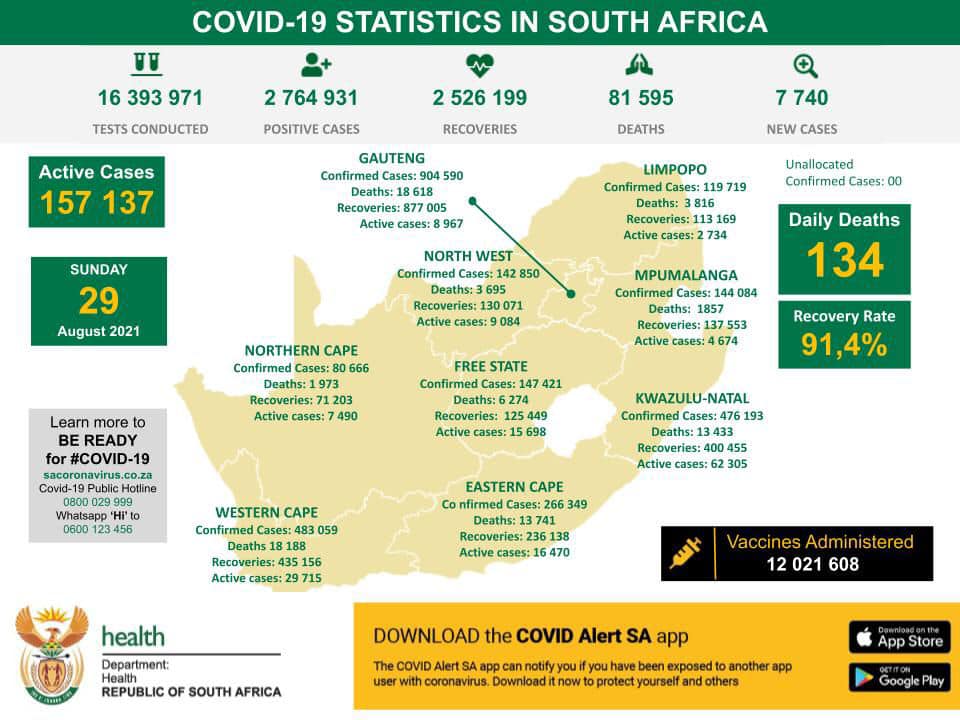 US public health advisers meet on Monday to discuss Covid-19 vaccine booster shots, with the White House eager to start a nationwide roll-out by September 20. Anthony Fauci said health officials have a working schedule of eight months from full vaccination, though he left the door open to a quicker pace that President Joe Biden has raised.

Hurricane Ida comes at a difficult moment for Louisiana, with the hospitals “being so full of Covid patients,” Governor John Bel Edwards said.

Protests against pandemic restrictions resumed in Berlin as a German state considered banning the unvaccinated from restaurants and concerts. Scotland reported record cases. A senior Chinese official rejected a US report accusing China of stonewalling investigation into the virus’s origins.

Scotland reported a record 7,113 new cases on Sunday, only days after First Minister Nicola Sturgeon warned that restrictions on movement and social interaction could be reimposed if infections don’t drop.

Cases have soared since most restrictions were lifted on August 9 and Scottish pupils returned to school. At the start of the month new cases were averaging less than 1,000 a day. The latest Scottish numbers don’t bode well for the rest of the UK, with the bulk of school pupils in England preparing to return early next month.

Hurricane Ida comes at a difficult moment for Louisiana, with the hospitals “being so full of Covid patients,” Governor John Bel Edwards said on CNN’s State of the Union on Sunday.

“We’ve got about 20,450 patients now and that’s an addition to all the other patients who are in the hospitals as well,” Edwards said. “This is going to be a big challenge for us.”

Edwards had earlier said evacuation of hospitals in threatened areas is impractical because there’s no place to bring the Covid-19 patients to.

Anthony Fauci said the door is open to administering booster shots in the US sooner than eight months after a completed Covid-19 vaccination, a possibility President Joe Biden has raised.

“We’re still planning on eight months. That was the calculation we made,” Fauci, Joe Biden’s chief medical adviser, said on NBC’s Meet the Press on Sunday. However, “we’re totally open to any variation in that based on the data”, he added.

Fauci also said he favours requiring shots for schoolchildren as “a good idea” for the US, where only people 12 years and older are eligible for vaccination.

US public health advisers are moving slowly toward considering the nationwide plan for booster doses of Covid-19 vaccines to ward off the fast-spreading Delta variant, even as the Biden administration seeks a September 20 kickoff.

While the booster plan laid out earlier this month had targeted individuals who received their last shot at least eight months ago, President Joe Biden said on Friday that Americans may get their added vaccinations even faster – just five months after finishing their standard immunisation. The White House quickly clarified its stance, saying that the plan hasn’t changed, but Biden’s interest in a rapid roll-out is clear.

Israel to expand booster to age 12 and above

Israel Health Ministry told health-service providers to prepare to expand the coronavirus-vaccine booster drive to everyone from the age of 12 and above, beginning on Monday, Channel 13 reports. Israel began a booster drive this month with 60-year-olds and above and has gradually lowered the minimum age to 30

A senior Chinese health official rejected a US report accusing China of stonewalling an investigation into the origins of the coronavirus. China opposes the politicisation of tracing the origins of the virus or using the subject as a tool to shift blame, according to Zeng Yixin, vice-head of National Health Commission.

The US should treat origins tracing as a “scientific matter” and support scientists in various countries who are seeking answers on how the virus started, Zeng said in a statement posted on the commission’s WeChat account. He reiterated that the Chinese government fully supports virus-tracing work based on open, transparent, scientific and cooperative principles.

India’s aviation regulator said the suspension of scheduled commercial passenger flights in and out of the country will be extended until the end of September due to the coronavirus pandemic.

The ban will not be applicable to international all-cargo flights and those approved by the regulator, the Directorate General of Civil Aviation said on Sunday.

Abu Dhabi has made booster doses mandatory for people who were inoculated with the Sinopharm vaccine.

Abu Dhabi’s media office didn’t say if the requirements would apply to the six other emirates, including Dubai, that make up the UAE. Abu Dhabi currently restricts access to some public spaces to people who have been fully vaccinated, and those who fail to get booster shots by September 20 will no longer be able to enter these places.

The city-state’s health minister announced earlier in the day that the country had fully vaccinated 80% of its population against the virus. The government had previously linked that threshold to further easing of restrictions. Senior officials have pegged the milestone to its cautious strategy, pledging to use the high inoculation rate to gradually have more economic and social activities, as well as quarantine-free travel.

Russia reported 19,286 new cases of Covid-19 in a day, the lowest in the past five days, according to the government’s virus response centre. Total cases have reached 6.88 million. The country has recorded more than 790 deaths in each of the past six days, with the seven-day average hitting a high of 799.

As children return to schools next week, officials in Moscow plan to hold in-person classes. More than 80% of city teachers are vaccinated, Tass news service reported on Sunday, citing the capital’s mayor, Sergei Sobyanin, in a TV interview.

The German state of Baden-Wuerttemberg is considering banning unvaccinated people from restaurants and concerts as pressure grows on authorities to act, according to a report in the Bild am Sonntag newspaper.

Infections have been rising steadily in recent weeks, but authorities have vowed not to reimpose widespread lockdown restrictions. Instead they are looking to target unvaccinated people to encourage more Germans to get Covid-19 shots.

Immunisations have levelled off with some 60% of the population fully inoculated. On Sunday, infections rose to 74.1 per 100,000 people over the past seven days, the highest level since mid-May.

On Sunday, protests against pandemic restrictions continued in Berlin. On Saturday, more than 100 people were detained, according to Tagesspiegel.

Tokyo cases appear to have peaked

Tokyo reported 3,081 new coronavirus cases on Sunday. The seven-day average of 3,784 is down 20% from a week ago, an indication new infections appear to have peaked amid the country’s worst wave of Covid cases. Serious cases in Tokyo fell by one to 296, a sign that Japan’s medical system may still remain under pressure. A majority of the new cases are among those in their 20s and 30s, most of whom have yet to be vaccinated.

The NDB is concerned about attacks from jihadist groups, the newspaper reported. So far, there are no tangible indications of planned attacks, according to the NDB.

Japan could mix AstraZeneca’s shots with those developed by other companies in order to speed up its vaccination effort, according to the minister in charge of the country’s roll-out.

The idea would be to combine the dose with one from Pfizer and BioNTech or Moderna, Taro Kono said Sunday on a Fuji TV news programme. Since AstraZeneca recommends eight weeks between its two shots, it’s likely that time could be shortened if combined, Kono added.

Studies on mixing Covid vaccines so far show that it could result in an equal if not stronger immune response.

New Zealand had 83 new cases of Covid-19 in the community, bringing the total number during the current outbreak to 511. Of the latest infections, all were in Auckland except for one in Wellington.

Prime Minister Jacinda Ardern on Friday extended a nationwide lockdown to midnight on August 31. Less than a quarter of New Zealand’s population over the age of 12 is fully vaccinated.

Sydney had a record number of Covid-19 infections, accounting for the bulk of cases in New South Wales as Australia’s most populous state battles to contain the spread of the highly infectious Delta variant.

Meanwhile, Victoria state will extend its sixth lockdown past Thursday, Premier Daniel Andrews said without giving details on how long the restrictions will last. The state recorded 92 new cases. DM