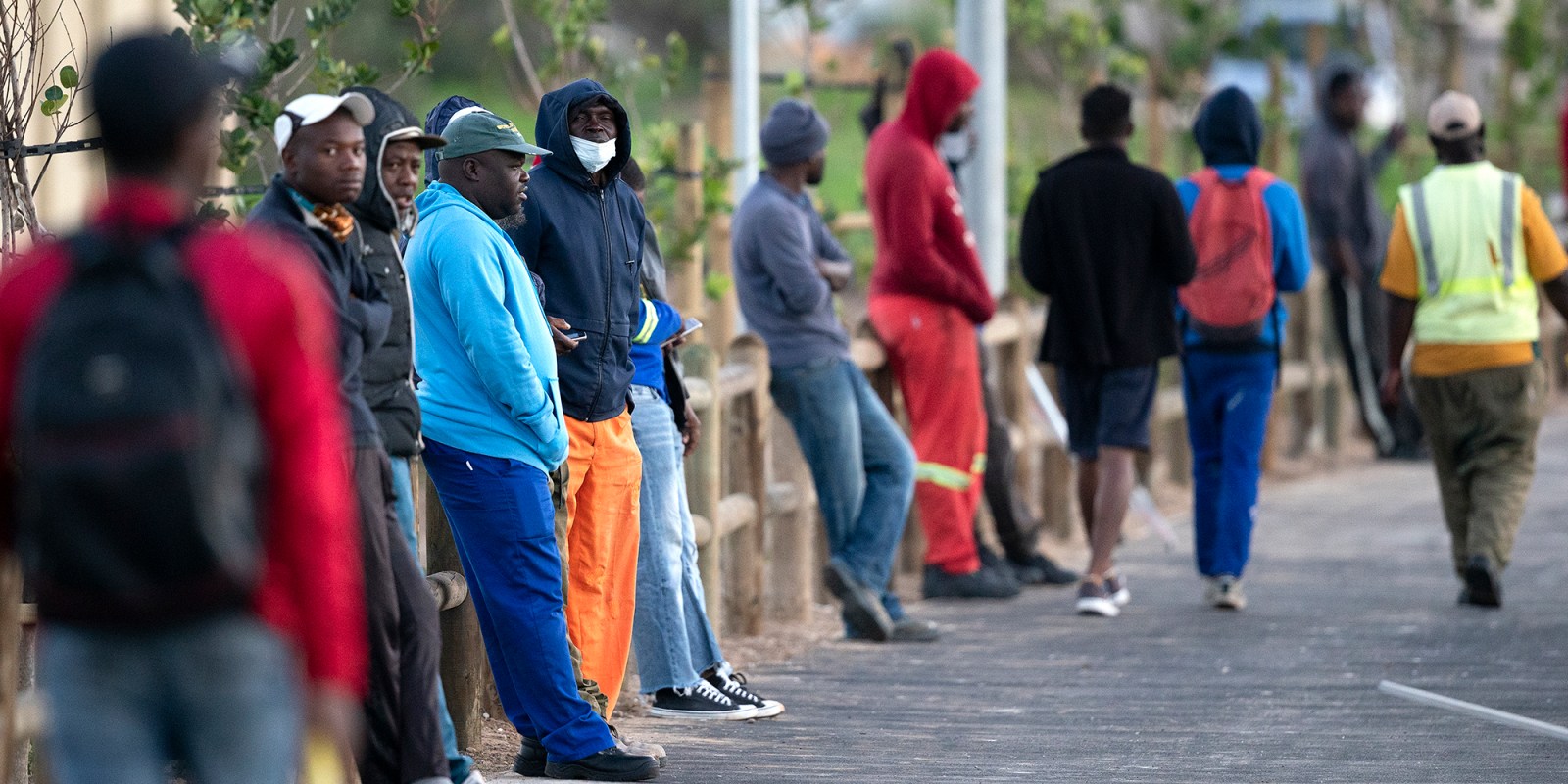 Men wait for work in the informal sector with about 200 other jobseekers at a road junction in Cape Town, South Africa. (Photo: EPA-EFE / NIC BOTHMA)

South Africa’s unemployment rate rose to a new record high of 34.4% of the workforce in the second quarter of 2021 , from 32.6% in the first quarter, Statistics South Africa said on Tuesday.

That translates to 7.8 million jobless people, 584,000 more than in the first three months of the year. The expanded definition of unemployment, which includes those of working age who have stopped looking for employment, rose at 44.4%, or 12 million people.

The formal sector, which accounts for more than two-thirds of total employment, was the hardest hit, bleeding 375,000 jobs between April and June. Losses were mainly in the finance and services sector, which shed 278,000 jobs. Other sectors showed modest employment gains. Construction added 143,000, agriculture close to 70,000 and the informal sector 184,000.

South Africa’s unemployment rate is now nearly 10 percentage points higher than it was a decade ago, and while it remained just below the 30% mark for most of that period, the coronavirus has seen it soar.

Analysts fear it will be difficult to reverse the job losses due to the structure of the economy and the labour market.

“This is a shocking number. And it’s only for the second quarter, so it does not include the severe lockdown period during the third wave and the unrest in July. So we can expect unemployment to take a further knock going into the third quarter,” said Maarten Ackerman, chief economist at Citadel, adding that the figure was the highest among 82 other countries monitored by Bloomberg.

“This number will keep increasing because the population is growing faster than the economy. That implies that what we saw in July, the social unrest on the back of inequality and poverty, is not going to disappear. It’s an urgent warning to the government,” Ackerman said.

Typically, even when economic growth recovers after a recession, most of the jobs lost during that are never recovered. That will be made even worse by the growing gap between the labour force participation and labour absorption rates – the gap between those entering the workforce and the economy’s ability to absorb them.

“The gap has been widening for the last decade, and in this quarter it has risen by 5.5 percentage points to a gap of nearly 20 percentage points,” Statistician-General Risenga Maluleke told Business Maverick. Maluleke said the headline unemployment figure was worsened by the fact that with easing Covid-19 restrictions, more people were looking for jobs.

“We’ve seen a large number of people coming out of the not economically active category. Due to Covid-19 many of them stayed home but now they are actively seeking employment.”

Gross domestic product (GDP) growth is set to be faster in 2021 after 2020’s record 7% contraction, but beyond that the economy is set to return to slower rates of growth below 3% – the absolute minimum level of output needed to ease joblessness and poverty, as well as rising discontent that underpinned the violent riots and looting in July that led to at least 350 deaths.

The government, civil society and trade unions are at odds over what path to pursue to deal with sky-high unemployment and the lack of growth.

Calls for the introduction of a universal basic income grant have have risen to a crescendo, and while National Treasury has partly acceded by reinstating the R350 relief grant up until March 2022, new Finance Minister Enoch Godongwana has called for a focus on skills training and public works jobs while maintaining stricts controls on spending.

“You’ve got a combination of a fiscal framework of austerity, plus the depth of corruption, and the administrative gridlock – these are the realities that completely confound and undermine the notion that a massive jobs programme, either public or private, is going to be rolled out in the short term,” said Neil Coleman, co-founder of the Institute for Economic Justice.

“Remember, the Treasury programme for structural reforms estimates that it will create a million jobs in 10 years. That’s 100,000 jobs a year, nowhere near the number of work seekers coming into the labour market  every year. It’s a recipe for disaster,” said Coleman. BM/DM