Reflections of a Wayward Boy: A diet of bananas on the...

Reflections of a Wayward Boy: A diet of bananas on the cusp of history in Spanish Guinea 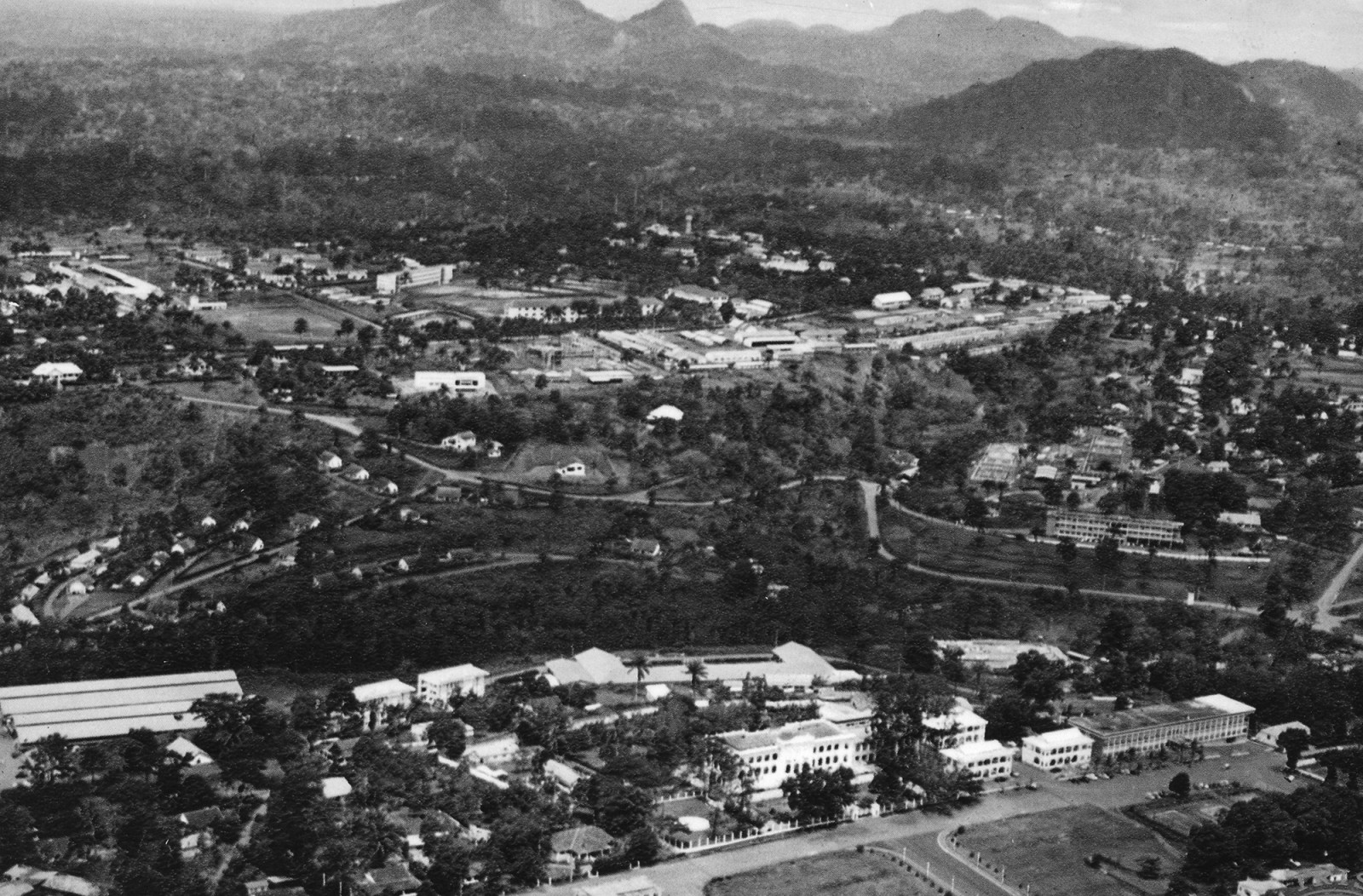 Fascinating as the island of Fernando Po (now Bioko) was, with its sea-breached volcanic crater harbour, loomed over by the lushly green-decked bulk of the Pico Basilé (formerly Pico de Santa Isabel) mountain, its history and its people, Barbara and I had no intention of staying for longer than two days. Two months later, we finally left on a scheduled 36-hour flight to Ndola in Zambia where we finally arrived, six days later.

As our Guinean friends had told us, it was an inexpensive, 20-minute aerial “hop” from Santa Isabel (now Malabo) to Douala. And then a slow, rickety ride to the inland capital of Yaoundé on Cameroon’s only railway.

There we discovered two facts in quick succession: one, Cameroon, in the French franc zone, was incredibly expensive; and two, hitch-hiking overland was out of the question, not only because of a lack of transport, but also because of ongoing conflicts.

We had apparently arrived at a cul de sac when Moïse Kibassa-Otoke, an official with Air Afrique, gave us a lift as we hitched on the outskirts of Yaoundé. He arranged for inexpensive (“one night only for non-mish”) accommodation for us at a missionary hostel and, over dinner at his home, suggested the solution: we could take the weekly Air France flight from Douala to Kinshasa, with a connecting flight the following morning, to Ndola in Zambia.

That night Barbara and I calculated that if we transferred all our remaining savings from England, we could cover the cost of the flight, but with very little to spare. So we headed back to the low-cost regime of Fernando Po via three inexpensive, fascinating and informative days staying with a family in Douala’s frequently rebellious Bonaberi shantytown. We were sure that once we got a letter off to the bank in London, it would only take a week or two for the bank draft to arrive.

The letter was duly typed in the office of the Ambas Bay Trading Company, a mercantile enterprise that seemed to have been transplanted, almost unchanged, from a century earlier. In its warehouse at the harbourside, the company stocked the most amazing variety of goods and did a brisk trade with men who arrived at dawn in extraordinarily large dugout canoes that departed, heavily laden, as night fell. To me, it seemed the only real difference between the smugglers of 1888 and 1968 was that the canoes now sported powerful outboard engines.

Managing and sole director of this apparently forgotten remnant of the trading posts that once dotted the West African coast, was Sydney Dunn. An affable man, he doubled as the honorary British consul and was the only diplomatic representative on the island. He was only too happy to allow me to use a vacant desk and spare typewriter in his office. And he agreed to honour the bank draft I asked to be sent poste restante, to Santa Isabel, Equatorial Guinea.

By that stage, we were very low on funds and the rental of a room was essential. But since we thought it would only be a matter of a week or two before the bank draft arrived, we decided that, apart from a shared coffee and bread roll for breakfast, we would subsist on bananas filched from plantations on our daily walks to and from the airport, the only potential source of news that might be of interest to a wider audience. We also resolved to keep in reserve our last two £25 traveller’s cheques that would, if the draft failed to arrive, get us back to Europe.

As time went by, Barbara seemed to thrive on the banana diet, while I shed nearly 20kg. But we got to know more about the island, its people and history along with the complex political and social conditions as elections were held and el Gallo Rojo (The Red Rooster) Francisco Macias triumphed.

From memory, that event was covered by Kinshasa-based Mort Rosenblum of Associated Press, who had been granted a 48-hour visa by the Spanish overlords. Before he left, Mort appointed me as the AP “stringer” to send occasional news items via Madrid. There was not much interest in Equatorial Guinea, he said, but I could earn some pocket money that I could pick up when Barbara and I passed through Kinshasa on our way to Ndola.

So we continued with our daily walks to the airport, making notes of the selflessness and the all-too-frequent waste and hypocrisy of those involved in the aid business while checking daily to see if the bank draft had arrived.

In the process, we came across some truly unforgettable characters such as the elderly and delightfully boozy priest, Fr Redmond Walsh. From County Cork in Ireland, he had spent his entire adult life among the Ibo peasants and had been expelled by his bishop when it was discovered that he had helped his parishioners build a mobile munitions factory. And then there were Alfie and Sheila Scott, who helped us when we finally left the island and who became lifelong friends.

When, eventually, the draft did turn up, it was obvious that it had been sent first to the former French colony of Guinea and then, after some time, to Portuguese Guinea (Guinea-Bissau) before finally landing up at what was still, so far as most of the world knew, Spanish Guinea: I had apparently confused matters by jumping the independence naming gun. But at last, we had the money and booked our tickets at the only airline office, representing the Spanish airline, Iberia.

It was Alfie and Sheila who drove us to the airport on 15 October 1968 and saw us off on the “hop” to Douala with Alfie insisting that we take a small suitcase to create a better impression since all we carried was the shoulder bag we had bought in Madrid. “The case is just stuffed with some paper, but it looks better for each of you to have luggage,” he said.

This was to be the start of a 36-hour journey, stopping over in Kinshasa with Mort and Sue Rosenblum and then arriving in Ndola on the following day to look for work and contact the ANC and try to get some idea of what was happening in South Africa.

So with a shoulder bag containing all we possessed and a case full of crumpled newspaper, we arrived in Douala. “Finally”, said Barbara, as we settled into our seats in the Air France plane, “we’re travelling like normal people”. I had to agree. The many mishaps, largely of my own making, as we journeyed, by kayak, van, car and foot, were behind us.

And, as if to underline our newfound status, Barbara discovered, at the back of her seat, a 50 franc Belgian banknote. It triggered in me a bout of naïve optimism and I noted that the find was a clear portent of looming good fortune.

In my defence, there was no way I could have foreseen that a political murder and international politics would disrupt our journey. In the event, instead of 36 hours, it took the better part of a week, interspersed with two nightmarish episodes, before we finally arrived in Ndola late on the night of 21 October 1968. DM