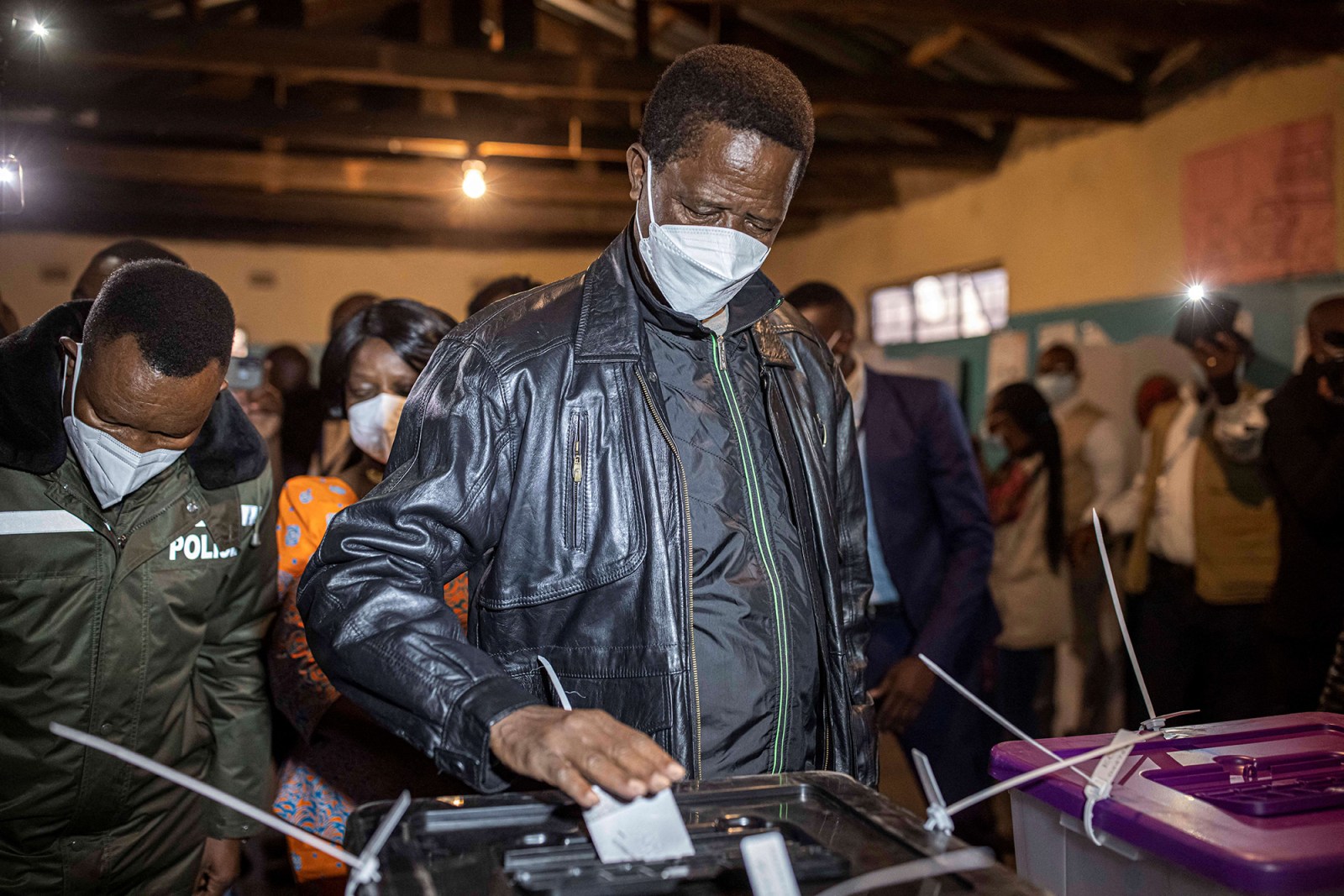 Despite the third wave of Covid-19 in Zambia, citizens turned out to vote in large numbers. The governing party was very visible on TV, the opposition not so much.

cast his vote in the presidential, National Assembly and local government elections held on 12 August.

“Right now, if you told me [I have the choice] to go stand in a queue or go home because of Covid,” he said, “either way, I can get Covid here and die, and I can go home and not vote and still die of hunger. It comes to the same thing,” he said.

Mwangi and his friend Pauline Gakunga (33) turned up at the Roma Parish Church polling station in Lusaka early in the day. After a few hours of waiting they took a walk and returned in the late afternoon with some snacks and a Mosi beer to find their place in the voting queue again.

Neither of the two had yet been vaccinated but said they would get the Johnson & Johnson vaccine – recently donated by the United States – after the elections, because it was just one jab, unlike the AstraZeneca, which is also available in the country but in two doses.

Gakunga said she missed going to physical rallies, which were banned in the run-up to the elections.

“We miss rallies because it felt like you’re more part if you are participating, but this time around it was not happening. We do still have the passion, because we feel it from the heart,” she laughed. “We are doing rallies in the heart.”

She also said she followed some of the campaigns on social media – mobile data in Zambia is slightly cheaper than in South Africa, with a gigabyte costing about R8 – and on television. Mwangi added, however, that “when you look at the national television, it’s just for the greens, the ones in power”, but said social media was less partisan. By lunchtime on voting day, however, WhatsApp went down in Zambia and could only be accessed through a virtual private network (VPN).

Observers have remarked that the governing Patriotic Front (PF) has been getting most of the airtime on the state-owned broadcaster, with opposition parties getting 30 seconds every day on television, often outside of prime time. Election watchers also said President Edgar Lungu and his ministers have found ways of getting around the Covid-19 restrictions by having public oversight inspections, which often attracted large crowds. Nearer the election, the PF was particularly visible on the streets of Lusaka. The day before the elections party cadres drove through the streets on big trucks playing music while distributing party T-shirts and chitenge (pieces of cloth) with Lungu’s face on them.

The opposition United Party for National Development’s (UPND) presidential candidate, Hakainde Hichilema, had similar “drive-by” campaigns, but nearer the election none of the red T-shirts worn by his supporters were spotted in the capital.

Another method employed by both sides to get around the strict Covid-19 regulations, which were not relaxed even as reported infections dropped, was to hold mass Covid-19 awareness and mask-distribution campaigns. On the afternoon of 12 August, Lungu also held a virtual rally – a slick affair involving artists, a gospel praise-singer and the incumbent himself delivering an almost-inaudible message while wearing a mask.

Hichilema’s pre-election day consisted of an address to international media in the morning, which was streamed on various social media channels as well as on a privately owned television and radio station.

There were also numerical restrictions on house-to-house visits by politicians, but two sisters who stood in a queue to vote for more than six hours on voting day said this wasn’t an issue for them.

“They came house to house,” said Ann Phiri (52). “UPND all came to our houses, and they were showing us how to vote on the [mock ballot] cards.”

She and her sister and niece were in a long queue outside a church, with very little physical distancing taking place. But they had all been vaccinated and weren’t afraid. Phiri said she believes “Covid is here to stay and you have to learn to live with it”. For that reason, she said, she was glad that voting had continued. She also pointed out that the Americans had run a presidential election during the pandemic at the end of last year, and had managed to see a change in administration. “We can do the same thing here,” she said.

Even though the government of Zambia has been rolling out donated vaccines to all ages, only a minority of the population has been vaccinated.

Most of the people who braved the queues implied that they were desperate to see a change in government because of a rapidly weakening economy in which the worth of their hard-earned kwachas was rapidly dropping. The economy has slumped because of several factors. None of the half-dozen small traders interviewed blamed this on Covid-19.

Government statistics indicate that the price of many local staples, like kapenta (tiny freshwater fish), has gone up by 50% in the past year.

There were rumours that Lungu supporters would try to postpone the elections because his health was faltering a few weeks ago. He even reportedly collapsed, but another source with inside information said Lungu ran a tougher campaign that usual to reach the same amount of voters as he’d done pre-Covid, and was simply exhausted.

Zambia has just over seven million registered voters. They turned up in healthy numbers, although the exact tally was not available by the time of going to press. The long queues on 12 August were both a function of the numbers – some young people said it was their first time to vote and they urgently they want to see change in the country – and the slow process of finding voters’ names on the roll.

Thomas Molony from the University of Edinburgh is running a project entitled “African Elections during the Covid-19 pandemic” (https://aecp.sps.ed.ac.uk/) looking at how the pandemic has affected outcomes.

With reference to the 2016 turnout, he said: “If turnout is significantly below 56.45% this year, then there will be a number of reasons that can explain this, and Covid should be included as one of those reasons.”

Voter turnout worldwide has declined during the pandemic. “But in Africa a number of countries have seen an increase compared to the average turnout,” he said. “Burundi and Togo are examples, along with Ghana, where there was an increase of more than 10 percent.”

Tanzania, the Central African Republic and Ghana have, however, seen lower turnouts.A variety of factors may influence voters’ confidence in going to the polls during the pandemic, he added. “Firstly, elections that were scheduled early on in the pandemic tended to be postponed, but as the pandemic has progressed countries have had more confidence in holding elections.”

Visible Covid-19 safety measures at polling stations gave voters confidence they could avoid the virus when going out to vote.

These regulations are, however, not always enforced. “In Zambia there are some suggestions that Covid-19 guidelines have not been strictly enforced across the political spectrum – to the detriment of an opposition challenging the considerable power of incumbency,” said Molony.

*Pseudonyms have been requested because people are reluctant to speak freely.