Deadly Delta: Virus variant seen as a downside risk but...

Deadly Delta: Virus variant seen as a downside risk but could already be a severe headwind 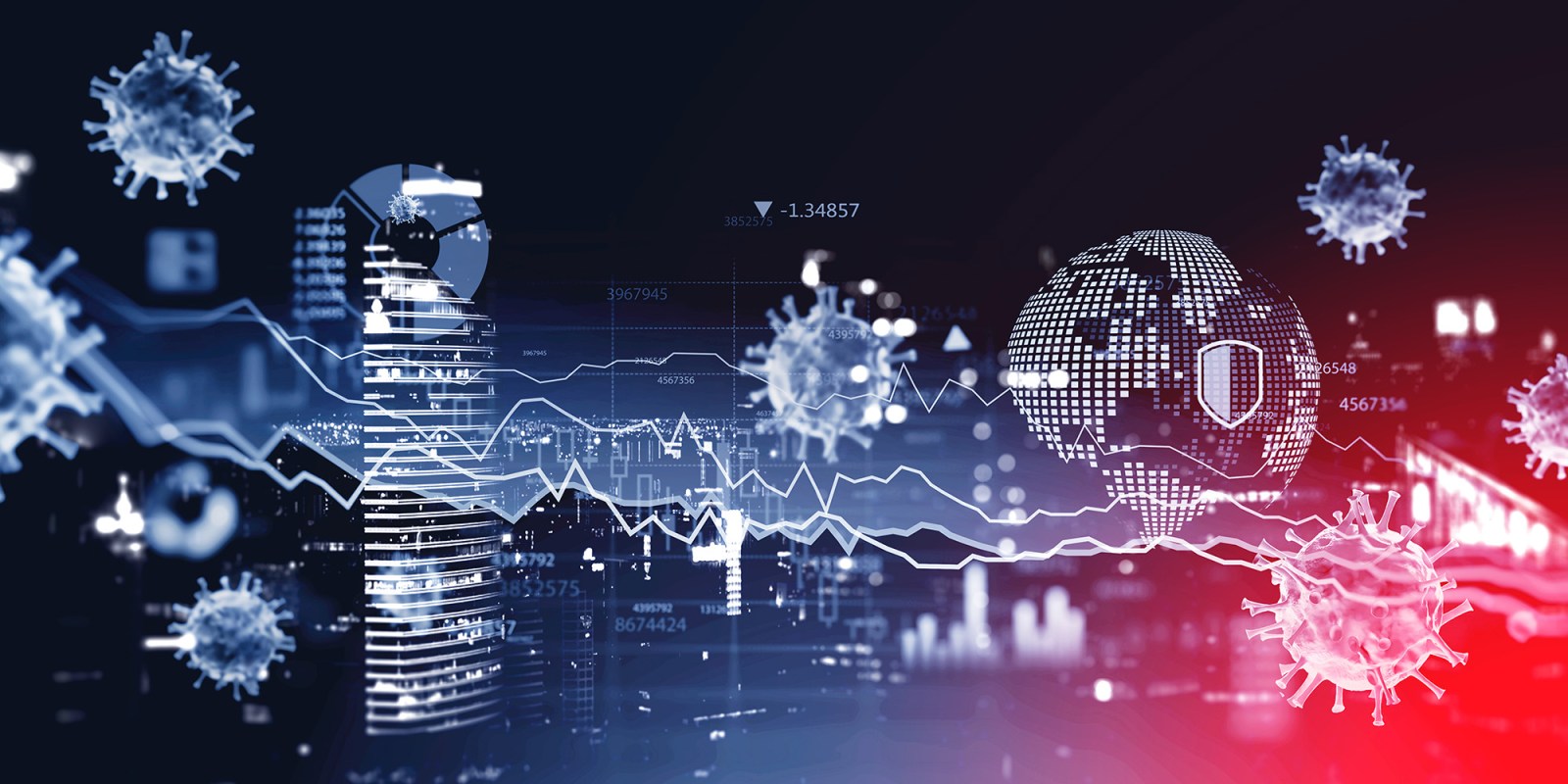 The impact of the Covid-19 Delta variant on the economy is surpassing inflation as the world’s most talked about known unknown. But views on the extent to which it will pose a drag on growth diverge significantly, and there’s little evidence to provide confirmation on which view may prevail.

In financial markets, it is the known unknowns that can be most disruptive because any indication – reliable or unreliable – of what could be expected often causes an outsized investor response. Such was the case late last week when Asian stock markets tanked but then retraced on speculation about the impact the Delta variant could have on the region’s economic prospects.

Of late, inflation has been the most scrutinised known unknown. But last week’s events highlight that it is fast being surpassed by worries about the Delta variant’s possible impact on the global economy. There’s a general acceptance that the Delta variant will impose a drag on the global economy, but views differ on the extent of the impact and whether it will stall growth.

As of now, there is very little evidence to go on. We have seen a deterioration in PMIs, with the US headline number coming in below expectations in July. But US jobs data surpassed expectations and Google mobility data shows that the number of visitors to retail and recreation venues continues to increase in the leading economies (see graph below). 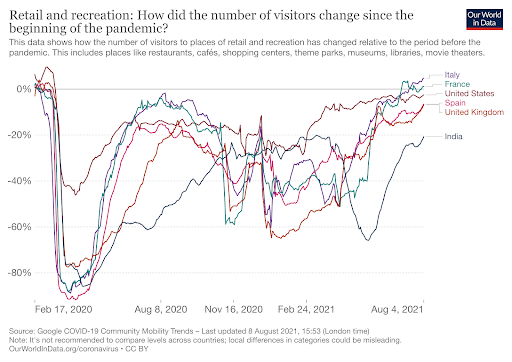 More revealing is how retail and recreation mobility compares with the beginning of the pandemic (as shown in the graph below). South Africa’s mobility had increased 1.3% on 4 August compared with the median level between 3 January and 6 February 2020 before the pandemic. US visitors to retail and recreation venues are still 2.6% lower, UK’s 8.6% down and Japan’s 12.7% in the red. Visitors in Germany are 4.4% up on the pre-pandemic levels. 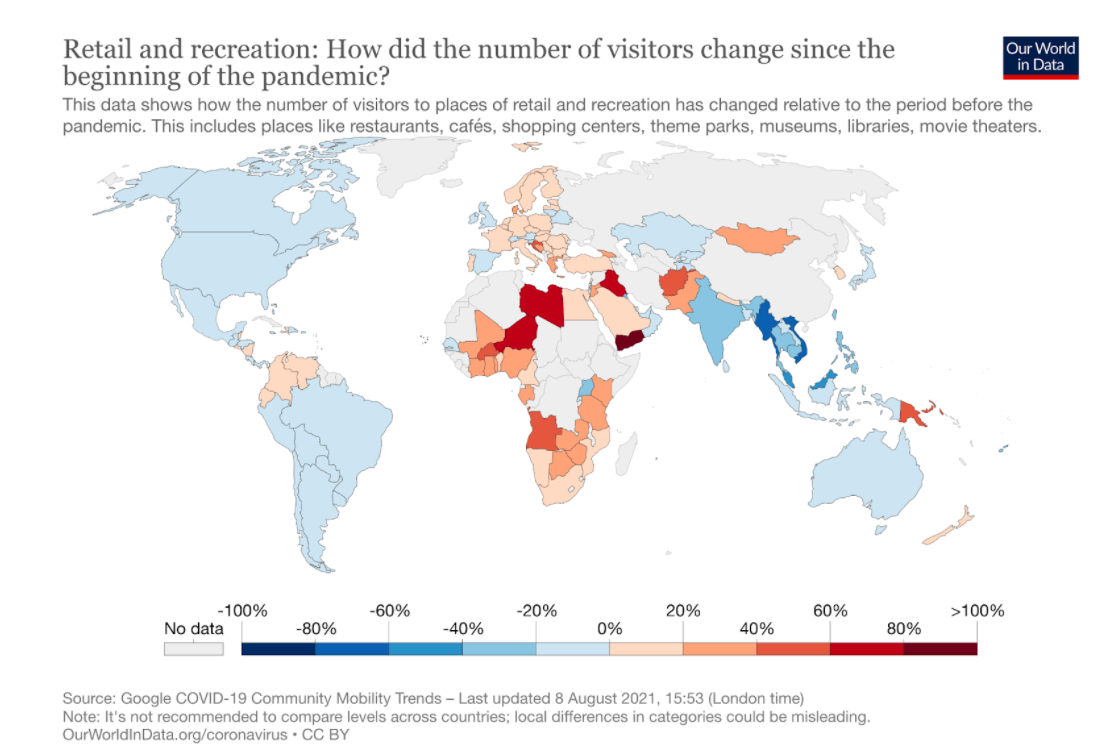 Many commentators are not expecting the impact of the Delta variant to be severe because, they argue, individuals and businesses have found better ways of operating than when the virus first appeared and they had to contend with lockdowns and other containment measures.

Expectations are also that the impact of the Delta variant on economies will depend on the extent of vaccination coverage in countries. Emerging markets, where vaccination programmes lag their developed market counterparts, are thus expected to experience a tougher economic time.

Of greatest concern has been the impact of the Delta variant on the Asian economies, where vaccine progress has trailed the Western developed economies. Supply concerns have also escalated in the region as various degrees of stay-at-home orders and other restrictions are hindering production across Thailand, Vietnam, the Philippines, Malaysia and Indonesia. Toyota has shut down three of its factories in Thailand because it has been unable to procure parts, and other multinationals across Asia are also experiencing severely curtailed activity.

The Brent crude oil price is also telling a different, more sombre, story, experiencing its biggest sell-off in four months at the end of last week as a result of the Delta variant appearing in China, and on expectations that global demand will contract as a result of the rapid spread of the virus.

Small businesses are also not as sanguine as the more optimistic economic and market commentators, with 76% of small business respondents surveyed in the Alignable August Recovery Poll expecting the Delta variant to hurt their recovery.

The fear of government closing businesses as a result of the Delta variant was cited as the number one concern in the survey, superseding inflation, which had been the top, and fastest-growing concern for small businesses over the past few months. 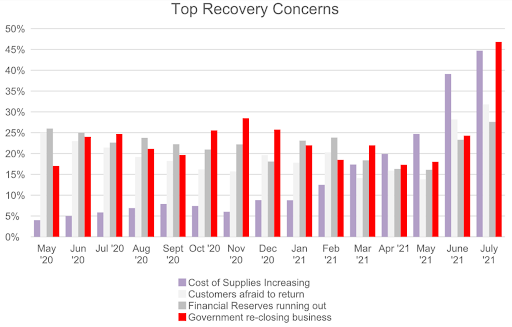 Also critical for growth and the other known unknown, inflation, will be the extent to which demand and supply are affected by the spread of the virus. If demand slows more than supply, inflation could well come off. However, if there is a proportionally bigger contraction in supply than demand as a result of the virus, the upward pressure on prices could intensify.

In the US, consumer confidence, as reflected in the Ipsos-Forbes Advisor US Consumer Confidence Tracker, is sending mixed messages. While the graph below shows it bounced back last week, reversing the previous week’s drop in comfort with household spending, Americans remained less confident that the economy will quickly recover after pandemic restrictions are lifted than they were two weeks ago, according to Ipsos. 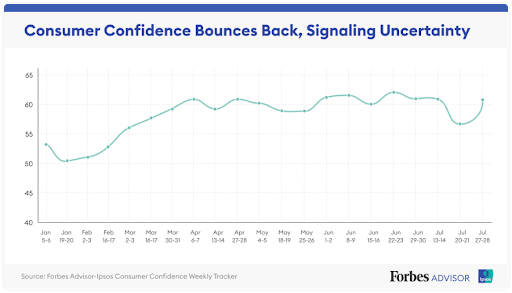 Goldman Sachs expects the direct impact of the Delta variant on the US economy to delay rather than reverse the reopening of the economy. But in Asia, the bank says tighter restrictions, which have included factory closures, are “raising the risk of negative spillovers at a time when supply chain disruptions are already at record levels”.

It notes that any setbacks in the Asia Pacific region could also pose upside inflation risk. “Port closures or stricter control measures at ports could also put further upward pressure on shipping costs, which are already very high.”

Through all of this, US Federal Reserve chair Jerome Powell has remained steadfast in his belief that inflation will remain a short-term phenomenon. But other Fed officials have become vocally more hawkish over the past couple of weeks. The prevailing thinking is that there is a good chance the US central bank could announce its tapering programme at the Jackson Hole Symposium in August. That will, however, depend on whether more concrete evidence on the US and the global economy’s health comes to light before then.

Given that the road ahead remains arguably more uncertain than ever, it’s anyone’s bet which view will ultimately prevail. However, making material policy decisions based on what is still likely to be a known unknown when central bankers meet later this month is akin to taking a shot in the dark – and is certainly not Powell’s style. BM/DM